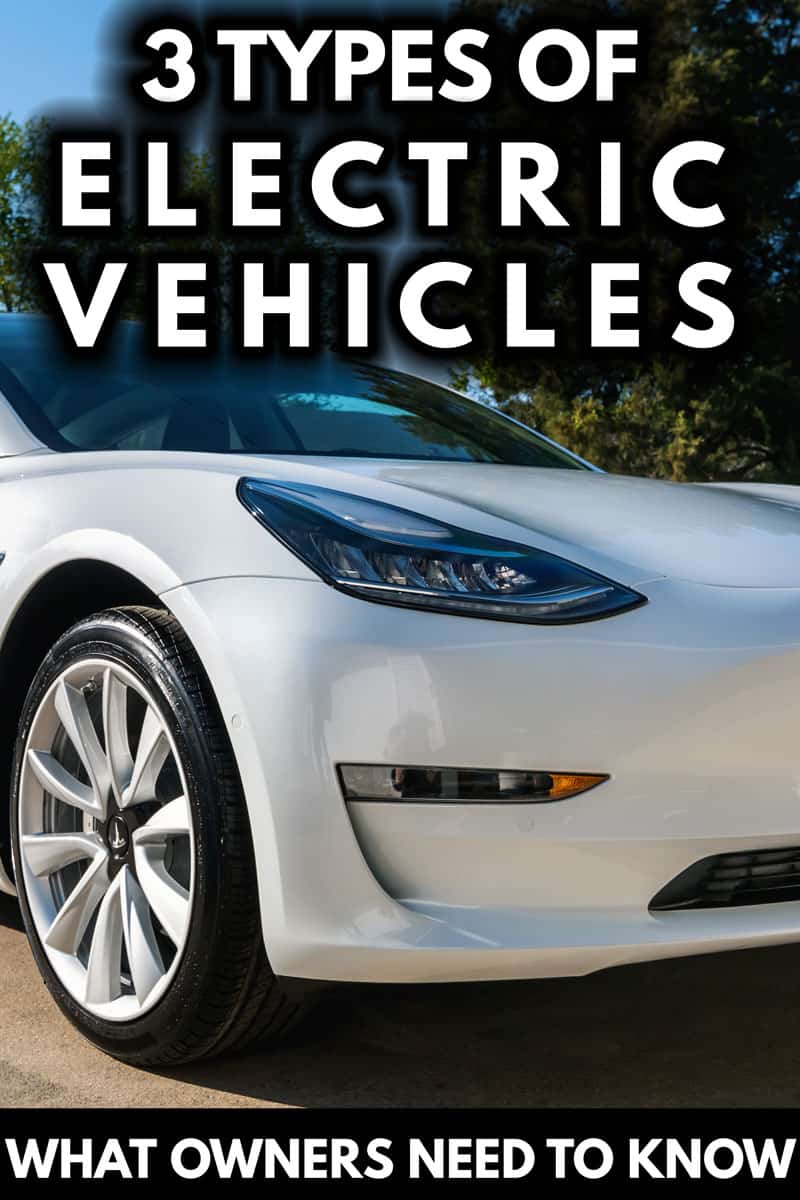 Electric vehicles (EVs) might seem like a new development in transportation technology, but it dates to the 1800s. Several inventors utilized electricity in their creations of cars. The first to develop the electric car that could be mass-produced was a British inventor named Thomas Parker in 1884. Other famous names in history, Thomas Edison, Henry Ford, and Ferdinand Porsche, contributed to the evolution of the electric car.

Today, there are three types of electric vehicles (EVs) -

Although the word electric is used in all types, each category has its unique way of using electricity as a power source.

History Of The Electric Vehicle

History indicates that Ford’s production line process and Model T car would deal a blow to the electric vehicle. Building an electric car cost about $1750 vs. the Model T around $650. The inexpensive gas-powered car, along with improved roads and access to crude oil, all but buried the electric car by 1935.

As gas prices soar in the 1960s and 1970s, interest in electric cars is renewed. The excitement fades in and out with some vehicles reaching the market, but perhaps the technology for mileage and affordability wasn’t quite there yet. And indeed, consumer interest was lacking. It isn’t until the 1990s that we see automakers begin to reintroduce electric vehicles.

Toyota released the Prius, the first mass-produced hybrid car in 2000. It’s considered to be a full hybrid, an HEV. In 2006 Tesla Motors—a start-up back then—announced plans to produce a high-end hybrid, BEV, sports car with a range of 200 miles.

A BEV is an all-electric vehicle. The sole source of power comes from the electricity that is stored in a battery pack and delivered to the electric engine. BEV's are entirely powered by electricity and do not have gas engines. BEV’s must be plugged into an external source to recharge. They can also recharge through regenerative braking—recovering energy when the brakes are used and when the car is stopped.

Recharging a BEV is easy and available through three different levels:

All charging levels will enable you to drive up to a range of 80 miles.

History Of The BEV

We mentioned earlier in this post that electric vehicles date back to the 1800s. There was a brief existence of BEVs in the early 1900s—picture a horseless carriage powered by a battery. Once gas vehicles prevailed, electric cars and carriages were dead. A couple of experimental vehicles came and went through the decades. But we’d have to wait until the late 1990s to have some success with BEVs again.

General Motors (GM) introduced the battery-powered EV1 in 1996. The EV1 was a two-seater with a 100-mile range released in California. This BEV was well regarded, but GM decided to stop selling it a few years later and focused on the gas-powered cars in their fleet.

Around this same time, though, Toyota and Tesla were busy creating and proving a market for EVs. Some might say that Tesla has paved the way and set the bar for efficiency

BEVs are cool, but they might not be for everyone, at least not yet. In fact, according to a J.D. Power survey, “a mere 4% of respondents have owned a battery-electric vehicle.”

Here are some considerations for a BEV:

Some examples of popular BEVs include the following:

Tesla Model 3: Considered a luxury car, the Model 3 is a best-selling electric vehicle in 2019.

BMW i3: This luxury BEV was unveiled in 2011, delivering style and grace. The BMW i3 also has an option to add a small gas engine.

Nissan LEAF: Quietly entering the market in 2011, the Nissan Leaf is award-winning. There are tow two battery size options and a lower starting price point in the BEV category.

Chevy Bolt: Unveiled in 2017, this Motor Trend Car of the Year can go the distance, reaching up to 259 miles.

There are at least a dozen models of BEVs on the market to choose from. Some are luxuriously reflected in the price, while others have a more affordable starting price point. As technology improves and popularity increases, it’s safe to say that BEVs are here to stay.

Hybrids aren’t a new concept. There were, in fact, quite popular in the late 1800s and early 1900s. The vehicles were charged with an external source of power but weren’t ‘plugged in’ like into a wall socket. We have Mechanical Engineer Andrew A. Frank to thank for that. He is known as the “father of the plug-in hybrid” he has dedicated his career to the evolution of hybrids.

A PHEV fits into the category of BEV and EV because it runs on an electric motor powered by a battery pack. But a PHEV also has an internal combustion engine (ICE) that requires fuel such as gasoline.

Like with the BEVs, the battery pack is recharged through regenerative braking that recaptures energy. And, like the BEVs, these cars can be plugged into a power source to recharge.

A charging station might be installed at your home or located in your neighborhood.

The plug-in hybrids and BEV’s share similar advantages and disadvantages.

Here’s how it breaks down:

Chevy Volt: Sadly, it’s been reported that 2019 is the last year for the Volt. General Motors (GM) will no longer manufacture this vehicle and its impressive mileage.

Chrysler Pacifica: The best of all worlds with plenty of passenger and cargo space in this fuel-efficient minivan.

Hyundai Ioniq: This plug-in version of the Ioniq is one of the most affordable plug-in hybrids on the market.

Porsche Panamera: Luxury, speed, and performance at its best. Porsche has been a pioneer in EV.

We've covered two of the three types of EVs thus far. Keep reading as we dig into the last type of electric vehicle, the HEV.

We have discussed in this post that some version of a hybrid vehicle has been around for a couple of hundred years. One still might think, though, that Toyota invented the hybrid.

In the late 1990s, the Prius was released as a full hybrid car. Toyota did make the modern-day hybrid a reality overcoming all sorts of obstacles. Millions have been sold worldwide. Honda beat Toyota to market with its Insight hybrid model back in 1999. Once it hit the market, though, Prius left the Insight in the dust. Prius is the HEV to catch.

The HEV category is almost as crowded as HPEV or BEV. It's no surprise that the most popular hybrids come from Toyota and Honda.

Here are the top cars in the category:

Toyota Prius: The king of standard hybrids. Prius led the way for hybrids and is widely popular to this day.

Honda Insight: Discontinued in 2014 for sagging sales, the Insight was reintroduced in 2019. It won Green Car Journal’s Green Car of the year.

We've covered a great deal of ground on electric vehicles. Most of the focus in the post has been on cars, not SUVs or pickup trucks. The market for EV goes well beyond the sedans we mentioned.

Talk about hot, hot hot...this category of EVs is one to watch. Ford and GM have been in control of this market for decades. Both are heavily investing in EV for their fleet of trucks. The Ford F-150 is expected to have an EV model roll out in 2021. GM has also committed to a BEV pickup truck, but it’s likely still a few years away.

Newcomer Rivian founded in 2009, is focused on bringing an all-electric pickup truck to market. With over a billion dollars raised in funding this year, they will likely bring it, no problem.

And of course, Tesla is in the mix with Tesla Truck. It’s a super competitive market. We will be on the lookout to see who reaches the market first.

Ford was the first car manufacturer to release a hybrid SUV with the Escape in 2005. Non-electric SUVs are a favorite car to drive—they dominate sales. Car manufacturers have begun to invest in EV for their SUV fleets. They have followed Ford along over the years to fill up the category with hybrids, plug-ins, and all-electric cars as options.

SUVs don’t have the same fuel efficiency as smaller, lighter cars, but they still have better gas mileage than the SUVs that aren’t at least partially electric.

Demand is growing in the SUV category. Honda, for example, is releasing a hybrid version of its best-selling CR-V in 2020. The Toyota RAV4, another best-seller, has had a hybrid choice since 2016. Mitsubishi offers one of the world's most popular electric SUV's, the Outlander PHEV.

Compact, mid-size, and large SUVs from several manufacturers are on the market today. And, the luxury market for SUVs gets more interesting all the time with Tesla leading the electrically charged race.

Electric Semi's Are In The Works

Daimler is the leader in the electric Semi category, with Tesla not far behind. The eCascadia, based on the heavy-duty long hauling Freightliner Cascadia, starting shipping in August 2019. It’s powered by a battery-electric powertrain with a 550-kWh battery pack and expected to get up to 250 miles. Recharging is anticipated to be quick, within a couple of hours.

eCascadia is due to go into production in 2021. For now, the electric semi is limited to a "Freightliner Innovation Fleet." Penske and NFI, two large trucking companies, will put the eCascadia to use in real-world working situations and provide feedback.

The Future of Electric Vehicles

EVs have come along way over the centuries. Prices for EV’s are coming down, mileage ranges are going up, and tax incentives are generous. Charging stations for electric cars are beginning to pop up all over, even in more rural areas. And, investment in electric vehicles is more than healthy.

These green-friendly vehicles play a more critical role in the world every day. The marketplace is flooded with choices to suit any lifestyle and any budget. Whether you choose from the array of EVs available, the all battery, plug-in, or hybrid, you will be contributing to a cleaner environment. You will also be ahead of the game. At some point, there will be a consumer shift, and it will go to electric.