Despite its name, antifreeze is a critical element to help prevent overheating from car engines. It can also help prevent damage to engines from cold weather. But you might notice a puddle of green, orange, or pink in your parking space that indicates an antifreeze leak. So what could be the cause of antifreeze leaking from your car? We looked into this matter and here’s what we found.

A blown head gasket, radiator hole, or damaged attachment points can become the primary causes of antifreeze leaking from cars. Vehicle owners should identify the source of the problem before attempting to pursue part repairs and/or replacements. Sending the vehicle to a trusted automobile repair shop should be a priority if the car owner doesn’t know how to repair antifreeze leaks.

Also, don’t confuse antifreeze with coolant even though both solutions go into the same container. Keep reading to know about the difference between these two vehicle cooling treatments. We’ll also tackle the causes of antifreeze leaks in greater detail. 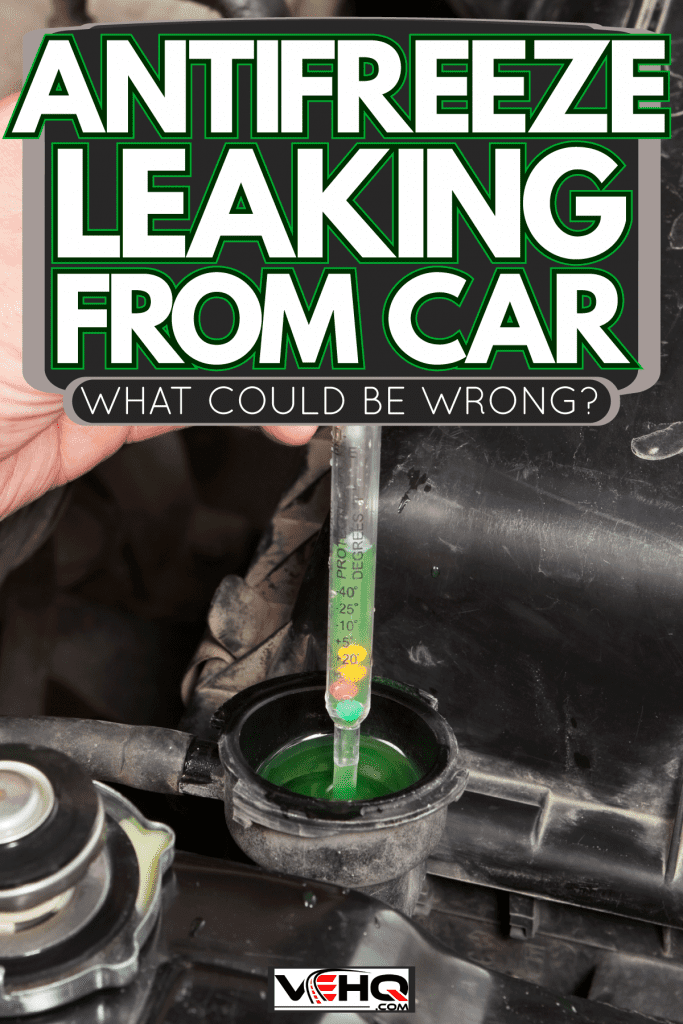 What Causes Antifreeze To Leak From Your Car?

Despite the varying origins, the result of antifreeze leaks will always result in damages to engines. Antifreeze leaks can come from different sources, including:

Antifreeze can leak regardless of the vehicle’s running status. It can seep from its container even when the automobile is at rest. If so, the problem might be because of a bad radiator, damaged water pump, or torn hose. 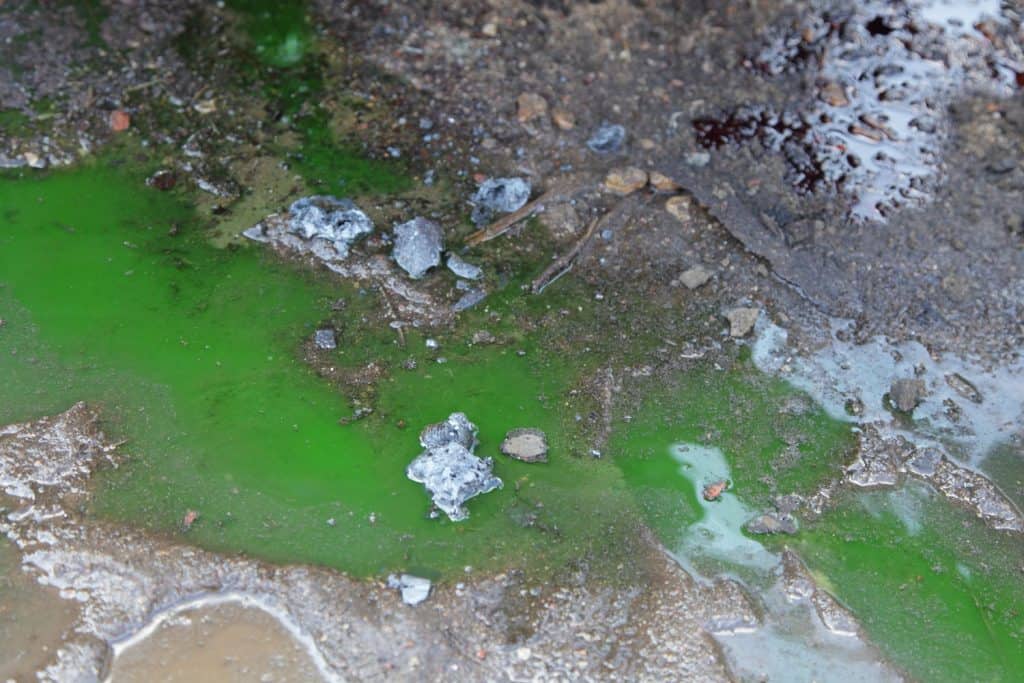 Watch the video below for an additional explanation on why your car might be losing antifreeze at a faster rate than usual:

You can also read this post to learn more about antifreeze for vehicles: "What Is Antifreeze Used For In Cars?"

How To Fix An Antifreeze Leak?

Before proceeding, take note that a car owner attempting to fix an antifreeze leak should have a deep understanding of the repair job. Additionally, the individual should be quite confident in their automobile-handling skills. It’s best to consult the help of certified technicians if these two criteria aren’t met.

Also, the first step to fixing an antifreeze leak is to find the source of the problem. For example, repair or replace the gasket or radiator if these parts are the ones at fault.

In the following guide, you’ll learn how to replace a faulty car radiator to fix the antifreeze leak.

Step-by-Step Guide to Remove the Radiator

Start the operation by parking your vehicle in a well-lit area. If a parking site with a sufficiently bright light isn’t available, you may need to use a flashlight, torch, or other lighting devices. Then, follow these steps to remove the car’s radiator:

Keep in mind that if you fail to locate and remove the radiator from your vehicle, stop the attempt to fix the antifreeze leak immediately. Instead, consult professional help for the remainder of the repair job.

You may also watch the video below to see the steps to replace a radiator in action:

Check out this car radiator for certain Ford vehicles on Amazon.

How To Refill Antifreeze In A Car? 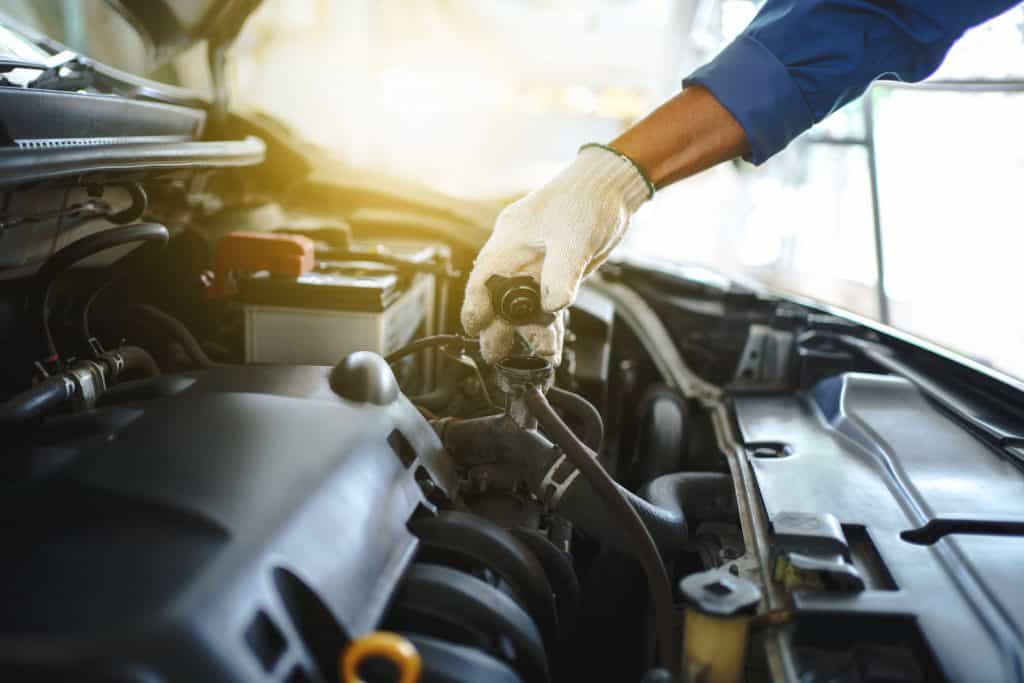 Remember that part of the process of fixing antifreeze leaks is to give your car a fresh batch of the cooling solution. Follow these steps if you’re filling your car with fresh antifreeze:

Take note that this operation will have extra steps if you’re doing an antifreeze or coolant flush. That process requires the emptying of leftover cooling solution before refilling it with a new batch. You can watch the video below for a quick tutorial on how to do a quick flush for your car:

Is It Safe To Drive If Your Car Is Leaking Antifreeze?

It’s still safe to run your car if it’s leaking antifreeze, albeit it’s going to be fairly unsafe. Driving with this problem can lead to more serious problems, such as damaging parts like the connector rods, cylinder head, and head gasket.

You should drive your vehicle to the nearest parking site or trusted automobile repair shop to check for the signs of antifreeze leaks like:

How Often Does My Car Need Antifreeze? 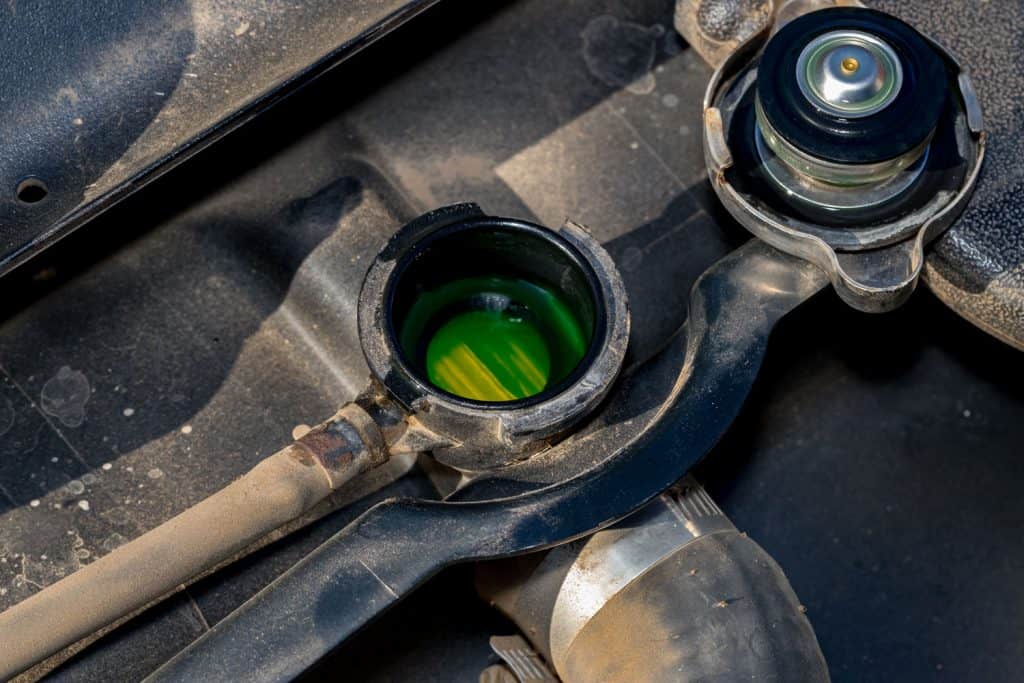 Consult your vehicle owner’s manual for the recommended period to refill your car’s antifreeze container. As each vehicle has different parts and constructions, various automobiles usually have dissimilar antifreeze requirements.

However, check and refill your car’s antifreeze content at least twice per year. Additionally, the best times to do so are before the summer and winter seasons. For many cars, you can check the antifreeze levels by peeking at the solution's reservoir when you fill the gas tank.

You can also read this post if you don’t know how to check your car’s antifreeze: "How Do You Check Antifreeze/Coolant Level?"

Check out this car antifreeze on Amazon.

Are Antifreeze And Coolant The Same Thing?

Antifreeze and coolant aren’t the same, although many car enthusiasts and experts often use these terms interchangeably. Antifreeze usually comes from ethylene glycol or propylene glycol. On the other hand, coolant is generally a 50% antifreeze and 50% water mixture.

Furthermore, the antifreeze will generally have corrosion inhibitors, preserving the life of different parts like the radiator and water pump. Take note that different antifreeze solutions often use various ingredients. Filling your car’s engine with the wrong product can promote disastrous results.

You can also add a relatively small amount of antifreeze on top of the coolant. Doing so may help improve the car’s cooling system. But don’t add more than the advisable amount. Otherwise, both treatments might not mix properly.

How Much Does It Cost To Fix An Antifreeze Leak?

Automobile owners should expect to spend money within the range of $77 to $145 for specific part repairs and replacements, along with professional labor to fix antifreeze leaks. Service packages from different car repair shops differ. Still, some of the specialized assistance that might be included are radiator replacements, replacing cooling fans, and engine cleaning.

Antifreeze can leak from cars even if you’re not driving the automobile. The source of this problem can come from different areas, such as the head gasket, radiator hole, or hose attachment points.

In certain cases, it's possible to repair antifreeze leaks using DIY techniques, particularly if the faults are reasonably minor. However, let professional technicians handle the repair operation if you’re not confident in fixing the seepage.

Also, avoid mixing different antifreeze and coolants. Consult your car’s manual before refilling it with cooling treatments. Flush your automobile’s coolant container or bring the vehicle to the nearest automobile repair shop if you mistakenly placed the wrong solution.