The Silverado 3500 has been a reliable diesel engine option for Chevrolet customers, being the 1-ton representative in the truck segment. However, one might wonder if the Chevy 3500 truck also comes with a gas-powered mill. We've done the research for you, and here's what we found.

Since its introduction in the early 2000s, the Chevrolet Silverado 3500 always came with a 6.6-liter Duramax diesel engine option. However, the American carmaker also gave the 1-ton truck a gasoline engine option during each of its four generations.

Would you like to know more about the gasoline and diesel engine options for the Silverado 3500? Do read on, because we've also prepared some helpful tips on deciding between a gasoline or a diesel-powered engine for your Chevy truck.

For many decades now, the Chevrolet Silverado has been one of the most popular pickup truck lines in America. The Silverado 1500, in particular, is the automaker's answer to Ford's best-selling half-ton truck, the F-150.

The Silverado 3500, in turn, is Chevrolet's flag bearer in the 1-ton truck segment. Although the "1-ton" classification traditionally indicated that a truck is capable of carrying one ton's worth of payload, the Silverado 3500 and its competitors have evolved significantly and can carry almost four tons.

In order to step up to the challenge, Chevrolet fitted the Silverado 3500 with very potent engines. As many Silverado owners and fans know, the most revered mill of Chevrolet's "Heavy Duty" (HD) trucks is the 6.6-liter Duramax diesel engine. 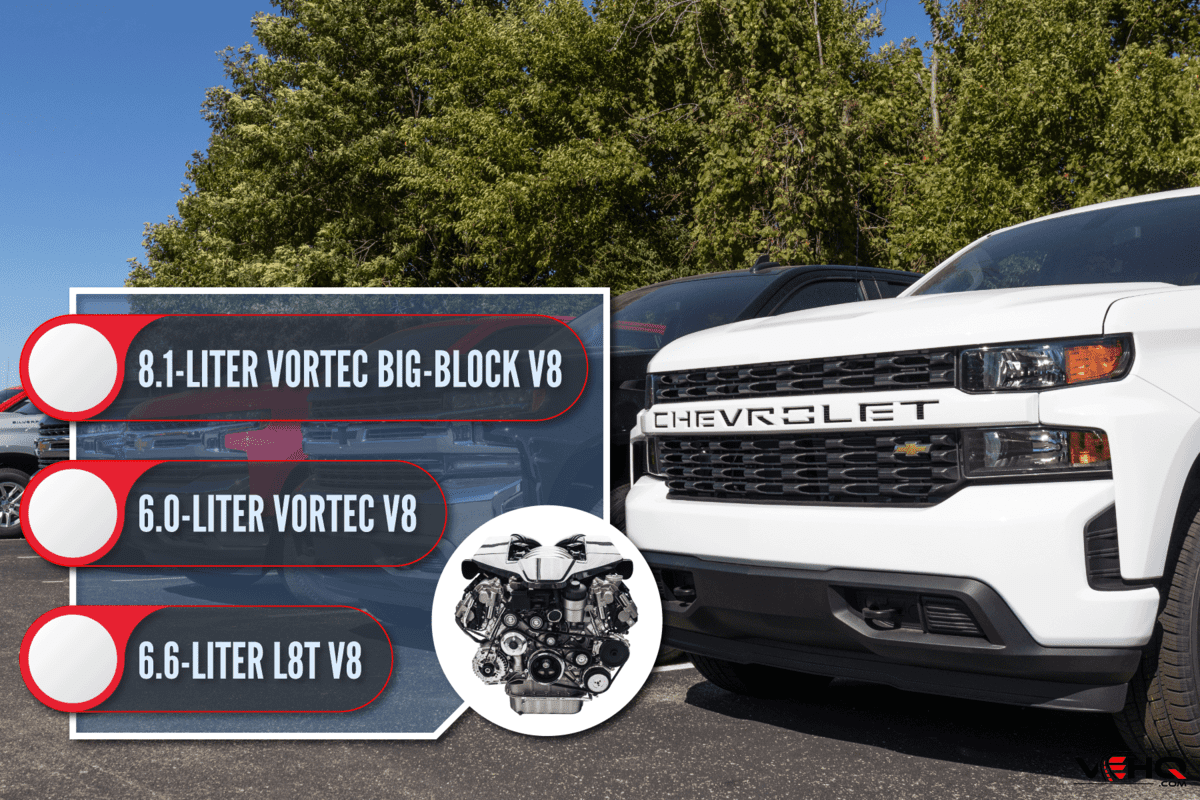 Just over two years after its inception, DMAX released its pioneer 6.6-liter V8 diesel engine called the Duramax LB7. This engine offered 300 h.p. and 520 lb-ft of torque to lead its class in leaps and bounds at the time.

The Duramax LB7 powered GM's HD (2500 and 3500) truck line, namely the Chevrolet Silverado HD and the GMC Sierra HD. Because of the LB7's unprecedented power and technology, truck buyers flocked to it. This engine raised GM's market share from only 5% in 1999 to an amazing 30% by 2002.

Duramax was the pioneer of aluminum cylinder heads, induction-hardened cylinders, and CRDI technology in GM vehicles. Over the years, DMAX developed several 6.6-liter successors to the LB7, up to the most recent L5P powering the current-generation Silverado HD trucks.

The Duramax L5P, introduced in 2017, can produce 445 hp and give a torque output of 910 lb-ft. As of today, the L5P is still the most powerful commercial Duramax engine ever built. Of course, we don't include the aftermarket-tuned ones in consideration.

What Are The Different Duramax Engines?

Here are the different 6.6-liter V8 Duramax engines that the Chevrolet Silverado 3500 used over the past two decades.

Building on the LB7's success, DMAX developed the LLY for use in the 2004 to 2005 GM HD vehicles. With a new valvetrain design, an exhaust-gas recirculation (EGR) system, and a variable-geometry turbo (VGT), the LLY produced 310 h.p. and 605 lb-ft of torque.

Boasting 360 hp and 650 lb-ft of torque, the LBZ caught the eye of meticulous diesel fans during its time (2006 to 2007). Because of new pistons and connecting rods, the LBZ could now withstand the strain produced by the increased power output.

Today, the LBZ remains a popular choice among Duramax fans because of the engine's reliability and proven durability, even with further aftermarket upgrades.

Because of the more restrictive emissions regulations in 2007, DMAX had to produce a cleaner-burning diesel engine. As a result, the 4th-generation Duramax LMM V8 (2008 to 2010) became the first-ever engine to use a diesel particulate filter.

Despite the power-reducing effects of the emissions restrictions, DMAX still managed to make the LMM more powerful than the previous LBZ engine. To be specific, the LMM can achieve 365 hp and put out 660 lb-ft of torque.

Due to DMAX's continual research and development about increased power output and decreased emissions, the company improved on the LMM's achievements and produced the LML from 2011 to 2016.

With a new and more durable design, the LML managed to put out 397 hp and 765 lb-ft of torque. Despite the added power, the LML still adhered to emissions standards thanks to a new urea-injection system, B20 diesel fuel compatibility, and a higher-pressure fuel injection system.

More power output generally results in faster engine deterioration. DMAX knows this well, and for the first time, they produced a tuned-down 6.6-liter V8 to run in parallel with the LML from 2011 to 2016. This more docile version of the LML was called the LGH.

Although the LGH was mechanically similar to the LML, the former had slightly lower outputs for one main purpose - longevity. For GM's trucks, the LGH gave 335 hp and 685 lb-ft of torque. In turn, the LGH produced 260 hp and 525 lb-ft of torque for GM's vans, like the Chevrolet Express and the GMC Savana.

The L5P, recognized as the most powerful version of the Duramax 6.6-liter V8 diesel engine, has powered GM's HD trucks from 2017 until today.

The L5P is DMAX's first total redesign of its 6.6-liter V8 diesel line, and it appears that the new design elements may stay for quite a while. As proof, the 2023 Chevrolet HD line will carry the L5P engine option for the 7th year.

If any future improvements come, we can expect better power, durability, fuel economy, and cleaner emissions. 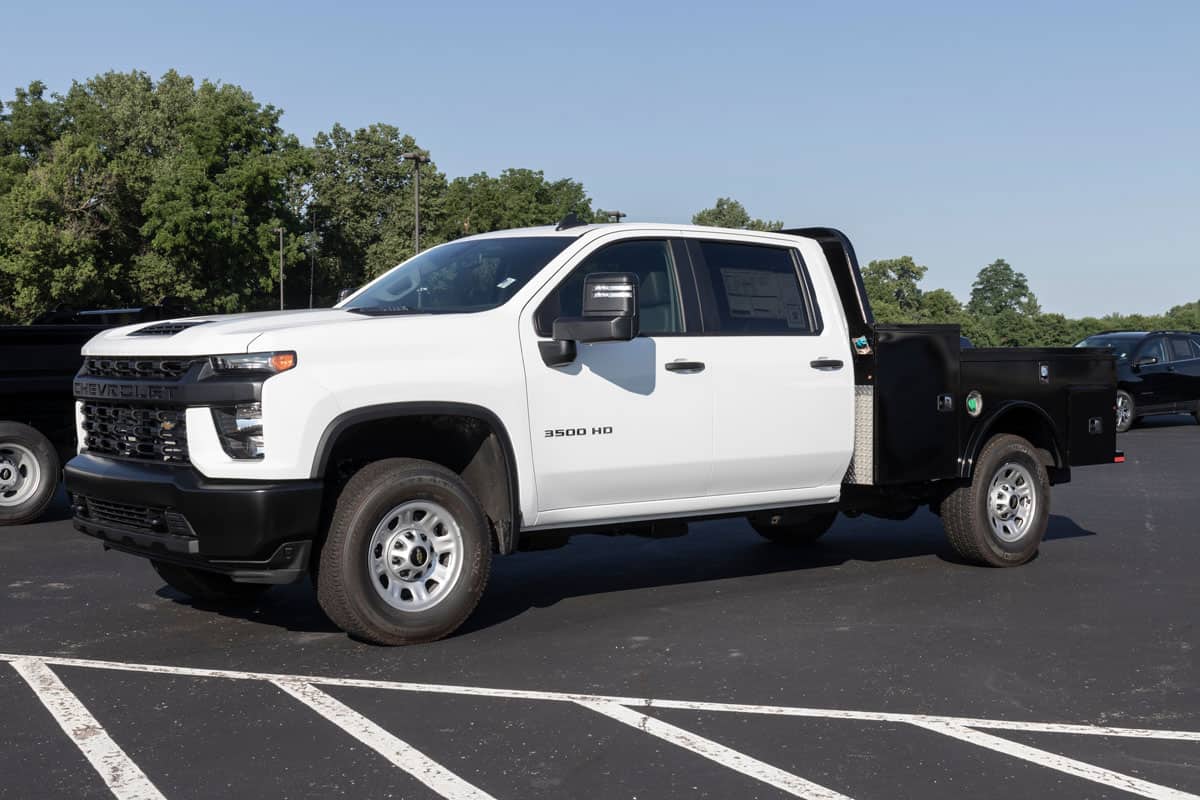 As mentioned earlier, each generation of the Chevy Silverado 3500 offers both a gasoline and a diesel engine option. Here are the gasoline engines and their respective performance numbers.

The 8.1-liter V8 had a higher horsepower rating than the LB7, but a slightly lower torque output. Of course, due to the big engine displacement and the large 3500 truck dimensions, the 8.1-liter V8's fuel economy was understandably much worse.

During its last iteration, the smaller Vortec V8 produced a respectable 360 hp and 380 lb-ft of torque.

For the current-generation 3500 trucks, GM developed a new, 6.6-liter L8T V8 gasoline engine. With aluminum cylinder heads and direct injection, the L8T can produce an amazing 401 hp and 464 lb-ft of torque - significantly more than the 6.0-liter Vortec.

Which is Better Gas or Diesel Trucks? 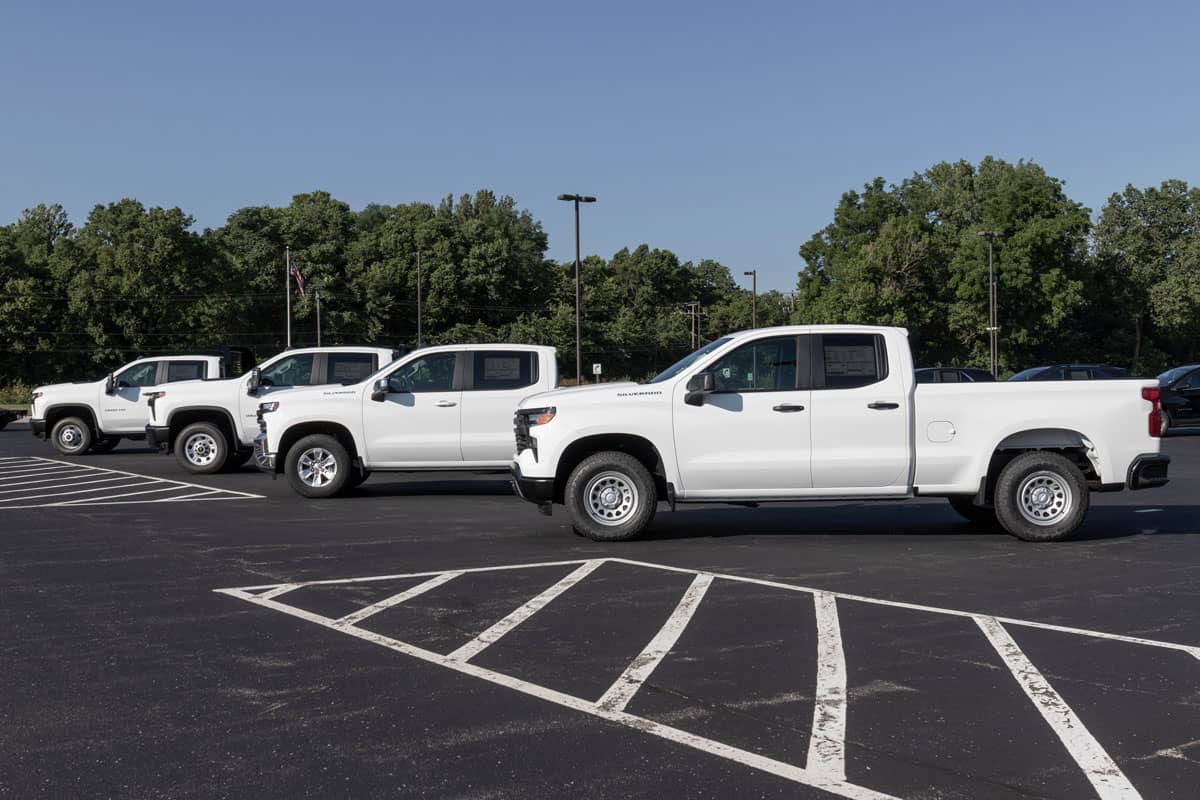 The battle between gasoline and diesel trucks will likely go on for a long time because both options have their pros and cons. If you wish to see which engine option is better for you, then you should base it on your own requirements and budget.

On the other hand, gasoline engines are often better in the following fields:

Check out this discussion among a few diesel experts to help you weigh your engine options better.

How Much Can A Chevy Silverado 3500 Pull?

A 2022 Chevrolet Silverado 3500 is capable of towing a maximum of 36,000 pounds. However, this tow rating can only be achieved with a specific combination of engine, drive configuration, body style, transmission, and towing package. 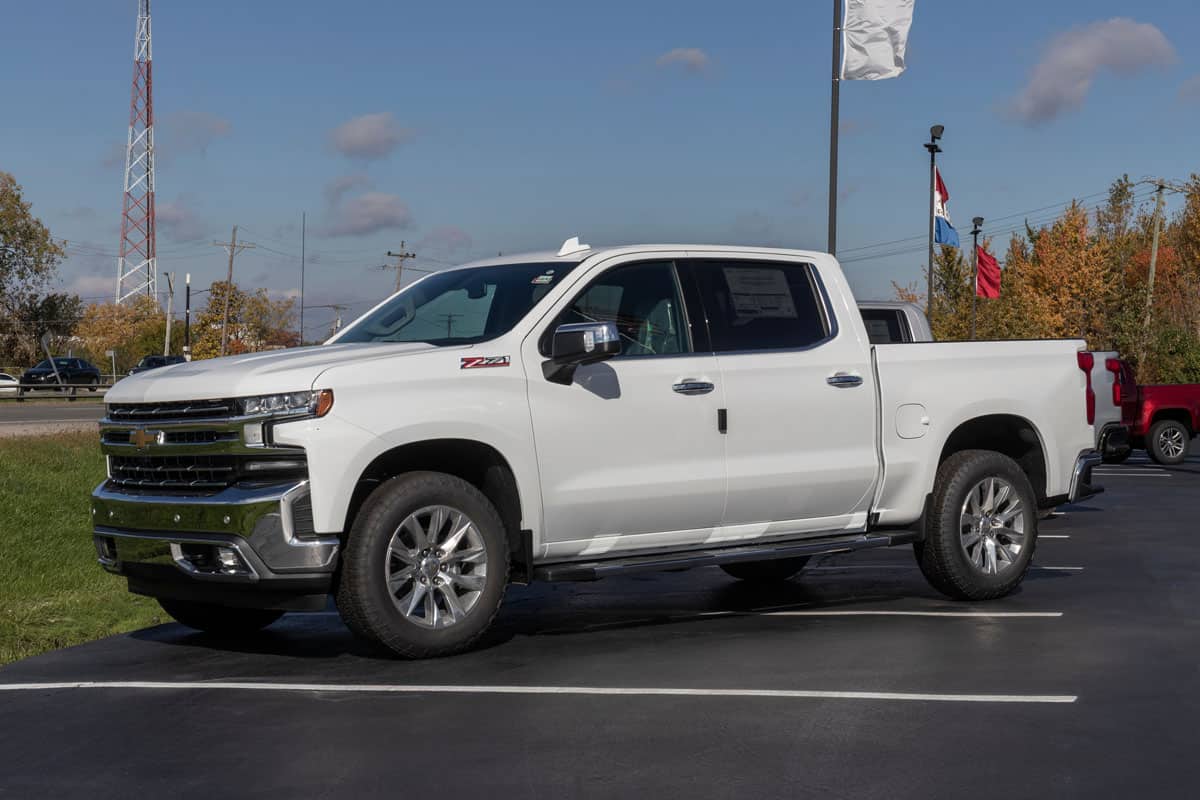 Here are a few select build options to give you an idea of the lower, middle, and upper price points of the 2023 Chevrolet Silverado 3500. 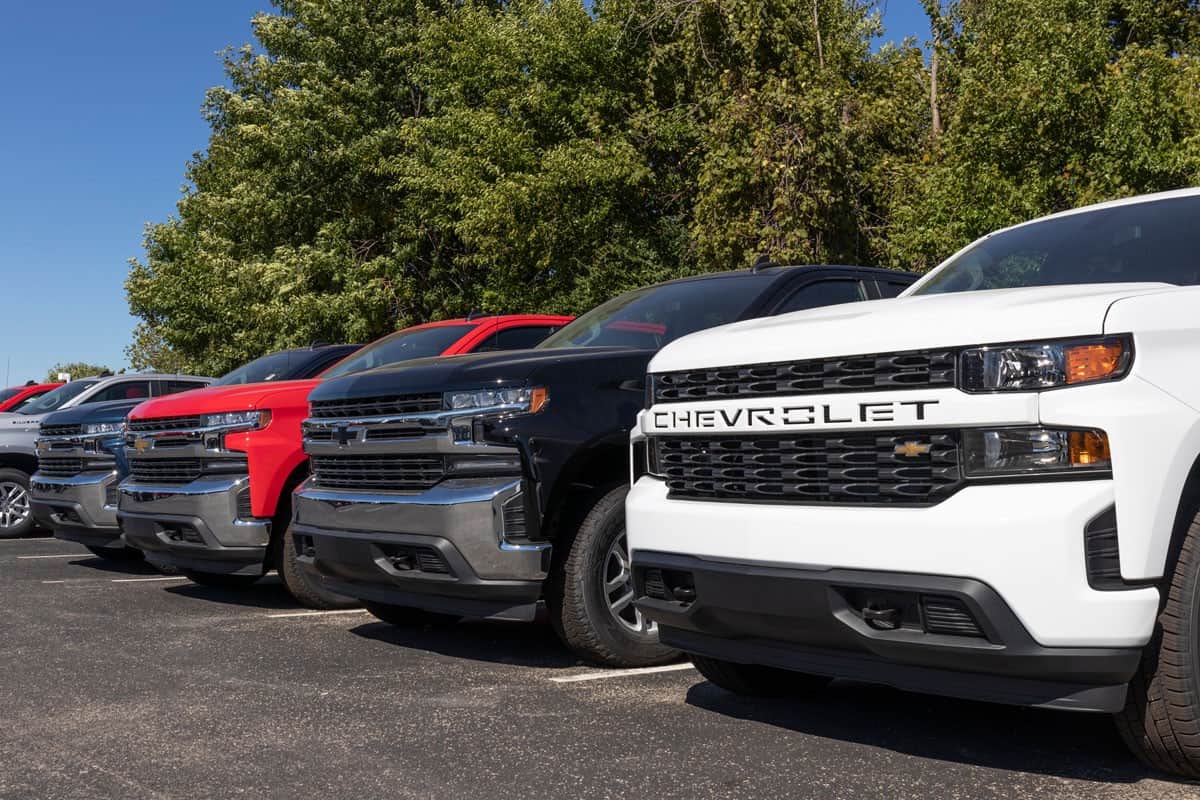 The Chevrolet Silverado 3500 offers both diesel and gasoline engine options. The Duramax 6.6-liter V8 is a perfect choice for the highest torque and towing capacity. For a more affordable price as well as a higher payload capacity, you may want to check the 6.6-liter L8T V8 engine option.

Thank you very much for reading. We hope this article helped you understand more about the different engines that power the Chevrolet Silverado 3500.

For more interesting reads about Chevy trucks and other automotive topics, you may also check out these great articles below.

What Is A Duramax?

What Are The Biggest Tires That Fit A Stock Trail Boss?