The Chevy Express van is a multipurpose, full-sized van manufactured by General Motors. These vans come in several different configurations to cater to the needs of a wide group of people. But, how does the van do in icy or snowy road conditions? Does it have 4WD to help get out of the toughest of situations? We have looked into this topic for you to bring you the answer.

No, the Chevy Express Van does not come with 4WD. However, the all-wheel-drive was only available in the 1500 series van that has been discontinued following US vehicle definition policies changes. As a result, all the current Chevy Express offerings are equipped with an RWD drivetrain only.

Chevy Express vans are configurable to a great extent, making them prominent in the enthusiast market. Campers use Chevy Cargo vans and build a motorhome in the cargo area. It is also quite known in the Overlanding community since the van has ample room for passengers and luggage and has the muscle to carry them over on longer journeys, including the rough patches, thanks to the AWD variants. Continue reading as we discuss the availability of the AWD system in the Chevy Express van and its other highlight features. 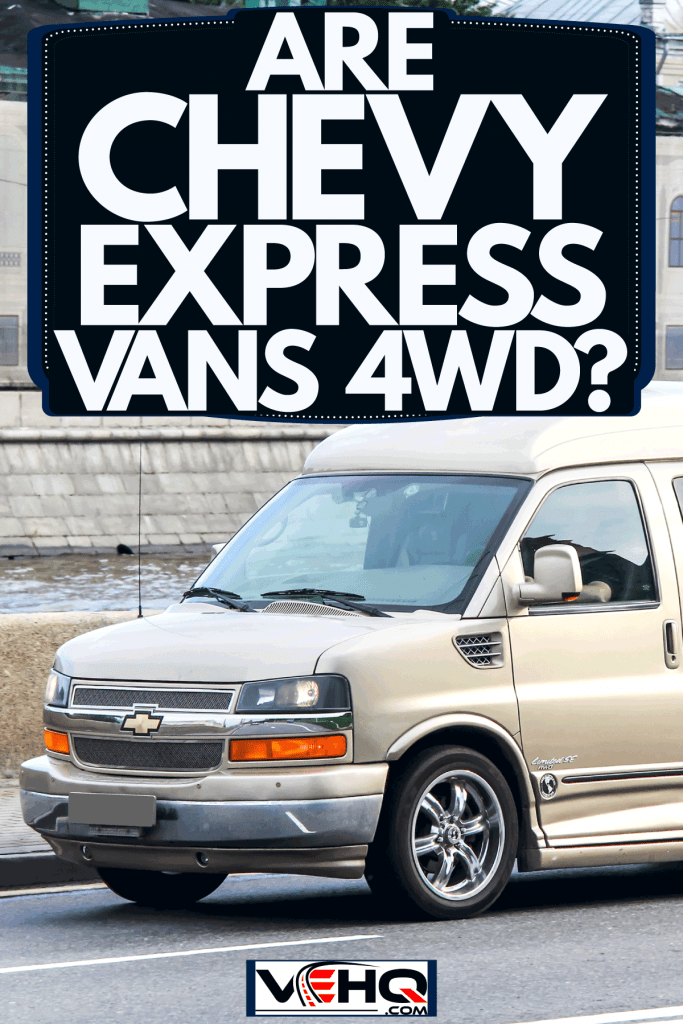 The AWD system in the Chevy is rear-biased and sends almost 65% torque to the rear wheels and the remaining 25% torque to the front wheels on default. In addition, the center differential could send further power to the front wheels if the van sensed any wheel slippage at the rear end. This AWD drive system made the Express van quite capable on rough off-road patches and in the snow.

Chevy Express has had the same shape and design since it was released back in 1996. It targets to attract people based on its functionality and reliability instead of its looks. The Express van can be configured as a passenger van to carry up to 15 passengers. It's excellent as a cargo van with a gross payload capacity of up to 3,920 lbs. for everyday commercial use.

Apart from the Express's reliability, comfort, and cabin space, it also does decently well in the powertrain segment. It has a capable V6 engine by default that sends 276 BHP and 298 lb.-feet of torque to an 8-speed transmission. As a result, the van does not feel underpowered with the standard powertrain, but you can also install a big V8 or a turbocharged I4.

All the offered engines are tough and reliable. They are equipped with an 8-speed automatic transmission by default, which helps produce enough wheel torque to get the car moving even on steep inclines and helps it maintain the engine RPMs nice and low on longer highway drives. When coupled with the all-wheel-drive on the older versions, the Express AWD is a capable vehicle both off and on-road without breaking the bank. 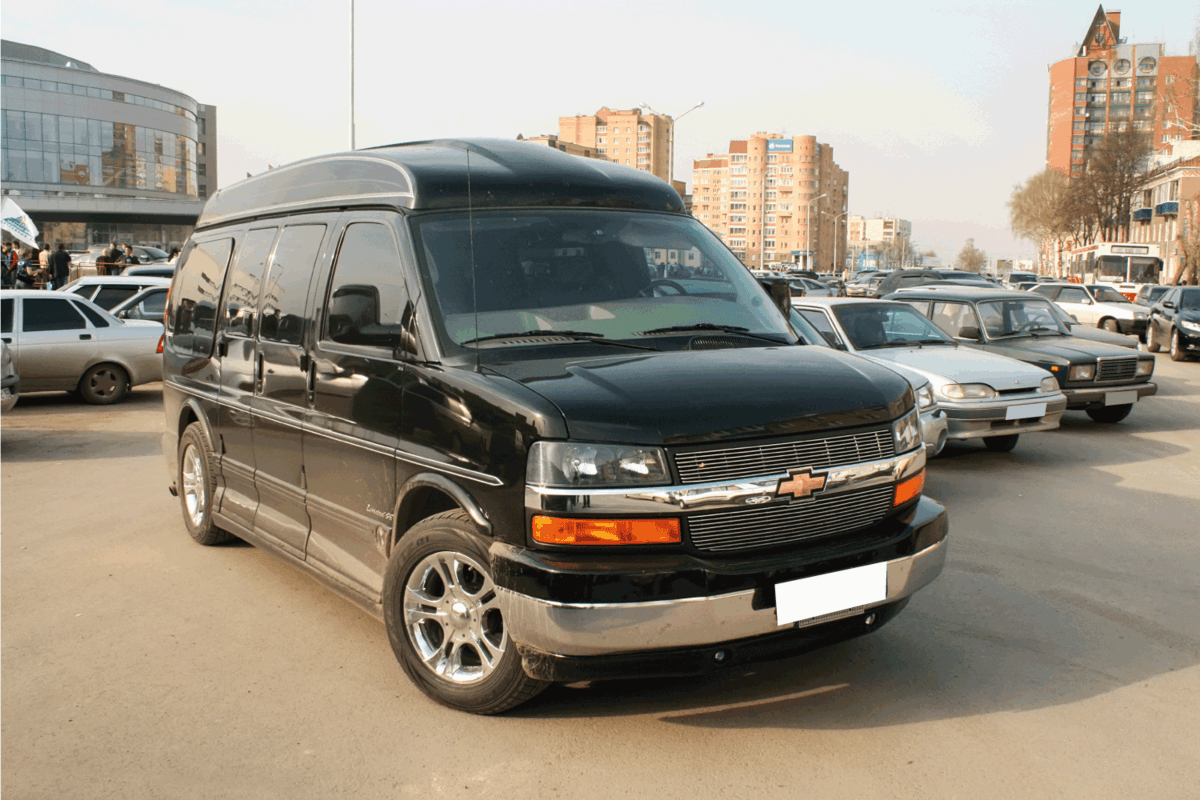 What's The Difference Between AWD And 4WD?

Do not confuse the 4WD system in these vans with AWD drivetrains. An all-wheel-drive-equipped vehicle sends power down to all four tires at all times. In addition, it provides the flexibility to the lateral wheels to move at different speeds than one another, which makes it more suited for urban vehicles that might undergo a bit of off-roading.

Four-wheel drive-equipped vehicles only send power to the four wheels when activated through the transfer case. AWD mostly comes with a locking differential and is not optimized for high speeds as the lateral wheels are locked with each other and are not allowed to rotate freely with respect to one another. However, it makes them perform exceptionally well in extreme off-road conditions.

How Much does it cost to convert a Chevy van to a 4x4?

It costs around $13,000 – $16,000 to convert a stock Chevy van to a 4x4 van capable of performing decently on off-road tracks. However, some companies, such as Quigley Motor Company, offer complete conversion of stock 2014 – present Chevy vans for under $60K.

Quigley is known to carry 4x4 conversions of full-sized vans, do a good job, and provide warranties on their setups. Check out the Youtube video below of a Chevy Express van 4x4 conversion using a torsion bar:

Does Chevy Express come in Awd?

Currently, the Chevy Express no longer comes in all-wheel-drive as it used to. Chevy Express was offered with AWD only on the 1500 model, with a regular wheelbase from 2003 – 2014. After Express 1500, Chevy has not provided AWD in either the 2500 or 3500 model. So, if you want an AWD Express, the used car marketplace is your best bet.

The new Chevy Express is a reasonably cost-effective vehicle to own. But unfortunately, its lack of AWD means that you're missing out on an important safety feature. That being said, it does have some subtle luxury features, such as power windows and locks and remote keyless entry that help make up for it.

The base price is somewhere under $30,000 for the two-wheel-drive model, which does have a V6 engine. The gas mileage is estimated at 17/22, and it gets an average of 16 miles per gallon in combined driving.

Did Chevy ever make a 4x4 van?

No, Chevrolet Express has never left the factory with a 4x4 system on it by default. However, some thirds party companies like Quigley Motors offer complete 4x4 conversion for a brand new Chevy Express.

The Express has excellent cabin space, a capable powertrain, and is reliable enough to take on longer journeys. It makes it a great choice for consumers looking for a nomadic lifestyle so they can convert them into 4x4s for improving their capability and even live in!

How Are The Express Van Rated?

The Chevrolet Express 1500, 2500, and 3500 are rated according to their payload capacity. It stands for GVWR, which is the Gross Vehicle Weight Rating. GVWR includes the curb weight of the vehicle and adds the maximum allowed payload to it. It is the maximum weight a vehicle can have on the road when fully loaded.

The Express 3500 is built to have the highest payload capacity of 3,920 lbs. It decreases to 1,801 lbs. for the 1500. The 1500 model was discontinued in 2014 due to the change in US vehicle definition policy. The policy made vehicles with less than or equal to GVWR of 8,500 lbs. fall under light-duty vehicles (or passenger cars). In turn, this made the Express 1500 fall under the light-duty vehicle segment. Also, due to the low sales of the 1500 model, Chevrolet decided to discontinue the 1500 model entirely for the future.

Chevy vans are one of the most reliable vans. It is run day and night in the commercial sector, loaded with goods around the van's payload capacity. It gets the commercial jobs done without breaking down, making it a considerable choice for corporate industries that involve logistics.

So, if you are looking out for a capable full-size van that is also exceptionally reliable, then the Chevy Express would not disappoint you. Even the RWD models do perform well on asphalt, snow, and some light off-road patches. But if you live in a state that gets filled with snow in the winters, then finding an all-wheel-drive model from the used marketplace is also sensible.

The Express van is an excellent option for anyone looking to buy an AWD vehicle. However, you will need to be aware that it may have over 50,000 miles on it. Nonetheless, it offers many features that make it ideal for those with active lifestyles and families with small children. The cost of this car may be off-putting to some buyers because it's more expensive than other options on the market, but in terms of safety and durability, you can't go wrong with this purchase!

Can You Flat Tow A Chevy Expres Van?

How Much Does A Chevy Express Van Tow?

Have a Chevy Express van with a 4WD conversion? Leave us a comment below!