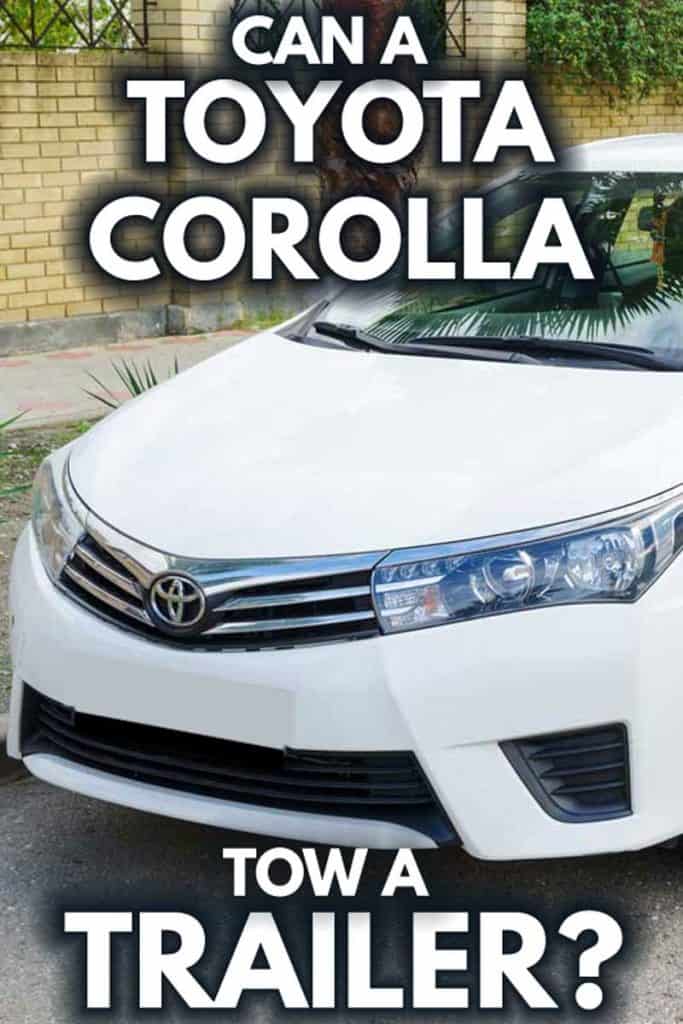 Sometimes you just need to tow something, even if you only own a small car such as the Toyota Corolla. You likely already know that you won't be towing any large camping trailers, but what about a ski-doo, utility trailer, or even a teardrop camping trailer? Well, it turns out any of those could just be in your cards, depending on the exact year and configuration of Corolla we are looking at. To help you find out what your Corolla can pull, we have searched through the owner's manuals for every Corolla model dating back to model year 2000. And the answer just might surprise you - in either a good or bad way.

If you own a newer Corolla, you are simply out of luck: Toyota states that no model built between 2014 and 2020 is approved for use with a trailer. However, many (but not all) models built between 2000 and 2013 are in fact approved for towing. And those that can tow, can pull up to an impressive 1500 lbs!

It is important to note that some older models are still not approved for towing, so check your owner's manual to find out if your specific Corolla year and specification is. There are also many important factors related to towing to consider, so stay with us as we cover them all.

Towing with a Toyota Corolla

According to the owner's manual, the manufacturer recommends not towing anything with any Corolla made between 2014 and 2020 model years. That's right - no towing at all. Going against this recommendation could end up causing damage to your vehicle, trailer, and/or other vehicles on the road, so don't do it.

Interestingly, this "no towing" rule has not always been in effect for the Corolla. In fact, many models prior to 2014 were approved for towing. Between 2000 and 2013, the Corolla was rated to tow up to 1500 pounds. Note that some cars equipped with certain engines, such as the 1.8-liter 4-cylinder units, are not rated to tow anything even on these older model years, so always check the details for your specific car before hooking up a trailer.

Still, 1,500 lbs is some serious weight for such a small car! In fact, many larger Toyota models, such as the Camry and Avalon, were not rated to tow as much as the Corolla during these years. Evidently, Toyota made their small sedans much stronger than they appear.

Can You Put a Trailer Hitch On a Toyota Corolla?

Once again, Toyota does not recommend installing a hitch on 2014 - 2020 Corolla models. If your Corolla was built between 2000 and 2013, however, your car is approved for use with a hitch. There are some caveats to be aware of, however:

According to the owner's manual, you must first verify that the hitch you are installing is approved for use with this model of vehicle. Then, make sure that the hitch is rated to tow at least as much as the heaviest trailer load you plan on using. Toyota also recommends removing your hitch when you are not towing with it.

Can You Put a Bike Rack on a Toyota Corolla?

Luckily for cyclists, any Corolla can be used with a bike rack. However, because some models are not approved for use with a hitch, you might have to use either a truck-mounted or roof-mounted system.

As always, Amazon has you covered when it comes to racks. Click here to see a cheap yet well-reviewed trunk-mounted rack that works with most recent model years. These trunk-mounted racks can be quite handy, as they don't scrape on bumps and dips quite as easily as hitch-mounted racks.

How Much Weight Can a Toyota Corolla Hold?

We are talking about the payload, or, as Toyota refers to it, the "vehicle capacity weight." This simply means the maximum amount of weight that can be loaded into or onto the car, and it does include everything. You must count your weight and the weight of all passengers, cargo in and on the car, and the trailer tongue weight when determining your payload.

Alright, so knowing the 2020 model's payload might be handy for some purposes, but it's not at all helpful when it comes to towing. So, let's go back a few model years, to the last Corolla that was approved for towing: the 2013. According to the owner's manual (p. 470), you can load your 2013 Corolla up with a maximum of 825 lbs. This is an important figure to keep in mind if you are planning to tow with your vehicle.

In case you were wondering, 2009 to 2012 models carry the same -lb weight limit. Previous years' weight limits can easily be found in the owner's manuals. If you don't have yours, no worries - Toyota has all of them available for you on their website.

Okay, so now that we know Corollas built between 2000 and 2013 are approved for towing up to 1,500 pounds, I must issue some notes of caution. As with any tow vehicle setup, there is more to worry about than just the overall weight of the trailer. Read over the following sections carefully to ensure you are not exceeding any of these important weight limits.

For starters, Toyota states that any trailer over 1,000 lbs must be equipped with trailer brakes. Brakes help keep the trailer under control when stopping and keep your stopping distances shorter than if you had no trailer brakes.

If your Corolla does not already have a trailer brake controller, these handy devices can be purchased on Amazon - here is one inexpensive option that fits the Corolla.

Brake controllers are not too difficult to install, but they do require some electrical know-how and power tools. If you don't feel comfortable installing it yourself, most mechanics or trailer distributors can get the job done for you in about an hour. Once installed, the trailer brake controller applies the brakes on your trailer whenever you apply your Corolla's brakes.

Additionally, you must ensure that your overall car plus trailer weight stays within the GCWR (gross combined weight rating) limit set in your owner's manual (or doorjamb sticker). For example, this limit is set at 4,797 lbs for a 2013 Corolla with the automatic transmission. That means you must ensure that your car, everything in it, and the trailer combined weigh less than that amount.

Finding this total weight can get a bit tricky. You can always add up the weight of everything in the car, add it to your models curb weight (found on the doorjamb or owner's manual), and then add the trailer weight. Or, to get even more precise, head on down to your local truck scales (usually found on the side of the highway) to get an official weight rating for your rig.

Finally, you must be cognizant of your tongue weight. This refers to the amount of weight your trailer puts on your hitch. Toyota, like most other manufacturers, recommends keeping the tongue weight at between 9% to 11% of the overall trailer weight. For example, a 1,000-lb trailer should have a tongue weight of between 90 and 11o lbs. Going over or under this weight rating could lead to all sorts of problems, including damage to your suspension or dangerous trailer sway as you drive with the trailer.

To Tow or Not to Tow

Now that we have covered all the basics of towing with the Toyota Corolla, you should be able to determine if your particular vehicle is up to the task. If your car is rated to tow, you should have no issues as long as you follow all of the guidelines in this article and drive slowly and safely. Being able to pull a small trailer can open up a world of opportunities for you, and I bet most Corolla owners don't even consider it an option, so good on you for doing your homework!

More about the Toyota Corolla

Whether you already own one or are considering getting a Corolla, we think you'll find these interesting -

Is the Toyota Corolla a Good Car?

What Are the Different Models of the Toyota Corolla?

My Toyota Corolla Key Is Stuck in the Ignition – What to Do?