Hondas are affordable and reliable cars, especially the old ones. With loads of available parts for these cars, you might wonder if you can mix and match them. With the help of experts, we will determine if you can put a VTEC head on a non-VTEC engine.

Yes, you can put a VTEC head on a non-VTEC engine, but this is only possible if they are in the same series. You can find these modifications on older sets of Hondas, since their parts are plentiful and have a lot of after-market support.

Most of Honda's older engines have interchangeable parts as long as they are in the same series. That's why they are popular with car enthusiasts. For more information about Honda, keep reading below. 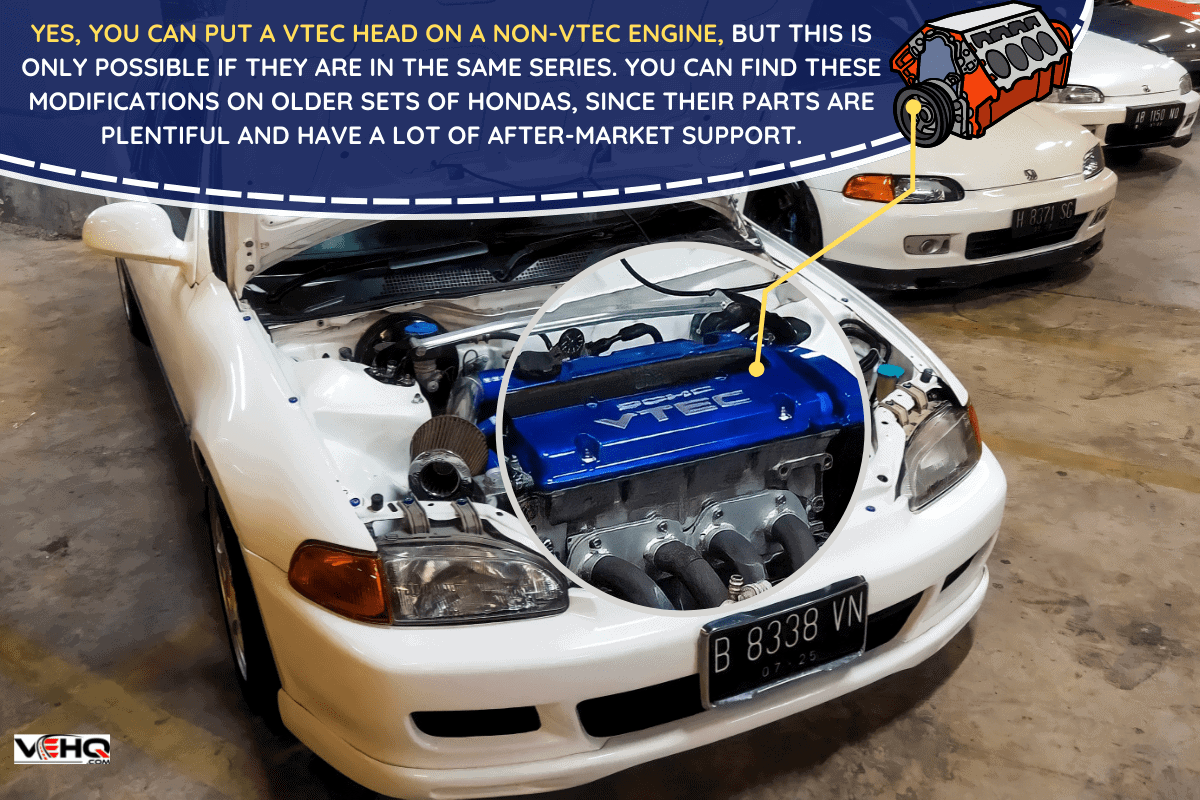 Putting A VTEC Head On A Non-VTEC Engine

Car modification is not new and has been around since people have understood how vehicles operate. One component of the car that people will usually work on is the engine.

There are many reasons a person would want to modify their engine, whether it be to add more power, complete a particular setup, or get their car running. And this is the case with many Honda owners, especially the ones who own older models.

Honda has made most of its older engines interchangeable, such as the head for the D15, D16, and ZC engine series, mostly seen on Civics. With some engines, such as the B series, you can put a VTEC head on a non-VTEC engine.

Installing a VTEC head will allow you to establish the VTEC feature on your engine, but this will require a bit more modification.

The VTEC feature on Honda engines is great for producing more power in the top end. That's why most VTEC engines can reach higher RPMs than other manufacturers.

Doing this modification is excellent for people who like a challenge or want a different build than other Hondas. You should note that having a professional help you with this project is the best way to ensure that you install the right parts and modify the car's engine correctly. 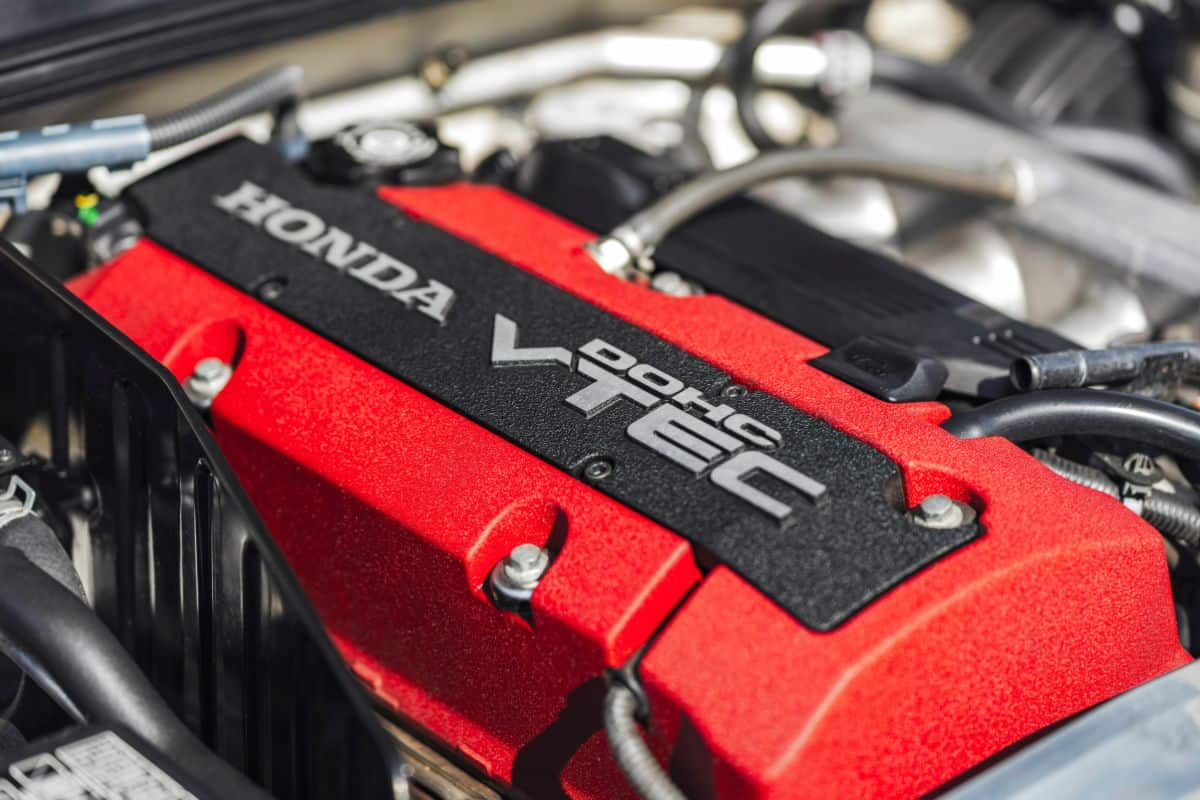 If you have ever driven, ridden, or seen a Honda, you may know that it can suddenly release a louder, higher pitch exhaust note after reaching a certain RPM. This is what they call VTEC or Variable Valve Timing and Lift Electronic Control.

VTEC has been a staple on Honda engines and is one of the the first things people associate with Honda.

VTEC is a feature that helps keep fuel consumption low and gives you an extra power boost on the top and even the low end. VTEC did not originate from a car engine but a motorcycle, specifically the Honda CBR400.

Honda first introduced VTEC on a car in the 1980s, and it is notably seen on a DOHC engine of the Integra. It wasn't until 1991 when VTEC reached the U.S. in the engine of an NSX. This technology helped Honda to produce more power even if it had a small displacement.

VTEC works when the car's computer detects that everything is in the proper condition, such as engine oil pressure, temperature, RPMs, and throttle position. That's when it activates.

A VTEC is a low or high-stage cam system that mechanically switches cams at a specific RPM level.

Do Other Car Manufacturers Have VTEC? 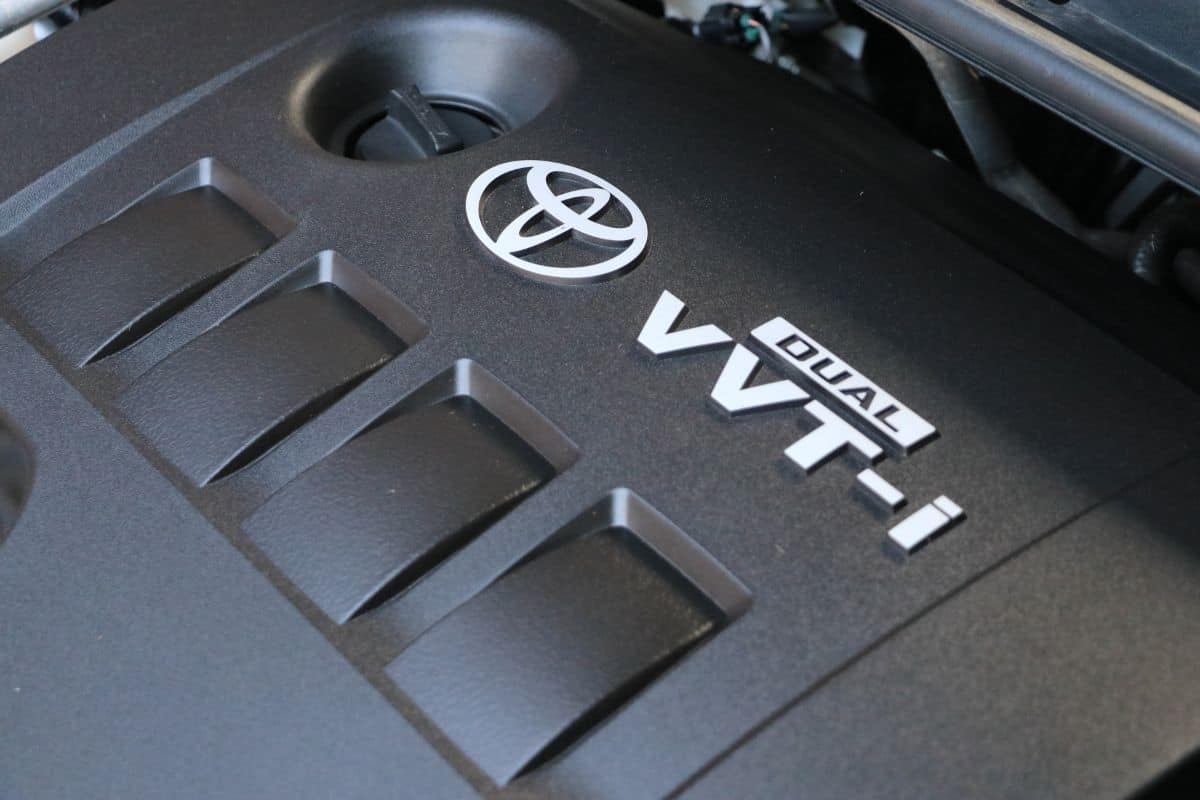 Yes, other car companies have a feature like Honda's VTEC, but it's not the same.

In the 1990s, Honda's rivals were using turbos to help gain more power for their vehicles. At the same time, Honda stayed true to its mission of having a fuel-efficient yet powerful engine—hence the predominant usage of VTEC.

But even if they are known to have VTEC, other companies have the same thing but in a different name. Companies that have a feature similar to Honda's VTEC are Toyota with VVT, Mitsubishi with MIVEC, Porsche with VarioCam, BMW with Vanos, and many more.

To an untrained driver, Honda's VTEC and other companies' similar features may make no difference—especially if you use your vehicle for daily driving. But once you know more about VTEC, you can distinguish it from the rest.

What Are SOHC And DOHC Engines? 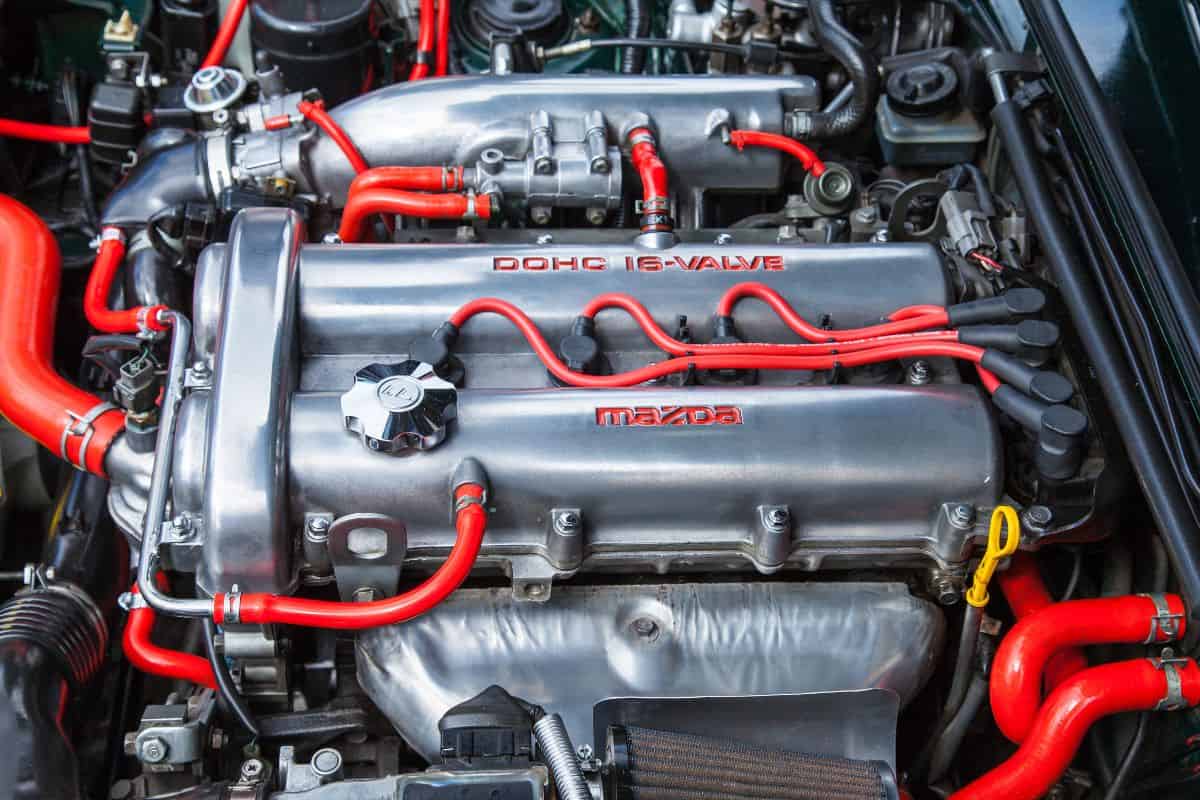 An SOHC, or single overhead camshaft, only uses one shaft, which operates the exhaust and intake valves. The SOHC engine can have two, three, or four valves per cylinder, depending on the make of the engine head.

Inside an SOHC engine head, you can find exhaust valves, intake valves, rocker arms, rocker arm shafts, return springs, and a single camshaft. The SOHC engine is excellent for economy vehicles, since manufacturers can create this engine at a lower cost than the DOHC.

The power output of the SOHC tends to produce higher amounts of torque towards the low- to mid-RPM and provides excellent fuel economy. A great example of an SOHC engine is the D series of Honda.

A DOHC or dual overhead camshaft uses two independent shafts, which operate the exhaust and intake valves. A DOHC engine has four valves per cylinder, giving it a better valve lift, resulting in better airflow through the engine's combustion chamber.

With much more airflow than an SOHC, a DOHC can produce more horsepower, even with a small displacement. You can notice the power output of the DOHC engine on the top end, but the drawback is that it costs more to produce and may weigh a bit more than an SOHC.

Some notable DOHC engines are Toyota's 1UZ-FE, Honda's K20C1, and Ford's Cayote, to name a few.

Choosing Between SOHC And DOHC 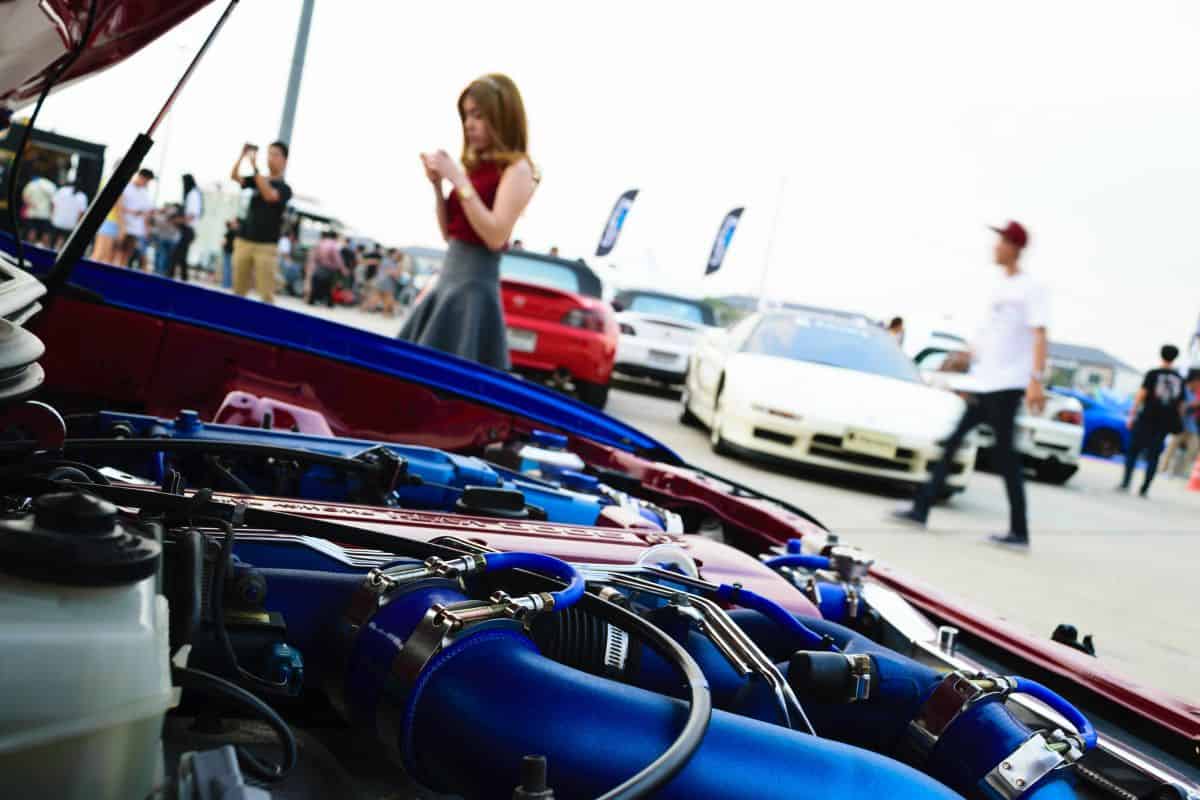 Choosing between an SOHC or DOHC depends on how you plan to use your vehicle. SOHC and DOHC engines are different from one another, and they both have their own advantages.

If you are looking for a cheap, fuel-efficient engine, your best bet will be an SOHC, since it is cheaper to produce and repair. You can find these engines on economy cars because of their exceptional fuel economy. They can pack a punch, but they are no match for a DOHC.

If you are looking for power, then a DOHC engine is your best choice. It can also be fuel efficient, but this will depend on the engine's design.

A DOHC engine is an overall great performing engine, and most of the time it provides an excellent balance between performance and good fuel economy.

A DOHC engine provides its users with power on the top end, giving it extra speed compared to the SOHC, which is a bit torqued-focused. That's why, when someone wants more power, they typically go for a DOHC engine. 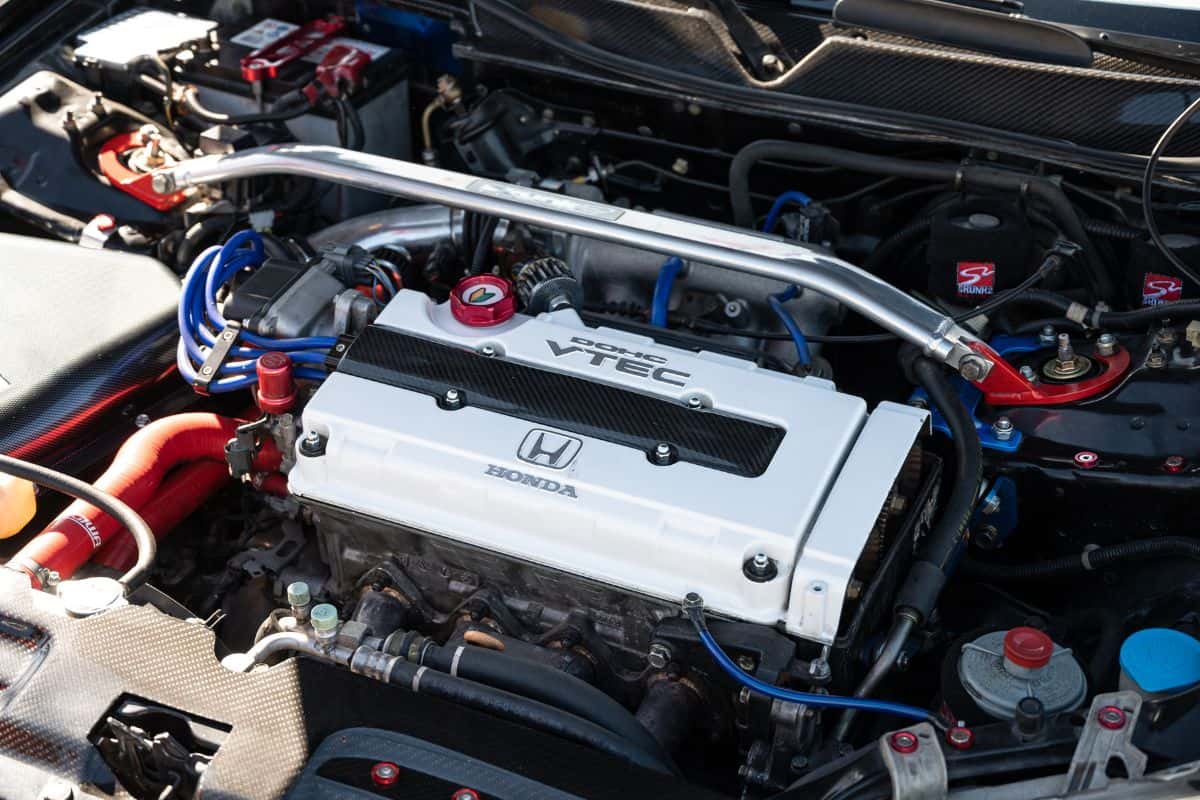 You can put a VTEC head on a non-VTEC engine and have the option to connect the VTEC feature or not. You can only install a new head on an engine if the head and block belong in the same series.

VTEC is a great feature found in most Honda vehicles, and it helps with adding power and fuel economy. Other manufacturers also have something similar to VTEC, but the feature is called something else.

Once you have a deep understanding of VTEC, you'll quickly identify it from the others. Remember that choosing whether to go for an SOHC or DOHC engine should depend on the purpose of the vehicle.

Is the Honda Odyssey AWD? [Other Systems Help Keep It Stable]

What Is The Best Diesel Exhaust Fluid For EcoDiesel? [And When To Add It]