With very few Rivian charging stations, do Rivian drivers have the option of using a Tesla charger? Is the Tesla charger compatible with a Rivian car? We researched to answer these questions and provide you with all the relevant information.

Yes, you can charge your Rivian with a Tesla charger using the Tesla to J1772 adapter. Note that the J1772 adapter is incompatible with the Tesla Supercharger.

Keep reading to find out how you can charge your Rivian car using a Tesla charger. Included are different options for charging using the Tesla charger. In addition, you can find out the cost of installing this charger and charging your electric car.

How To Charge Your Rivian Using A Tesla Charger 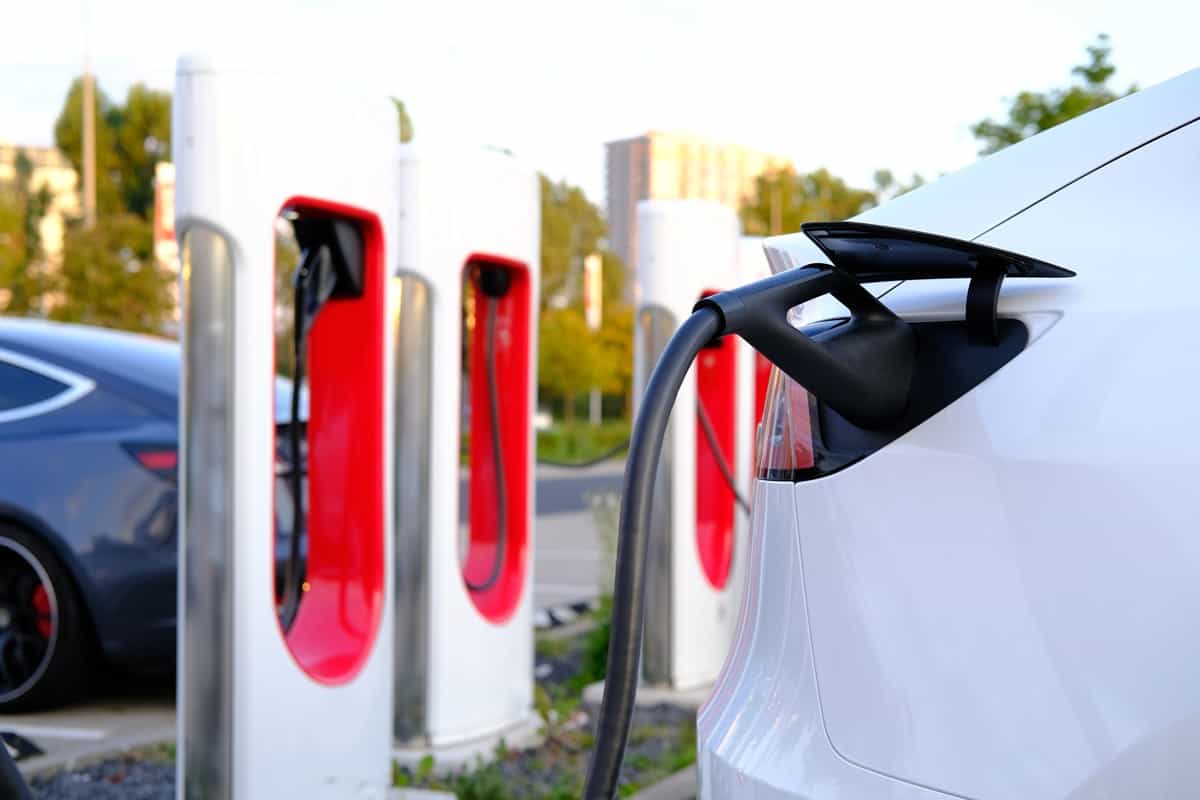 You can charge your Rivian with a Tesla charger at home or at a charging station. But keep in mind that the Tesla charger can't fit into the charging port of a Rivian, so you will need to use a Tesla to J1772 adapter.

Have a look at this Lectron Tesla to J1772 adapter on Amazon.

To charge your Rivian with a Tesla charger, follow the steps below:

The video below provides details on the charging process.

The J1772 adapter is incompatible with the Tesla Supercharger, which charges at very high speeds in less than an hour. It’s only compatible with Tesla vehicles. However, plans are underway to open the supercharger network to non-Tesla cars soon.

The options available for charging non-Tesla cars using a Tesla charger that is not a supercharger include the following:

Check out this Tesla wall connector on Amazon.

Installing a wall connector in your home is a convenient way of charging your car overnight. You can also install it at your workplace parking slot, which is a great idea because you can charge your car while at the office. 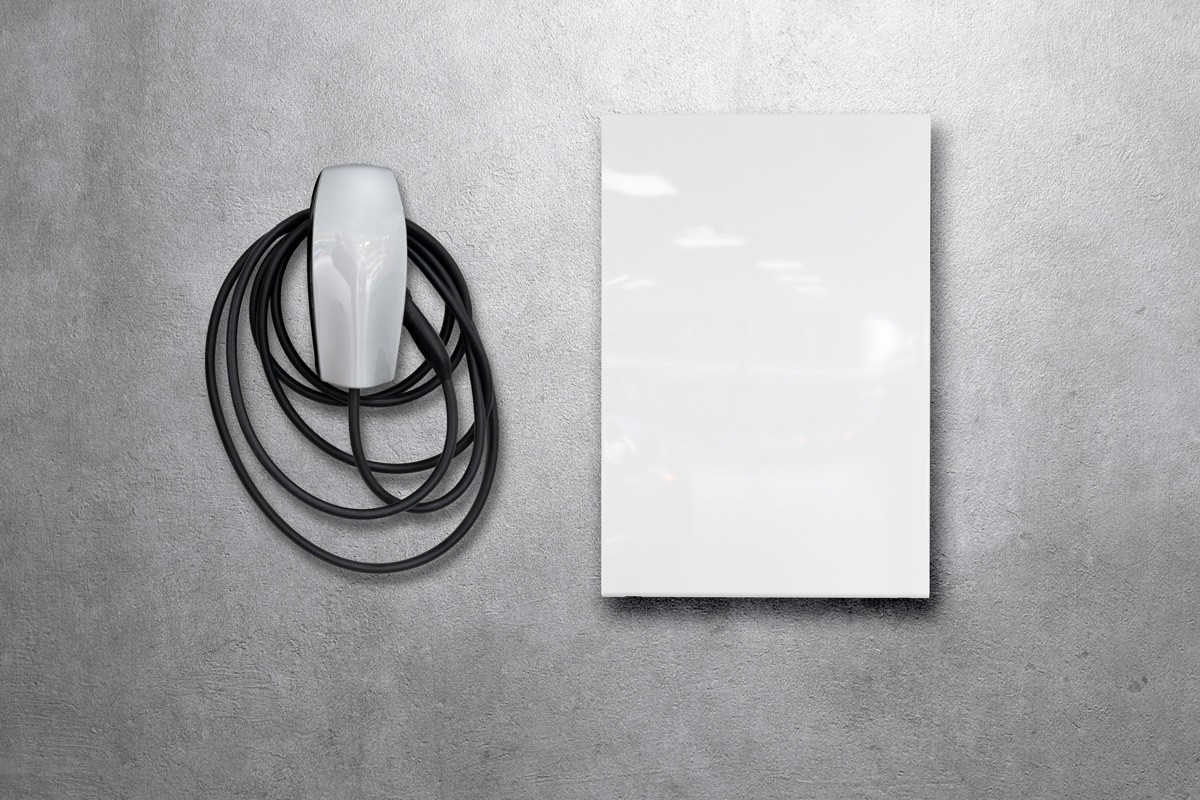 You can opt for a mobile connector if you don't want to use a wall connector. Plugging it into a 120V outlet allows you to charge your vehicle between two to three miles of range per hour.

This is a suitable option if you don't drive more than 30 to 40 miles daily.

Some apartments or office buildings have charging stations. These can be shared by the tenants to charge their cars.

Check out this Tesla Level 2 charging station on Amazon.

The Tesla company has partners all over the United States that own land or businesses. The partnership entails allowing the installation of Tesla chargers on their sites for public use.

You can find the chargers at hotels, restaurants, resorts, and other commercial establishments. So if you stay at a hotel, you can charge your Rivian overnight. You can also charge your car while you dine at a restaurant for a few hours.

If you are traveling, don't worry about where you will charge your car next. You can download the Tesla app and find your next charging destination.

How To Use The Tesla Charger

To avoid any mishaps, it is important to use the Tesla Charger correctly.

Benefits Of The Tesla To J1772 Adapter

There are very few charging stations for Rivian vehicles, while there are hundreds of Tesla chargers all over the United States. Therefore, it makes sense to charge your car with a Tesla charger.

What Are The 3 Levels Of Tesla Chargers? 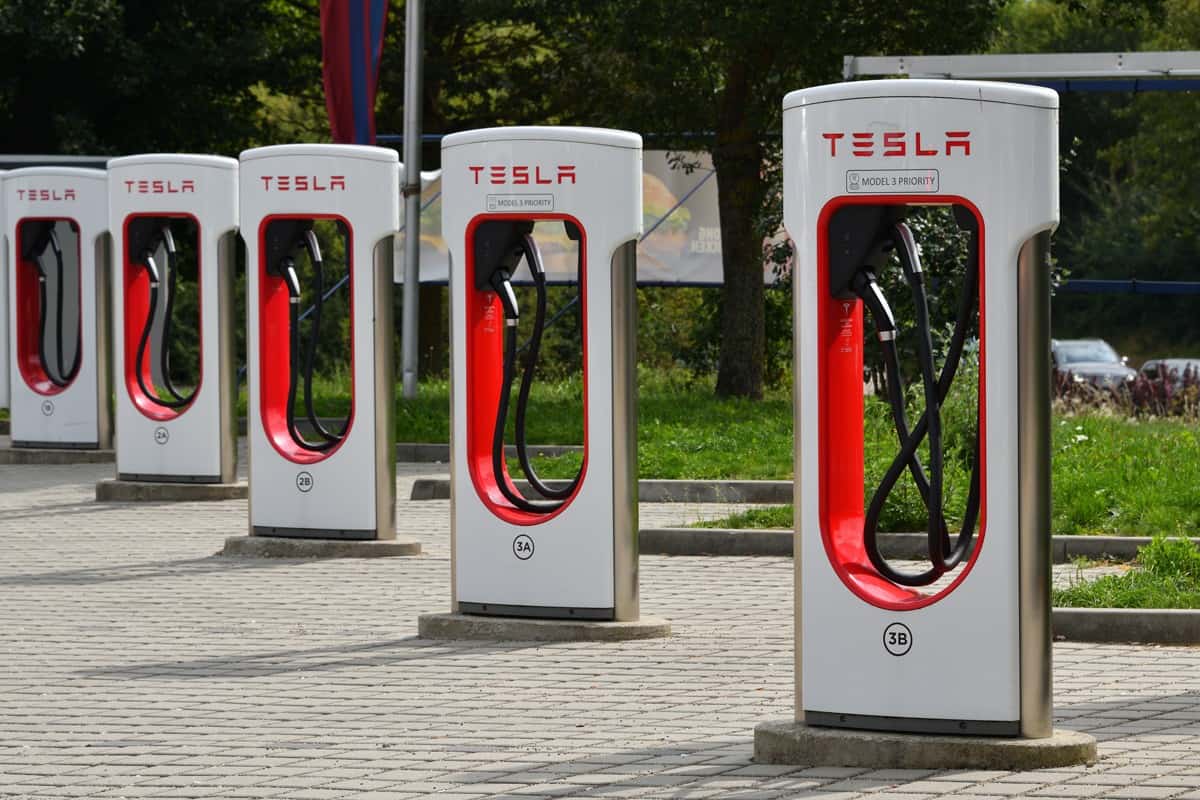 A Tesla charger has three levels. We cover them below.

Known as a "trickle charger," due to its speed, it is the slowest among all the levels using a 120 volts electrical outlet.

It charges at two miles of range per hour, at 15-20 amperes, delivering at 1.4 kW of power. You can charge your Rivian by connecting the Tesla to J1772 adapter to the Tesla Level 1 charger.

More than 10 times faster than Level 1, this charger uses a 240V electrical outlet, delivering between 3.3 to 17.2 kW of power. It charges at a speed between 10-52 miles of range per hour charging, with up to 80 amperes.

As with Level 1, you can charge your Rivian by connecting the Tesla to the J1772 adapter to Level 2.

The Tesla Supercharger belongs to Level 3 and has the highest charging speed.

As we mentioned, you can't charge a Rivian with a Tesla supercharger, although there are plans to open up the Supercharger to non-Tesla vehicles.

It uses a high-power electrical outlet with 480 volts and charges up to 170 miles of range per hour. With up to 300 amperes, it delivers 140 kW of power.

Be prepared to pay between $750 and $1,500 to install a Tesla wall connector in your home. The wall connector will cost you around $400. The total cost includes labor, inspection, permit, and job complexity.

If you have the skills, you can install the wall connector yourself. You'll be able to significantly reduce the labor cost.

Lack of power output is the most common reason you may need to repair the wall connector. You may call an electrician to check the gadget, or you can repair it yourself to save on costs.

If you prefer using the Tesla mobile connector, you can purchase one for around $200. No installation is needed for this method of charging your car.

Cost Of Charging Your Electric Car 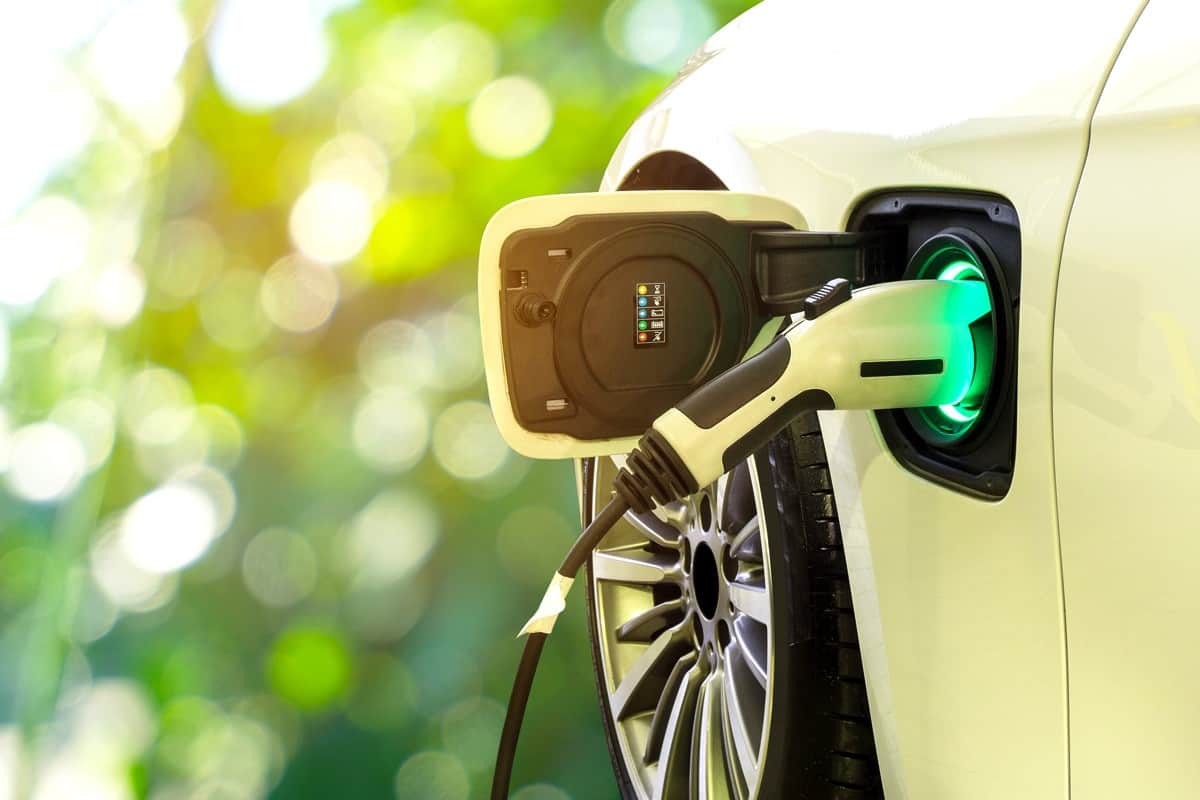 Compared to fueling a car, which costs around 16.66 cents per mile, charging your electric car is much cheaper. 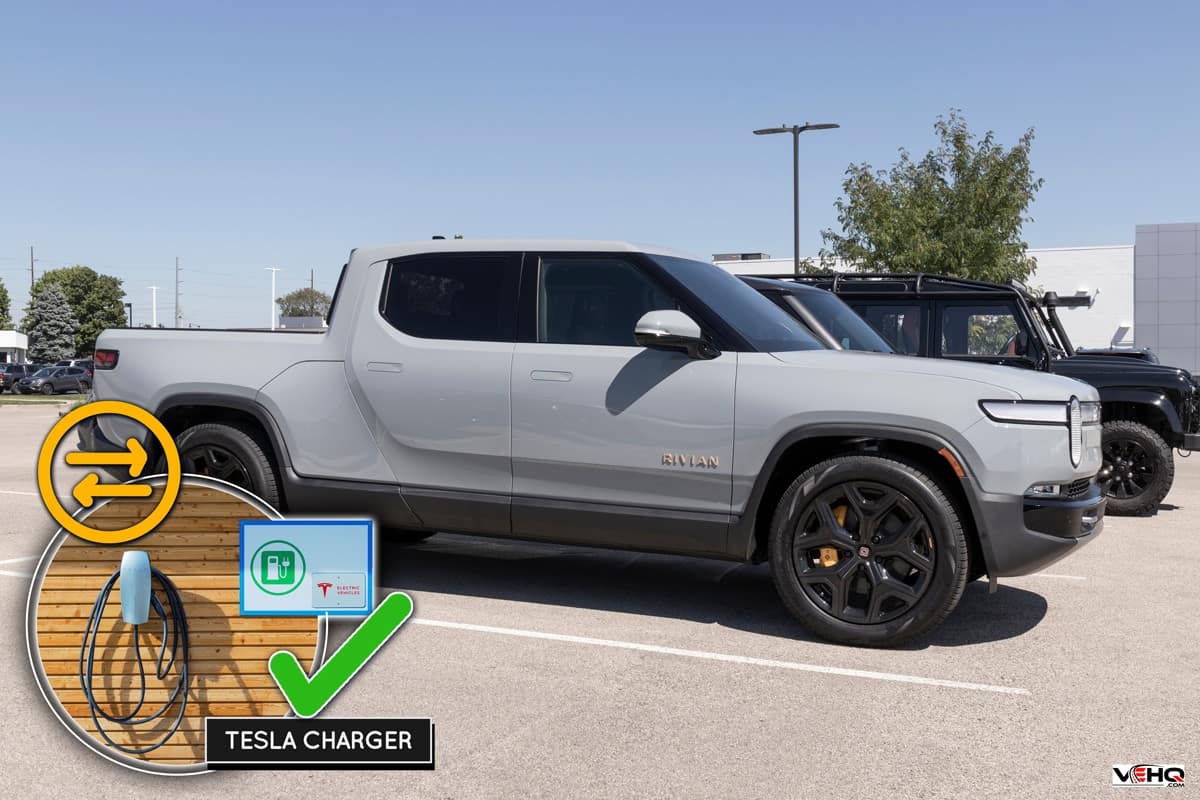 Because there aren’t enough stations for charging Rivian cars, using a Tesla charger is a good idea. You can either charge your car from a wall connector in your home or at a charging station.

Alternatively, you can use the mobile connector. For this to be possible, you must use the Tesla to J1772 adapter.

In this post, we included steps for installing your Rivian to Tesla charger. In addition, we explained how to use the adapter J1772 correctly, the benefits of using the adapter, and described the three levels of Tesla chargers.

If you found this post helpful, check out these related articles:

Can Hyundai Ioniq Use Tesla Chargers

How Long It Takes To Charge Tesla At Public Charging Station