You've been thinking about modifications or a rebuild on your Cummins 5.9 engine, particularly boring out the cylinder heads, but you are wondering how much? We've done some research and compiled information to help you make your decision.

There are many reasons you might want to bore the cylinders in a Cummins 5.9 diesel engine block. Two of the most common reasons include engine restoration or modification of engine displacement for increased horsepower and torque. The standard bore on a Cummins 5.9 is 4 and is said to withstand a maximum bore increase of up to .60 over, but that much is not recommended. A bore of .10 - .30 over is much more common and will get the job done.

Since the Cummins 5.9 is no longer in production but still a fan favorite, rebuilding the beloved engine is not uncommon. The rebuild process often requires that the cylinder heads be bored out to remove damage and debris. However, this is not a standard DIY job. Read on to learn about the process. 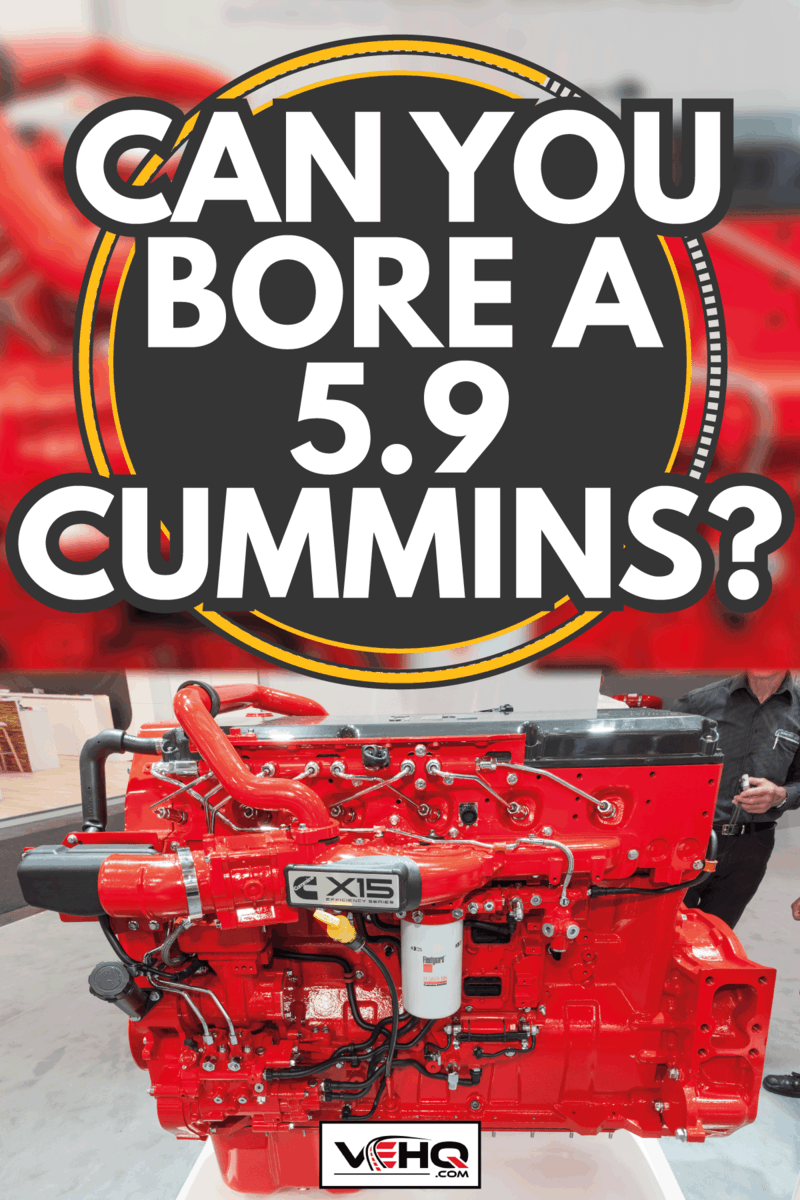 To better understand the Cummins 5.9 engine, let's take a brief look at its history. The Cummins 5.9 diesel engine first came about in the 80s in agriculture equipment. The success of the engine's ability to hold up to the demands of the farming and heavy equipment industry opened the door for Cummins to partner with Chrysler for the production of the 5.9 in Dodge trucks in 1989-2007.

The double torque and increased fuel economy got people's attention even though the truck itself was simple. From there, the engine underwent many changes until it was finally replaced by the Cummins 6.7 in 2007.

When rebuilding your Cummins 5.9 engine, you will probably find damage to the cylinder heads. This is caused by the ongoing friction from the pistons that scratch or pit the cylinder walls. There can also be a build-up of debris within the engine block if the engine was not properly maintained.

Unless you're mechanically skilled and trained, cylinder head boring should be done by a reputable machine shop. Be sure to find one with the right equipment and lots of experience. Precision tools and an appropriate engine block mount are a must to get the job done right.

Boring the cylinder heads returns the cylinder wall surface to a smooth finish allowing the rings to properly seat and seal. This is important within the combustion chamber for two reasons. First, it holds compression in. Second, it keeps oil out.

It is important to note that boring is not always needed. If the scratches or rust are light, you may be able to hone rather a full rebore.

Once you have your cylinders bored, make sure that the cylinder heads are cleaned of any debris and well lubricated before adding the new pistons. Otherwise, any metal shavings left behind will re-scratch the cylinder walls undoing the job you just paid to have done. Also, remember after cylinder heads have been rebored, there is a break-in period in which you should not over-exert your engine.

A common, favorite lubricant mentioned by many mechanics is WD-40.

Find it on Amazon.

Advantages to Boring the Cylinder Heads

There are advantages to boring your cylinder heads. One is the cost-saving of having an engine block rebored rather than purchasing a new one, especially since the Cummins 5.9 is no longer in production.

It is also worth mentioning that a structurally sound engine block is already seasoned, meaning it has gone through the heating/cooling process countless times. This means you face fewer stress risers because the metal has become more aligned over time. One enthusiast even refers to it as "happier" metal.

Disadvantages to Boring the Cylinder Heads

There are cons to boring cylinder heads. One is that you make the cylinder walls thinner. In some cases, this can lead to overheating and a crack in the engine block. A sonic check is important if you plan to overbore the block more than the standard amount or if it has been bored several times.

A second disadvantage is that you can only bore an engine block so many times before it will need replacement. However, this might not be an issue for the average use of an engine. Finally, there can be a loss of fuel economy because of increased engine displacement.

Engine displacement is the amount of fuel and air moved within the engine, creating power.  More engine displacement usually, but not always, means more horsepower and torque as long as other systems can compensate for the increase.

When the cylinder head bore is made bigger, more air and fuel can move through the engine block, and larger pistons can be added, creating increased power potential.

Displacement is a measurement that can be calculated using the following formula: displacement = π ( 1/2 × bore )2 × stroke ×  number of cylinders. This calculation can help you know how far you can overbore your heads if engine displacement is your goal.

Diesel engines may have less horsepower than their gasoline counterparts, but they have more torque. Torque access can be low-end or high-end. Low-end torque is good for fast acceleration. In contrast, high-end torque is good for carrying or pulling heavy loads, enduring steep inclines, and off-road conditions. This is a strong selling point for many diesel truck owners who use their trucks as workhorses.

High torque was an original factor in making the Cummins 5.9 popular. The early Cummins 5.9 engines showed off torque numbers of 420 on the manual and 460 on the standard versions. By the end, the torque numbers increased to 610 ft-lb.

Can You Bore and Sleeve a 5.9 Cummins?

The Cummins 5.9 is a parent bore engine, so in its original state, it does not have sleeves.  However, the block can be overbored and a sleeve pressed in by a machine shop for repair purposes. Cummins also sells repair sleeve kits that can be installed.

How Much Does it Cost to Bore a 5.9 Cummins?

This is a job that will probably require a quote from your local machine shop. Most people, including many garages, do not have the proper machinery and equipment to bore cylinder heads. Therefore you need a skilled professional at a machine shop.

The Cummins 5.9 is an inline 6-cylinder engine, so the average cost of having the cylinder heads bored would probably range between $200 and $250.

You also have the cost of new pistons, rings, and other engine compoenents.  If adding larger pistons, that will be an additional expense.

How Much Does it Cost to Sleeve a 5.9 Cummins?

You can purchase a brand new repair sleeve for a Cummins 5.9 from online retailers for between $106 and  $125 for the part only. There are also salvage repair sleeves available online. These can be found for as little as $16 without tax and shipping. However, some sleeves may require custom fabrication. You would need to contact your local machine shop for a quote on a custom job.

The second part of the job is going to be labor cost. If you are able to perform the work yourself, then this isn't an added expense. However, if you need a professional, labor rates for a skilled mechanics range can range between $47 and $215 per hour depending on several factors, according to AAA.

How Much Power Can You Gain from Boring a 5.9 Cummins?

You may need to pair engine displacement with other modifications, turbochargers, or superchargers.

If you aren't ready to part with your Cummins 5.9, you can give it a rebuild with both a bore and sleeve job, if necessary.

If you are wondering when your truck might need an engine replacement, this article might be of interest, "How Long Do Cummins Engines Last? [Including The 5.9 & 6.7]."

If you are looking to join the Cummins family, read "What Pickup Trucks Have Cummins Engines?"