Reusing head gaskets is becoming a popular alternative to buying new ones. You'll see a lot of articles and Youtube videos about it. Is this a good idea? We have researched opinions from experienced mechanics and will share our findings with you.

Reusing a head gasket, even if it has not blown up yet, is generally not a good idea. When a head gasket is reused, it is not as tight against the engine block as when it was first installed. A head gasket can only be compressed once to seal the cylinder head and engine block tightly.

If you're worried about saving money by reusing old head gaskets, you can reuse them for as long as they last, but there's a hefty price to pay. Read on as we go deeper into what happens when you reuse a head gasket. 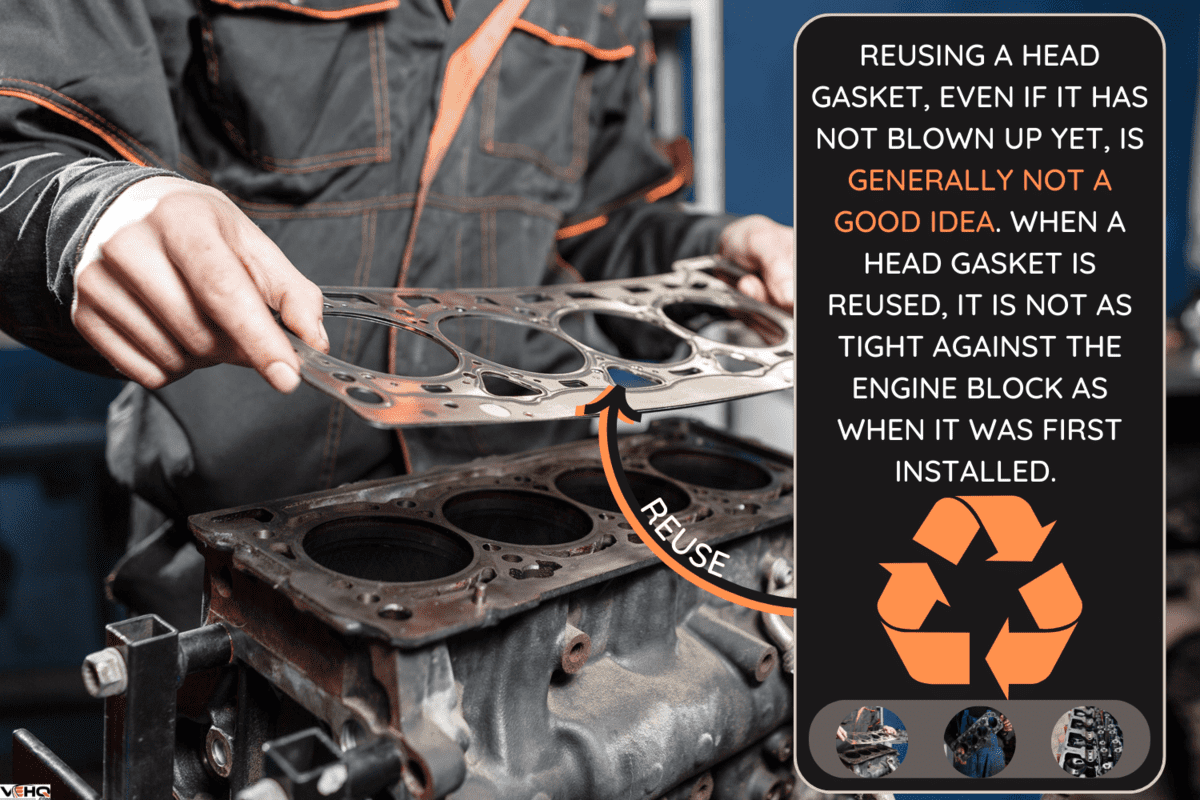 What Happens When You Reuse A Head Gasket?

A head gasket is one of the most important components of your engine. They seal the cylinder head and piston assembly and allow for the combustion of fuel and air.

Modern head gaskets are made of multi-layer of steel. They are designed to withstand the extreme heat generated from combustion. However, reusing a head gasket, whether it's a replacement or a remanufactured one, is always a gamble. It's possible that the gasket can last for months, but it can also fail after one or two weeks.

Remember that replacing a head gasket isn't as simple as flipping the hood open. You'll need to remove and take the engine apart to get to the head gasket. On average, it will take a minimum of six hours to complete the replacement.

We all have seen those videos online where people are using the same head gaskets multiple times. This is highly discouraged by expert mechanics, especially by Andre, a Quora contributor who has been an automotive technician for 45 years.

Imagine you going through hours of hard work to get the head gasket just right, only to have it blown apart in a few weeks! You're going to end up damaging your head gasket sooner than you expect as well as increasing the chances of your engine getting damaged.

Can You Replace The Head Gasket Yourself?

Head gaskets are not repairable once they have failed, so the best course of action is to replace the head gasket. Luckily, it's not difficult to find replacement head gaskets, and they can be replaced in about a few hours.

It's not recommended that you replace your head gaskets yourself. The procedure is very detailed, and you'd likely make a mistake. The last thing you want to do is destroy the most important part of your car because you didn't know the proper procedures.

Even an average mechanic would have difficulty getting it back on the engine block. This is because every bolt requires precise torque specifications, which are often hard to replicate unless you have the experience.

A slight error in the torque specifications can lead to the gasket being too loose, and this will cause the engine to leak. You may not be able to see the leak now, but the constant joggling and vibration could eventually cause bolts to loosen up more.

It's also possible that you'll damage the threads of the bolt itself if it's too tight. Besides, there's a sequence that needs to be followed for each bolt for it to be correctly installed. 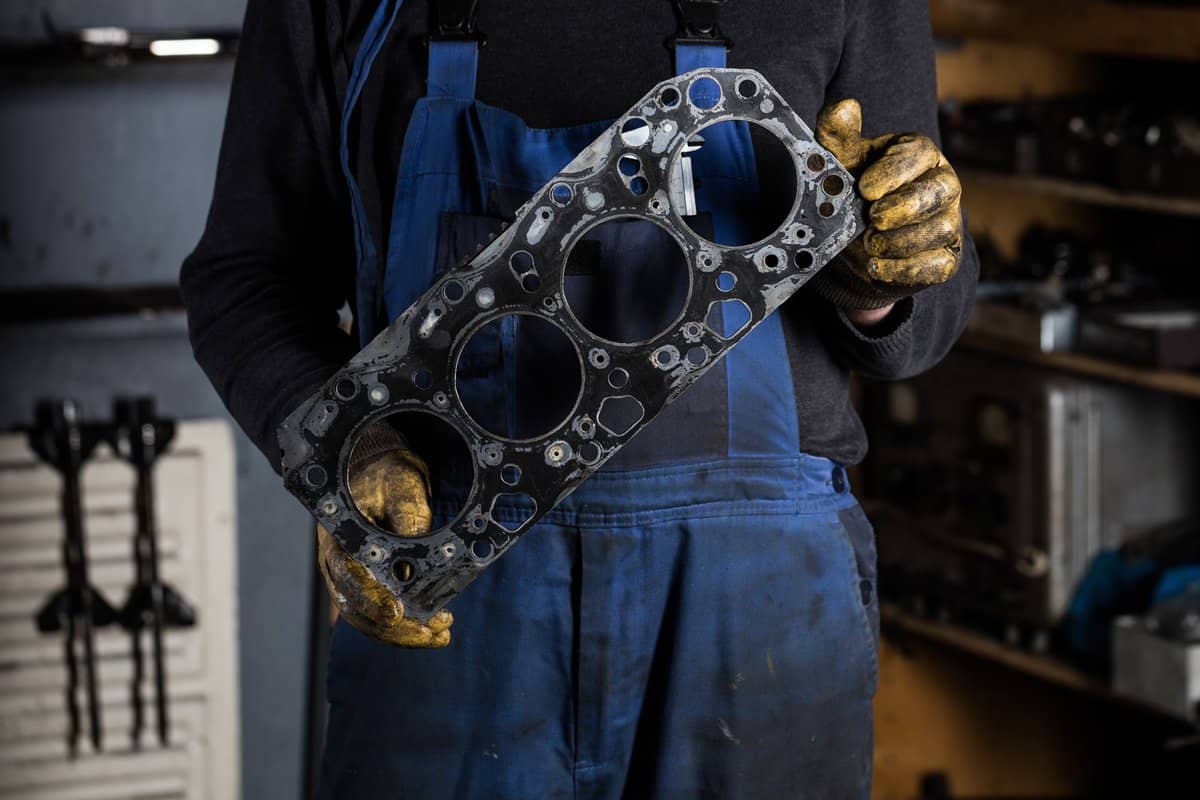 4 Signs Of A Blown Head Gasket

We know that an overheated engine is an indicator that something is wrong. When you've got a blown head gasket, your engine is running hotter than normal.

This is because a blown head gasket can cause your coolant to leak in the combustion chamber and be combusted along with fuel and oxygen. This results in a low coolant level, putting strain on the engine and causing it to overheat.

The white smoke that is coming out of your exhaust is the byproduct of the combustion where the coolant is burned.

When a head gasket fails, it can cause the piston rings to lose compression. This can happen if the head gasket has deteriorated so badly that it allows the oxygen and fuel to escape from the combustion chamber.

The result is less power, which leads to the engine working harder but less efficiently. Additionally, your car's engine will occasionally run rough on idle and knock.

The coolant is designed to absorb heat from the engine, while the oil keeps the moving parts lubricated.

When the engine is running, a certain amount of pressure is required to force the coolant and oil through the system. This pressure requires a seal to prevent them from mixing. 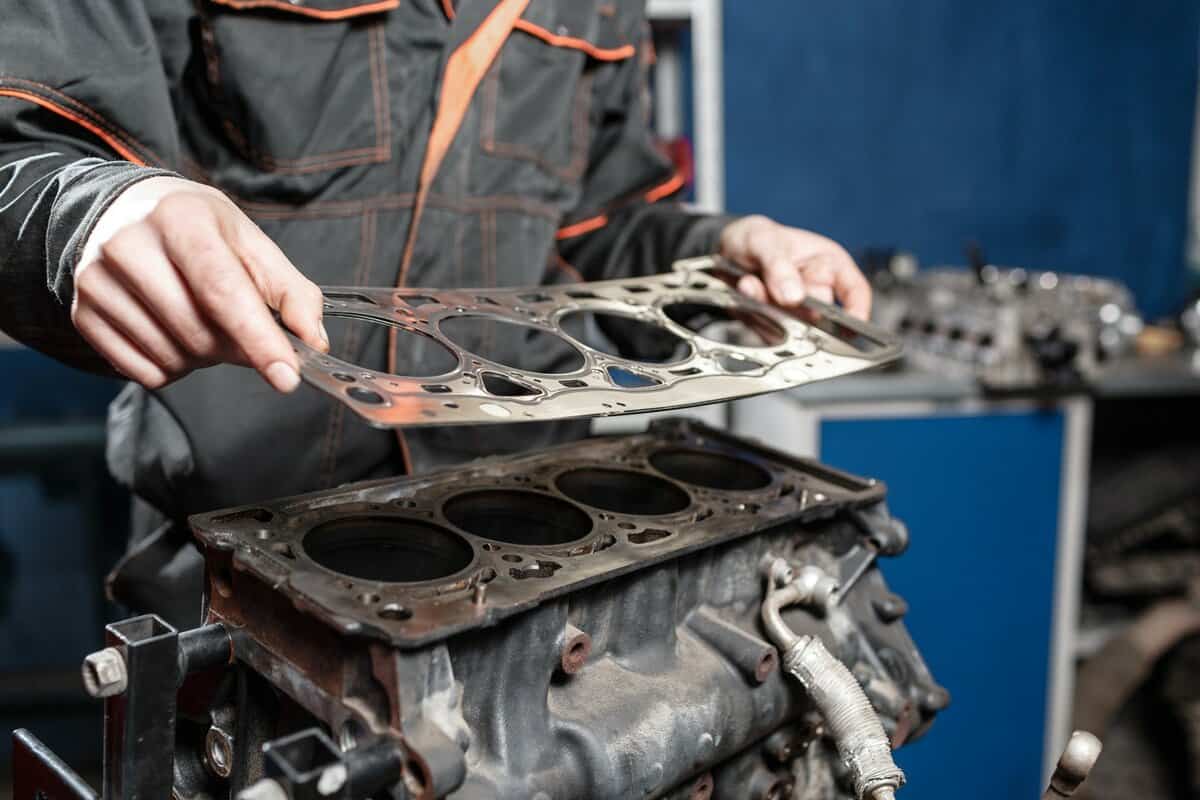 How To Diagnose A Failing Head Gasket?

You may not be able to replace a blown head gasket by yourself but diagnosing a failing one is pretty easy. Below are the steps:

2. Use a combustion leak tester to confirm. The kit includes a cylindrical tube and a test liquid which will turn yellow if you have gas in the radiator. Pretty much like a litmus paper used to check water's acidity.

3. Fit the tube into the radiator nicely and tight.

4. Pour the blue test liquid into the tube. There's a mark in the tube indicating how much of it you should use.

5. Put the rubber thing that looks like an inflation bulb of a sphygmomanometer on top of the tube and squeeze it to suck air inside the tube.

6. Start the engine and keep on squeezing the rubber bulb. If the blue liquid turns yellow, you have a blown head gasket.

Check out this combustion leak testing kit on Amazon.

The video below shows the entire process:

Replacing a vehicle's engine is a cheaper option than replacing a blown head gasket. Brand-new head gaskets are cheap. It's the labor cost that will be the killer.

You can consider yourself lucky if you can find a mechanic who will accept the job for $900, and that's for labor costs alone!

This is because they know that it's a messy job. You'll need to remove a lot of things, such as your cylinder heads and bolts. Even after that, you'll have to drain the coolant from your engine and put it back after the job is finished.

Besides, your engine will most likely have some issues internally. It seems logical to assume that when your head gasket is blown, you're more likely to have a warped piston or cylinder wall or some internal issues with the engine.

So, you can expect to pay additional costs for repair and parts replacement aside from the head gasket.

Regardless if it's a minor or major repair job, mechanics will always charge you more for the job due to the fact that it's an issue with the engine. 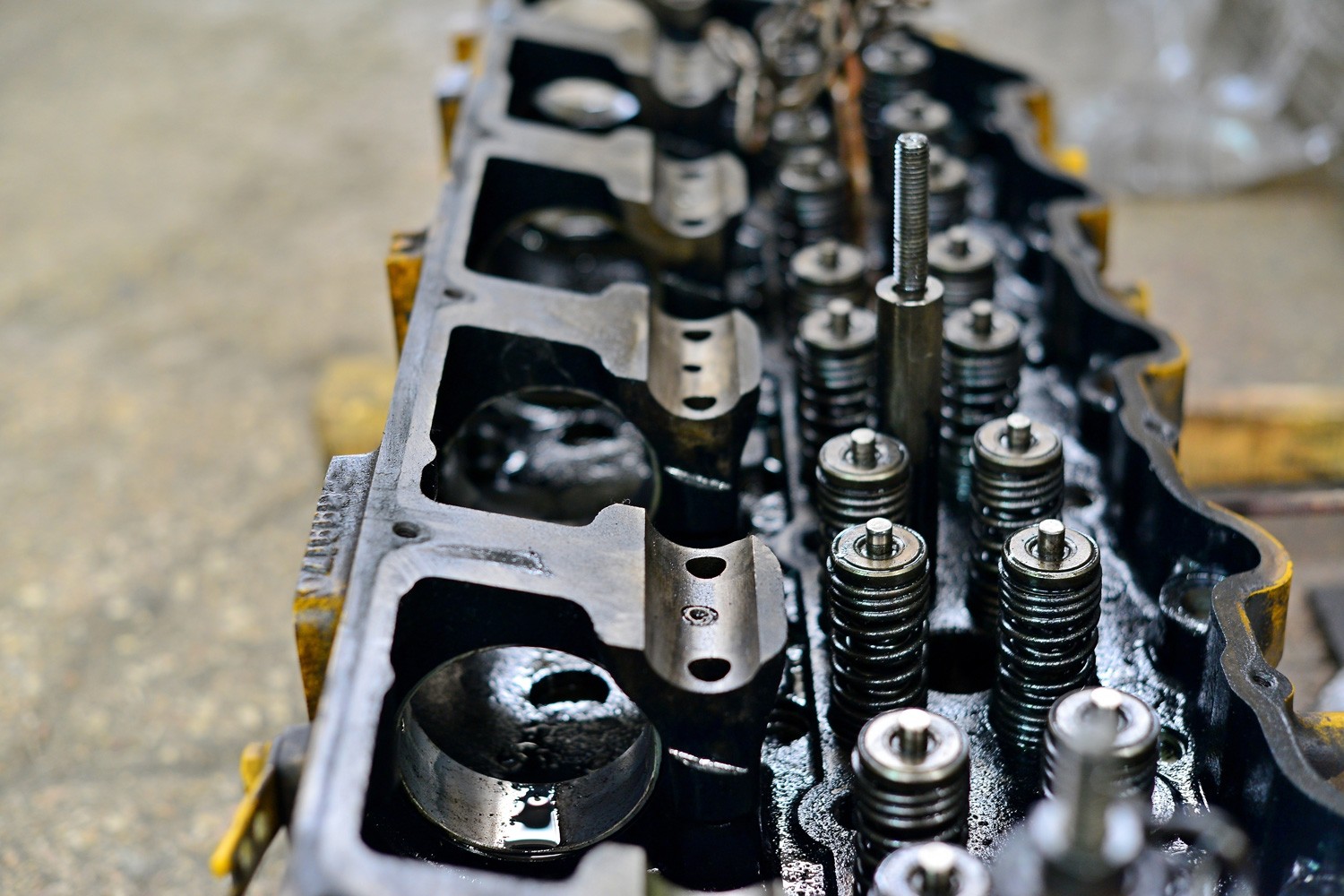 Is There Anything You Can Do To Prevent Head Gasket From Failing?

Head gaskets will eventually fail, no matter how much TLC you give them. However, you can extend the life of your head gasket by observing time-honored practices. One of them is to avoid stepping on the gas pedal and hitting the road shortly after turning the engine on.

Modern head gaskets are made of multi-layered steel. When steel experiences a sudden change in temperature from cold to heat, it will cause its atomic structure to expand instantly.

On the other hand, turning the engine on and waiting for the engine to reach the operating temperature allows the head gasket to slowly expand as it adjusts to the new temperature.

What Is The Average Lifespan Of A Head Gasket? 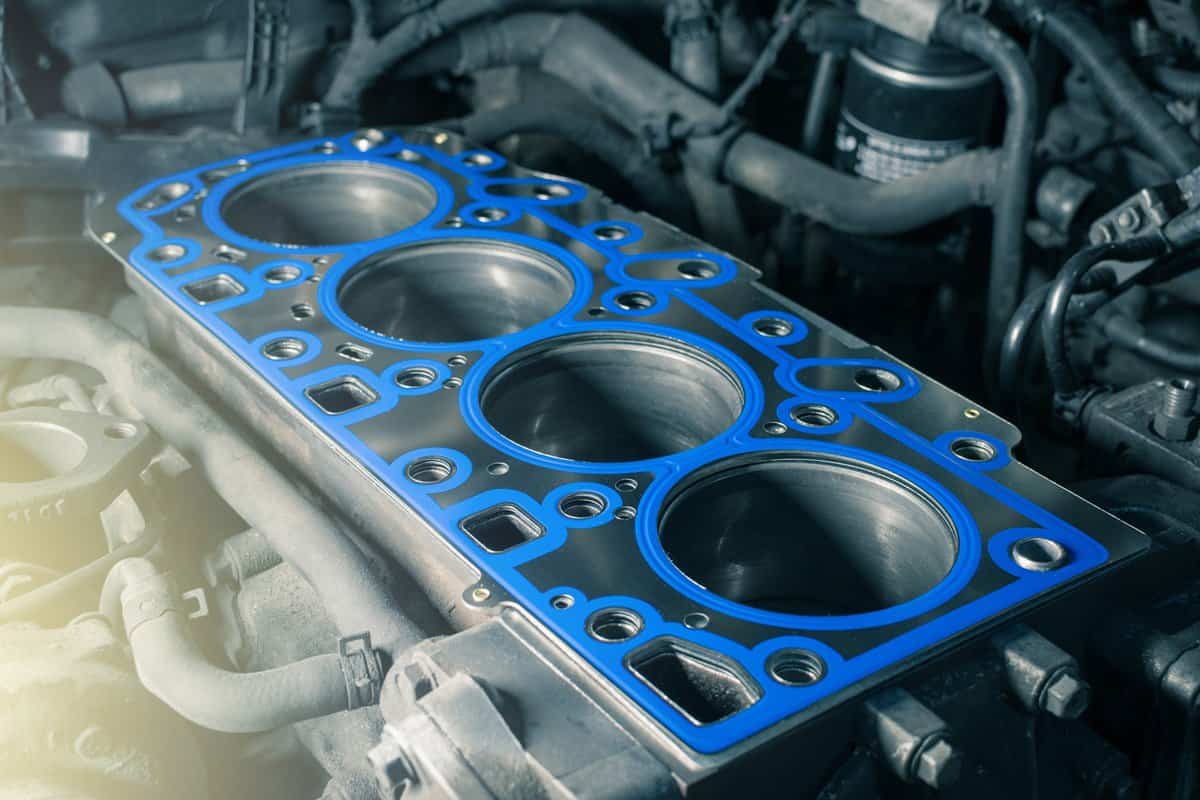 The typical lifespan of a head gasket depends on many factors. The quality of the head gasket, how effective and efficient the car's cooling system is, the type of car, and the climate in which it operates are a few of these factors.

When an old head gasket is reused, it doesn't fit properly and is no longer effective. This is because it doesn't have the same compression strength as when it was first installed. It can also cause leaks, which will damage the engine. If you are replacing your head gasket, be sure to buy a new one. Do not reuse!

Should I Use Copper Spray On My Head Gasket; [How To]?

Head Gasket Not Sealing; Why And What To Do?