Are you planning to add more power to the V6 engine of your Nissan Maxima, and you’re wondering if it can be fitted with a turbo or supercharger? We researched this question thoroughly to bring you the best answer.

You’d be glad to know that the Nissan Maxima can be equipped with either a turbo or a supercharger.

Turbos and superchargers work almost in the same way. Their main difference is how they are powered and how they perform their function. Let’s talk more about these two in detail so that you’d know what to get for your Nissan Maxima. Read on! 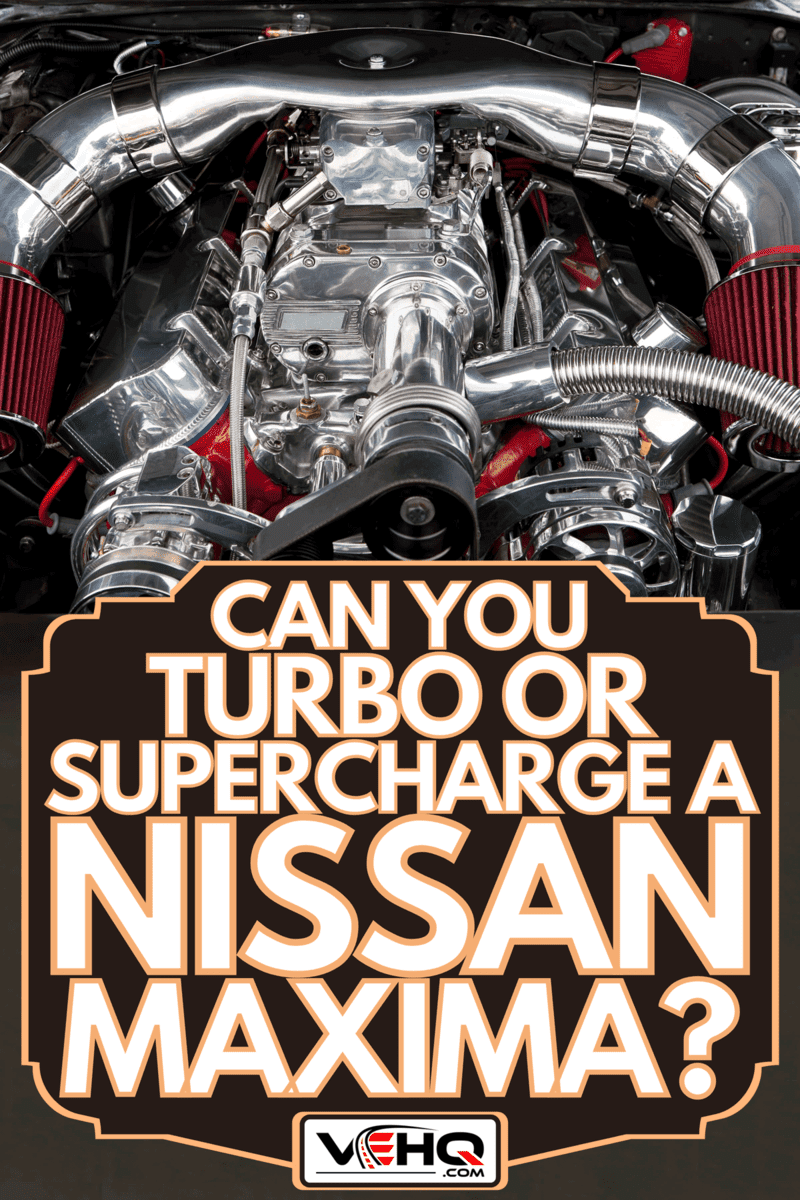 Turbo or supercharger for a Nissan Maxima?

Turbos and superchargers were developed by different people and for different applications but ended up serving the same purpose. 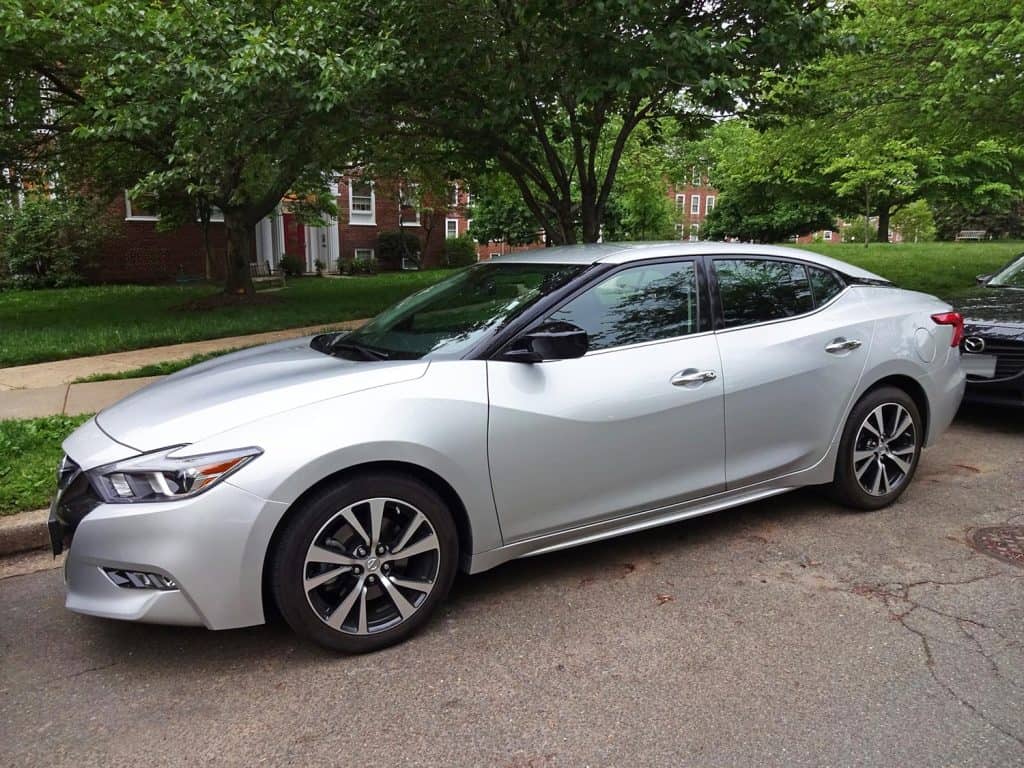 However, the term supercharger nowadays is only used to refer to forced induction devices that are mechanically driven.

What drives a turbo? 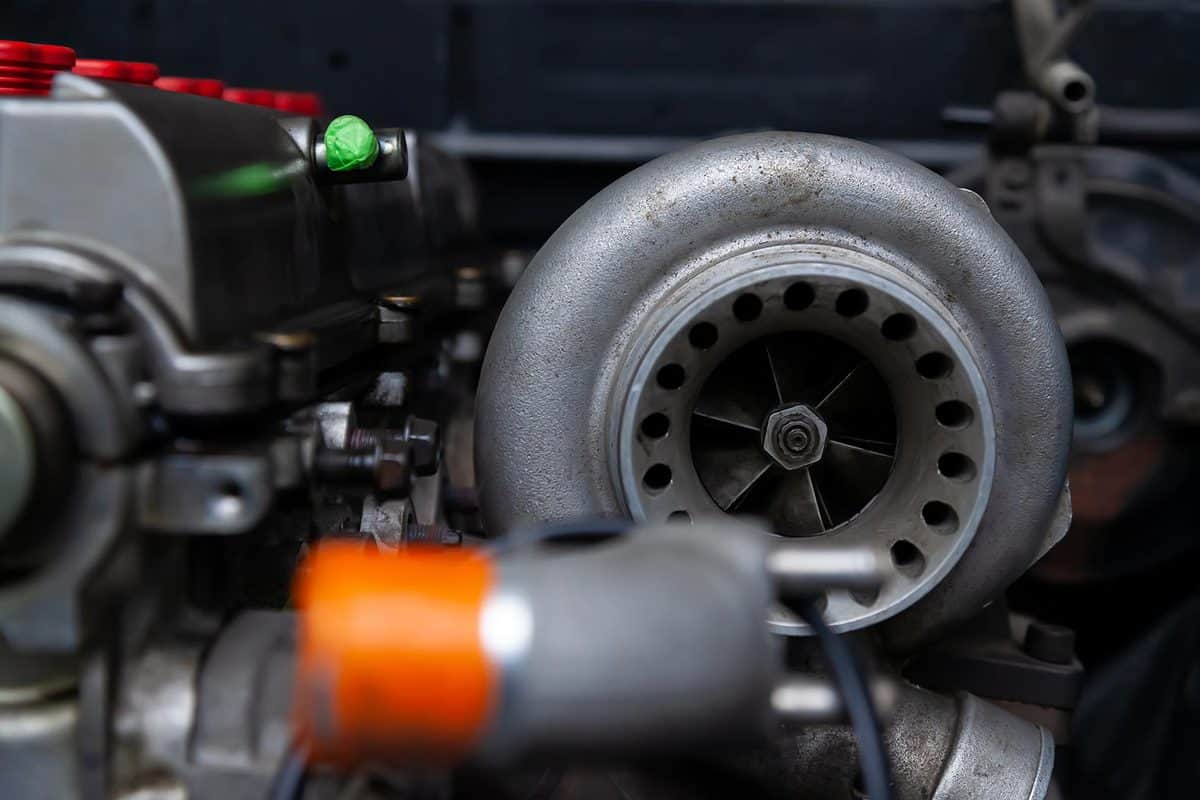 Turbos are powered by a turbine that uses the energy produced by exhaust gases.

How do turbos work?

The turbine from the hot side of the turbo is connected to an impeller on the opposite side. The impeller sucks in air from a filtered inlet as it spins. The sucked-in air is compressed and is then pushed through the outlet channel and into the intercooler.

The compressive force increases the temperature of the air. The hot compressed air is sent to the intercooler to cool it down before it goes to the intake manifold.

Swiss engineer Alfred Büchi patented a design that used the exhaust gases of an engine to power a compressor in 1905. The compressor fed dense air into the combustion chamber of the engine. And thus, the idea of turbochargers were born.

What can compressed air do to your engine?

Compressed air allows your engine to bypass the limits of atmospheric pressure and engine size by increasing the amount of air sent into the combustion chamber. Increased amount of air means that the amount of fuel that can be burned is also increased. 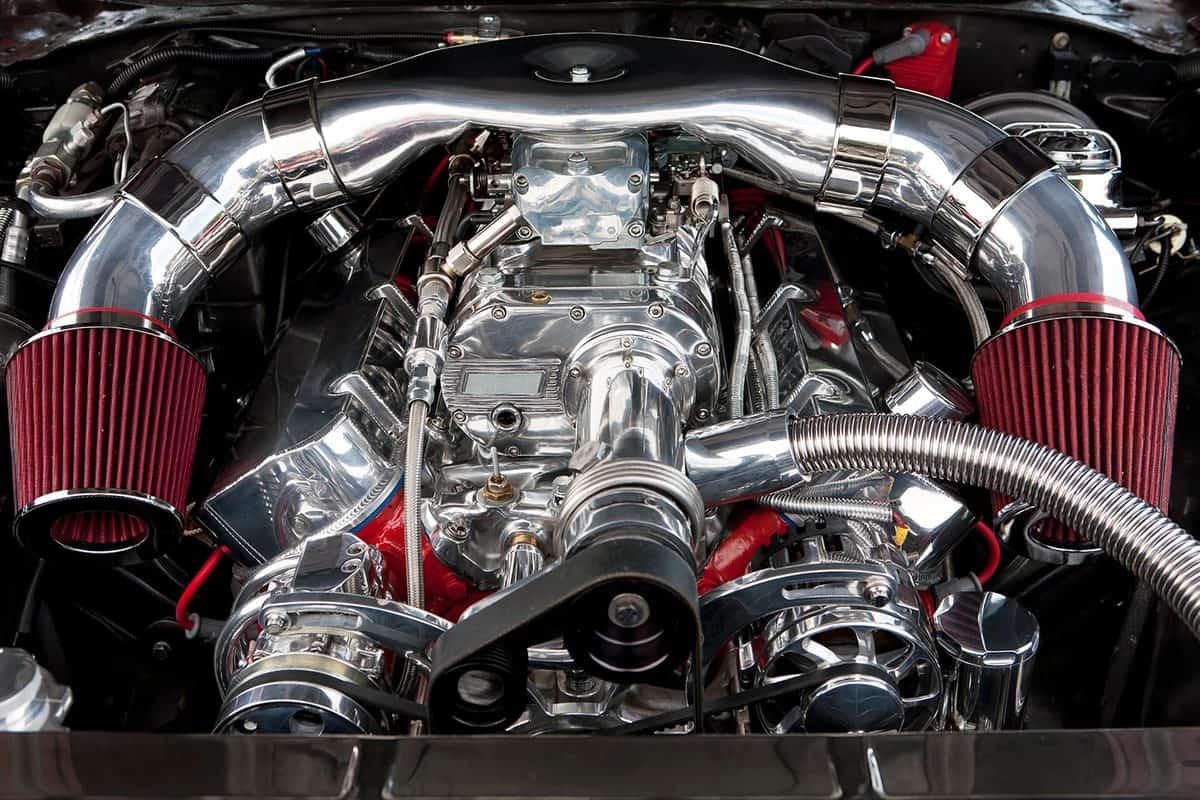 A supercharger is a specialized kind of air compressor that increases the density of air that goes into the engine of your Nissan Maxima. Compressed air allows your engine to get more air from each intake cycle.

Superchargers are powered by a belt or chain that is connected to the crankshaft of the engine. This is the same way some components of your Nissan Maxima are powered.

The crankshaft starts to rotate when you start your engine. The rotation of the crankshaft creates rotation in the supercharger through the belt or chain that connects the two.

Superchargers use the energy from the rotation of the crankshaft to accelerate the air to very high speeds. Air is drawn into the supercharger by an impeller. The centrifugal force generated by the rotation of the impeller throws the air into a compressor housing, turning high-speed air into high-pressure air.

A twin-screw supercharger, also called a Lysholm, is a positive displacement supercharger. This type of supercharger produces consistent air movement. This results in a consistent boost at any RPM, even right after you’ve started your engine.

Air is sucked from the intake at the back of the supercharger. The air is then compressed as it is forced towards the front.

The tapered design of the screw-like gears inside the twin-screw supercharger compresses the air along the tapered end before it is pushed into the intercooler and into the engine intake.

The roots supercharger is designed with two identical rotating lobes. These lobes trap air in the space between them as they rotate.

Air enters the inlet at the top, and then it gets moved around the outside of the rotors. The roots supercharger blows air through the intercooler and into the engine. Air gets stacked and compressed as more air is blown in. Compressed air increases the combustion inside the engine. This boosts engine performance.

Just like the twin-screw supercharger, the roots supercharger delivers the same amount of air regardless of RPM.

The roots supercharger design was first patented in 1860 by Philander and Francis Roots. It was initially designed to ventilate blast furnaces and mines.

Gottlieb Daimler or Daimler Benz patented its use on internal combustion engines. The first supercharged car was the Mercedes Kompressor model in 1923.

What are the advantages and disadvantages of turbos and superchargers?

Now that we have a good picture of how turbos and superchargers work, it’s time to get a good view of the rest of the advantages of each type and the disadvantages. 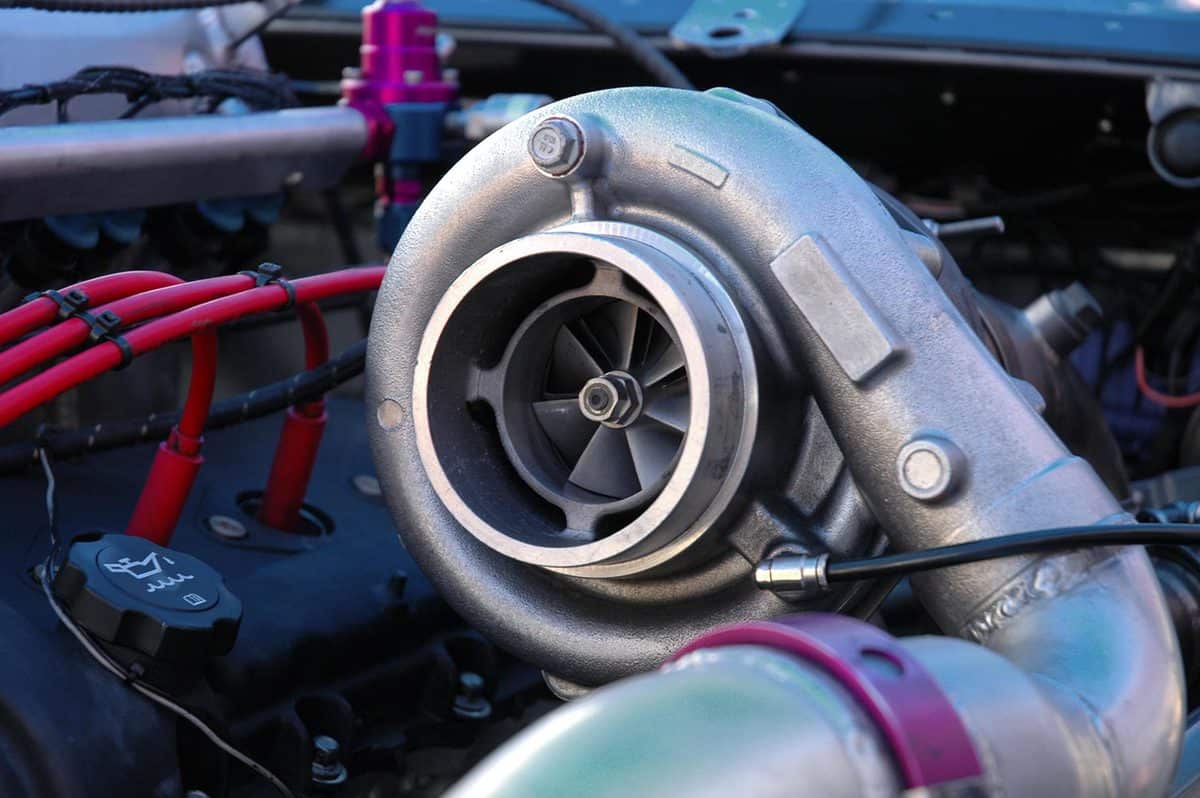 We all know that turbochargers increase the power output of engines. However, there are other advantages that it can bring to the table.

Turbochargers also improve car efficiency because it uses wasted energy from the car’s exhaust to power itself. It is easier to find a location to install a turbocharger inside the engine area of your car.

The biggest disadvantage of a turbocharger is lag. It needs time to spool up before it can provide any useful boost. Because of this, they do not work too well at low RPM.

Another disadvantage is the size of turbochargers. They are often designed to match engines within a specific RPM range.

Turbochargers can get very hot, and they often tap into the oil supply of the engine for lubrication. This might require additional plumbing in some turbocharger models.

Advantages and disadvantages of superchargers

There are three main types of superchargers that have their own set of advantages and disadvantages. So, we will be talking about them separately.

The boost level that it can provide is higher than other superchargers on a per-size basis.

However, centrifugal superchargers behave like turbochargers. They need time to spool and thus have a lag time before they can provide any meaningful increase in power.

And similar to turbochargers, centrifugal superchargers also do not work well at low RPMs. Another disadvantage is that it needs engine oil.

The main advantage of a twin-screw supercharger is that the power boost that it provides is consistent at any RPM. It is also quieter than other superchargers.

It creates continuous compression and discharges compressed air regardless of the need for a boost at low speeds. The twin-screw supercharger has heating issues but is less compared to roots superchargers.

Another advantage of the roots supercharger is that it doesn’t use engine oil. It does have its own oil chamber and needs to be supplied with its own special oil.

It also draws the most power from its parasitic connection of all three types of superchargers.

Additionally, it is very difficult to install because it needs to be installed on top of the engine. Moreover, modification is needed on the inlet manifold to install a roots supercharger.

The roots supercharger requires the most maintenance of the three types, and it can significantly reduce the MPG of a car.

The Nissan Maxima can be equipped with either a turbo or a supercharger. Choosing between these two—including the subtypes of superchargers—is dependent on personal preference.

Does The Buick Encore Have A Turbo?