If you're stranded with a dead battery, and someone offers to jump-start it, you might have some questions about this process. One common question is how long it will take to charge the battery. We researched the science behind jumpstarting car batteries from various professional sources so that you'll know for sure how long it will take to get it charged.

If your car battery is still usable, your car will start up a few moments after the battery has been connected to the donor battery. But even though the battery has enough juice to start your vehicle, it doesn't mean that it is fully charged.

To fully charge your battery, you will need to keep your car running for at least 20 minutes after it has been jump-started.

Now that we know how long it takes to charge the battery, we'll look at all of the steps you need to take to jump your car battery. You might also be curious if revving the engine will charge the battery or if the car battery can die from just sitting. Keep reading this post for all the answers to these questions and more! 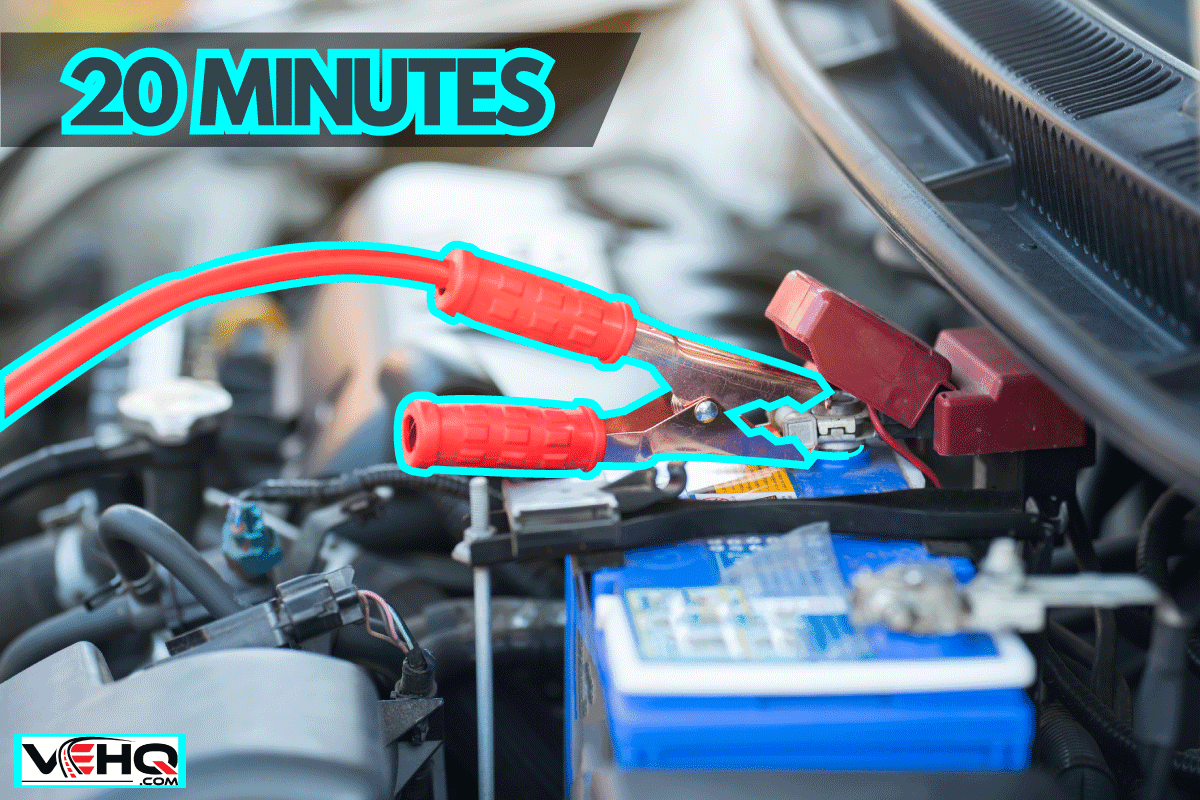 How Do You Jumpstart A Car Battery?

Jump-starting a battery is more complicated than just hooking up the jumper cables to the battery terminals. For starters, you'll want to make sure they are connected in the proper order.

Failure to follow proper procedure when jumping a battery can damage one or both vehicles and pose potential safety risks to you.

If you've never jumped a car battery before, or it's been a bit since you last did it and need a refresher, we've outlined the entire process below in some easy-to-follow steps. 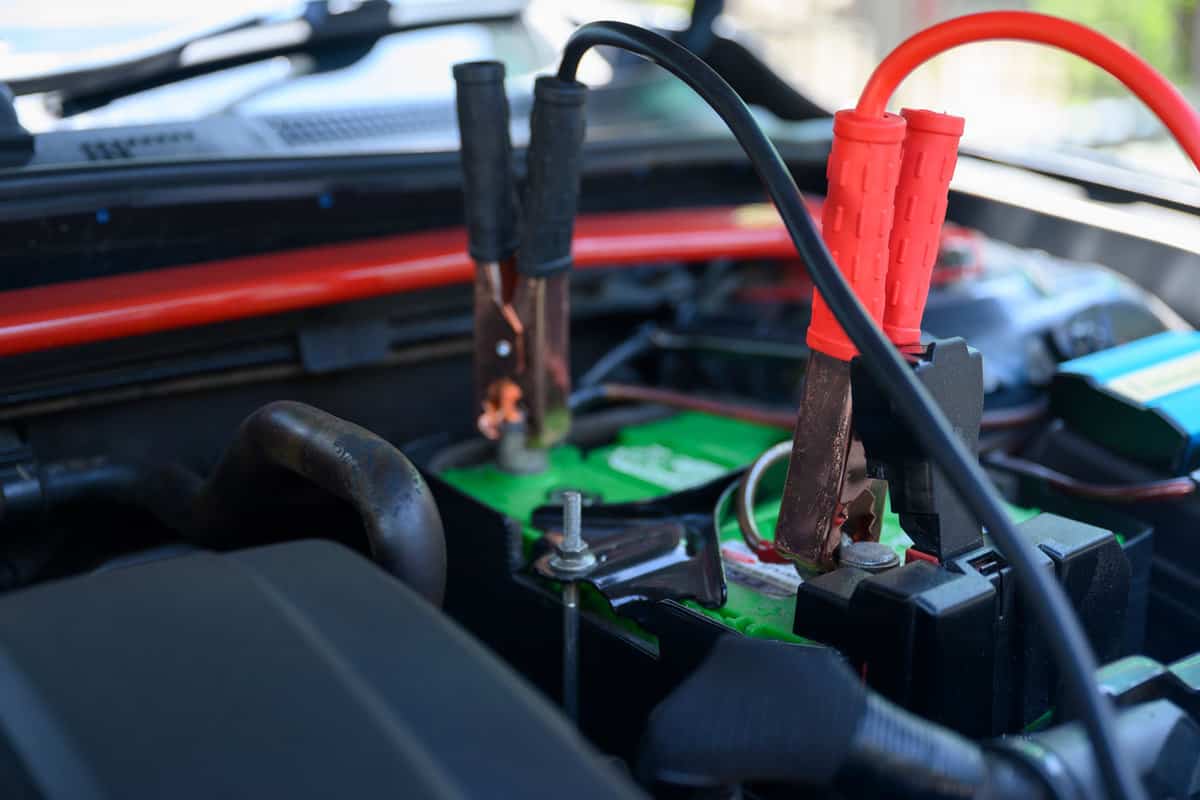 You'll want to park the car with the donor battery strategically. Parking it so that the two batteries are close together is recommended.

Sometimes, this won't be possible, but this shouldn't be an issue as the cables are long. Once the donor car is safely parked, you'll need to pop open its hood.

Attach The Cables In The Correct Order

This step is crucial. Attaching the cables in the wrong places or out of order can damage the cars. It also poses a safety risk to you and anyone else close by.

With the donor car running, attach one red (positive) cable clamp to the positive battery terminal of the donor battery.

Then, attach the other red (positive) cable clamp to the battery terminal on the dead battery. Be careful not to let the other clamps touch you or any other object!

Start The Car With The Dead Battery

You should be able to start the car with the dead battery. If it doesn't start, you might have a battery that will no longer hold a charge. This will mean that a new battery is needed.

Your battery won't be very charged right away. It's important to let your car run for a minimum of 20 minutes after it has been jumped.

The car's alternator functions as an electrical generator. But it only works whenever the engine is running. As long as the vehicle is running, the alternator will work to finish charging the battery.

Shutting off your car's engine too soon might result in the battery not having enough juice to start again. This means you'll have to arrange for yet another jump start.

For best practices, take a drive after you've been jumped to ensure that the battery gets fully recharged.

Does Revving The Engine Charge The Car Battery?

You may have heard before that you can charge the battery faster if you rev the engine. This is technically true but not always the best way to fully recharge your battery.

Revving the engine will make the crankshaft turn. This forces the alternator to work at its hardest. The more output from the alternator, the faster the battery is charged.

For best results, drive your car for a minimum of 20 minutes. The acceleration from driving will accomplish the same thing, and at least you'll be in motion and not stuck parked in a place that may not be safe.

How Do I Know If My Alternator Is Bad?

The alternator is essential for your car to continue running on battery power. Like all parts, they have a shelf life. Unfortunately, a failing alternator will share some of the same signs that a dead or dying battery will have.

Here are the most common signs that you have an alternator going bad.

As we pointed out earlier in this post, the alternator works as a small generator that constantly provides an electrical charge to your battery while your engine is running.

But when your alternator fails, it won't give as much of a charge.

Should the battery not get enough charge from the alternator, it can cause the car to stall. If this is a frequent occurrence, it's worth getting your alternator checked out by a mechanic or the dealership.

The Battery Light Is On

A weakening alternator won't be able to recharge the battery fully. The battery light on your instrument panel will light up when this happens. A mechanic will be able to determine which one is the cause.

Your alternator sits close to your vehicle's engine. The heat from this engine will heat the belts and other parts of the alternator. Over time, a weakened alternator belt will smell like burnt rubber.

Should any of the electrical components of the alternator begin to short out, you might notice a smell like an electrical fire.

It's possible that the alternator could begin to make squeaking or whining sounds. Should you notice any smells or sounds out of the ordinary, get your vehicle in for an inspection as soon as possible.

Your Lights Are Dim 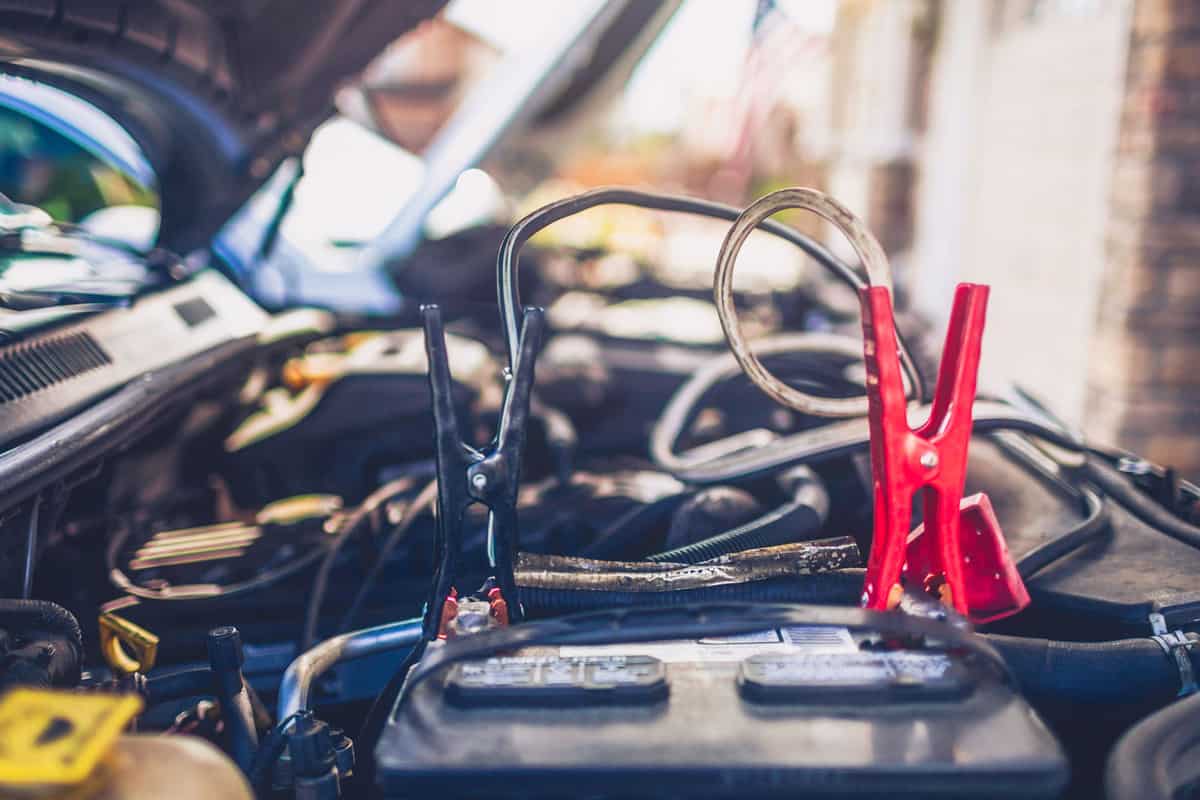 Should your battery not be charging correctly, the lighting might dim. The lights run off battery power, and a weak battery won't give them enough juice to fully illuminate.

This includes the headlights, exterior lighting, and any lighting onboard the vehicle.

How Long Should You Run A Car After Jumping It?

We outlined earlier in this post how long you should keep your vehicle running after the battery has been jump-started. During our research, we found sources that had varying minimum times.

Some suggested 10 minutes, while others indicated that you should run the vehicle for at least 30 minutes.

However, most professional sources online suggest a minimum of 20 minutes. You can do this by keeping the vehicle running idle for that amount of time, or you can opt to drive your car around. 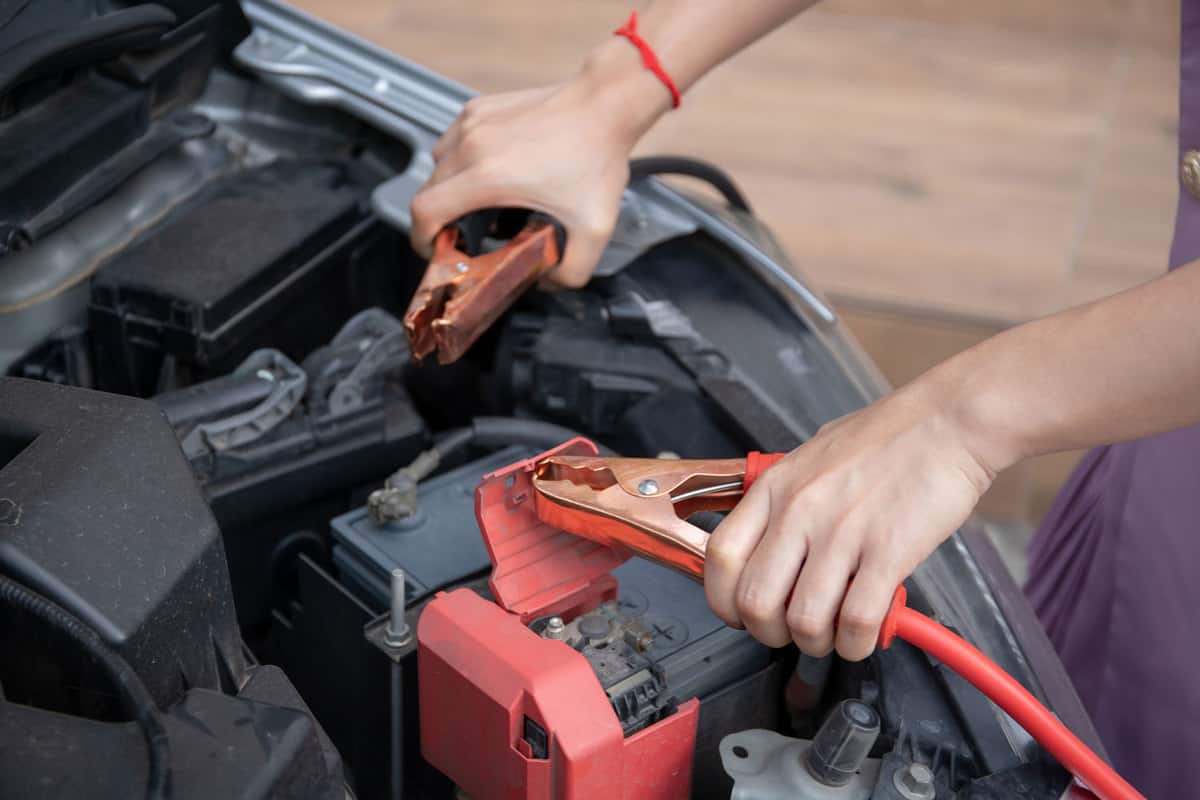 Can A Car Battery Go Dead From Just Sitting?

You might think that the battery is dormant if your vehicle isn't being used. It shouldn't lose a charge if it's not working, right?

In reality, a car that sits for some time will have a battery that slowly loses its charge. The battery provides small increments of power to the alarm system, onboard computer, and other components even parked.

Batteries will also slowly drain over time without anything connected to it. If you aren't using your vehicle much, be sure to have it started once a week.

Should you be unavailable to do this while away on a long trip, completely disconnect your battery beforehand so nothing will draw away its charge. 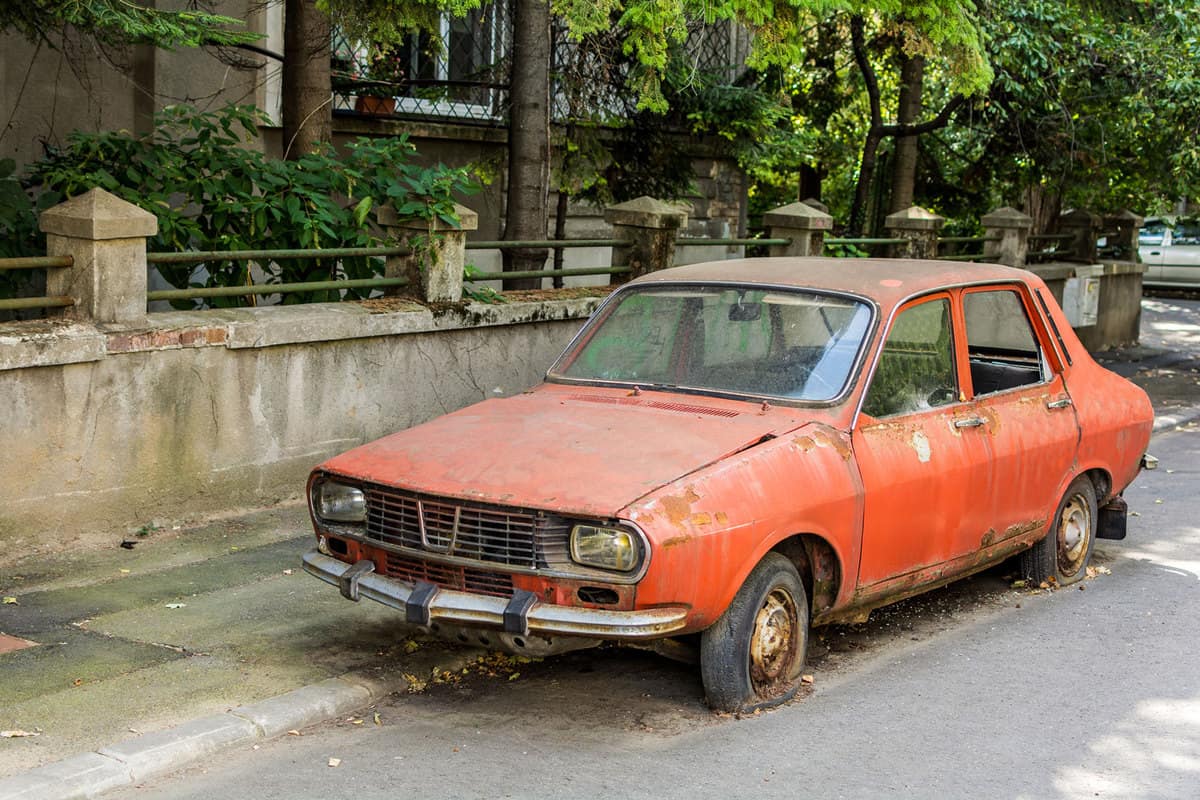 Can A Car Battery Be Too Dead To Jumpstart?

Batteries have a shelf life, just like every other part of your car. Most will last between three and five years before they need to be replaced.

There will come the point when your battery loses its ability to hold a charge. The older the battery, the greater the chance of this.

Should you attempt to jump-start your battery to no avail, the problem is almost always solved by getting a new battery. However, keep in mind that the alternator could also be the problem. 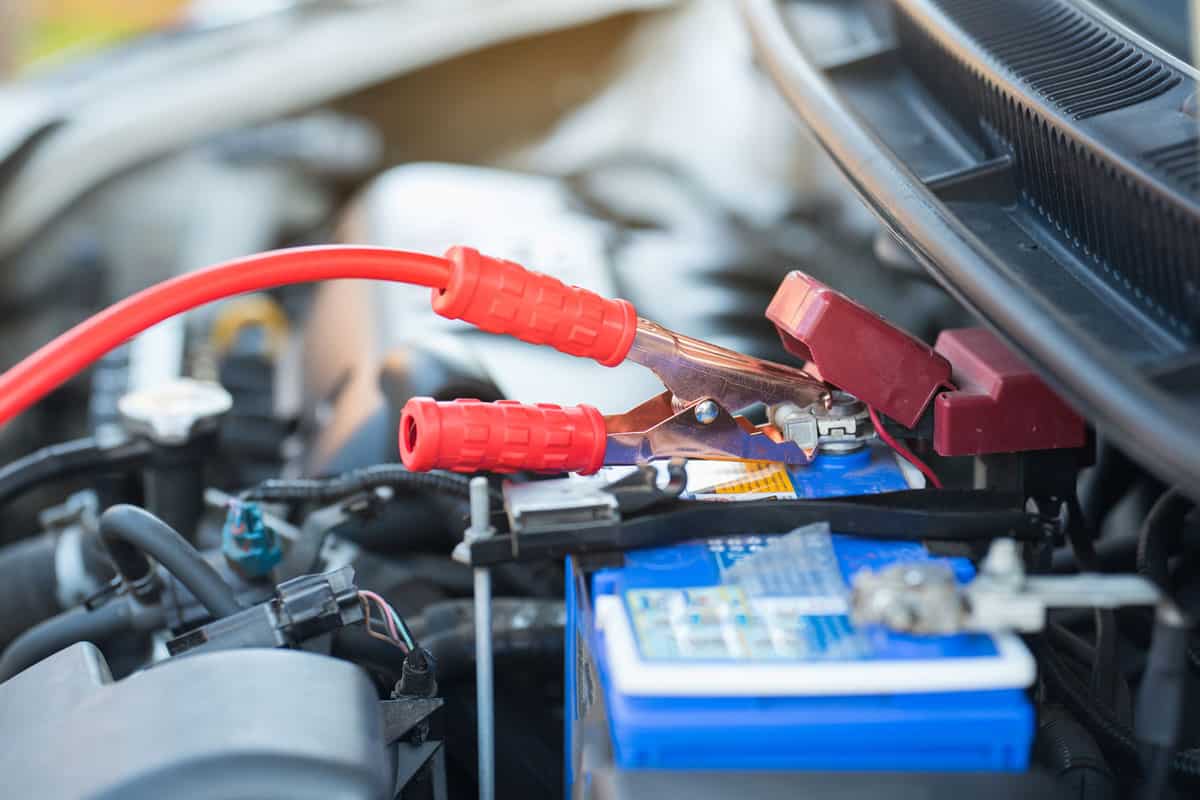 A car that has been jump-started should be able to start immediately after all the cables are correctly attached. Sometimes batteries can be too old and weak to be recharged with a jump and will need to be replaced.

A failing alternator can have the same symptoms as a dead battery, so be forewarned that you might need to get it inspected if you cannot successfully jump your car. Drive safe!

Made it to the end? Check out these helpful related vehicle posts!

Ignition Key Hot When Removed – Should I Do Anything About It?