For decades, minivans have been known to contain three rows of seats to allow for a capacity of six to eight people and have an abundance of storage space. Now that there is a new Chrysler Pacifica in town, you may have questions regarding whether it, too, has the 3rd row and if the model would suit your needs. Look no further, as we’ll lay out the details you’ve been searching for regarding this model’s seating features, as well as other need-to-know information in this post. 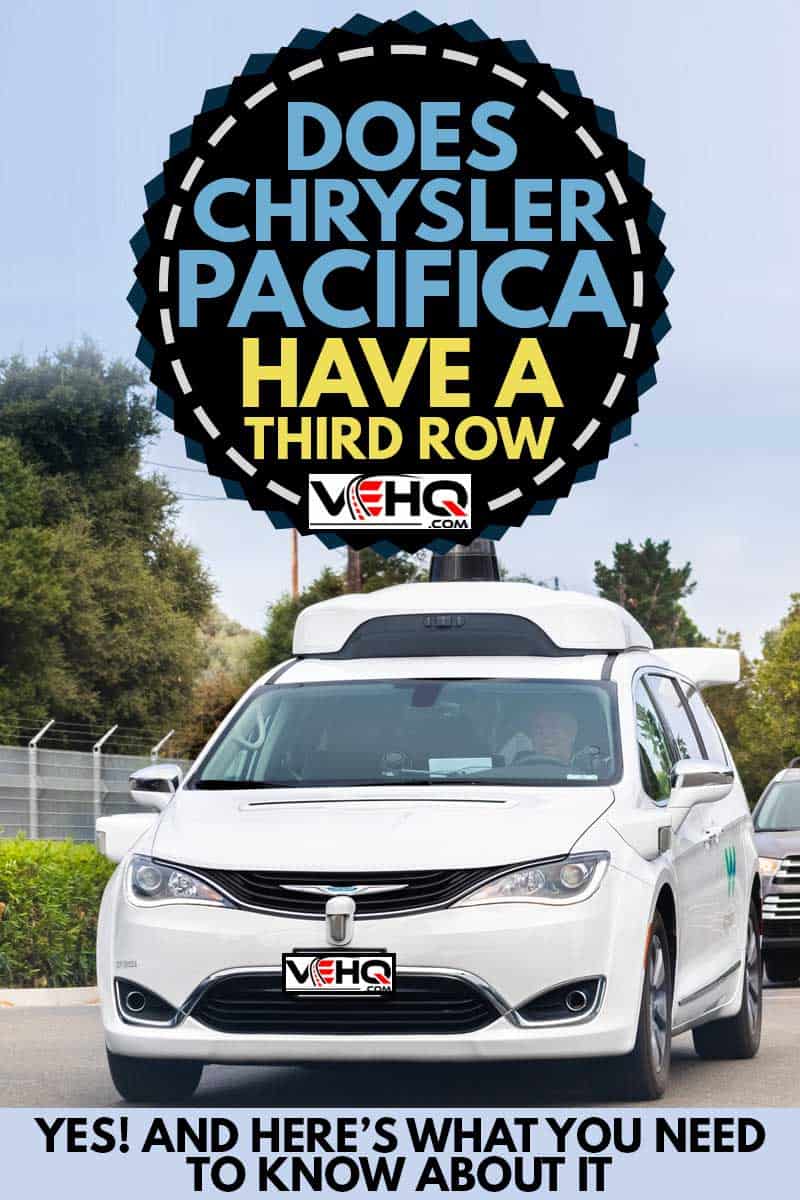 The 2020 Chrysler Pacifica does indeed come with a third row of seats. Like many minivans, this third row is a split-bench style, which seats up to three people. Each seat comes with its own headrest that is adjustable to allow for both children and adults to sit more comfortably. The third row is also collapsable, which you’ll learn more about later.

So, now that you know that the Chrysler Pacifica has a third row, you might be wondering what all of its features are and if they are altogether suitable for what you need. As you continue reading, we’ll help to answer some questions you might not have thought of, as well as the ones you have.

Okay, we have already established that, just like any typical minivan, the Chrysler Pacifica has a third row. The entire row itself is of a split-bench style. This means that the connected row of three seats can be split into two sections: one section as its own seat and the other as two connected seats. The two sections split approximately 40% for one side and 60% for the other. The percentage refers to the width of the vehicle.

As many people have experienced, it is usually a tight fit when one is trying to enter behind a second-row seat to get to the third row. Typically, one would have to fold the upper portion of a second-row seat to allow a person to squeeze through. For the Chrysler Pacifica Touring and Hybrid models, an attempt has been made to make this process a little easier. With the lift of a lever, the entire second-row seat will lift up and forward, even if it contains an installed child’s seat. This allows for some extra wiggle room. It should be noted, however, that accessibility will greatly depend on the size of each person.

Along with soft leather, and power-seating, this third row comes with its very own sunroof! Also, as previously mentioned, the seats come with adjustable headrests. Whether you intend to use the third row for children or adults, the seats are designed to suit either type of passenger. It has been said, however, that the third row would not be very comfortable for really tall people, as their heads would touch or nearly touch the ceiling while sitting. For example, a person who is 5 feet 10 inches tall would only have a few inches of space before his or her head touched the ceiling. For this person, there would also be only a few inches to spare for legroom.

How Many Does a Chrysler Pacifica Seat?

The simple answer is 7. The seating arrangements are as follows:

Can You Add An 8th Seat to Chrysler Pacifica?

If you find yourself needing an eighth seat for carpooling, sports events, or even beach trips, then you’re in luck. While the Touring models are designed to have a seating capacity of seven, it does allow you the option of adding an eighth, smaller seat in the middle of the second row. While this configuration is available in some models, the Hybrid models are designed to seat no more than seven people. Note that only certain Touring models allow for the customization of an eighth seat.

Yes! Both the second and third-row seats are collapsable and can be stored inside the floor. This is known as Stow ‘N Go. Whether you just need to collapse one seat, an entire row, or all the back passenger seats, you are able to do so. This is especially convenient if you need to transport large items, such as furniture or appliances, or a large load for trips, events, or moving.

Here is a video that will help you ">learn how to use the Stow 'N Go seats.

How Many Cups Does a Chrysler Pacifica Hold?

If there is one feature that should be considered an essential amenity of a vehicle, it should be the cup holder. Often at times, we may find ourselves lacking the necessary amount of holders for our beverages, especially in the rear seats. In this minivan, however, there are nine cup holders.

How Much Does the Chrysler Pacifica Cost?

By this point, you’ve learned a great deal about this upgraded minivan, so you’re probably wondering what numbers are on its price tag. While different dealers compete for the best price, the average cost of the 2020 Chrysler Pacifica is approximately $30,000, depending on any customizable options you wish to include.

Check price options for the Chrysler Pacifica model you’re interested in, and see if any of its customizable features fit your budget.

To Buy or Not to Buy

After reviewing the Chrysler Pacifica’s third-row specifications, along with other details, you may be able to decide if this minivan is right for you. Before acting, however, we suggest you weigh the pros and cons, analyze the reason why you would need a third row, and decide if the price suits your budget. I hope this information was helpful and happy shopping!

Vary informative with any problems the vehicle has had and what to look for in the future. I would like to know where you can buy seat covers for it ?