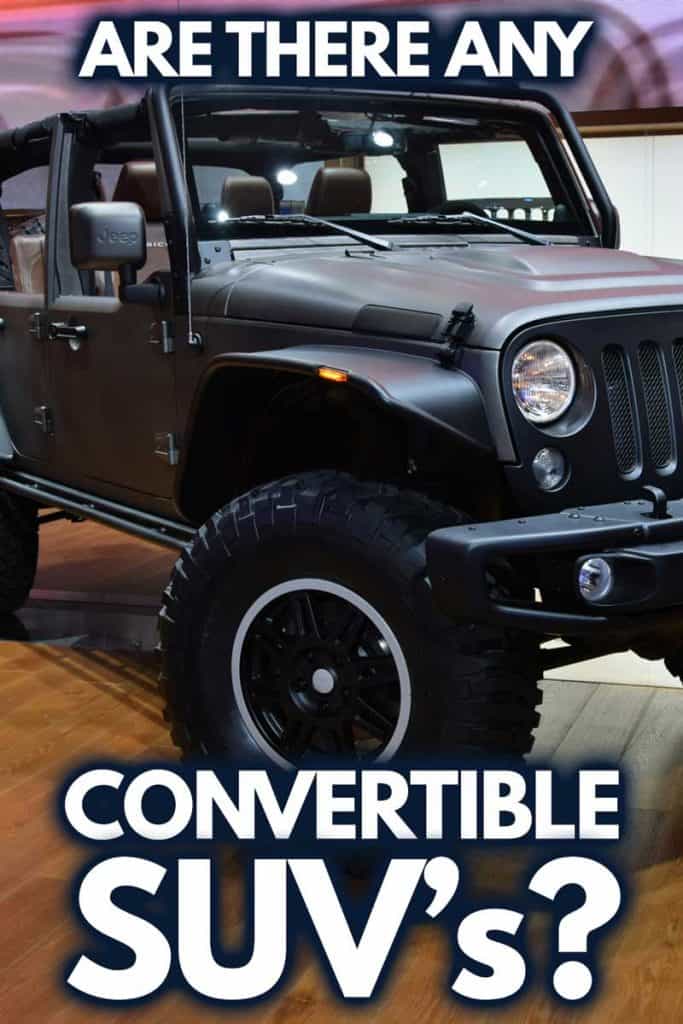 Sport utility vehicles (SUVs) are all the rage these days, but does owning one mean you don't get to enjoy a top-down motoring experience? To help answer this question, we'll bring you a list of all modern convertible SUVs. If you haven't noticed from driving around, there are not a lot of these models on the road. If you look hard, however, you can find a few. And here they are:

There are still some convertible SUVs you can buy. After the first and most common model, however, the list gets obscure quickly. Even including some recently-discontinued models, there are only four modern convertible SUVs to speak of:

So, there is a concise list of convertible SUVs. You only have one choice if you are after a brand-new model. Let's explore each model in more depth.

There are some older SUVs with removable roofs, like the Ford Bronco

and the International Scout.

More recently, Suzuki offered the cutesy X-90 with a removable roof, but this doesn't count as a true convertible:

The truth is, there are very few modern convertible SUVs. Most customers do not want to have to remove a big, massive fixed roof and store it somewhere in their garage. That means manufacturers look to traditional folding soft tops, but the engineering logistics involved get tricky and expensive fast.

Still, some brave manufacturers have attempted this feat in recent memory. Here they are:

By far, the most popular convertible SUV is the Jeep Wrangler. And not only does the top come off, but the doors do as well, for the ultimate open-air experience. Jeep offers the ultimate flexibility, making the Wrangler with both hard and soft tops.

As you can see, this model does leave a metal frame in place when the top is removed - perfect for off-road rollover protection. But this could turn away some convertible enthusiasts who prefer to have no barriers between themselves and the sky.

The 4th generation "JL" version of the Wrangler was introduced back in 2018. And Jeep offers more ways than ever to let some air inside the cabin on this new model. The Sky One-Touch Power Top allows you to retract the entire roof, while the fold-down windshield makes you genuinely feel like you are out in the open. Meanwhile, the doors and rear window panels can even be removed.

Currently, the model is offered with a choice of 3 engines: a 3.6-liter V6, a 2.0-liter turbocharged 4-cylinder, and a 3.0-liter EcoDiesel engine. The Wrangler also comes in either 2- or 4-door configurations. Starting at $28,295 for a 2-door Sport model, the Wrangler's starting MSRP maxes out at just under $42,000 for a Sahara Altitude model. Watch out for the options, however, as that price can easily climb over $50,000 if you are not careful!

For two glorious model years, Land Rover even got into the convertible SUV game, and it wasn't a Defender. This time, they built a convertible version of the stylish Range Rover Evoque 3-door SUV.

On this model, the roof is a retractable soft top under which there are still seats for four passengers. And, in true convertible fashion, trunk space was drastically reduced - down to just nine cubic feet. To accommodate the retractable roof, the third door (technically the hatch) was transformed into a drop-down tailgate on this version of the Evoque.

Land Rover was proud to announce at the model's introduction in 2015 that the new roofless Evoque was just as capable off-road and lost no significant rigidity during the conversion. The model was first sold as a 2017 model, and production ceased only one year later in 2018.

Built from 2011 to 2014, Nissan's convertible Murano (referred to as the CrossCabriolet) was another failed attempt to bring air to the hair of SUV drivers. Marketed as the first crossover AWD convertible, the Muran featured a striking profile with the roof down.

The Murano CrossCabriolet features a soft-top roof that folds into the trunk area. This roof features a rather unconventional bisected rear window that makes outward visibility a challenge. Reviewers found the ride of the CrossCab to be very compliant, so if you can find one of these funky rides to purchase, you are in for a creamy highway experience.

Using the same 3.5-liter V6 as other Muranos, this convertible crossover struggled to move its considerable mass (over 4,400 lbs). Unlike with the Evoque, converting this SUV into a convertible meant chopping off two doors. In the process, the front doors were lengthened by 8 inches, making tight parking spaces a challenge.

In the mood for something a bit more opulent? Well, how about way more opulent? As is the case with any vehicle carrying the "Maybach" nameplate, the G650 Landaulet offers unrivaled rear-seat luxury that includes a soft top that can open and close.  Just look at it:

As you can see, this isn't a full convertible - only the rear passengers get to enjoy the benefits of a roofless vehicle. Still, this is an exceptional vehicle worthy of mention on our list. This model also marks the first time Maybach has put their name on an SUV. Limited to just 99 units, the G650 Landaulet is marketed to the richest and flashiest people on the planet - case in point, pop star Drake owns the only G650 that was imported to North America. Estimates peg this model at around $500,000.

But this SUV isn't only about luxury - it also packs some real off-road prowess, thanks to its portal axles and locking differentials. And powering this beast is another serious piece of kit: a 621-horsepower twin-turbo V12. The standard G-class wheelbase has been stretched by 23 inches to create the excessive backseat space that allows the rear seats to lie nearly flat.

What Are The Pros And Cons Of a Convertible?

Now that we have found some convertible SUVs on the market, is this the right move for you? After all, vehicles often come with many implications we don't realize until after we buy them. To help you decide, here are the pros and cons of convertible ownership.

First, the most obvious advantage of owning a convertible - no roof! That means whenever you choose, you can drop the top and experience the rush of open-air driving. There is nothing quite like driving along with the wind in your hair, experiencing everything around you from the comfort of your driver's seat.

Read more: Which SUV Has The Most Legroom And Headroom?

Convertible drivers tend to attract a lot of attention, especially when driving with the top down. And convertible SUVs, maybe except for the Wrangler, are so rare that they elicit even more stares. That means you will be the talk of the town wherever you go.

Perhaps being looked at everywhere, you go isn't exactly a pro for you. For anyone who would instead go about their day anonymously, the idea of a people magnet might not sound so hot. So, any shy convertible lovers must weigh the pros and cons of this when deciding on their next vehicle purchase.

While SUV convertibles certainly have more space than, say, a Mazda Miata, they still come with a cargo room penalty. That's because the top has to go somewhere when it's stored. So, you will not have as much room for stuff in the back. The Jeep gets around this, sort of — you have to store the pieces you take off in your garage rather than in the back of the car.

Convertibles can also be more susceptible to deterioration, thanks to two things. First, they have more moving parts - the roof mechanism - which can wear out and require repair or replacement. Second, they leave the interior exposed to the elements, which means more sun damage, dust, dirt, and grime than your standard closed-roof vehicle.

Anyone who likes to store lots of belongings in their car should realize that owning a convertible will be risky. Anytime you park your car in public; there is no barrier preventing prying eyes and fingers from getting into your vehicle. That means you will have to quickly change your ways and keep all of your valuables locked away.

Is There a Four-Door Convertible?

Yes, there is - and it's right here on our list already. The Wrangler Unlimited comes with a removable roof as well as four doors. That makes it one unique ride - and that's not to mention its unparalleled off-road chops. No wonder it has attracted such a cult following! Aside from the Wrangler, there are currently no four-door convertibles on sale in the U.S., and there haven't been any for a long time.

While the list of modern open-air SUVs is a very short one, hopefully, this article helped you decide which one will work best for you. Whether it was the fantastic and extraordinarily expensive Mercedes-Maybach or the more common Jeep Wrangler, there are still some drop-top SUVs out there. Except for the Jeep, a minimal number of these SUVs were ever built, so finding one on the used market might not be such an easy task. That adds to the thrill for many SUV shoppers, so here's to hoping you can find your dream ride!

Before you go, be sure to check out these helpful guides -

Which SUV Has The Best Gas Mileage?

What's The Best SUV For Towing A Travel Trailer?