Are you planning to do an engine swap, and you’re looking into V8 engines to use? Do you want to know the difference between Ford’s Coyote engine and Chrysler’s Hemi? You’ve come to the right place, for we have researched this question and have the answer for you.

The Hemi is older than the Coyote. It has been around since the Second World War. The Coyote, on the other hand, is a newer member of Ford’s family of modular engines. It has a smaller displacement at only 5.0L. The Coyote also uses reinforcement webbing to improve the strength of the engine walls instead of making them thicker.

Let’s talk more about these two engines in the succeeding sections.

Almost every car enthusiast knows that a V8 engine has eight cylinders that form a V shape, hence its name. It has two banks of cylinders that each house four cylinders.

Both the Hemi and the Coyote are V8 engines. 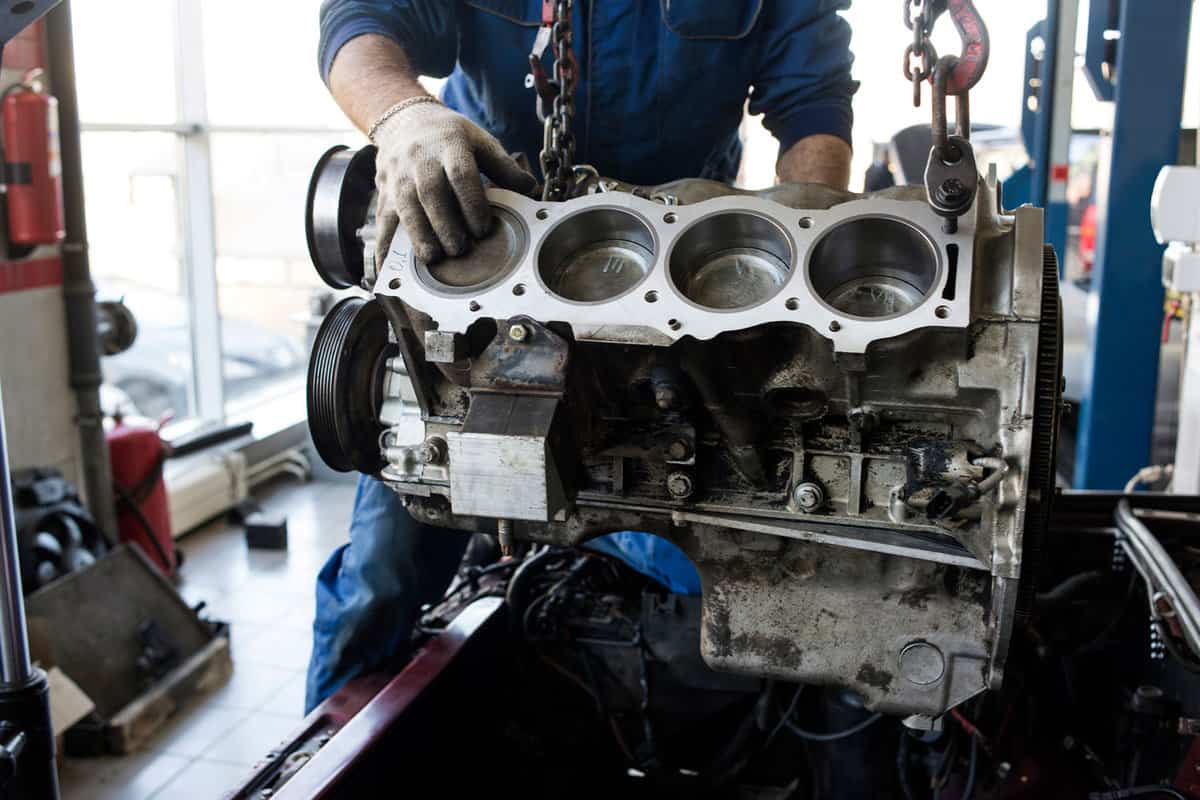 Most V8 engines have 90 degrees between the two arms that form the V shape of the cylinders.

The 90-degree V8 became popular because it uses the most stable angle for the cylinder banks. As a result, there is very little engine vibration from the V8 engine despite the power it produces and the displacement.

Unfortunately, designing an engine with a V angle of 90 degrees leads to a wider engine to accommodate the length of the cylinders that are at a 90-degree angle.

However, there are V8 engines that are made with a different V angle.

Moreover, there have been V8 engines that use extremely narrow V angles of 14 degrees to 24 degrees. Some race car V8 engines use a V angle of 45 degrees.

Manufacturers use special support for V8 engines that do not use a V angle of 90 degrees to reduce the vibration of the angle.

There are two types of crankshafts in V8 engines. The type of crankshaft often determines the rumble of the engine that car enthusiasts love.

The first type is the flat-plane crankshaft. This type of crankshaft has crank pins in a single plane, or the space between the crank throws is 180 degrees. If you run cardboard across the length of the crankshaft, all the crank pins will intersect the cardboard.

Crank pins or a crankpin is a cylindrical metal rod connecting the crankshaft and each cylinder's connecting rod. The cylindrical shape allows it to rotate and convert the lateral motion of the pistons to a rotational motion that powers the engine.

The flat-plane crankshaft is common in race cars and European performance cars. They have higher operating RPMs but produce second-order vibration.

A good example is Ford’s modular V8 engines like Coyote. The crank throws of these V8 engines use a spacing of 90 degrees.

Introduction To The Hemi 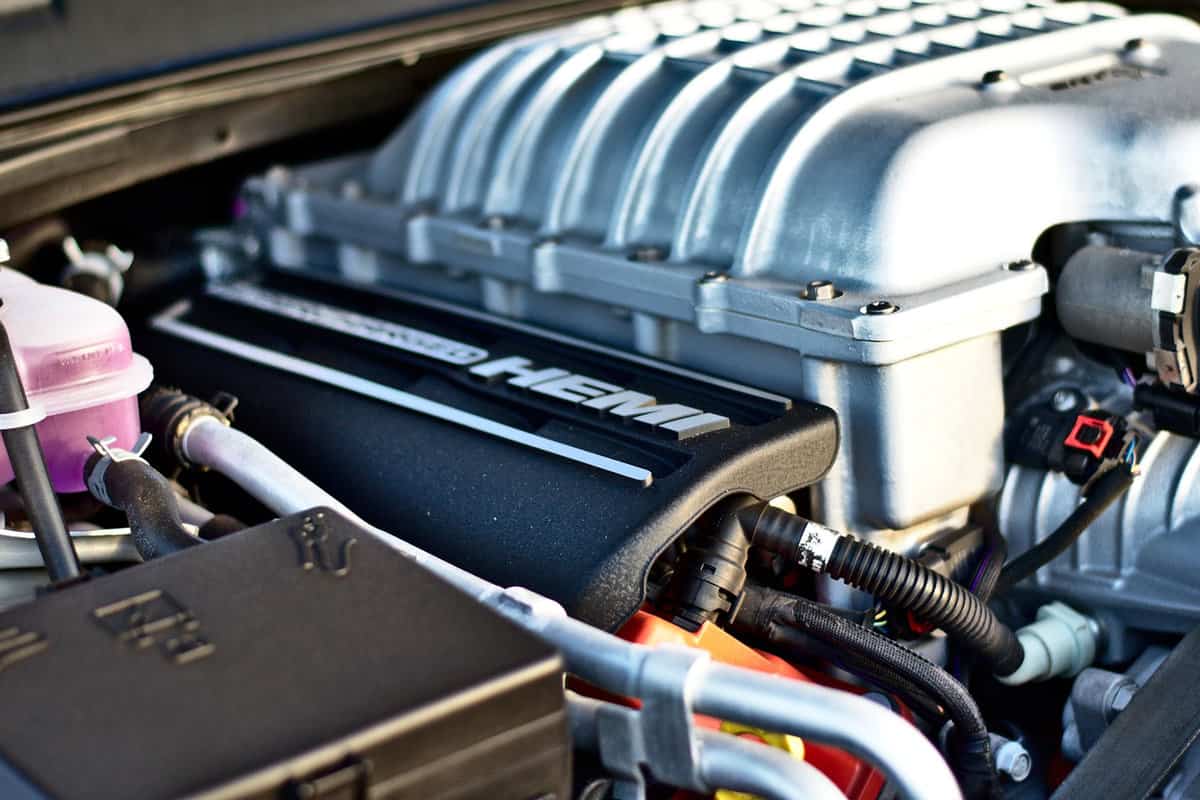 It is important to discuss the Hemi before comparing the Coyote and the Hemi.

The first Hemi came from a WW2 design that was supposed to be used for warplanes. However, with the war ending, the engine design was never implemented.

Fortunately, the research and development of those warplane engines gave Chrysler valuable information to develop their first V8 engine for consumer cars.

The first-generation Hemi was nicknamed FirePower (marketed as FirePower, not Hemi) and came out in the 1951 model year of vehicles. During that time, three of Chrysler’s divisions had their own versions of the Hemi engine for their own vehicles with no common part or specification.

Chrysler and Imperial called their Hemi FirePower, DeSoto’s version is FireDome, while Dodge’s smaller Hemi is the Red Ram.

Plymouth never had its own version until 1964.

The second version of the Hemi engine came out in 1964. This time, the engines were officially marketed as Hemi. It was around this time that Chrysler decided to trademark the name Hemi.

Keep in mind, however, that Chrysler is not the first nor the only car manufacturer that implemented the hemispherical cylinder head design in their engines. However, they were the first to commercialize the Hemi name for their engines.

This generation of Hemi engines had a displacement of 7.0L or 426 cubic inches. It was the biggest engine in NASCAR, with a 10.72-inch deck height and 4.80-inch bore spacing. It was not immediately available to the public when it first came out.

A street version Hemi engine was available to the public from 1965 to 1971.

The second generation of the Hemi engine ended production in 1971. The third generation Hemi came out in 2003.

Although it bears the Hemi name that Chrysler trademarked for its own use, the engine itself is no longer a true Hemi. It no longer has the characteristic hemispherical cylinder head that gave the Hemi its name. 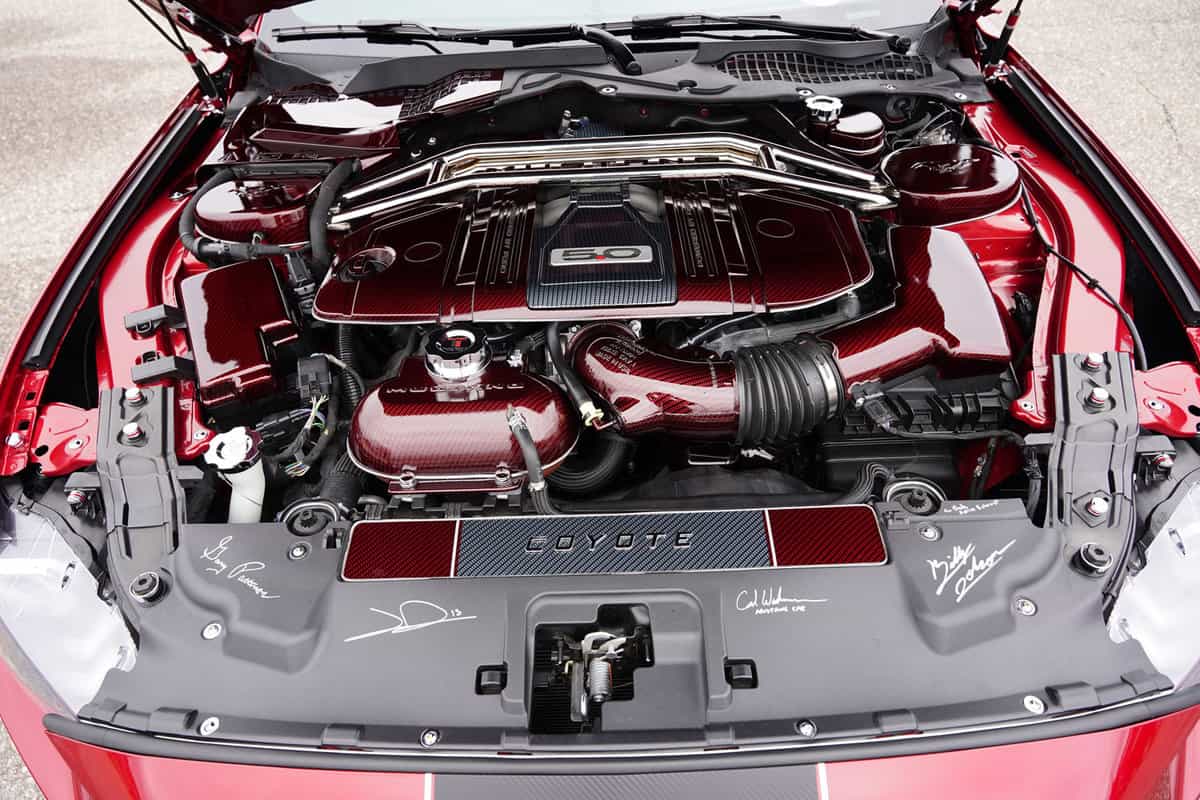 Here is the comparison between a Coyote and a Hemi on the important aspects of each engine.

The bore is the inside diameter of an engine’s cylinder, regardless of how many cylinders it might have. The stroke, on the other hand, is the distance each piston travels from the topmost position to the bottommost position inside the cylinder bore.

To get the total engine displacement, you multiply the cylinder displacement by the number of cylinders of the engine.

V8 engines with cylinders that have shorter strokes end up with higher horsepower. 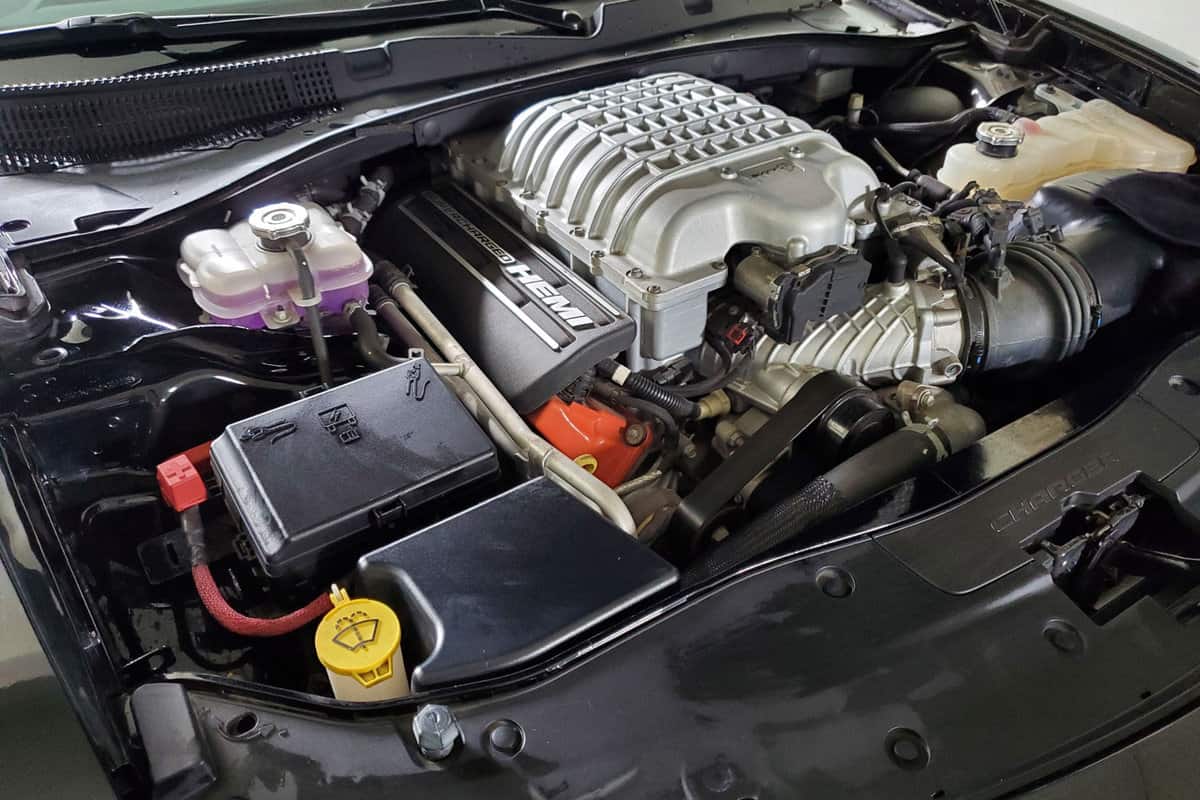 You can get the output horsepower of an engine by multiplying the torque and the RPM, then dividing that total by the constant 5,252.

When you study the equation above, the easiest way to increase the horsepower is to increase the RPM. There is no way to reduce the constant (the divisor 5,252) because that is a constant quantity. Increasing the torque can be done by installing a supercharger to increase the amount of fuel that the engine can consume.

The engine’s RPM is the number of revolutions that the engine can do per minute. If you shorten the distance that the pistons travel (or the stroke) to complete one revolution, then you increase RPM. Therefore, engines with shorter strokes will give you more RPM.

The Coyote has a displacement of 5.0 liters. It can generate a total of 460 horsepower.

The second-generation Hemi has a displacement of 7.0 liters and can generate a total of 425 horsepower.

Finally, the third generation Hemi has a displacement of 6.4 liters for the newest version and can generate up to 485 horsepower for the 2015 model year.

You can get the power output per liter per engine by dividing the total horsepower by the displacement. 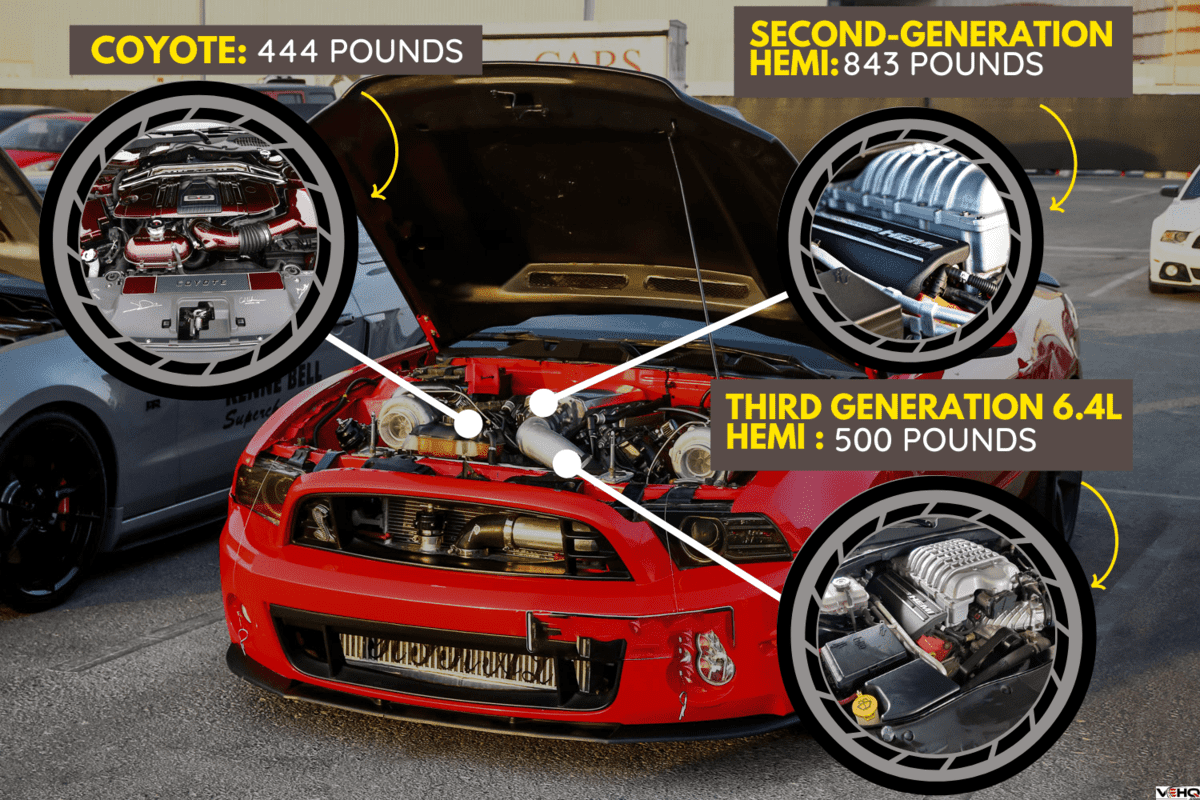 Weight is also important in considering a replacement engine. A heavy engine will require a heavier car chassis which will result in a heavy car.

Needless to say, a heavier car will use up most of the horsepower that the engine can produce. Thus, it is important to consider the weight of the engine too.

The engine weights below are dry weights. This means that the weight represents how heavy the engines are when it is empty of fuel and any other fluids.

There are many different factors to consider when choosing a new V8 engine. Raw horsepower is not the only deciding factor. Consider weight and displacement of the engine too.

If you found this article interesting, why not check the two articles below:

Can You Supercharge A 5.7 Hemi?

What Cars Have Coyote Engines?