The Ford Transit is a versatile van with room for numerous passengers, lots of cargo, or a mix of the two. If your Transit has four or five rows of seats, there may be times when you wish you had more space for cargo. Can you fold the seats down flat or even remove them to make room for bulky cargo items? We've done the research, and we have the answers for you!

The seats in the Ford Transit passenger van (10-15 passengers) do not fold down. However, they are removable. The rear seats are both foldable and removable in the smaller Ford Transit Connect (5-7 passengers).

In the remainder of this article, we'll give you step-by-step instructions for removing the seats from a 15-passenger Ford Transit van. We'll also describe how to fold and remove the back seats in a Ford Transit Connect van. Keep reading to learn more! 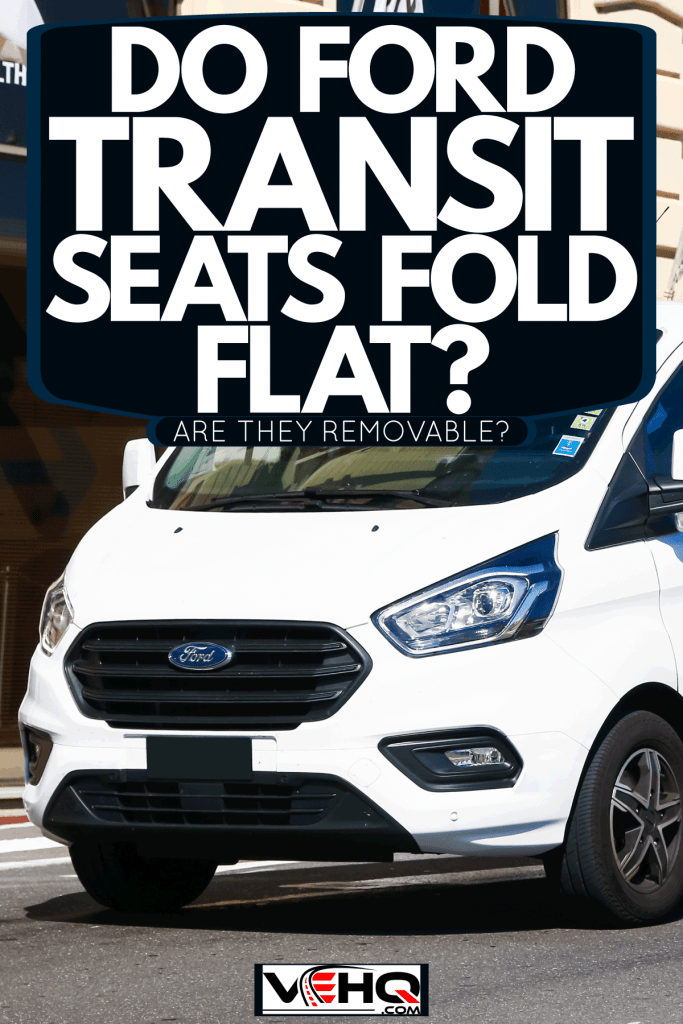 Do Ford Transit Seats Fold Flat And Are They Removable?

How To Remove Seats From The Ford Transit Passenger Van

The Ford Transit passenger van holds 10, 12, 14, or 15 seats. We'll describe how to remove the seats from a 15-passenger Transit van; you can use the same strategies on Transits with fewer seats.

If you're having trouble visualizing this, click here for Ford's official 2021 Transit brochure and scroll to page 14 to view the seating chart for a 15-passenger setup. Note that, in the third and fourth rows, respectively, seats 8 and 11 are mounted by themselves, unattached to any other seats. Seats 12 and 15 are also mounted individually in the back row, although you can't tell this from the diagram. This is important because you use a different strategy to remove individually-mounted seats.

This YouTube video provides a detailed visual demonstration of the steps. Because it's a lengthy video, we've indicated the time stamp where each seat removal segment begins:

Next, remove the paired seats in the fourth row (9-10) and then in the third row (6-7). These seats feature the same quick-release mechanism as seats 13-14, but they do not have rectangular handles and straps. (20:17 in the video)

Seats 3-4-5 form the second row and are all connected. They are equipped with quick-release levers, so you can remove them using the same technique you used on seats 9-10 and 6-7. (22:40 in the video). The only difference is that, with three seats instead of two, you will need to trip all three quick-release levers at once, so you may want someone to help you. It is easiest to remove seats 3-4-5 out of the sliding door on the side of the van rather than through the rear.

The 15-passenger Ford Transit has four free-standing seats bolted to the floor and bulkheads of the vehicle. Because these seats don't have quick-release levers, they are more cumbersome to remove. You need to locate two or three bolts in each case and use a ratchet to release them. Here's how to locate and remove the bolts for each seat.

After removing all the bolts from seats 12, 15, 11, or 8, press the top of the seat forward with your shoulder and pull the front base of the seatback until the front latches disengage. Then lift the seat and remove it from the van via the rear door.

The Ford Transit Connect SWB (short wheelbase) has bucket seats for the driver and front passenger and three foldable and removable seats in the back.

To remove one or more of the rear seats, complete steps 1 - 6 above. Once the seat is tumbled forward, locate the yellow release lever on the seat bottom. Pull the release lever and lift the seat up and out of its housing.

Ford Motor Company provides this ">video demonstration of folding and removing a rear seat in the Transit Connect SWB:

To fold down the 2nd-row seats in the Ford Transit Connect LWB (long wheelbase) van, follow these steps:

Once the 2nd- and 3rd-row seats have been folded down, you can create a seamless flat surface for easy stowing of cargo.

Click ">here to watch Ford's video of folding and removing the back seats in the Transit Connect LWB.

To remove the second and third-row seats in the Transit Connect LWB, grasp the yellow release levers under the seat bottoms, pull them forward until the seats unlatch, and lift them up and out.

Folding or removing the seats in your Ford Transit or Transit Connect can significantly increase the cargo space and flexibility of the vehicle. By following the guidelines above, you can customize your van to meet your needs at any given time.

You may also enjoy the following posts: