We've all seen them on the side of the interstate—a line of trucks waiting to have a state employee verify their weight. But is there ever a time that a pickup truck would need to stop at a weigh station? We researched the laws in depth so that you'll know for sure if your truck will need to pull over and get weighed.

In most cases, you will not need to have your pickup truck weighed at a weigh station. There are instances where this will be required, however, including driving a commercial vehicle or driving a vehicle with a combined gross weight of over 10,000 pounds.

Now that we know that you'll sometimes need to get your pickup truck weighed at a weigh station, we'll take a look at the scenarios that would require it. You might also be wondering why some trucks don't stop at weigh stations or what happens if you illegally avoid one. For the answers to these questions and more, read ahead in this post to see what our research has uncovered. 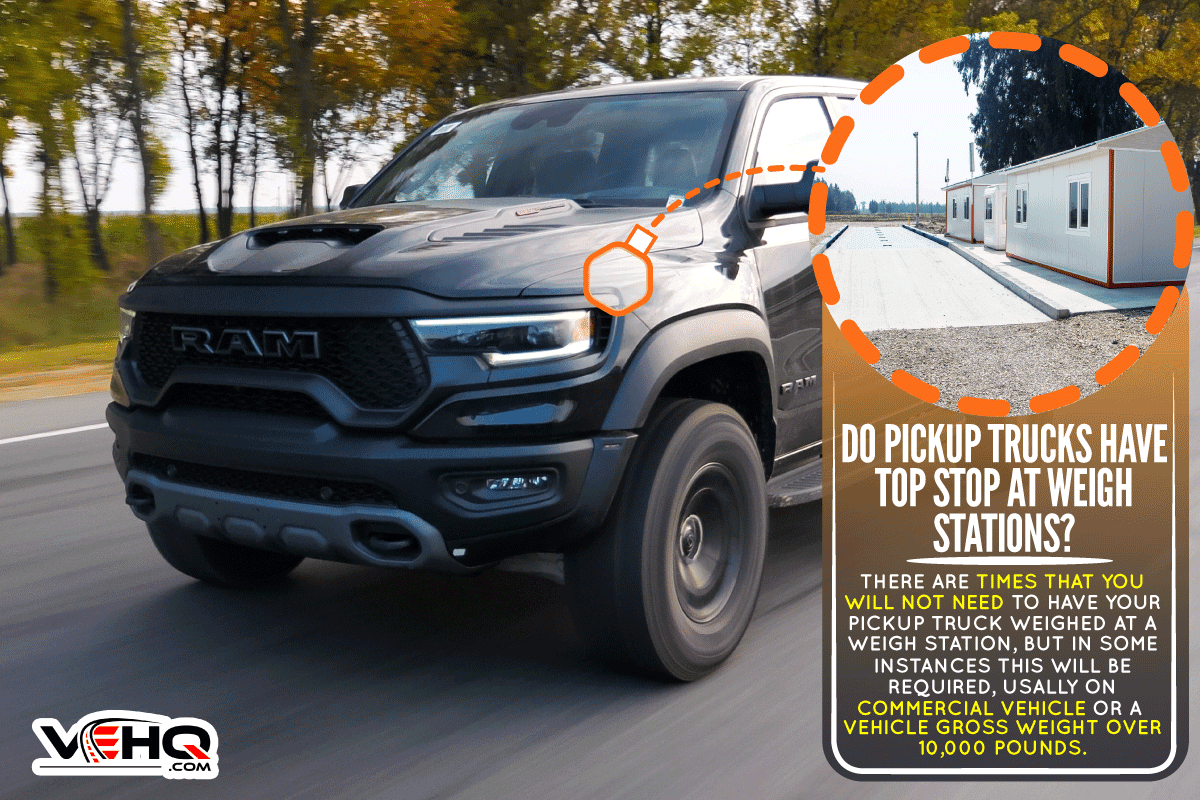 The majority of the time, it is commercial vehicles that will need to stop at weigh stations. In most cases, a privately owned pickup truck will not need to make this stop. There are some instances, however, where this will be necessary.

The familiar tractor trailers that you see on the interstates all need to stop and get weighed when passing an open weigh station. When operating a pickup truck, some states, like California, will also require you to stop if your truck is registered as a commercial vehicle.

This rule will also apply to moving trucks. Renting a U-Haul, even though you are using it to transport your items, can still be subject to a weigh station stop. Some states make these stops necessary but only if the trucks and cargo weigh over 10,000 pounds. 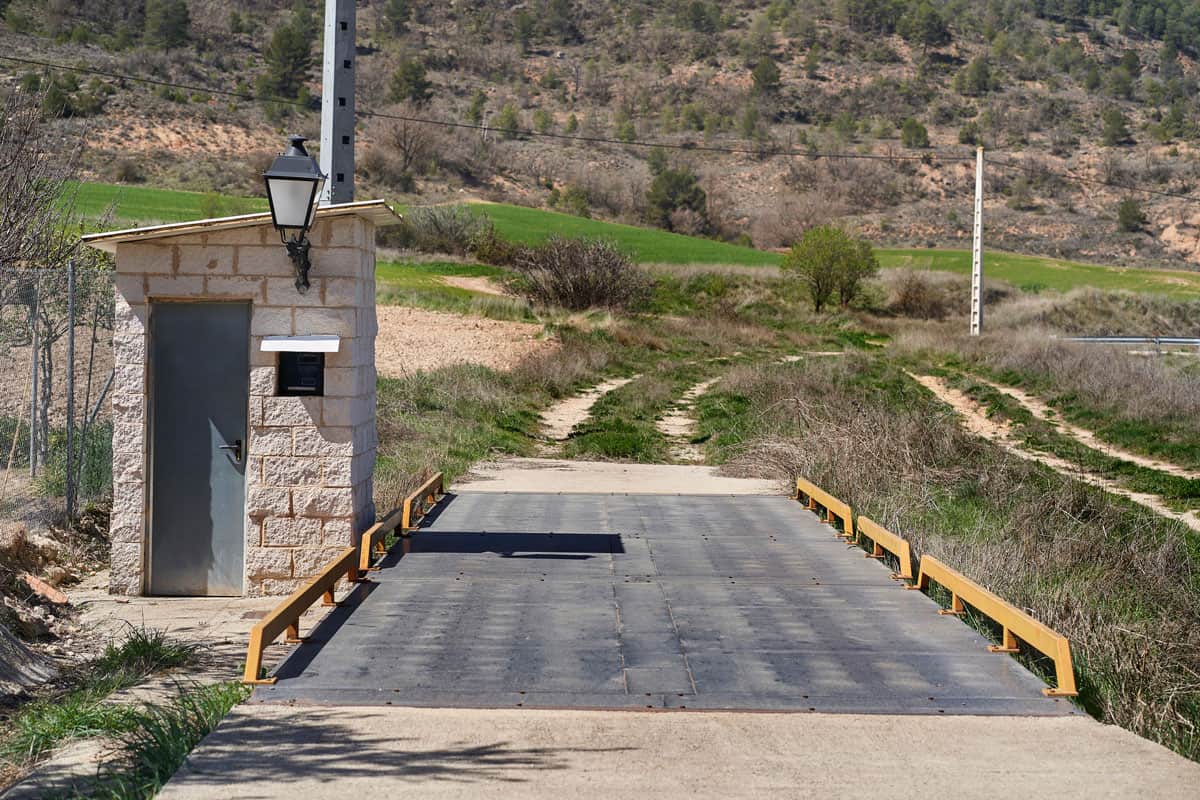 Why Do Some Trucks Not Stop At Weigh Stations?

You might see some tractor trailers whizz right by open weigh stations. Though your first reaction might be thinking that they are breaking the law, that is not usually the case.

Many weigh stations are equipped with software that will retrieve information from the truck without it needing to pull in and get weighed. In most locations, this means that the truck needs to be in the right lane closest to the station itself so that it will work. 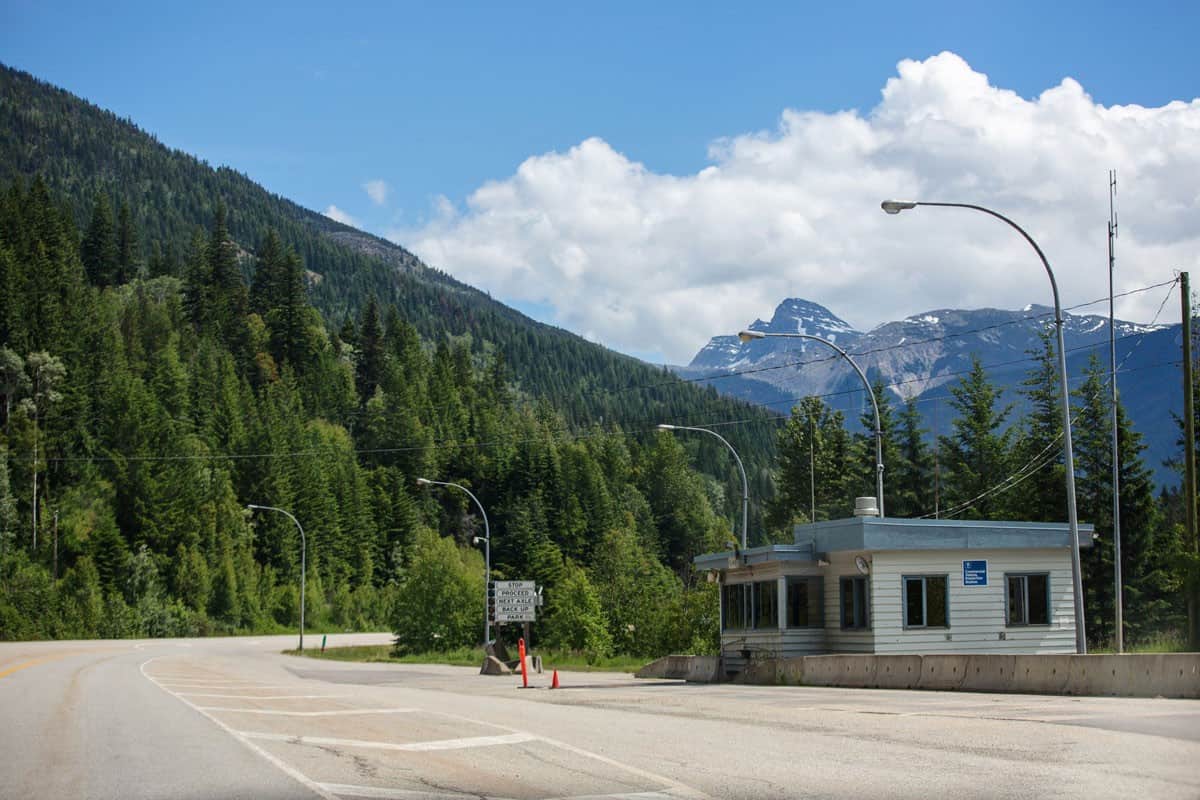 How Can You Avoid Weigh Stations?

If your vehicle is required to stop at a weigh station, you will have to make the stop at each open one that you pass. There are legal ways to avoid these stops, however.

There are multiple apps that commercial drivers use that allow them to legally bypass weigh stations. Services like Drivewyze will connect to the weigh stations, giving them the truck and operator information. This automatically relays data to the station personnel who can log it without you even slowing down.

This service saves a lot of time. Rather than pulling into the station and waiting to get weighed and inspected, the information is relayed as the truck approaches the station.

But apps aren't the only way to avoid weigh stations. You can always take more time to plan your route around these stops. Weigh stations aren't as common as you might think, and they aren't on every highway. An alternate route can allow you to legally bypass weigh stations.

You'll need to take some care in how you do this, however. Simply taking the last exit before the weigh station only to reemerge on the same roadway later sends up some red flags to police.

If the authorities suspect you are doing this with the sole intent of bypassing the weigh station, they can pull you over and force you back.

Plan Your Route When The Weigh Stations Are Closed

Weigh stations aren't usually open all hours of the day and night. It's also possible to plan a trip around when these locations are open.

If you are compliant with the law and your truck is legal and not over the weight limits, you have nothing to worry about. Though weigh stations can cost you some time, they serve an important purpose. It's best to stop when you are required to so that you avoid potential consequences. 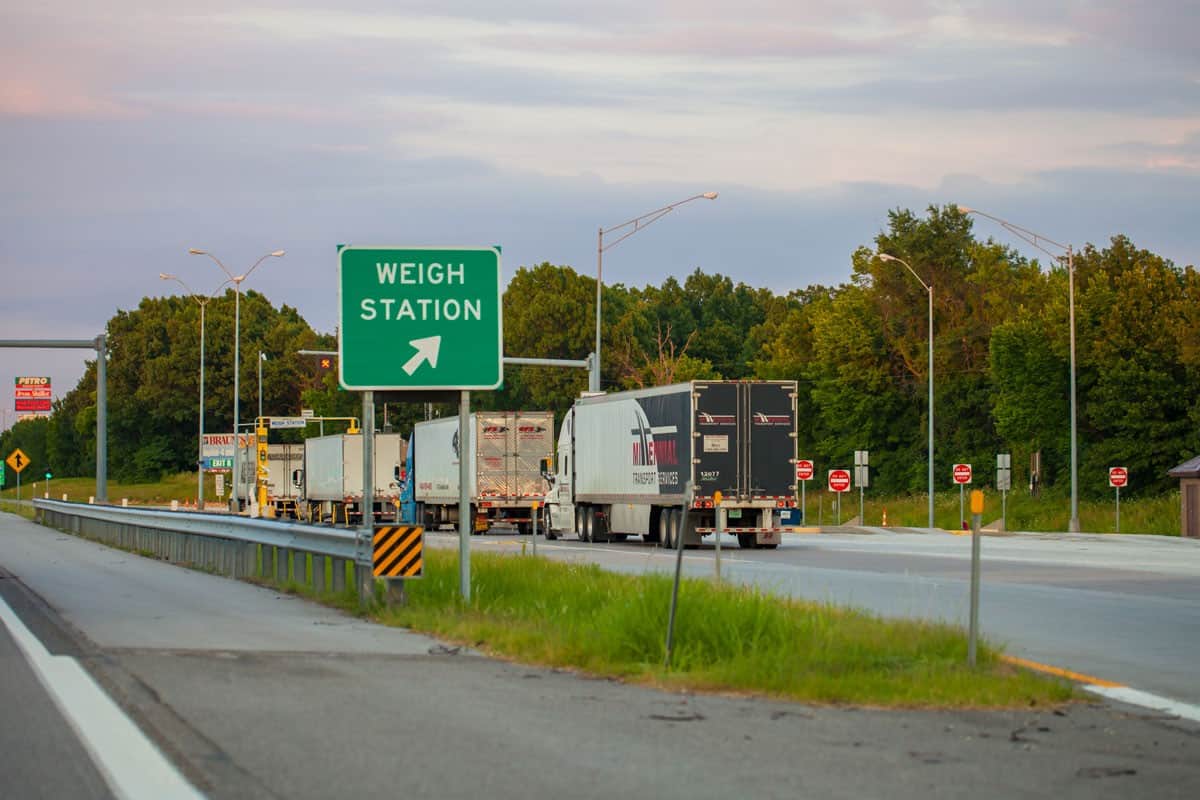 What Happens If I Illegally Avoid A Weigh Station?

If you intentionally avoid a weigh station, you will be violating the law. Any open weigh station requires you to stop and get weighed, and those who drive right by are easily caught.

The station will have cameras that capture the image of the offending truck and its license plates, making it easy for law enforcement to identify.

When the law catches up to you, you will be escorted back to the weigh station so that your truck can be weighed. They will tend to do a more thorough inspection of your truck and its cargo if you are caught skipping, as they will assume that you are trying to conceal something.

Fines are almost always handed out to those who violate this law. Additional penalties could include a suspension of your CDL.

What Else Do They Check At A Weigh Station?

Weigh stations are more than just checking out your truck's weight. There are often several other items the staff at a weigh station will check, ensuring that you and your vehicle are compliant with the law.

When approaching a weigh station in a commercial vehicle, be prepared to have your log checked and inspected, too.

Why Do They Check The Logbook At A Weigh Station?

The law has limitations on how many hours a driver can operate a commercial vehicle within a certain timeframe. Too much driving creates a risk for the operator and others on the road. Logbooks are a way to verify that the driver has been resting between driving shifts.

Be Prepared For A Physical Inspection Of The Truck

Additionally, the weigh station staff might do a physical inspection of your vehicle's mechanics. They might check the brakes, tires, and wheels to ensure that they are up to snuff. Fuel, oil, and other leaks might be checked for as well.

What If There Is An Issue That The Weigh Station Staff Discovers?

Should your vehicle be overweight, you'll need to unload part of your cargo to continue in most cases. You will also be subject to a fine. The amount of the fine will vary depending on what state you are in and how much overweight you are. It can range from a few hundred dollars to thousands of dollars.

If your vehicle doesn't pass inspection, the staff at the weigh station can force you to park the truck until the problem is remedied. 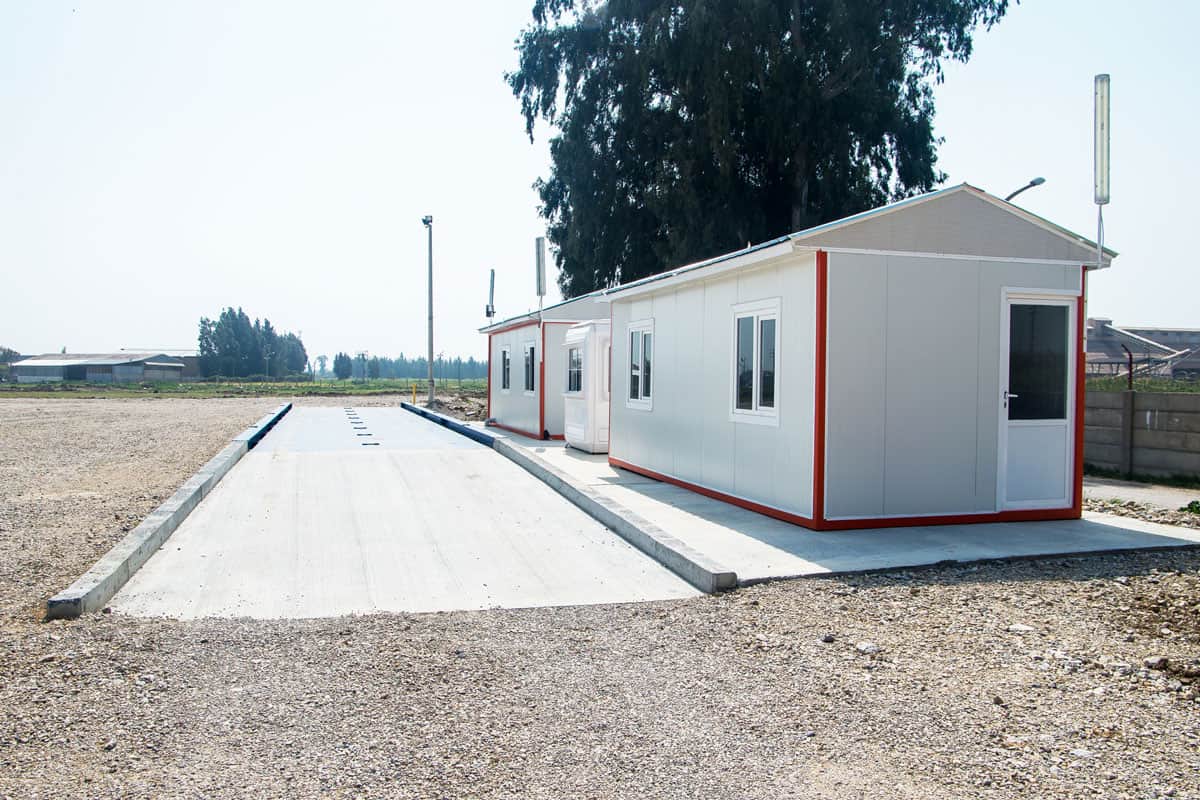 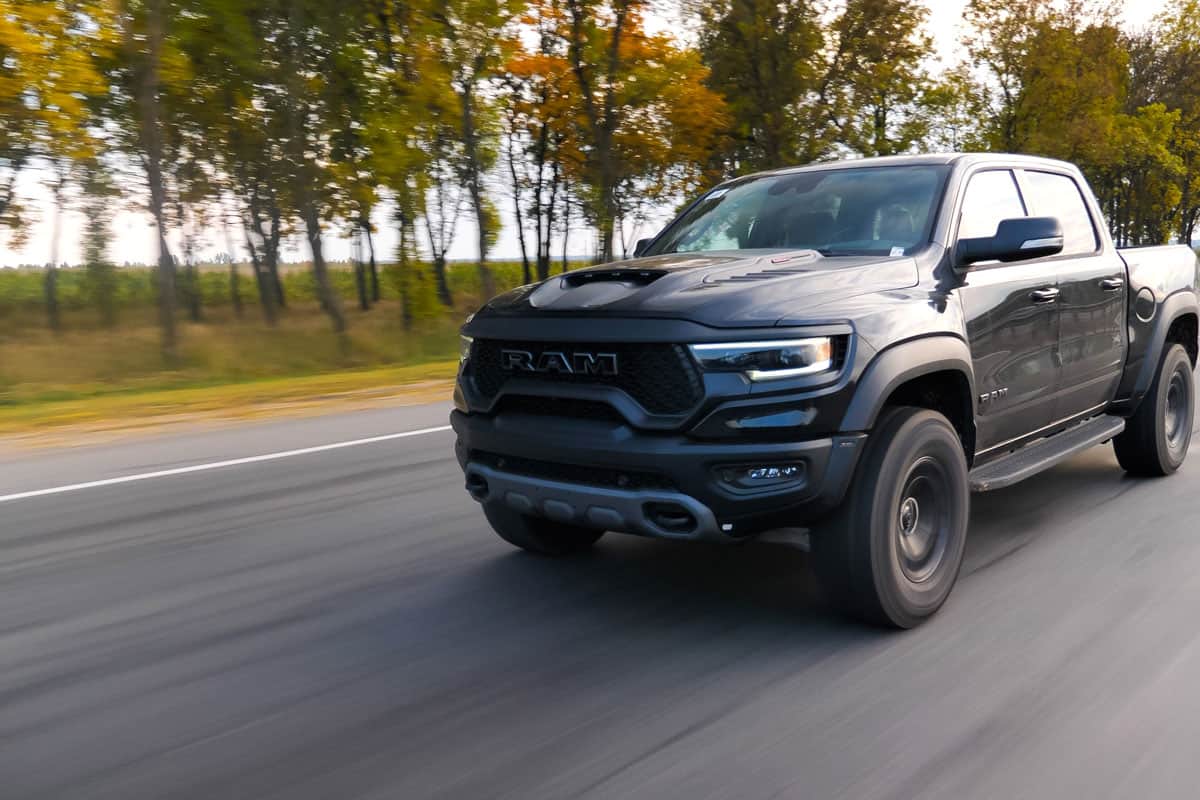 The requirement to get your vehicle weighed at a weigh station applies to more than just tractor trailers. Any pickup truck used for commercial purposes will need to get weighed if the combined gross weight is over 10,000 pounds.

Know when you need to stop at a weigh station, and never deliberately bypass one that the law requires you to stop at. Doing so subjects you to severe fines and other potential penalties. Drive safe!

We hope this post answered all of your questions. For additional information, we recommend reading the following automotive posts:

What Half-Ton Trucks Have The Highest Payload

What’s The Best SUV for Towing A Travel Trailer? [Including Six Recommendations]