Most vehicles use a piston engine. However, a few buck this trend and use a rotary engine instead. There are many questions surrounding a rotary engine, one of which is whether it has valves. We did our due research to bring you the answer to this query and more.

Rotary engines are unique; they don't have valves, a camshaft, rocker arms, timing belts, or a flywheel. Despite that, they can do the same thing as piston engines and more. As such, many car manufacturers entertain the idea of using a rotary engine for their cars in the future.

This article will teach you the parts that make up a rotary engine and how it all works. You will also understand the advantages and disadvantages of using one and why most car manufacturers prefer a piston engine over one. So, continue reading to find out more.

Do Rotary Engines Have Valves? 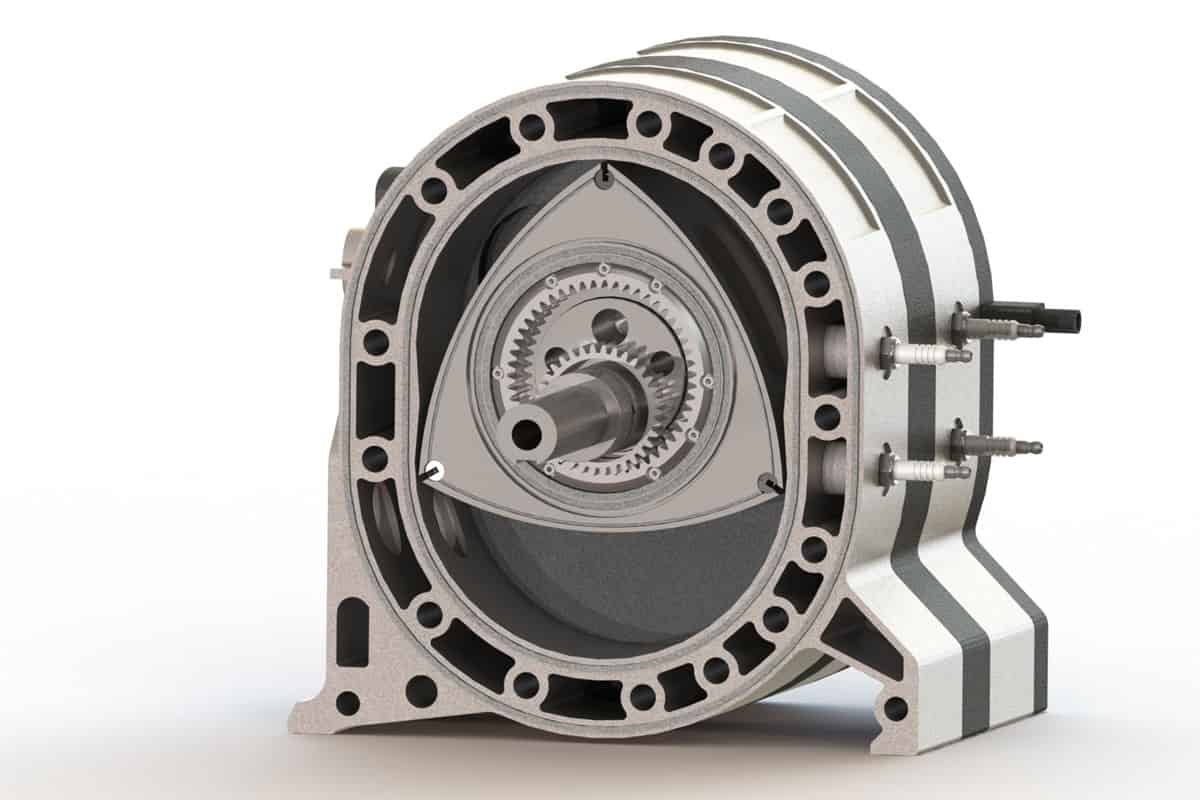 Rotary engines have no valves, so they can spin for up to 10,000 rpm or more. Unlike traditional piston engines, which require multiple moving pieces to combust the air/fuel mixture for it to work, a rotary engine can do the same just by spinning.

It's due to a rotary engine's unique design that such a thing is possible. Note that it can do so without a third of what makes up a piston engine. To summarize, a rotary engine doesn't need valves, timing gears, pistons, crankshafts, and con-rods to work.

What Are The Parts Of A Rotary Engine? 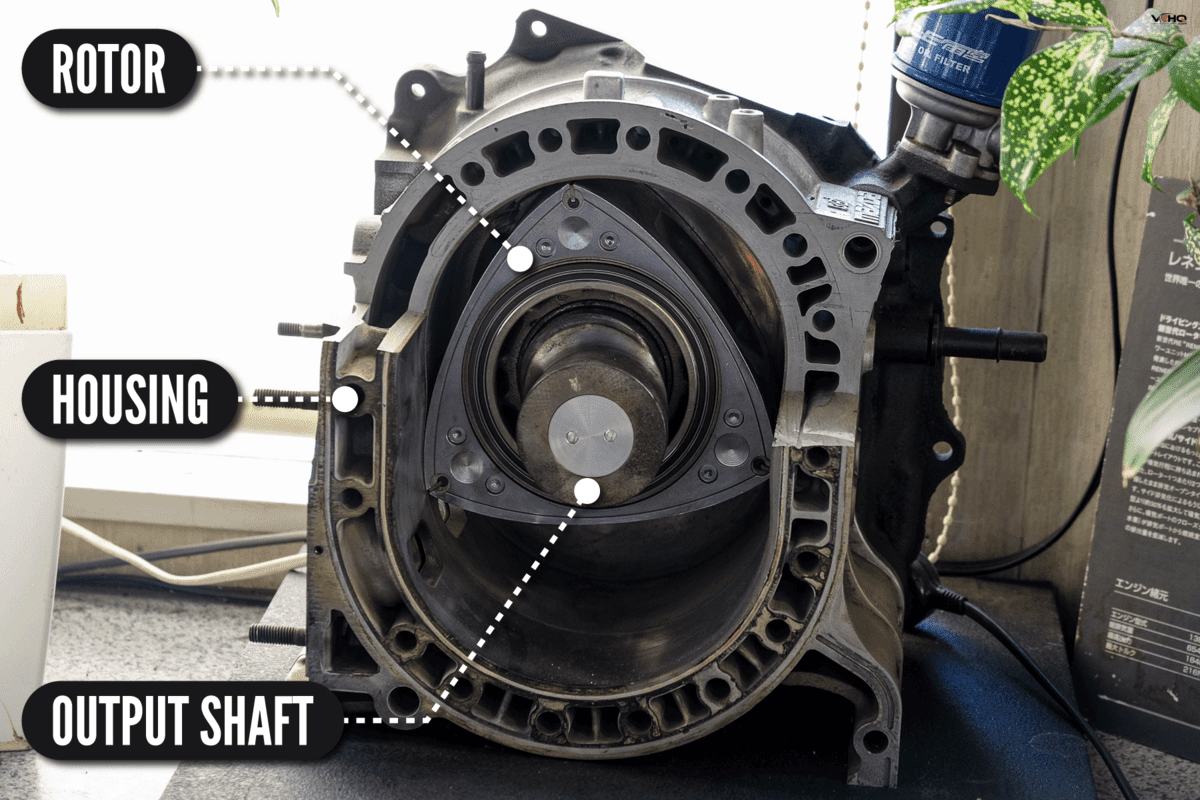 Now you know that a rotary engine doesn't have valves and many other parts that a piston engine has, what makes it up? Thankfully, you can learn all about it and more in this section:

A rotary engine comes with three main parts. And the first of these three is the rotor.

As you can already tell, this gives life to the whole engine. This is where the air/fuel mixture comes and goes. It's what makes the whole engine possible without the need for multiple moving parts.

The next part of the rotary engine is the housing. An oval-shaped design allows the rotor's ends to always stay close to the chamber's walls.

This is also where all the processes of the rotary engine happen. Namely, the intake, compression, combustion, and exhaust. Not only that, but it also houses the intake and exhaust ports of the engine.

Finally, it's time to discuss the output shaft. It's similar to the crankshaft of a piston engine. Mounted on the shaft are round lobes that fit perfectly with one part of the rotor.

As the rotor spins, it forces the output shaft to follow as well in the same direction. This then produces a torque which, converted, produces power for the rest of the car.

How Does A Rotary Engine Work? 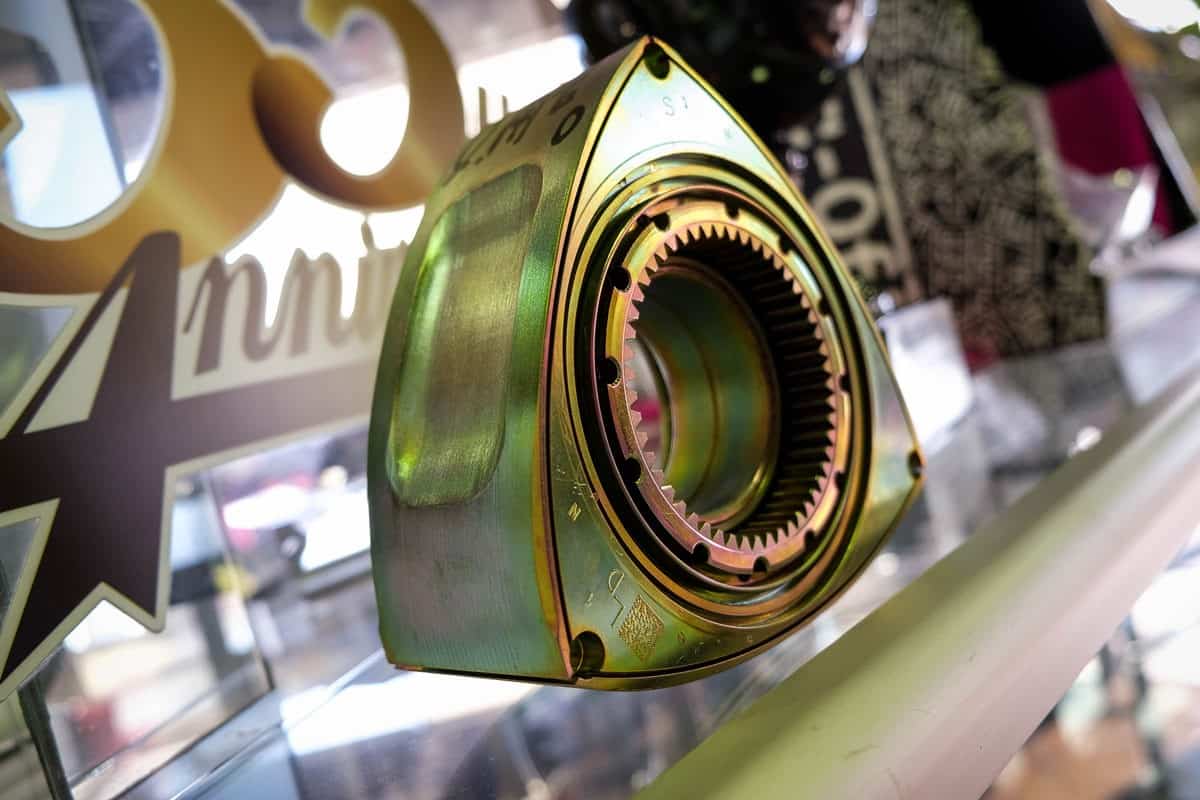 Due to how unique these engines are, not many fully understand how they work. In this section, we'll go into more detail on this process.

The first part of the process is the intake. This begins when the rotor starts moving toward the intake port.

As the rotor starts moving, the air/fuel mixture inside the chamber compresses down. This continues until the chamber is nearly empty.

From there, it starts the process of intaking air/fuel again and compressing it down. As for the compressed air/fuel, it moves on to the next step, combustion.

This is where all the magic happens. Using two spark plugs, the engine instantly combusts the compressed air/fuel mixture.

When that happens, pressure forms. This pressure then forces the rotor to move repeatedly, gaining speed as time goes on. From this continuous rotation, the engine starts producing power for the vehicle.

Finally, the leftover gasses produced by the combustion of the air/fuel mixture escape through the exhaust port once the chamber passes by. And the more the rotor continues to spin, the harder it pushes out the remaining exhaust out through the port.

From there, the cycle repeats itself in a continuous rotation. What makes this especially intriguing is just how simple it all is. Compared to a piston engine, the way a rotary engine works is a simple and easy mechanical process to understand.

What Are The Benefits Of Using A Rotary Engine? 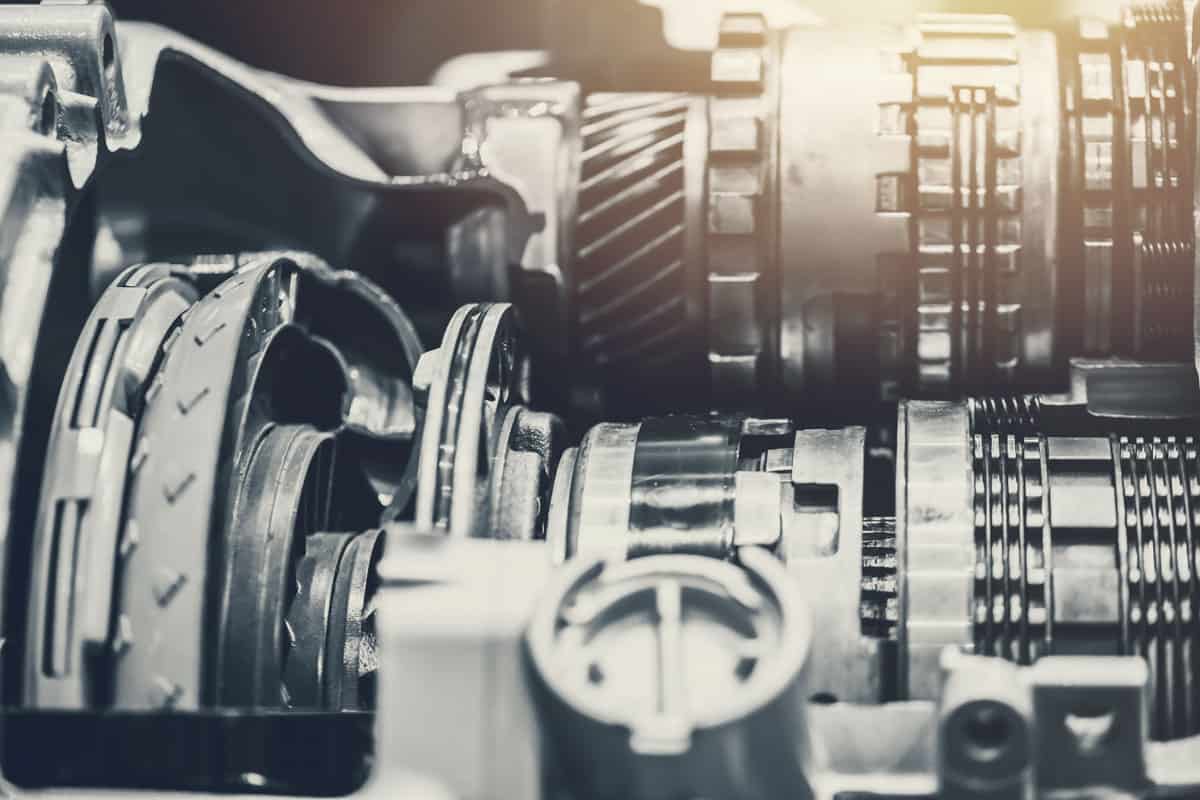 In this section, you will learn the benefits of using a rotary engine. Japanese car manufacturer Mazda is an early supporter of this engine and, to this day, still makes and improves upon this engine due to the following benefits they provide:

This results in having a smaller and more compact engine inside your car. And because of the number of parts required for it to work, rotary engines are much more reliable due to how easy it is to maintain and replace their parts.

Check this timing belt and water pump kit on Amazon.

Because of how a rotary engine works, it can deliver power with less vibration than a piston engine.

A piston engine violently thrusts and moves its parts in different directions to achieve the necessary power to make the vehicle move. As a result, it's normal for there to be vibrations inside the car.

However, since a rotary engine works by spinning in one direction, it doesn't produce any vibrations, resulting in a smoother car ride.

On top of that, the rotary engine's spinning nature can provide power at a more efficient phase than a piston engine.

Unlike a piston engine that can seize and cause massive damage, rotary engines don't have the same problem. Instead, it will continue to provide power in a limited amount until it finally stops working.

It doesn't require as many repairs as a piston engine. More often than not, you will end up replacing your car if it has a seized engine. Rotary engines are immune to that sort of high-risk trouble, making them more reliable than the two.

What Are The Challenges Of Using A Rotary Engine?

While there are plenty of reasons why a rotary engine will benefit a car, plenty suggests otherwise. It's also why only aircraft and specific project applications make use of a rotary engine:

First, one of the main knocks to using a rotary engine is its high emission rate. The fact that it burns oil and fuel makes it particularly harmful to the environment.

It's also one of the reasons why it's difficult to make a car using a rotary engine in the United States. The strict emission regulations make it impossible for current rotary engines to pass due to how must carbon emission it produces.

So if you own a car with a rotary engine, you'll find it difficult to repair and replace due to its uniqueness.

Few car companies still make rotary engines nowadays, and because of how special the part is, you'll end up shelling out a large amount of money. Because of its low demand on the market, it's a loss for most car companies.

Check this engine on Amazon.

Last but not least, a rotary engine burns more fuel than a regular piston engine. Because of its unique design, it leaves unburned fuel behind with each combustion cycle.

While it provides more power than a piston engine, it also uses more fuel. And considering how it burns oil and its poor emissions, the added fuel waste is another undesirable trait. 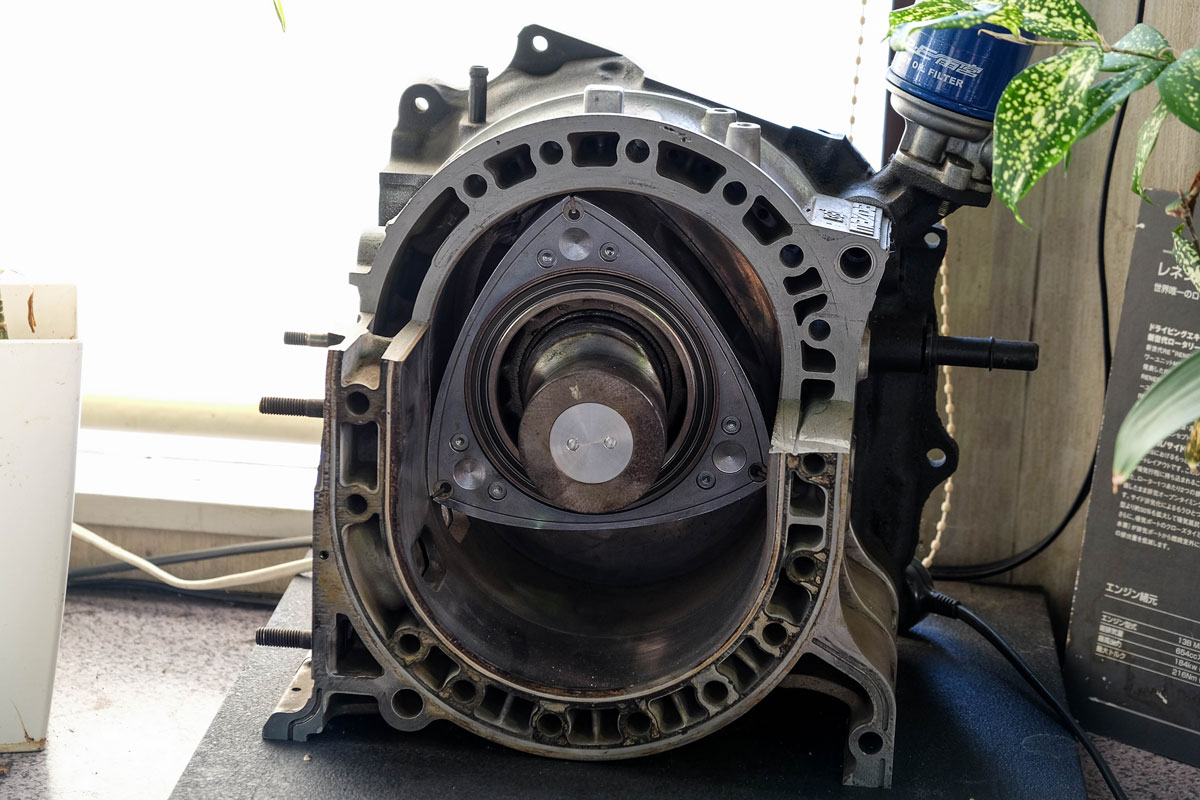 Because of its unique design, a rotary engine has fewer moving parts, like the valves, than a regular piston engine. Despite that, they still provide the same amount of power as a piston engine, sometimes more in certain situations.

Due to their short lifespan, expensive manufacturing costs, and fuel inefficiency, most cars around the world won't use them in the foreseeable future.

How To Vent Your Engine Bay [Step By Step Guide]?

Why Does My Engine Light Flash 10 Times And Then Stop?