The Tacoma has been an important part of Toyota's lineup since it first came out back in 1995. But is there a powerful, V8 option for this mid-size pickup? We've scored spec sheets to bring you the answer to the question.

There isn't a V8 engine available for the 2022 Toyota Tacoma. The Tacoma comes with either a 4-cylinder or a V6 engine standard, depending on the trim level.

In this article, we'll take a closer look at the engine options for the Tacoma as well as what Toyota vehicles do offer a V8 option. We'll even take a look at some rumors about a very special V8 engine Toyota may have in the works. Read on to learn more! 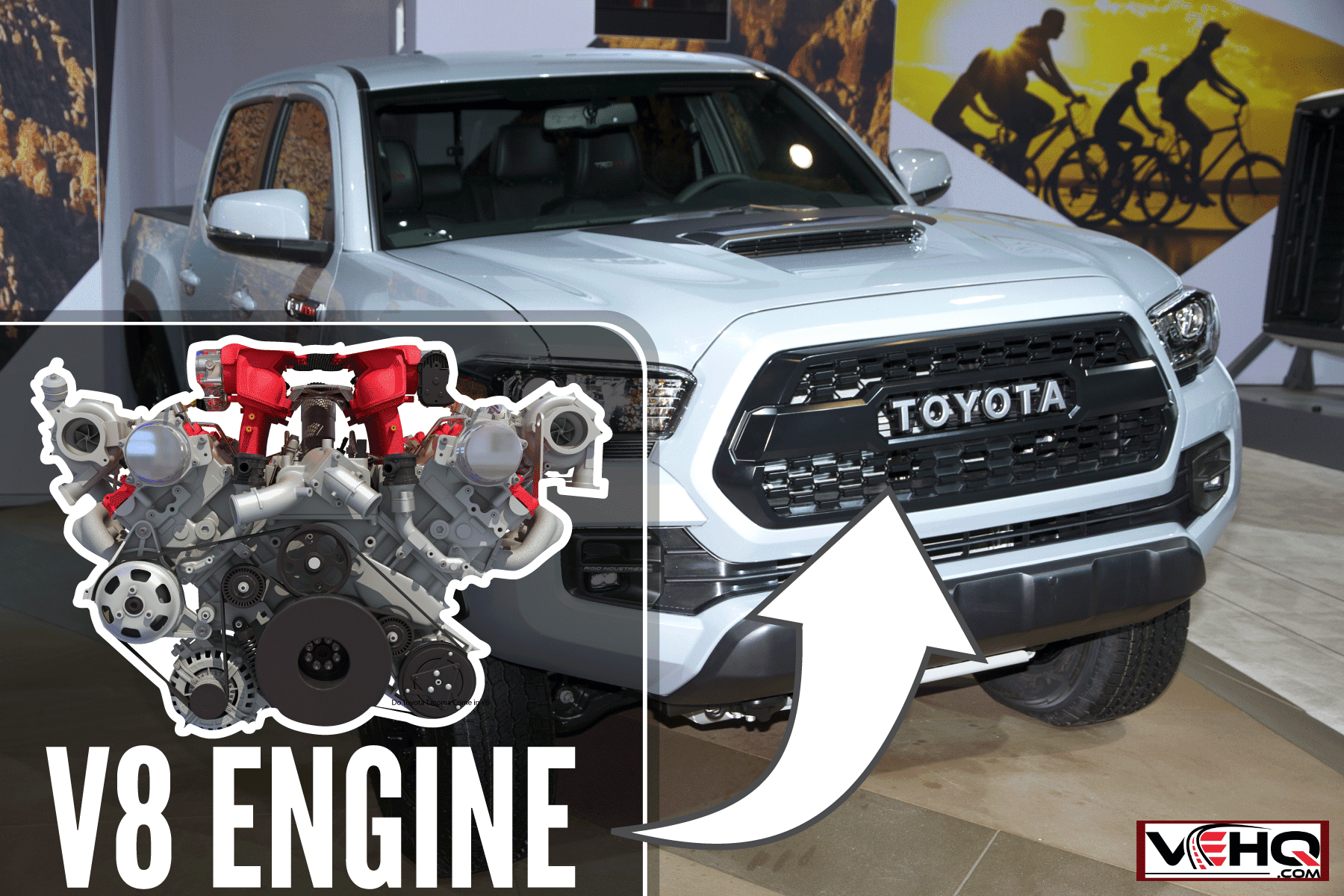 What Is The Biggest Engine In A Toyota Tacoma?

The lack of a V8 option for the Toyota Tacoma may come as a disappointment to some, but there are still some solid engine options for this model.

The Tacoma's biggest engine option is the 3.5-liter V6 engine. This V6 engine offers 278 horsepower and 265 pound-feet of torque. 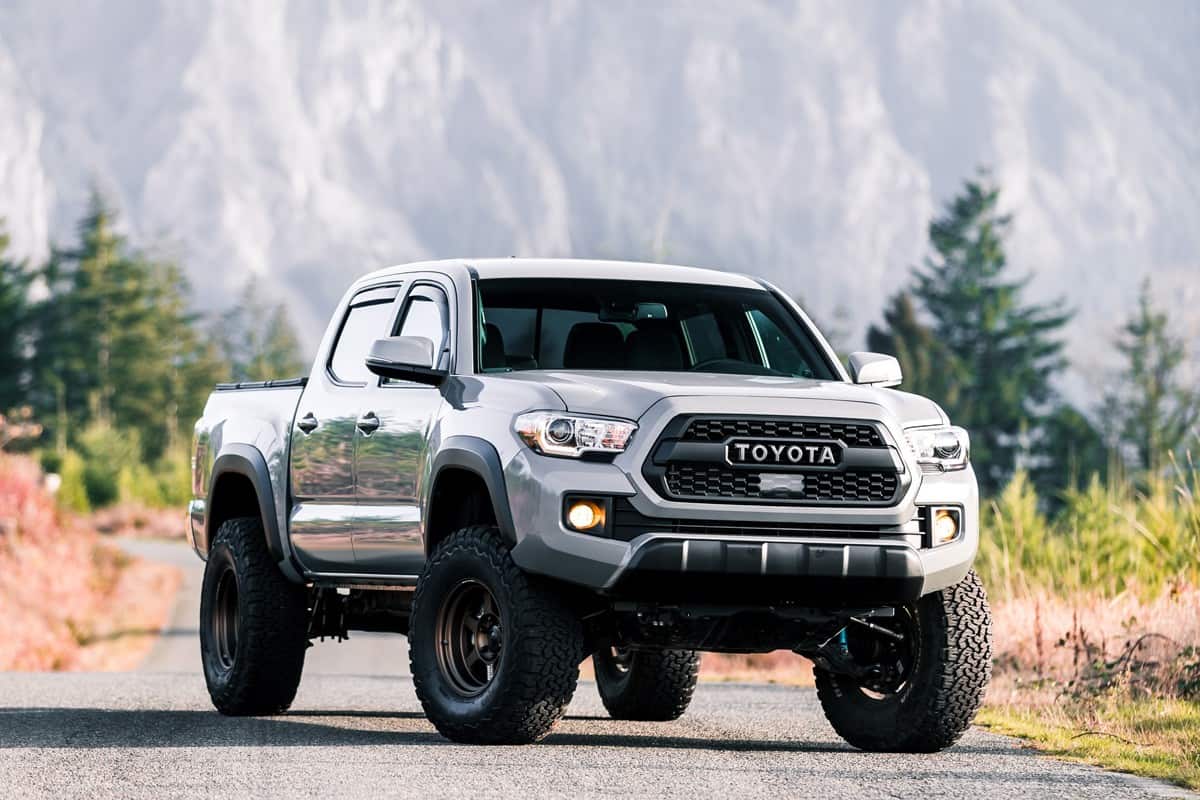 The other engine option for the Tacoma is the 2.7-liter 4-cylinder engine. This engine provides 159 horsepower and 180 pound-feet of torque.

The differences between these two engines are easy to notice when driving. You'll definitely feel more giddy-up with the V6 engine's improved horsepower. The 4-cylinder engine can feel a little sluggish in comparison.

Were There Any Years of Tacoma With A V8 Engine?

We've seen the engine options for the 2022 Toyota Tacoma, but were there any other years where a V8 engine was available?

Sadly, not for the Tacoma. The Tacoma is in its third generation, which hit the roads back in 2015. This generation, like the two before it, has offered 4-cylinder and V6 engine options so drivers can choose a Tacoma that fits their needs.

However, like the third, neither of the earlier generations offered a V8 engine option.

While this may be disappointing to some, it's not necessarily surprising. The Tacoma is variously labeled as a compact or mid-size pickup truck. V8 engines are very rare in this class, more often appearing in trucks that are 1/2 ton or larger.

Can You Put A V8 Engine In A Tacoma? 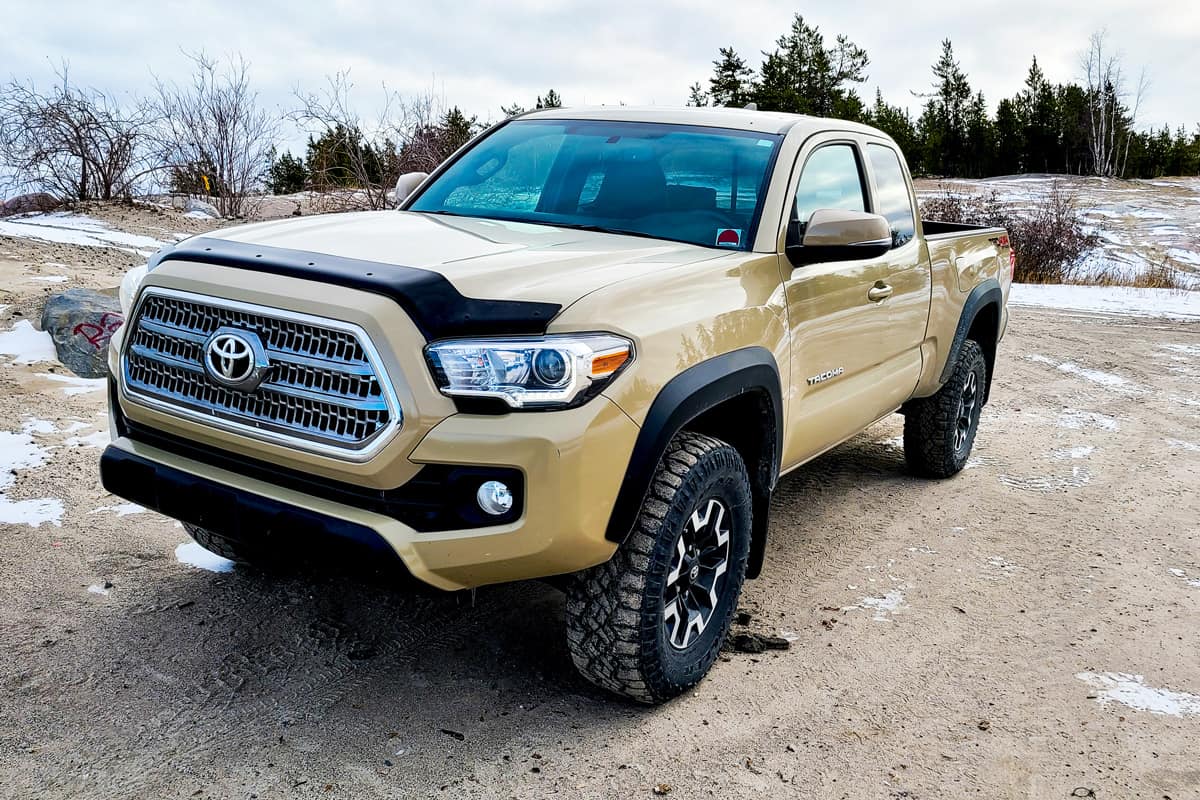 While Toyota doesn't produce a V8 engine for the Tacoma, you may still wonder if you can put one in yourself. Not only is it possible; it's been done.

The most famous example of this comes from the Deberti shop. Doug and Brad Deberti are a dynamic father-son duo whose unconventional car mods were head-turning enough to land them a show on the Discovery Channel called Twin Turbos.

One of their most eye-catching mods is a Toyota Tacoma outfitted with a V8 engine. And not just any V8 engine; a NASCAR V8 engine. The full modification is so outrageous you might not ever guess it started as a sensible, mid-size pickup.

See it for yourself in the video from AutotopiaLA below:

While this custom Tacoma is certainly a spectacle, outfitting a Tacoma with a V8 engine isn't really practical for most. The necessary time, money, and labor are enough to dissuade all but the most die-hard enthusiasts.

If your heart is set on a pickup with a V8 engine, you may want to look at full-size pickups instead. Models such as the Ford F-150, Chevy Silverado 1500, Ram 1500, and Nissan Titan have V8 options.

There is no V8 engine option for the 2022 Toyota Tundra, but V8 engines were available for some earlier model years.

What Toyota Vehicles Come With A V8 Engine? 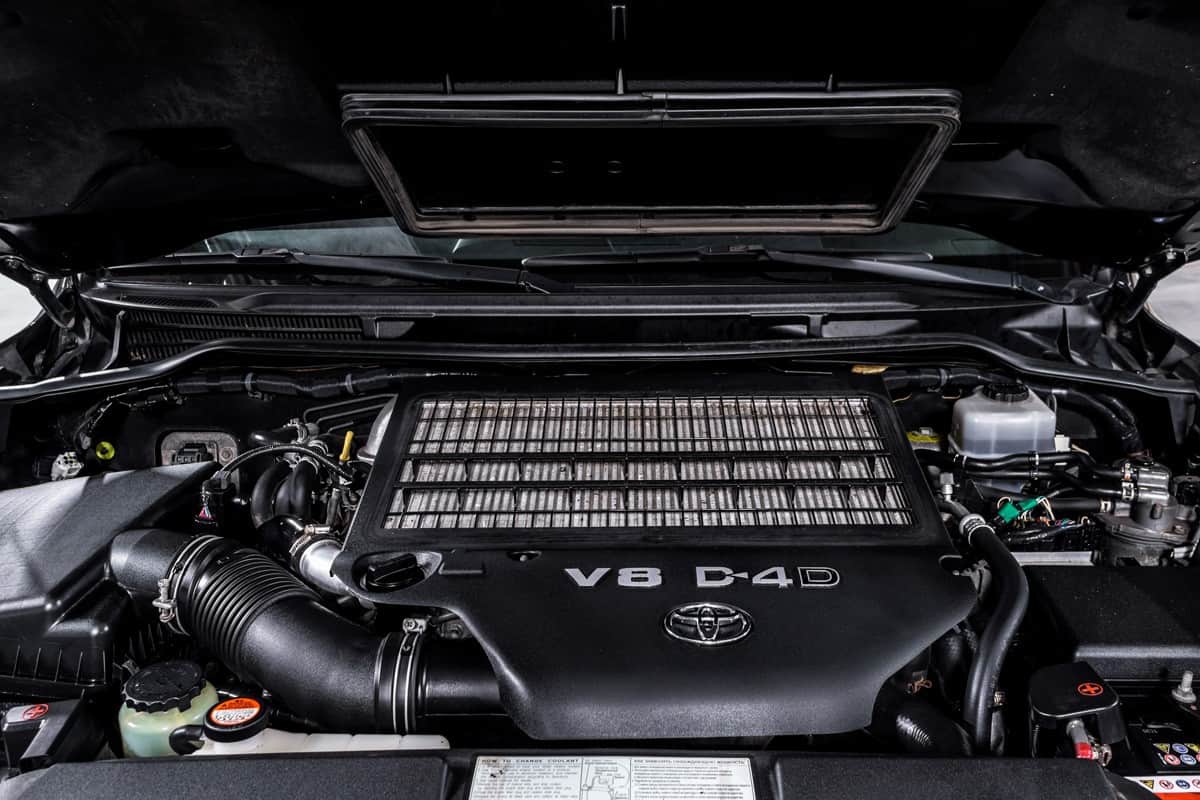 The V8 engine has almost been completely phased out from Toyota's lineup. For the 2022 model year, only the Sequoia comes with a V8 engine option, and Motorbiscuit reports that it will be dropped from the Sequoia for the 2023 lineup.

The engine they're dropping is the 5.7-liter 3UR-FE that has been available going to the 2007 model year. This engine option was also available for the Tundra, Land Cruiser, and Lexus LX 570 through to 2021.

Why is Toyota dropping its V8 engine?

While it may be sad to see the V8 engine dropping from Toyota's lineup, you'll be pleased to know that it's being replaced with something even better.

For the 2023 Sequoia, Toyota is making the 3.445-liter i-FORCE MAX Twin-Turbo V6 Hybrid engine standard. This engine isn't just a mouthful; it's also more powerful than their previous V8 engine.

The increased power isn't the only advantage either. While Toyota hasn't released official figures for the Sequoia yet, they've suggested that the new engine will also improve the Sequoia's fuel economy.

Is Toyota bringing the V8 engine back?

While Toyota's current V8 engine is on the way out, that doesn't necessarily mean we won't see one again. There have been no official announcements that Toyota plans on bringing back or making a new V8 engine, but there are some interesting rumors.

These rumors have been reported by sites such as Car Buzz and Top Gear that all trace back to a Japanese auto publication called Best Car Web.

Since then, Toyota has reaffirmed its dedication to developing hydrogen engines. The company president, Akio Toyoda, even participated in a race in June 3, 2022, in a hydrogen-powered vehicle.

Toyota and Yamaha are among several Japanese automakers who are committed to reaching carbon neutrality with internal-combustion engines. Hydrogen engines, and particularly liquid-hydrogen engines, appear to be the target they've set their sights on.

While it's still too early to say if these plans will pan out or not, you may find yourself driving a powerful Toyota with a V8 engine and no carbon emissions in the coming years.

You can see the Yamaha V8 hydrogen engine for yourself in the video below. The audio is in Japanese, but there are some (albeit limited) English subtitles.

How Much Can The Toyota Tacoma Tow? 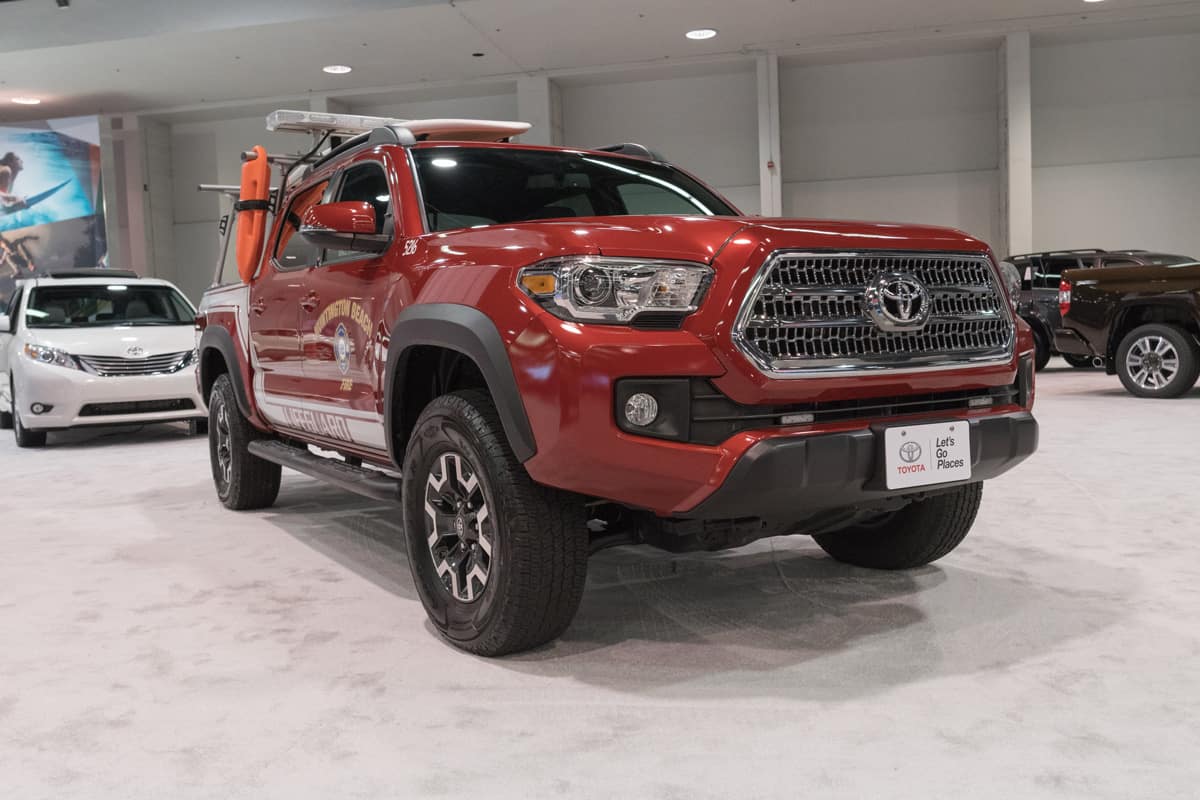 The towing capacity of your Tacoma will depend on the engine, drivetrain, trim level, and more.

If you want the most from your Tacoma, you'll want to make sure you choose one with the V6 engine. Equipped with this, your Tacoma's towing capacity will range between 6,400 and 6,800 pounds, depending on if you have the towing package.

A 4-cylinder Tacoma, on the other hand, maxes out at a towing capacity of 3,500 pounds. That's nearly half of the V6 engine!

Does the Toyota Tacoma have a towing package?

To get the highest towing capacity from your Tacoma, it's not enough to just choose the right engine. You'll also need the Tacoma towing package.

This package doesn't just come with the hookups you'll need (although it does include a Class IV hitch, trailer wiring, and 4/7 pin connector). It also includes features that help with towing performance and actually increase the capacity.

These upgrades include a heavy-duty battery and 130-amp alternator, transmission and engine coolers, and trailer sway control.

Is The Toyota Tacoma Reliable?

Toyota is one of those manufacturers that has a long-standing reputation for reliability. It's one of the first words that come to mind when the brand comes up. But does the Tacoma live up to this reputation?

It may be the case that the 2022 Tacoma is actually hurting Toyota's reputation for reliability. J. D. Power's consumer ratings give the 2022 Tacoma a quality and reliability score of 81. This does put the Tacoma in the great category, but just barely.

They also put the Tacoma at #2 in their mid-size truck list, losing only to the Ford Ranger. However, the Chevy Colorado and the Jeep Gladiator both beat the Tacoma when it came to quality and reliability scores.

Furthermore, Consumer Reports has been even less generous with the Tacoma. According to Motor Biscuit, the Tacoma's reliability score dropped from 5/5 in 2021 to 3/5 in 2022.

This, along with low ratings for other vehicles, caused Toyota to drop from second to third place in overall reliability as a brand.

The Tacoma didn't fair much better with RepairPal, which gave it a rating of 3.5 out of 5. While this isn't a bad rating per se, it did put the Tacoma last of 7 in their list of mid-size pickups.

U.S. News was also unimpressed with the Tacoma, putting it #5 in their list of compact pickup trucks for 2022. They put it lower due to its "underwhelming engines and firm ride." They did praise it for its standard features and infotainment system, staying relatively mute on the question of reliability.

While you can find some jaw-dropping modded Tacomas with V8 engines, Toyota doesn't produce any themselves.

For now, Toyota is moving away from V8 engines for its entire lineup. However, if plans and rumors pan out, we may someday see Toyota's hitting the road with V8 hydrogen engines that are both powerful and carbon neutral.

Until that time, there are some great V6 options for the Tacoma and twin-turbo V6 engines for some of Toyota's larger vehicles.

If you found this article interesting, be sure to check out these great posts:

Toyota Tacoma SR Vs SR5 - Which Is Right For You?

What Does A V8 Engine Mean For Pickup/ SUV Owners?