The Buick Encore is small but sporty and has consumers wondering more about its performance. It may have a small engine, but it still packs a zippy punch. However, does that mean that the Buick Encore has a turbo giving it its power? Below we have answered the engine specs of the 2022 Buick Encore.

Yes, the Buick Encore is equipped with a turbo. The engine under the hood is a 1.4-liter turbocharged engine with 155 hp at 5600 RPM. This is a decent amount of power with the help of the turbo, but it isn't your go-to vehicle for heavy-duty jobs. Additionally, The Encore GX is powered by two turbocharged three-cylinder engines.

If you want a small SUV that is convenient for city commutes, then the Buick Encore might be worth adding to your test-drive list. In this article, we will discuss the turbocharged engine of the Buick Encore in further detail. In addition, we will talk about the different engine options and trim packages. 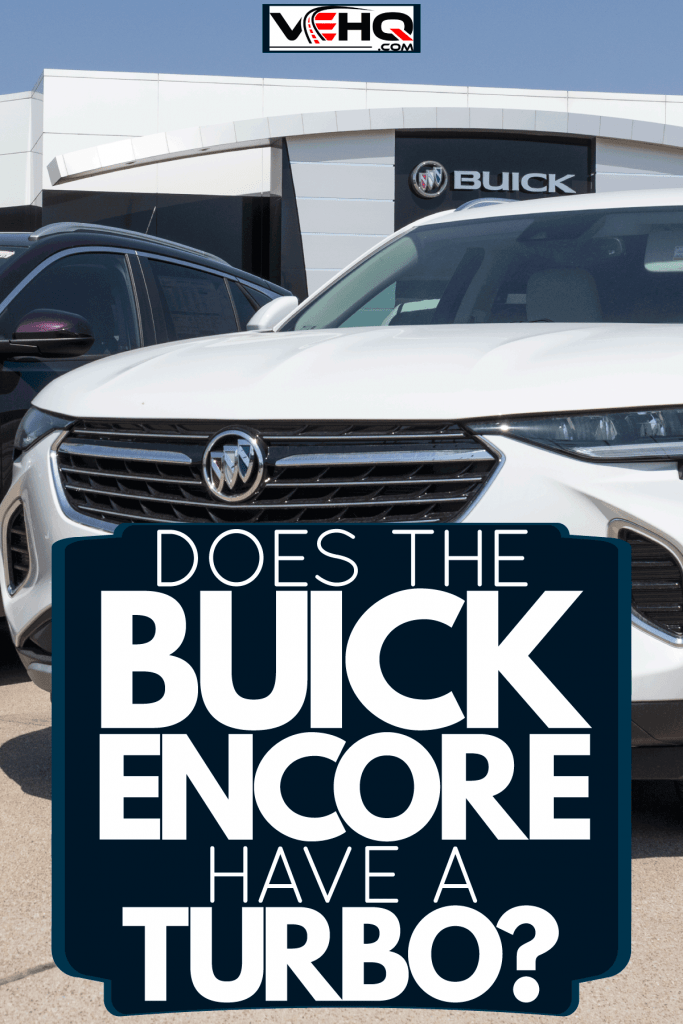 Does The Buick Encore Have A Turbo?

The Buick Encore is equipped with a turbo. This engine under the hood has 155 horsepower at 5600 RPM and comes from 1.4-liter turbocharged engines designed for decent power while being fuel-efficient as well! In addition, the Encore GX offers even more options when it comes to different kinds of motors — two turbos in three-cylinder engines provide you an amazing amount of strength without compromising on its two main points: efficiency and performance.

The Buick Encore is the first vehicle to have a forced-induction engine from General Motors. However, in this case, it has a turbocharger just like many other vehicles in its class.

The Encore is a great vehicle for first-time drivers. Unfortunately, this SUV's weak engine provides enough room to make it perfect around town but struggles at high speeds and produces too much noise when you push hard on its pedals.

The engine also comes standardly with a cylinder on-demand system. The Buick Encore may be small, but it has held its own thanks to these specifications.

The Buick Encore comes in three different trims: the base, premium, and all-wheel drive. All of these trims are four-cylinder engines equipped with turbochargers.

In addition to the standard features, this trim level is equipped with 17-inch alloy wheels, keyless entry, and power windows and door locks. But if you're feeling a little bit more luxurious, then the premium trim level will be more up your alley.

The Buick Encore in premium form is equipped with 18-inch alloy wheels and provides a power driver seat and dual-zone automatic climate control to keep you cool during hot summer days or warm during cold winter months. 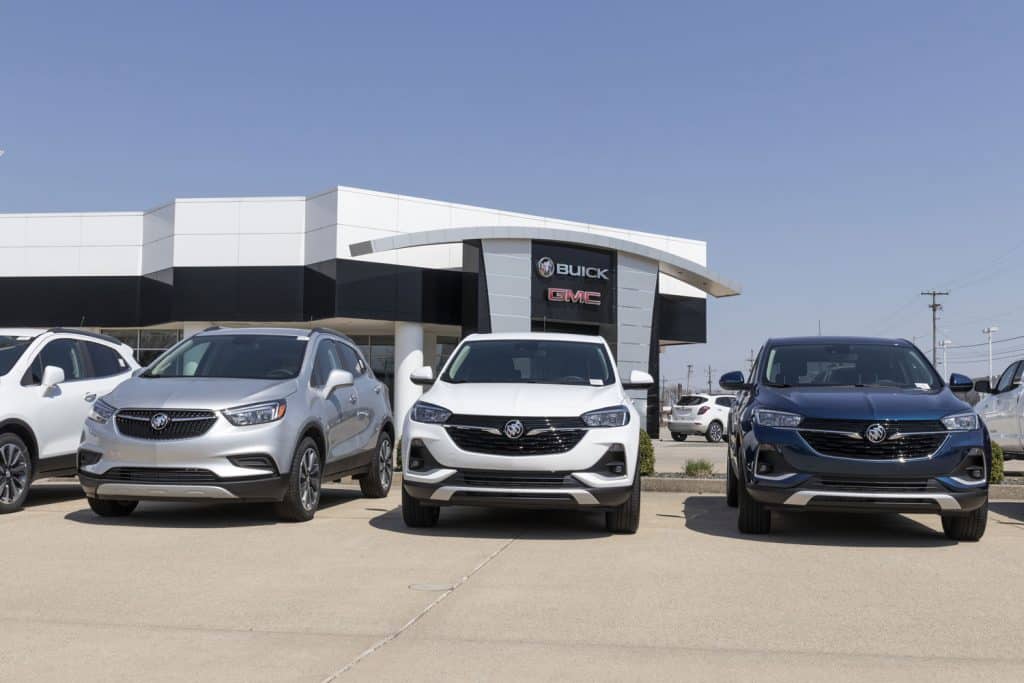 Is the Buick Encore GX turbocharged?

Two turbocharged three-cylinder engines power the Encore GX. The base version has a 1.2 liter that develops 137 horsepower, followed by an optional 1.3-liter engine that makes 155 ponies. It comes with either front or all-wheel drive options depending on the model selected for purchase. Both versions are available as part of a CVT transmission system that uses less gas than traditional automatic transmissions due to its ability to upshift.

At any given time without input from the driver to maximize fuel efficiency while also maximizing performance when needed most — this capability allows drivers who enjoy driving their vehicles more often rather than letting computers do it for them to stay engaged behind a steering wheel even though they're not required too!

The GX is the most luxurious trim level, with a dual-pane sunroof, LED headlamps, and fog lamps, as well as 18-inch wheels, to give it an aggressive look. However, all Encore GX models have a slightly more aggressive look thanks to their blacked-out front end.

What engines are available in the Buick Encore?

Yes, the Buick Encore is equipped with a turbo. The engine under the hood is a 1.4-liter Turbocharged Engine that provides 155 horsepower at 5600 RPM — giving you plenty of power to get where you need to go but not enough for heavier duty jobs like construction or hauling large items around town! The GX version has two powerful three-cylinder engines: an optional 1.2 liter (137 hp) and base model 1.3 liters (155 hp).

The Encore engine generates a decent amount of power, but it is not enough to call it a muscle car. Instead, it is more like a small cruiser that can accelerate out of its own way.

Although acceleration is slow, the Encore's 1.4-liter turbocharged engine can achieve 0 to 60 in approximately eight seconds; that is enough speed to get you from point A to B. Careful, you might pop a wheelie!

While its horsepower isn't out of this world, it does have a decent amount of torque.

Does Buick Encore have engine problems?

While there haven't been many reports on the newer models of the Buick Encore engine problems, older years have given consumers problems.

The 2017 Buick Encore has an impressive engine, but unfortunately, there are some significant issues. The most reported problem is that the engines can fail without any warning whatsoever, and even worse, sometimes they catch on fire! So if you're looking for a car with tough-as-nails reliability, this might not be your best option.

Other engine problems include:

Is the Buick Encore being discontinued?

GM is planning on retiring the Buick Encore in 2023, but before that happens, it will be marketed as a popular model for those looking to get some extra miles out of their vehicle. This car was first introduced into North America back in 2013, so by the time its retirement date comes up, it will have been over ten years old!

It's worth noting that this only applies to the North American-market Buick Encore. In Mexico, for example, the slightly larger and more premium Buick Encore GX is marketed simply as "Buick" and was introduced in 2021, so it will stick around well past 2023. Similarly, the Chinese market recently got a redesign on an up-to-date platform which means their version of compact SUV remains relevant into 2024!

By 2023, the Buick Encore will have been in production for over ten years. Yet, despite being a top-rated SUV in North America and China, sales fell from 503,865 globally in 2014 to just 85,958 two years later; the target market had already begun turning to larger SUVs like the Hyundai Kona or compact crossovers like the Honda CR-V.

With the Buick Encore unlikely to see huge sales again when reintroduced, withdrawing from markets where the model is relatively new makes sense for GM.

For example, in Mexico, Brazil, and Argentina, residents are far more interested in large vehicles; by withdrawing from these markets while remaining in China and North America, the company can focus on its core customers and ensure they have a reliable source of demand for their SUV.

Is the Buick Encore A Good Car?

Yes, the Buick Encore is a good subcompact SUV. Its small dimensions and turning radius make it easy to maneuver into tight spaces, and its refined cabin offers plenty of room for passengers in both rows. This crossover SUV also comes with lots of user-friendly infotainment technology and a decent amount of cargo space — which is surprising considering how quickly this car accelerates!

It has one drawback: high starting costs can deter some buyers who might be looking for more affordable alternatives, but if you're willing to pay extra upfront, then the tradeoffs are worth it.

No matter what, it is important always to test drive a vehicle before making a buying experience. Just because your friend said they love doesn't mean you will too. Writing down a pros and cons list is always essential when car shopping!

Buick is all about making safe cars, and with the safety features, they provide their drivers can rest assured. For example, Buicks have 4-wheel anti-lock disc brakes to ensure that if you need your car's emergency braking system on a rainy day, it will stop without any trouble at all!

The Encore also has stability/traction control systems, ten airbags as well a rearview camera which makes parking an absolute breeze; there are too many other amazing technology options for me to list them here, but I wholeheartedly recommend checking out what else this wonderful team offers because you won't be disappointed.

The Buick Encore is a peppy SUV but may not be for everyone. It is important that before making any purchase decision on your next vehicle that you take time and research what type of maintenance costs will go into owning your new car or SUV. Don't just rely on word-of-mouth from friends and family members about cars they've owned — if possible, test drive at least two different models so you can find one with the features that work best for you!

If you enjoyed this article on the Buick Encore, then you should also check out:

Can You Flat Tow A Buick Encore?

Does The Buick Encore Have Apple Carplay?

Does The Buick Encore Have 3rd Row Seating?

Have you driven a Buick Encore with a turbo? Let us know what you thought of its power below!