Most minivan models come with ample interior space for passengers and cargo. In addition to this, they offer versatile interior seating configurations, including Stow 'n Go seating, which allows drivers to quickly and easily fold seats into the cabin floor to allow more room for hauling bulky cargo. With the Chrysler Voyager being a minivan, you may be wondering whether it’s also equipped with Stow 'n Go seats. For your convenience, we brought you the answer.

In short, yes, the Chrysler Voyager is equipped with Stow 'n Go seating. This seating configuration allows second-row seats to be completely folded onto the cabin floor to make cargo space.

The Voyager comes with standard third-row Stow 'n Go seating, available second-row storage bins, and no stow-away seats in the mid-row. If you still have some additional questions about the Voyager's Stow 'n Go seating, don't worry. In this guide, we'll explore the topic in greater detail. Without further ado, let's get into it! 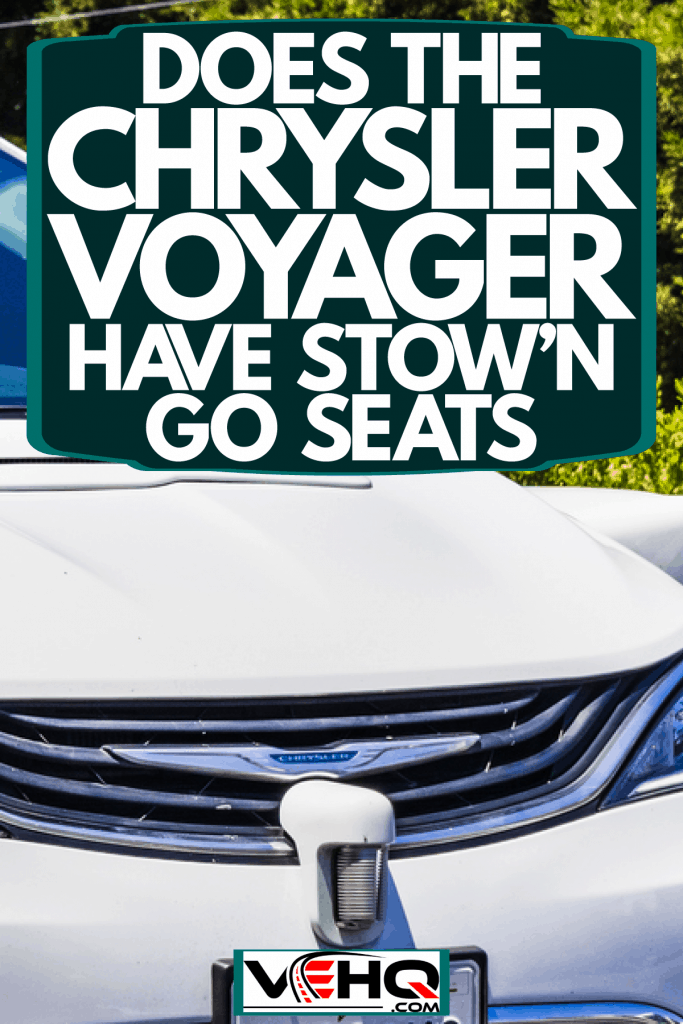 The term Stow 'n Go is the name given for a folding seat system that lets drivers fold the entire second and third rows of their minivans into the floor to allow for more space for bulky items. You can either fold one row or both rows into the cabin floor.

The seating system is highly sought after for minivan consumers, as it lets you use the entire cargo area for virtually anything, including transporting your pets, furniture, or other cargo. As an added advantage, the Voyager’s Stow 'n Go seating lets drivers utilize large storage compartments beneath when the seating is upright.

Being able to fold the entire second or third rows of your minivan into the floor is so much easier than removing the seats manually and putting them in your house. To use the Stow 'n Go seats in the Chrysler Voyager, all you have to do is give a moderate tug on the pull handle on the rear of the seat. The seat will come loose from the rear latches and fold forward onto the floor, creating additional cargo room.

If you’re planning on hauling large, bulky items in your minivan, then Stow 'n Go seats are absolutely a must. The Stow 'n Go can also be handy if you plan on camping in the minivan. When the seats are stowed, the Chrysler Voyager offers roughly enough space for an air mattress while still being able to carry some of your gear inside. Keep reading as we discuss the Chrysler Voyager's cargo space! 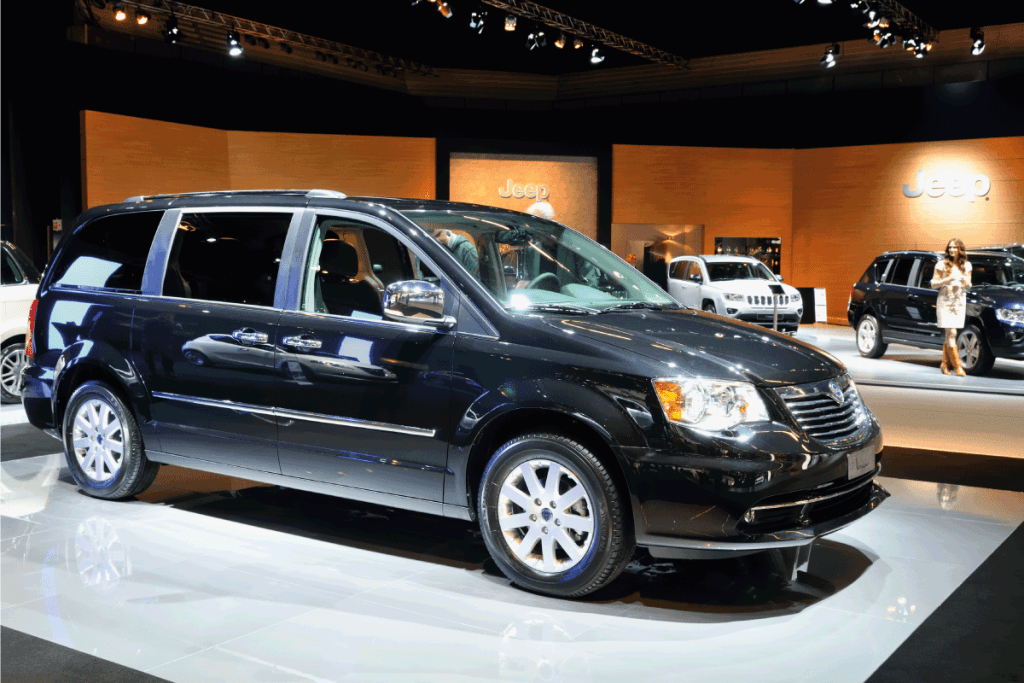 Since the Chrysler Voyager’s Stow 'n Go seats remain inside the minivan, you will not have difficulty keeping your seats when they are not in use. With foldable seats, you can also easily increase the legroom for third-row passengers. In addition to the Stow 'n Go seats, the Voyager provides up to 32.3 cubic feet of space behind its third row of seats. The third row also slides flat and opens up to 87.5 cubic feet of space.

The Voyager also offers up to 140.5 cubic feet of total interior cargo space when the second and third rows of seats are folded down. There’s also a standard floor console, trays, cubbies, a locking glove box, and slide-out bins for keeping small items such as tablets, mobile phones, and other gadgets.

Yes, the LXI fleet trims of the Voyager are equipped with Stow 'n Go second-row seating, whereas is third-row stow-n-go is standard on all models. The Voyager’s standard third-row Stow 'n Go configuration has two bench seats in the second row and available two second-row bucket seats. Thus, there’s plenty of space for adults to stretch out in the first row, but the second and third rows aren't as spacious as the Pacifica.

You can stow the second row's seat, folding it into a space on the floor behind the first row of seats. Although you’ll find plenty of room for storing groceries or bags, don’t over-stuff them, as that may impact your ability to close the hatch.

Another great feature is that you can also fold down one of the second-row seats if you’re carrying a smaller load, which will provide a lot more room for storing items.

Beneath that are storage bins with lids and magazine rack, along with cup holders. There’s also an available illuminated console bin in between the front seats.

How do you fold the seats in a Chrysler Voyager?

To fold the seats in a Chrysler Voyager, first, move the front seat forward. While the second-row armrests are folded up, open the floor panel and lean it against the front seat.

Now, grab the Stow 'n Go strap on the bottom of the second-row seat and then fold it forward. Then, carefully guide the seat down into the storage bin and tuck the strap. Finally, push the floor panel back down and readjust the front seat when necessary.

When using the second row, pull up the handle at the lower side of each Stow 'n Go seat and then push or lift it forward.

Do all Chrysler minivans have stow 'n go seating?

Stow 'n Go seats are ideal for a car owner or driver who often moves a lot of luggage and cargo. When you need to transport your pet or cargo, all you have to do is fold the seats in just a few seconds, and you are ready to hit the road!

How many passengers can fit in a Chrysler Voyager?

The Chrysler Voyager is a three-row minivan that seats seat up to 7 occupants. Thanks to the ample legroom and head in every row, there’s plenty of space in the cabin to keep everyone comfortable, regardless of which seat they occupy.

Does Chrysler Voyager have leather seats?

No, the L and LX models come standard with cloth upholstery. However, the Voyager offers a level of quality that is on par with its rivals like the Honda Odyssey, Toyota Sienna, and Chrysler Pacifica. Black plastics and alloy trim dominate the cabin in both trims.

The LXI adds leather-trimmed seats with an available heated steering wheel, rear air vents, and a 6.1” touchscreen interface to the mix. Heated front and second-row seats are optional in the LX but standard on the LXI.

The Chrysler Voyager is one of the most reliable minivan models. On top of being one of the most budget-friendly minivan models, it boasts a blissful ride, thanks to its powerful engine, intuitive infotainment system. As a result, the minivan is comfortable and practical for families and makes driving a joy. Competing minivans like the Dodge Grand Caravan can only manage to make seats fold into the floor, but they don’t offer nearly as much overall cargo and passenger space.

If you liked this article, you might also enjoy:

Can A Minivan Pull A Pop-Up Camper?

Does A King Size Bed Fit In A Cargo Van Or Minivan?

Minivan Seating And Seats: What Are The Typical Configurations?

Do you have a Chrysler Voyager? Let us know what you think about it below!