If you’re curious about the new Ford Bronco, there’s probably one key feature that you’re wondering about. The old Broncos had a removable roof and doors. They were removed due to safety changes before the line was discontinued. So on the new 2021 Ford Bronco, does the roof come off? We’ve taken a closer look at all the models to get the answer.

The new line of Ford Broncos, starting in 2021, features a removable roof. The roof is available as a soft-top or hardtop, depending on the trim. Remove the soft top by following these steps:

The hardtop has three or four panels depending on style. These can be removed by these steps:

Keep reading to learn more – we’ll go over each step and the necessary tools in greater detail. Further, this article will detail what kind of roof comes with each trim option. Then, we’ll also explain how the doors can be removed as well. Finally, what’s the difference between Bronco and Bronco Sport? We’ll explain that too. 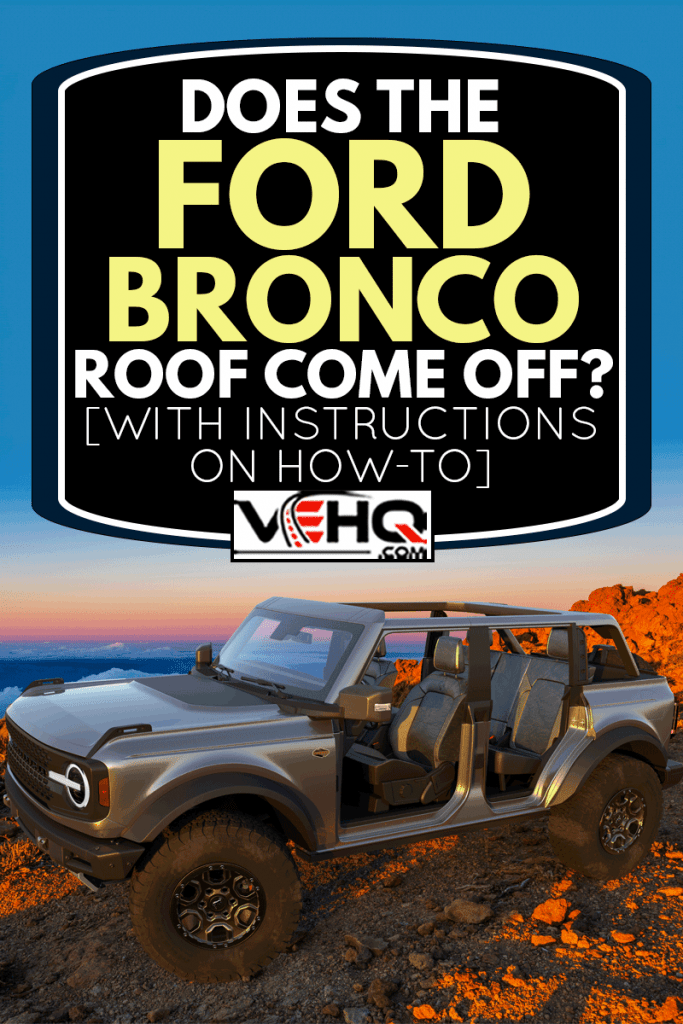 How Does The Ford Bronco Roof Work?

Removing the roof is fairly easy. Ford provides a tool kit with everything necessary and storage bags to help keep things secure. The steps vary, of course, depending on the roof style.

If you want to remove the assembly and roof entirely, you can do that by following these steps:

Removing the hardtop is easy, though it takes some tools. You will need:

These tools should all be supplied in a tool kit that came with the Bronco, courtesy of Ford.

If there’s a roof rack, removing that comes first.

Store these two panels together in the correct storage bag, with the divider between them. Place in the back of the Bronco, standing upright, in the cargo area. Secure the bag strap around the rear headrest to keep it in place, then secure the bottom of the bag to the D-rings in the cargo area.

Putting The Hard Top Roof Back 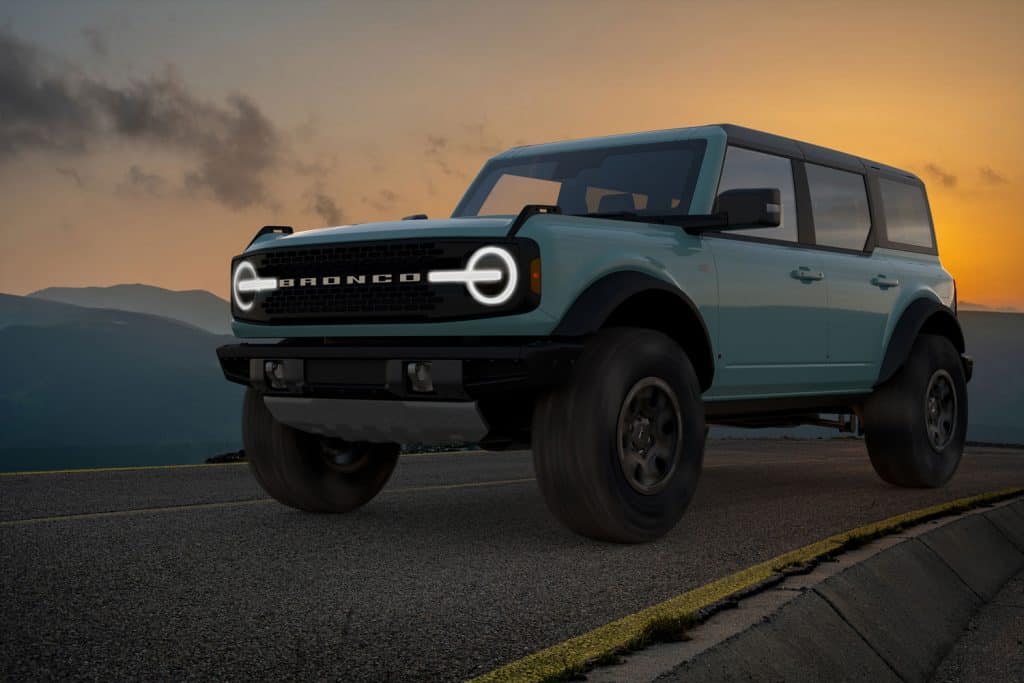 Once you manage to get the roof off, putting it back isn’t all that hard. As common sense might dictate, it’s really mostly just reversing the order of steps.

Need to see it for yourself? Check out this helpful video from Ford:

Do All Broncos Have A Removable Roof?

Way back when the old Broncos were out, they were known for their removable roofs. This started in the second generation of Broncos with a removable hardtop.

But by the ’90s, safety regulations had changed. Bronco could no longer offer the removable roof that was one of its defining features. It was too late to redesign it, so they simply secured the roof with tamper-proof bolts.
Bronco was axed by Ford in 1996. Car buyers weren’t as interested in two-door options, and Ford instead moved onto the Expedition.
Now, the new line of Broncos is finally back in 2021. The two-door model comes with a three-piece removable hardtop, while the four-door comes with a soft-top. Some of the trim options give the four-door model a four-piece removable hardtop, and it can also be purchased as an upgrade.

Does The Top Come Off The Bronco Big Bend? 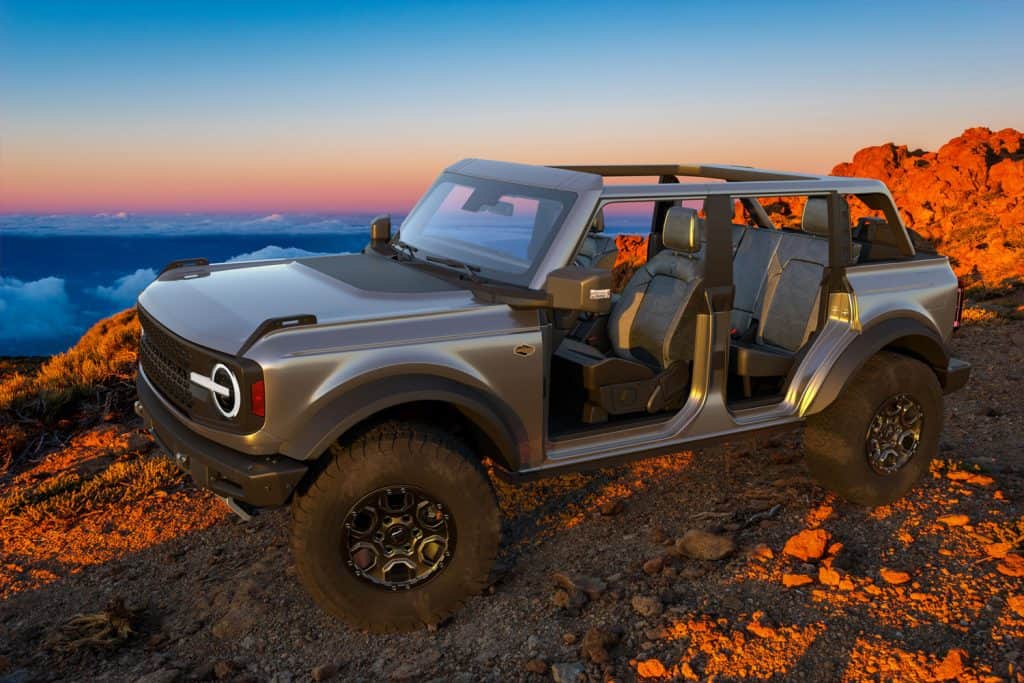 The Bronco Big Bend, like all Broncos, comes with a removable top. The trim options with the standard two-door hardtop and four-door soft-top include:

There are only two exceptions that come with a standard hardtop, whether two or four doors. These are:

Can You Take The Doors Off A Ford Bronco (And How To)?

All Ford Broncos come with removable doors – it’s one of their key features! The new Broncos are designed for the doors to fit perfectly in the back for added convenience.

The Bronco even comes with special bags to put each door inside, which protect the door. The bags have labels indicating which door goes in each bag. It also shows you the correct order to store the bags.

Confused? Check out this video:

Does The Ford Bronco Have A Sunroof?

With a removable roof, the Ford Bronco doesn’t have what can technically be called a sunroof. The Bronco Sport, however, comes with an available safari-style sunroof.

Besides the common name, the Ford Bronco and the Ford Bronco Sport are still two completely different models. A few design points are the same, but otherwise, they’re barely related. 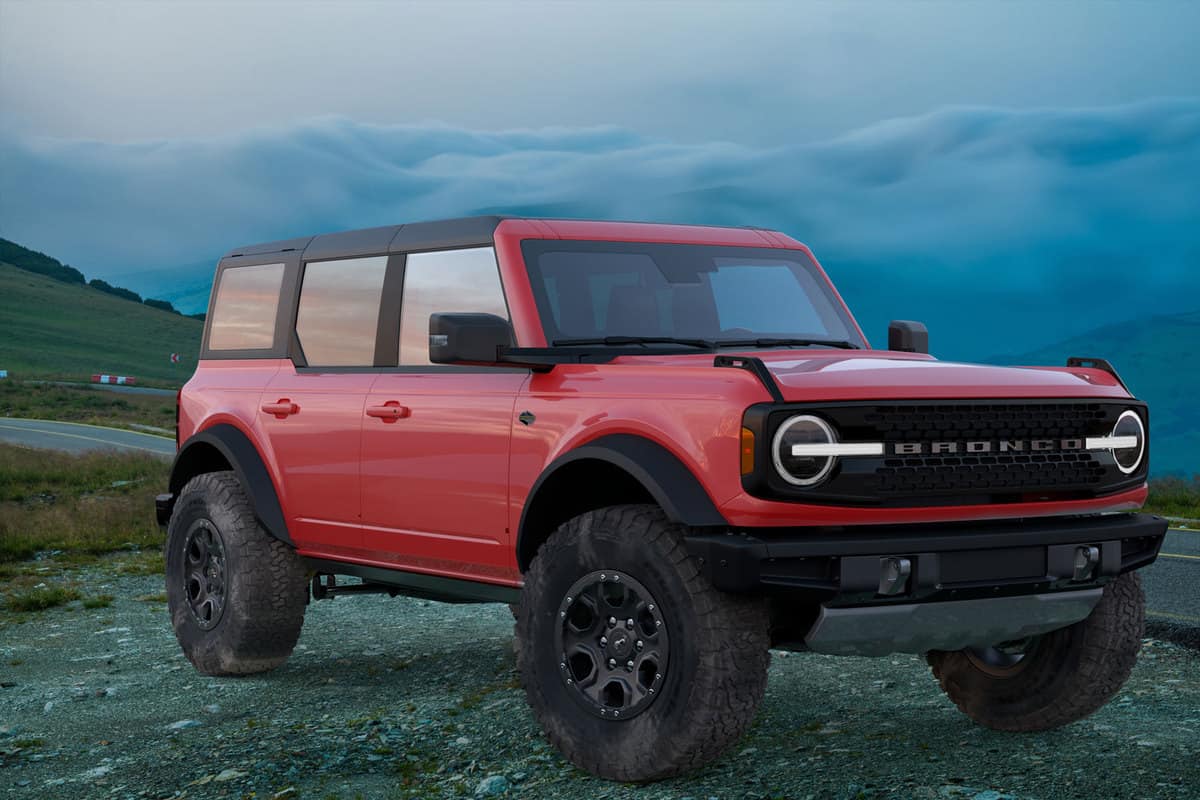 The Ford Bronco still comes with a removable roof and doors. The four-door Bronco comes with a standard soft top, while the two-door offers a hardtop. You can also upgrade the roof for a fee. Ford provides the necessary tools and even storage bags to make the process simpler. The Ford Bronco Sport does not have these removable parts and is really nothing like the Ford Bronco, though it does offer a safari-style sunroof.

For further reading, try these:

21 Types Of Ford Cars [And That’s Without Trucks!]

Is The Acura NSX AWD?

What Pickup Trucks Have Air Suspension?

Will A Full Mattress Fit In An SUV? [Including Queen Or King Size Mattresses] 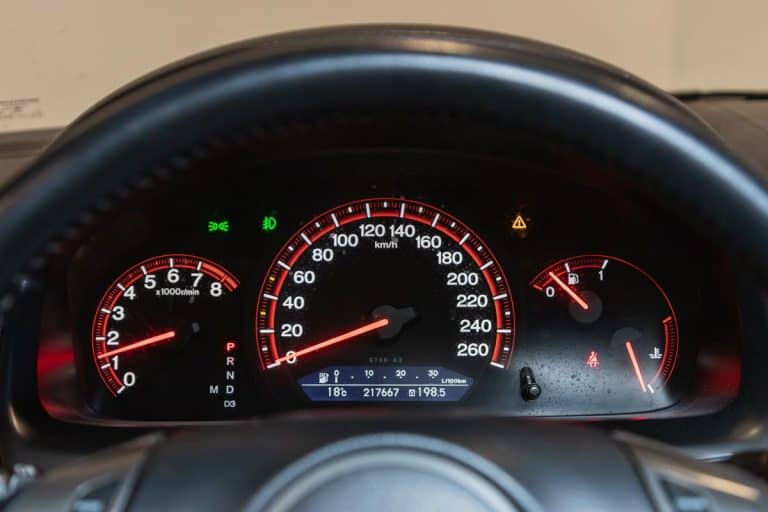 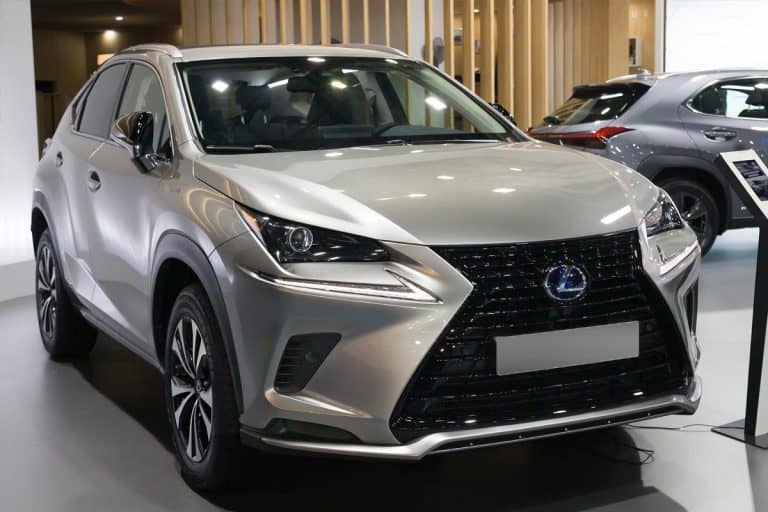 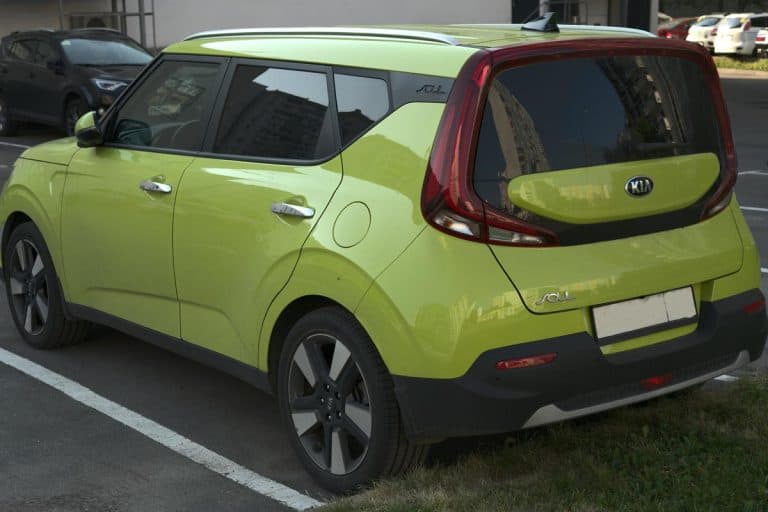 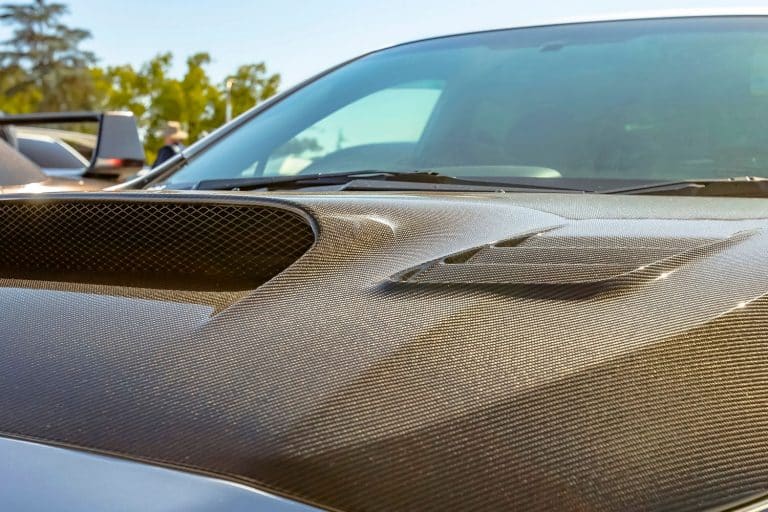 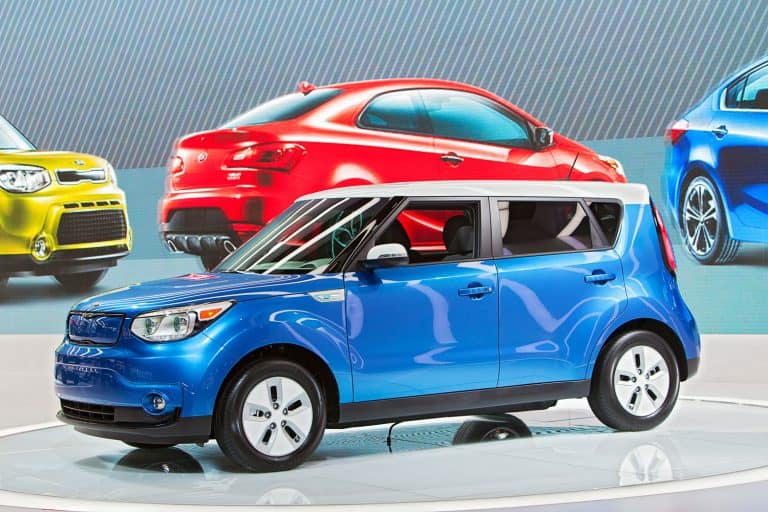 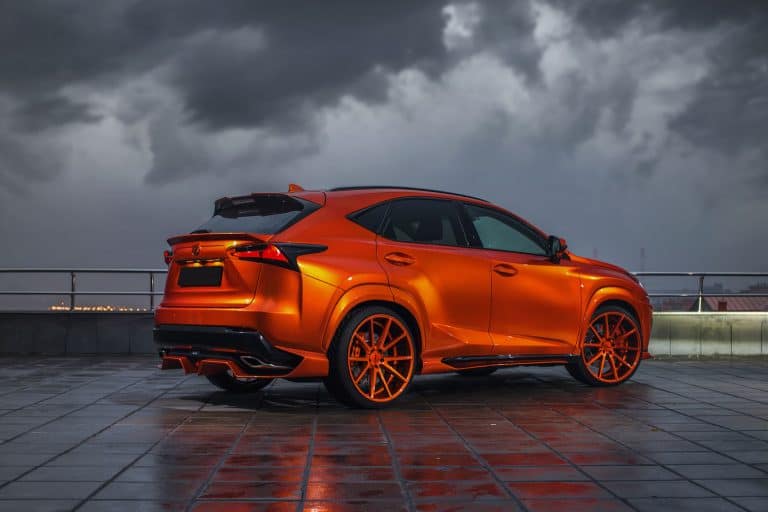 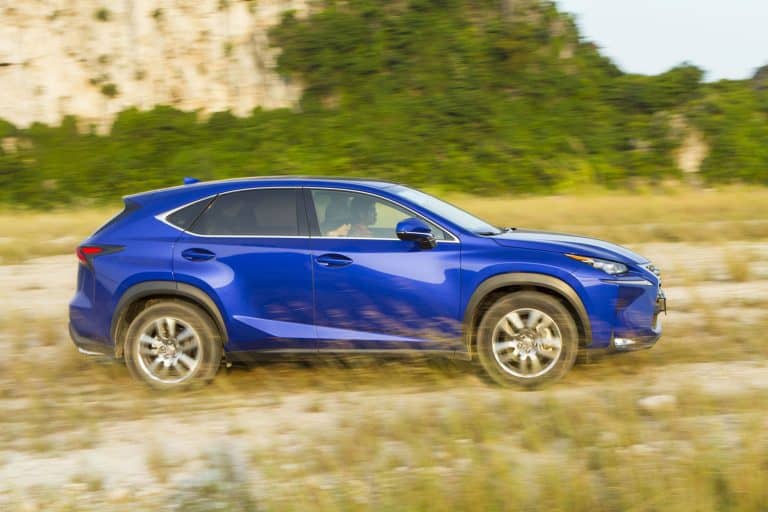