Are you looking to buy a Mazda, and you’re wondering if they have CVT transmission in any of their car models? Wonder no more, for we have researched this question and have the answer for you.

Mazda is one of the few car manufacturers that doesn’t use CVT in any of their modern car models. Mazda Demio had a CVT transmission when it was equipped with the Skyactiv-G 1.3L engine. It was the only Mazda model that used a CVT transmission.

How does CVT work, and how does it stack up against Mazda’s homegrown transmission? Learn about both in the succeeding sections. 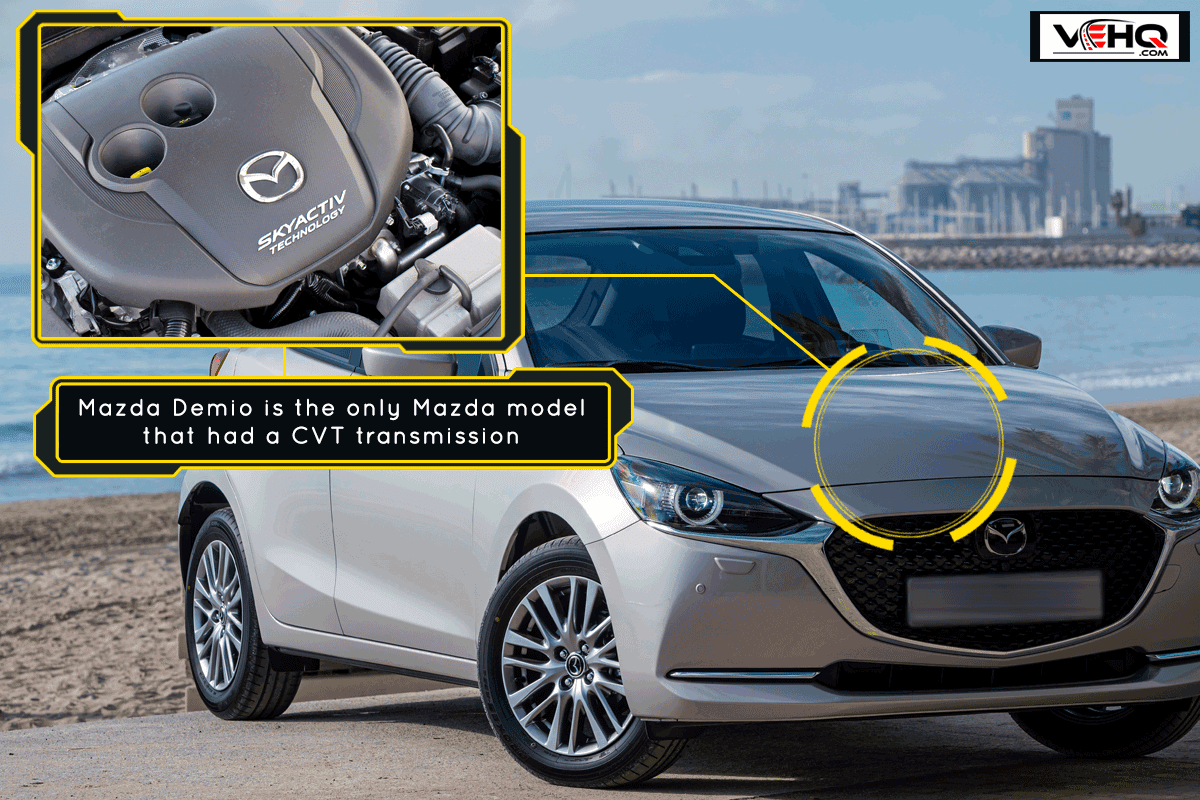 CVT or continuously variable transmission is a type of automatic transmission that doesn’t use gears to change the gear ratios of a car. What?! Nope, that wasn’t a typo.

How does a CVT work? 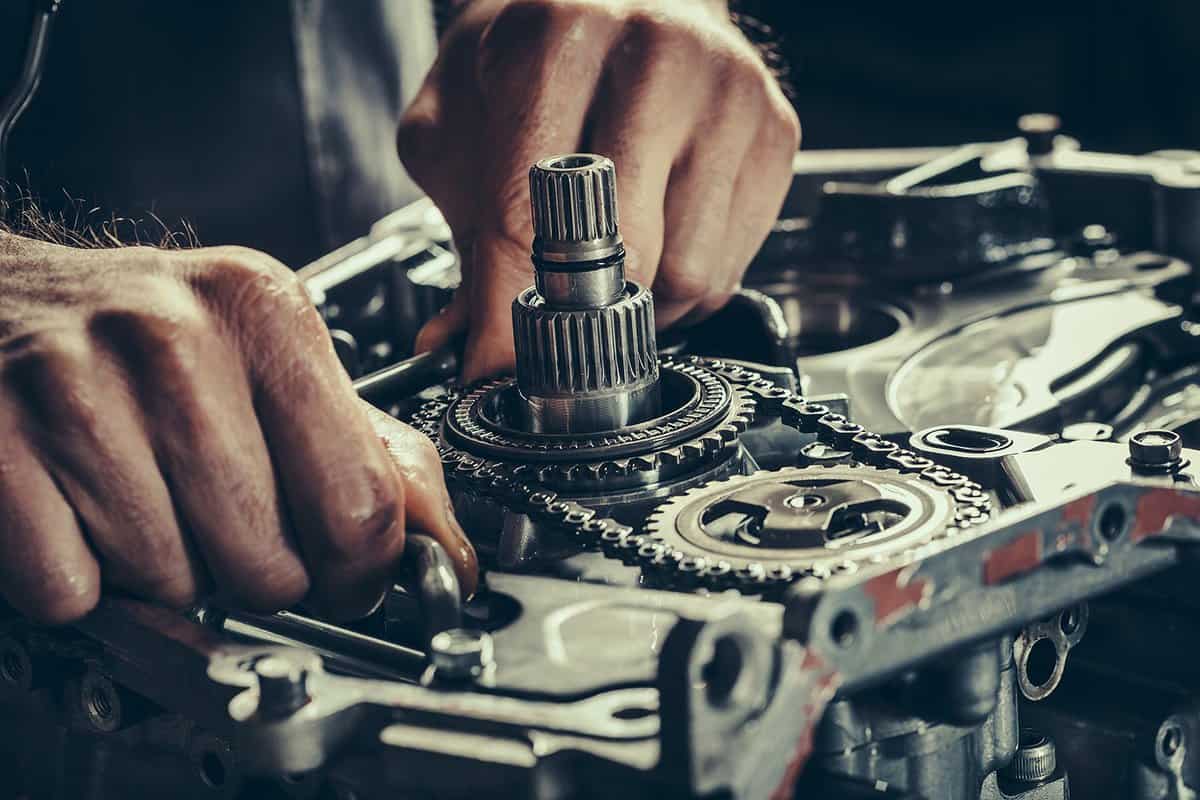 To achieve continuous transmission variability, a CVT uses two pairs of flattish metal cones. A woven directional metal belt (or rubber belt in some models) connects these two pairs of cones together. The same belt transfers power from one to the other.

One of the cone pairs receives the power from the engine. This is called the drive pulley.

The other pulley receives power from the drive pulley through the belt. This is called the driven pulley, which is connected to the car's drivetrain.

This movement is equivalent to shifting to a higher gear in a manual transmission or in a conventional automatic transmission.

A CVT transmission can stay on the sweet RPM (revolutions per minute) spot where you get the most from your fuel. This makes it more fuel efficient than conventional automatic transmission.

However, accelerating to a higher speed will force the CVT to adapt to the higher speed and move out of that sweet spot. Thus, the fuel efficiency gains happen only at moderate speeds.

A CVT is lightweight because it doesn’t have a lot of gears. This gives it a compact and simple structure. A lighter car helps improve fuel efficiency.

On the negative side, CVT has a slower response to throttle input. This could be because it has no gears to respond quickly to a sudden increase in RPM.

Moreover, the belt of a CVT transmission can break down easily and is expensive to maintain. Thus, whatever you save at the pump gets taken away during repairs.

Skyactiv-Drive is a new automatic transmission system that Mazda developed in-house. It achieves a remarkable torque transfer efficiency by implementing a wide lock-up range. Mazda began to work on the Skyactiv-Drive when it launched the Skyactiv technologies that included engine technology, body, and chassis.

Skyactiv-Drive has six to eight forward gears and one reverse gear.

The Skyactiv-Drive is always paired with a Skyactiv engine.

What is a Skyactiv engine? 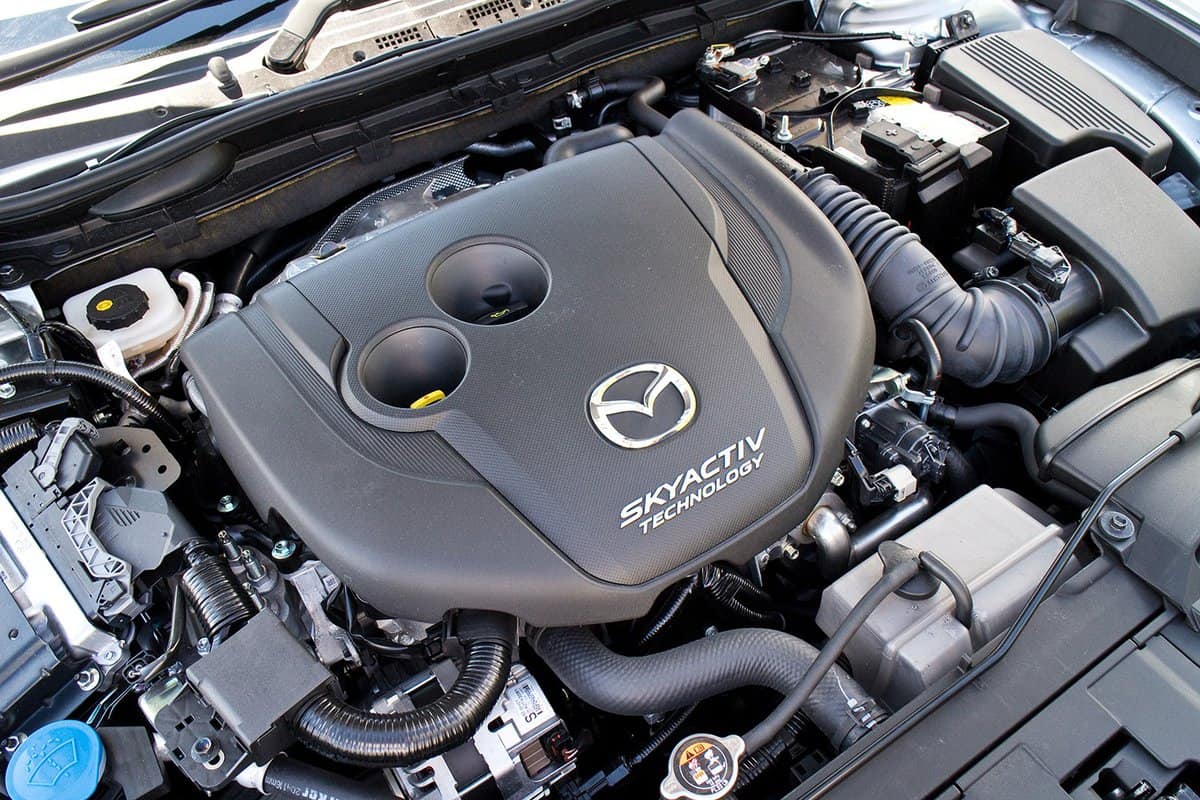 The development of the internal combustion engine has been non-stop for more than a century. However, even after all that development time, a lot of the energy potential of the fuel is lost as heat. Some of it is lost on the exhaust, transmission, and engine surfaces.

The development of the Skyactiv engine revolves around improving the engine's thermal efficiency. At the same time, its engineers are developing a lighter engine while developing technologies to reduce engine friction.

The focus of Mazda’s engine development is the air-to-fuel ratio, compression ratio, combustion timing and duration, pumping loss, and mechanical friction loss. When the initial variation of the Skyactiv engine was revealed, the compression ratio was the central feature of the engine.

The common approach of manufacturers in developing a fuel-efficient engine is to downsize engine displacement. They will then install a turbo in the now-smaller engine to replace the lost power.

Mazda took a different strategy. Instead of downsizing its engine, Mazda chose to improve the compression ratio.

A high compression ratio allows the engine to get more power from a smaller amount of fuel and air mixture. It makes it possible to make a lean air-to-fuel mix. Thus, you will need less fuel to get a large amount of power.

Fuel efficient with lesser emissions. So, why don’t all car manufacturers use a high compression ratio?

High compression engines are prone to unpredictable combustion and detonation. Gasoline—especially those with low octane ratings—can spontaneously combust when you expose it to high compression. This can lead to engine knock, which is bad for the engine’s longevity and efficiency.

How did Mazda solve this problem?

Mazda redesigned its pistons by adding a small combustion bowl that mitigates the effect of precombustion because it is kept at the center of the piston. The fuel injectors provide quick and precise fuel sprays, reducing the time for the cylinder to get into trouble.

The engine also scavenges exhaust gases, cools them, and sends them back to the engine to reduce the heat from a high compression ratio. 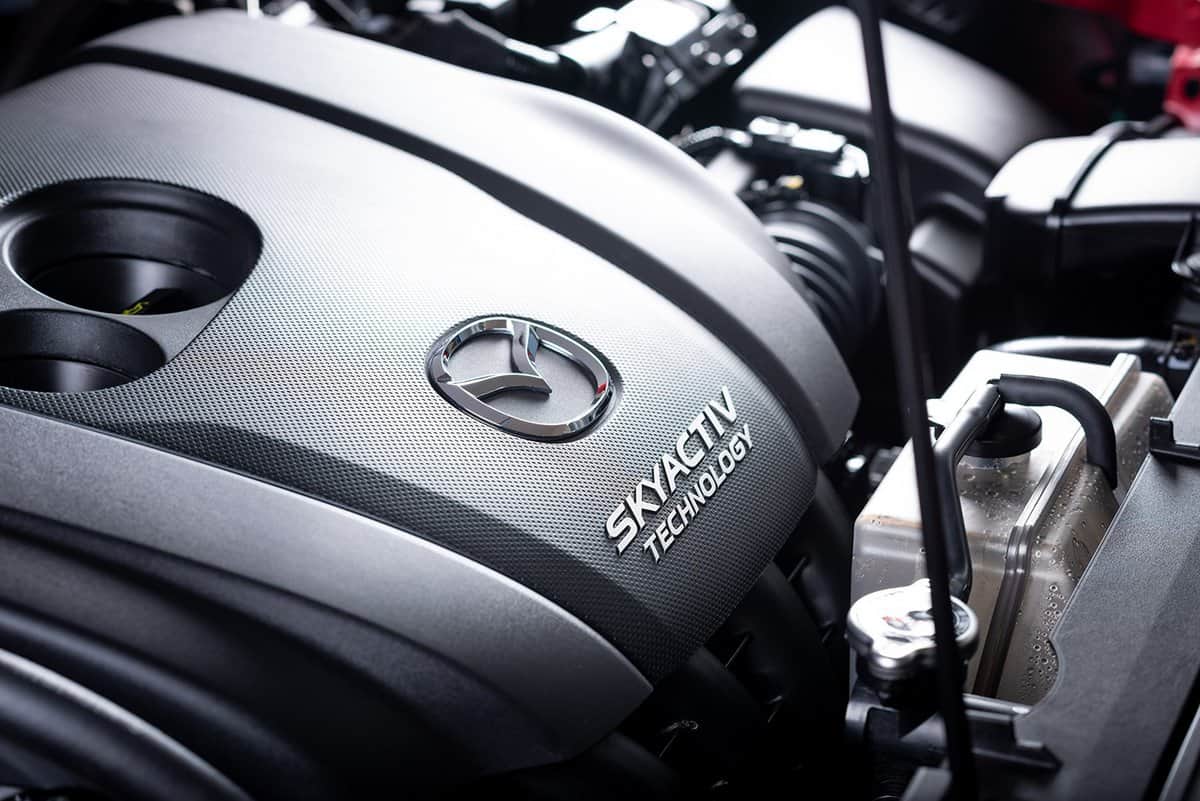 Mazda cars that use the Skyactiv engines do not have to use premium gasoline. You can use regular gasoline for your Skyactive Mazda and not worry about premature combustion.

However, models that use the turbocharged Skyactiv engine—like the one in the Carbon Edition model—should use premium gasoline.

If you’re unsure which engine is on your Mazda, check the user manual or the trunk lid. There is a badge-like sticker on the trunk lid that says “Turbo” if your Mazda uses a turbocharged engine. However, if all you see is a “Skyactiv-G” badge sticker, then your Mazda is using the standard Skyactiv engine.

Skyactive-G means that your Mazda has a gasoline engine, while Skyactive-D means it has a diesel engine.

Why is it called SKYACTIV?

Skyactiv came from the phrase “The sky’s the limit.” This phrase embodies Mazda’s commitment to designing a more efficient car, going beyond any possible hurdle to get there.

Is Mazda more reliable than Toyota?

The same report concluded that one of the reasons why Mazda had a great score is because it redesigns its car models conservatively. It has generally been avoiding risky new part upgrades.

Could this be why it has stayed away from CVT even when other car manufacturers embraced it? Maybe. Its entire lineup shared most of its tested platforms and components.

The Skyactiv-Drive transmission is a fuel-efficient automatic transmission that has excellent torque transfer.

Mazda is known to be one of the few car manufacturers who moved away from the CVT solution to achieve a fuel-efficient automatic transmission.

Does The Mazda CX-9 Have A Sunroof?