If you are shopping for a new SUV this year, you probably want to make sure that you choose a model with third-row seating. A third row ensures that you will get the full benefits of owning an SUV, like space and comfort. The Kia Telluride is one of the best SUV models on the market this year, but does it have a third row? We have thoroughly researched this model and have the answer for you in this post.

The Kia Telluride does have a third-row bench that can sit up to three people. The second row and front seat both have ample, comfortable captain's chairs. There are possibilities to increase storage space by folding down the second and third-row seats independently or all together.

The Telluride SUV has adequate space for both passengers and cargo storage. However, there is a lot more that needs to be discussed regarding the spatial capabilities of this SUV. Please continue reading to find out more about the seating and cargo options available with the Kia Telluride and other models in the Kia lineup. 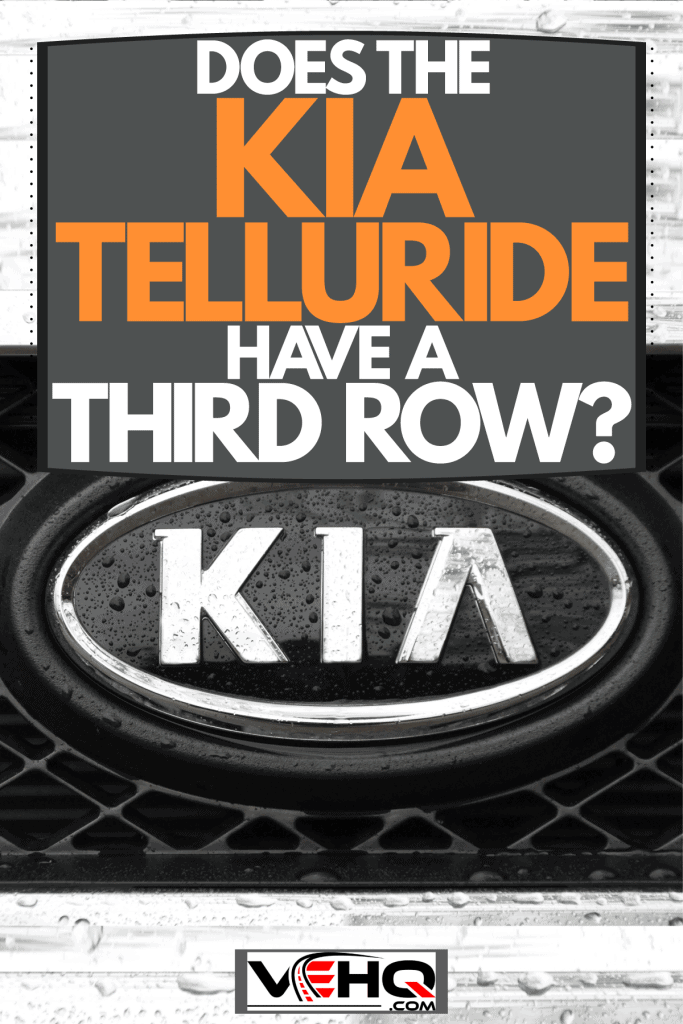 Seating Configurations In The Kia Telluride

The standard Kia Telluride has seating for up to seven people, including the driver. The two front seats are standard captain's chairs like those found in nearly all larger vehicles like SUVs. Of course, the driver seat is outfitted with typical adjustment features to allow for the most comfortable driving experience possible. But the passenger seat is similarly equipped with eight different ways to adjust it for maximum comfort.

Like the front seats, the second-row seats are also single captain's chairs. Even though they don't have the adjustment possibilities that the front seats do, they do have button-activated automatic seat folding and sliding, making cargo optimization simple. There is a center armrest between the two second-row seats that houses two cupholders.

All four single captain's chairs in the first and second row are heated and ventilated to keep you and your passengers either warm or cool, depending on the season. The second-row captain's chairs of the Telluride can sometimes be swapped out for a three-seat bench that matches the backseat. This brings the maximum passenger number from seven to eight.

Finally, the third-row seats are in the form of a bench that can seat up to three people. The two far seats that are on the driver side and passenger side are suitable for anyone, but the middle seat might be a little small for adults.

How Much Legroom Does The Kia Telluride Have?

The Kia Telluride may have third-row seating, but is it at the cost of space and comfort in the back seats? In most vehicles, the amount of legroom decreases the further back you sit in the car. However, the legroom is the same no matter which seat or row you take in the Telluride. The legroom in all seats of the Telluride measures 41.4 inches by 42.4-inches by 31.4 inches.

Can You Fit Three Car Seats In The Kia Telluride?

Many people who buy an SUV with a third row have large families and the need to support several car seats. Thankfully, there is plenty of room for car seats in the Kia Telluride, even three of them. The second-row captain's chairs can comfortably support a car seat, and you could install up to three car seats on the third-row bench. This brings the total potential car seats up to five, though the optimal number is actually three, due to the three seats with LATCH connections.

Does The Kia Telluride Have A LATCH System?

Speaking of car seats, you may be wondering if the Telluride has a LATCH system. LATCH stands for Lower Anchors and Tethers for Children, and the feature makes installing and removing child car seats quicker, easier, and safer. The Kia Telluride has three seats with LATCH systems; the two-second row seats and the driver's side seat in the third row. Please note that this system only works with LATCH-compatible child car seats.

Cargo Space In The Kia Telluride

The Kia Telluride is certainly spacious for passengers, but how does it do with cargo? And how much cargo can the SUV hold when all of the seats are in use? The Kia Telluride has a maximum cargo capacity of 87 cubic feet, with the second and third-row seats folded down. This allows for plenty of space for just about anything that daily life can require.

How Much Cargo Space Does The Kia Telluride Have Behind The Third Row?

More often than not, you will be carrying people and cargo in your Kia Telluride. You definitely want to have plenty of space for passengers and their luggage on that next weekend road trip. Even with the third-row seating in the upward position, there is a large trunk just behind it with 21 cubic feet of storage space.

If you don't need to carry extra passengers to your destination but instead need to move furniture or boxes during an in-town move, the Kia Telluride will also get the job done. Both the second and third-row seats of the Telluride fold down to be completely flat, creating that maximum of 87 cubic feet of storage capacity.

Additionally, the third row has a 60/40 split, which allows you to make unique combinations of seating arrangements for when you need to carry people and long cargo like skis, lumber, or fishing rods. The second-row captain's chairs also fold down independently of one another. There is even a sub-floor cargo hold in the trunk for keeping valuables hidden safely away.

What Kia Models Have Third-Row Seating?

First, the Kia Carnival MPV is a full-size SUV that seats eight in slide-flex seating with three available configurations. The Carnival also includes a driver to rear passenger audio system so passengers can hear each other no matter where they are seated in the large SUV. The Carnival MPV has many luxury and technology features that make it a real competitor in the SUV space.

Second, the Kia Sorento is a slightly smaller SUV that only seats seven passengers. Like the Telluride, the Sorento has fully adjustable second-row captain's chairs. All of the second and third-row seats fold down to allow for maximum storage capacity. The third-row seats are also 50/50 folding seats that allow you only to fold half of the seat down when you need to bring lots of passengers and cargo.

If you plan to purchase an SUV in this model year, the Kia Telluride is a solid choice. The Telluride has optimal seating for all of your passengers with its third row and has sufficient cargo capacity for anything from weekend trips to moving days. If the Telluride isn't exactly what you're looking for, Kia has several other SUV models with third-row seating that are worth exploring as well.

Is The Hyundai Palisade Bigger Than The Kia Telluride?

What SUVs Have Fold Flat Seat that Fold Into the Floor?