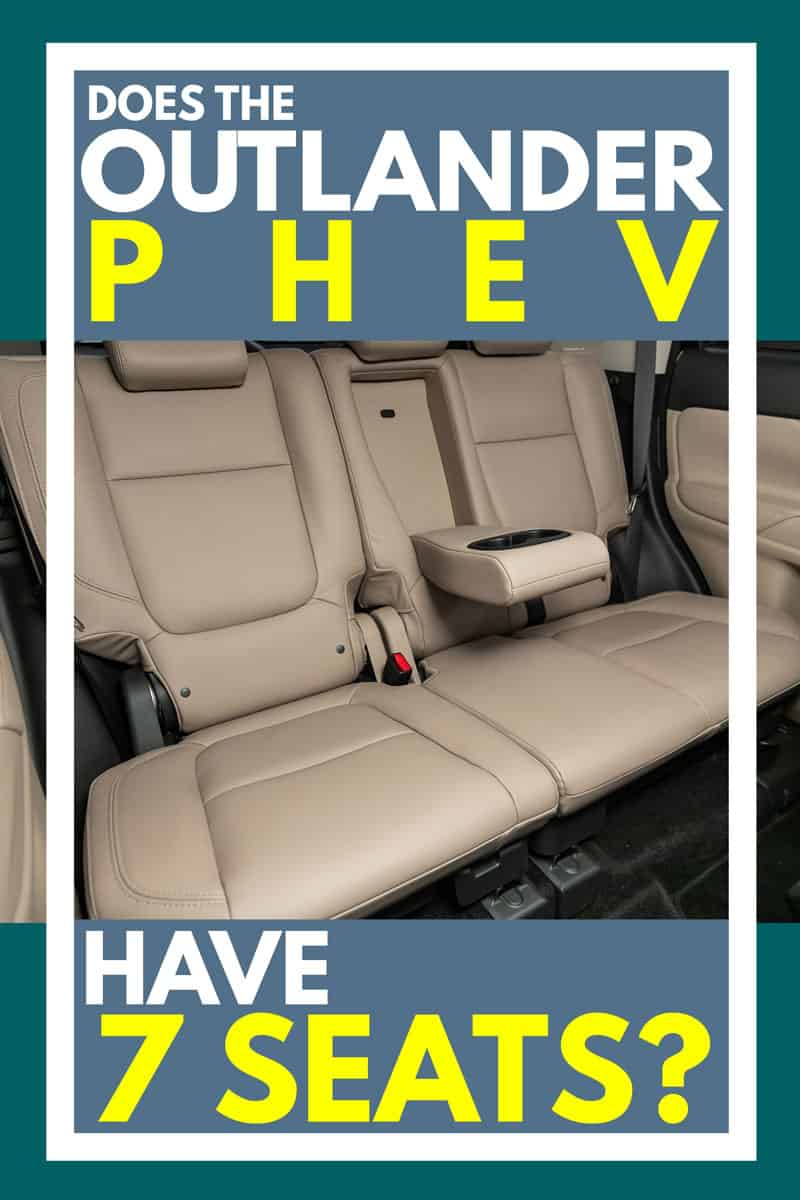 Are you considering your next SUV and thinking about a PHEV version? If so, the Outlander PHEV is probably one of the cars that you're looking into. If you have a big family, you're probably wondering about the number of seats. Does the Outlander PHEV have seven seats like its non-hybrid counterpart? We did the research for you and compared the two vehicles.

The Outlander PHEV only comes in a five-seat configuration. The PHEV’s need space for a battery pack that powers the electric motor. To make space for the pack, Mitsubishi had to lose the third row of seating on the plugin model. That's why the Outlander PHEV seats five passengers while the gas-only Outlander has seven. In Europe, the 2020 PHEV models have been adjusted to include six seats but the US version is still limited to 5 passengers only.

You might still be wondering why Mitsubishi can’t squeeze a third row into the Outlander PHEV. Plenty of other smaller SUVs have been able to accomplish seating for seven. We dig into this post. Read on as we explain the impact of battery packs on electric cars. We’ll also explore whether there are plans to build an Outlander PHEV with more seating capacity.

A sought-after feature in the Outlander is passenger seating capacity. The non-hybrid Outlander has the third row and seats up to seven riders. In general, hybrid models look like their counterparts, but they can't be built the same exact way. That got us wondering about seating in the hybrid version of the Outlander.

The Outlander PHEV is the world’s best-selling plug-in hybrid SUV on the market. But, they’ve only been selling in the U.S. for a couple of years. And, in the U.S., consumers tend to want cars with more space available for people and their stuff. From the outside, the Outlander and Outlander PHEV look almost identical. They are the same length and same height.

Inside, the interiors are similar. But, the Outlander PHEV only seats five riders in two rows, and the Outlander seats seven in three rows. Unless you pop the hood or look under the car, it's not obvious why a third row doesn't fit in the PHEV.

The PHEV has a gas engine, an electric motor at two axels, and a battery pack on the floor at the rear of the car. The battery placement in the PHEV is under the floor toward the back of the car, taking up the space needed for that extra row. The Outlander has a gas engine and all the parts that go along with it. All those components sit at the front of the car, under the hood.

Otherwise, both Outlanders have a roomy interior and ample cargo storage.

Backseat passengers can stretch out in the PHEV with almost 40 inches of legroom. The legroom in the non-PHEV is slightly less. While we are talking about legroom, this is also a good time to point out that Mitsubishi was already working with some space constraints for the third row. Sure, two passengers can ride in the third row, but it’s a tight fit. Legroom in this row is about 28 inches. Compare that to the more spacious SUVs that offer anywhere from 33 inches to 36 inches in their third rows.

What is the Best 7-Seater Hybrid?

We know that battery packs eat up interior space in SUVs. But car designers have been able to crack the code and get third rows into hybrids without much compromise to the interior space.

As follows is a list of some of the best hybrid SUVs with a third row on the market:

Will Mitsubishi Add More Seats to the Outlander PHEV?

In Europe, the 2020 Outlander PHEV is offered in a six-seater configuration but that doesn't seem to be available in the US yet.

However, the company did reveal a concept car earlier this year. And, according to Green Car Reports, it looks like a new version of the Outlander. Mitsubishi Engelberg Tourer is the current name of the concept vehicle. In concept mode, this car has three rows. It is unknown whether the Engelberg Tourer will reach production or even replace the Outlander PHEV. Given the increased interest in electric vehicles, though, we will be on the lookout for it.

Even though the Outlander PHEV only seats five passengers, it has found somewhat of a niche in the market. Most SUVs are not available as a plugin. Of course, that is changing as the electric market evolves, but for now, competition is limited to a few models. And, most of those models fall into the luxury category where pricing starts over $50,000. The 2020 Outlander PHEV starts at $36,095. It provides a great driving experience with its multiple engines and stabilizing systems, as well as superior safety ratings. If you want to read more about this vehicle, check out our post: Is the Outlander PHEV a good car?

Mitsubishi’s Outlander PHEV is the only plugin crossover with Level 1, Level 2, and DC Fast Charging. That fast charging is a big deal—you can juice up the battery and be on your way in 30 minutes or less. Another perk of the Outlander PHEV is that it has an all-wheel drive.

The only thing that might be missing from the Outlander PHEV is seating for seven - but keep an eye out for future changes there as well.

SUV's are really reliable and perfect for any family event, check out Which SUV has the Best Gas Mileage? So you can choose what SUV might suit your budget.