Sunroofs are features in cars that can bring a sense of openness to your vehicle. Unfortunately, these luxury designs aren't an option for all the vehicles on the market. Volkswagen has included variations of the sunroof in their cars for many years. Does this include the Volkswagen Golf? We've checked the specifications and can tell you whether or not this car has a sunroof.

The following Volkswagen Golf models and trims come with a panoramic sunroof:

Now that you know which Golf models and trim come with a sunroof, let's get more in-depth. Keep reading to get more information on the Golf as well as how the panoramic sunroof works! 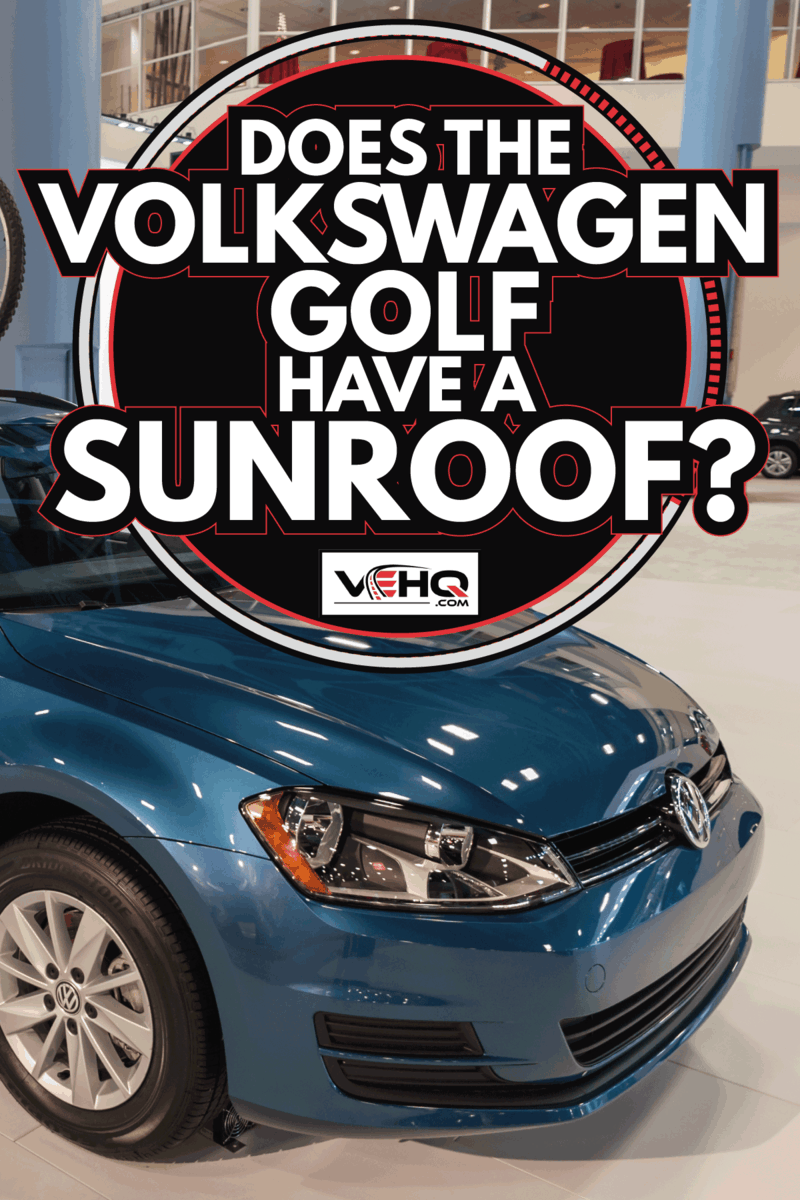 Volkswagen has been manufacturing the Golf since 1974. The first generation of vehicles, Golf Mk1, was a replacement for the Volkswagen Beetle. Since then, this popular vehicle has gone through many changes. The Golf is currently on its eighth generation of cars. Volkswagen introduced the Golf Mk8 in October of 2019.

The Volkswagen Golf is the company's best-selling model. It is popular worldwide and is ranked among the top three best-selling vehicles. The Golf has won World Car of The Year with their Mk6 and Mk7 models in 2009 and 2013.

It has also won the European Car of the Year twice. The first was in 1992 and the second in 2013. It is one of three cars to have managed to win this prestigious title twice.

The Volkswagen Golf GTI has three different trims: the Golf GTI S, SE, or Autobahn. Each trim is available as either a 6-speed manual or Turbo 7-speed DSG automatic transmission with a 2.0L engine. The Golf GTI has 228 horsepower.

Disadvantages of A Panoramic Sunroof

The addition of a sunroof can negatively affect a vehicle. Sunroofs tend to take up a lot of space, which cuts into the amount of headroom you have. These devices need mechanisms to move and places to put those. If you're a taller driver, this may pose a problem for you.

Sunroofs can make your vehicle less structurally sound. A car with an enclosed roof is stronger than a car with a panoramic sunroof. While the technology and designs have gotten better, there are still risks to driving with glass in your ceiling.

Finally, a sunroof isn't practical in every region. If you live in an area with extreme heat or cold, your car will be more easily affected by the outside temperature. While the sunroof will still insulate your vehicle if it's closed, it will still deal with temperature fluctuations because of the weather.

Benefits of a panoramic sunroof

Despite the disadvantages, sunroofs have been a popular luxury car addition for many years. This trend tends to be more prevalent in European vehicles, although the trend is beginning to catch on in North America. If you're unfamiliar with sunroofs, you may be curious about what's so special about this particular car feature.

While a sunroof does not improve a vehicle's performance, it can enhance the overall experience of driving. The size of a panoramic sunroof means you and your passengers get to enjoy excellent scenery while driving. Unless you drive a convertible, your field of vision is greatly limited while handling a vehicle. A panoramic sunroof allows you to see previously hidden views.

Sunroofs are also excellent ways to circulate new air into a vehicle. This can help clear out odors or even act as a natural air conditioner. Finally, an open sunroof should create less noise than an open window would. This makes having conversations or listening to music much more manageable.

The Volkswagen 2022 Golf R is a sport or high-performance model. The Mk8 Golf R will be an all-wheel-drive vehicle and available in either a six-speed manual drive or a seven-speed dual-clutch automatic. This car is expected to have a maximum horsepower of 288 at an RPM of 5400.

While some of the specifications may change by the time the car starts selling by the end of 2021, you can expect a few things from the Golf R. The Golf R has been highly updated as far as technology goes.

Most tasks are now controlled through a central display. There is also an updated lighting system. This system allows you to pick between 30 different ambient colors. The Golf R will launch with one trim, and it will come with a panoramic sunroof.

How do you open a Volkswagen Golf sunroof?

The Mk8 Volkswagen Golf is opened via a control panel located on the ceiling towards the front of the car. Previous versions of this vehicle are also controlled similarly. However, the sunroof control typically looked like a dial or a small toggle or lever.

Finally, you can make minute changes by pressing the front or back of the control panel. To tilt or vent the roof, you'll press the center of the control panel. A small picture should indicate the correct spot. Although, there can be slight differences in design depending on your car's trim.

If you have an older model Volkswagen, the concept is still the same. The lever system is most similar to the current version. Pull the toggle forward or backward depending on if you want the sunroof open or closed.

For the dial configuration, you'll turn the knob to the level of openness you want your sunroof to be. To vent, you will pull the knob towards you and then back in to close it again.

Which Volkswagen has a panoramic sunroof?

Volkswagen offers the panoramic sunroof for many of its current makes and models. The following vehicles come standard with this feature:

Panoramic sunroofs are a fairly standard feature in most of Volkswagen's cars. These luxury features can provide extra ventilation and upgrade the entire driving process by providing a more scenic view.

For more information on this type of car, read the following:

Can A Volkswagen Golf Tow A Trailer?

Does The Volkswagen Golf Have Bluetooth?

Volkswagen Golf Not Starting - What To Do?