Fuel injectors are an essential part of the engine management system. However, can you still drive your vehicle if one or more fail? Let's take a look.

Technically, you can still drive with a bad fuel injector. However, it is advised against doing so because a failing fuel injector will cause the engine to run lean. This can lead to engine damage, poor fuel economy, and decreased performance.

It is important not to ignore a failing fuel injector as it can cause irreversible issues to your engine. In this article, we will discuss these potential risks and how to avoid them. In addition, we will answer other frequently asked questions about fuel injectors, so read on! 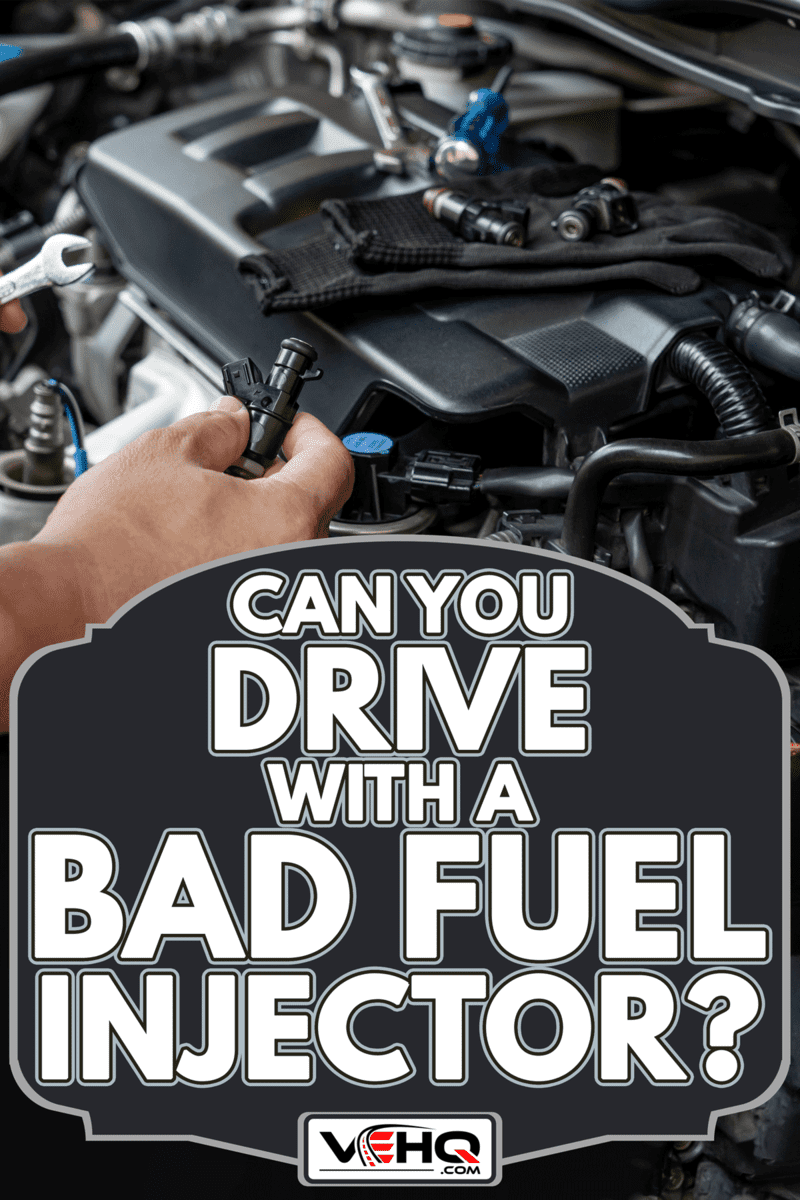 Why You Shouldn't Drive With A Bad Fuel Injector

A fuel injector is a part of the engine management system that sprays fuel into the engine. They are responsible for supplying the engine with the correct amount of fuel and ensuring it is burned efficiently.

However, if a fuel injector is failing, it can cause the engine to run lean. This means that there is not enough fuel being supplied to the engine, and as a result, the engine will not run as efficiently. 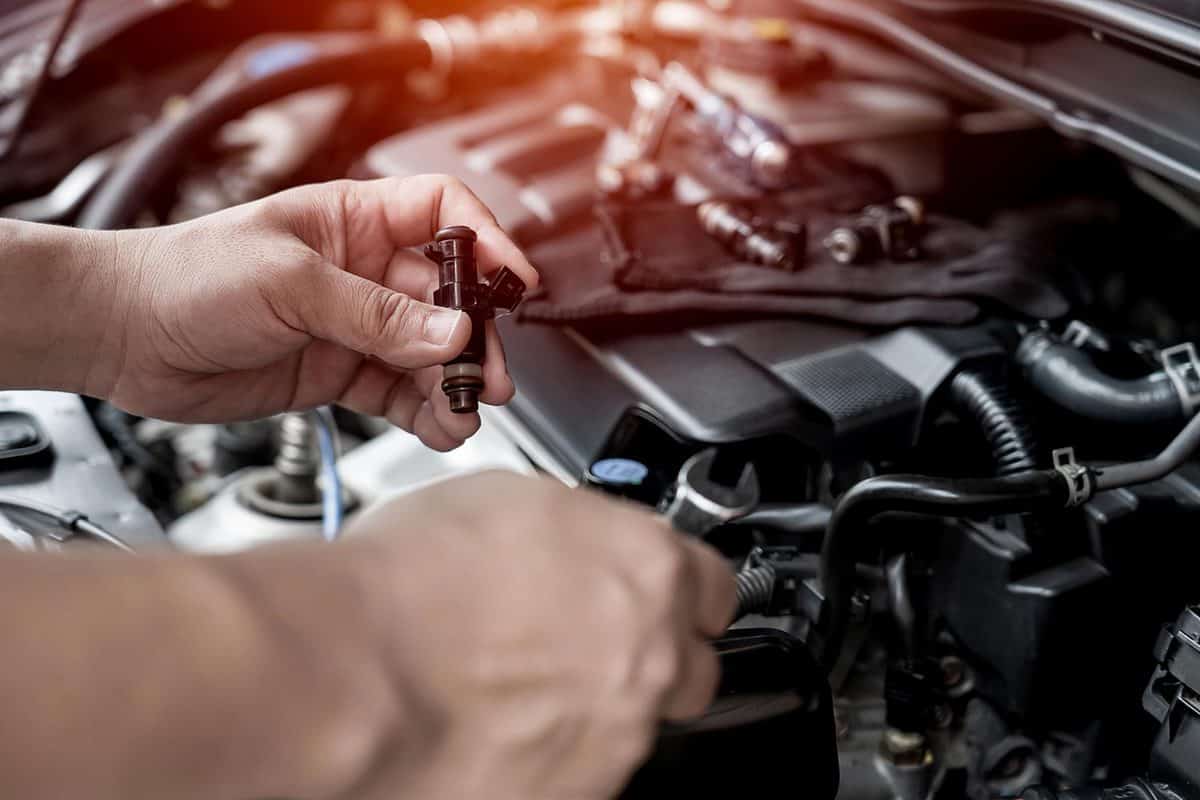 In addition, running lean can lead to engine damage and poor fuel economy.

The vehicle may still drive with a bad fuel injector, but it is only a matter of time before the engine starts to experience problems. Therefore, it is crucial to have a failing fuel injector fixed as soon as possible to avoid any further damage to the engine.

The issue will persist even as you idle, so your best course of action is to pull over and call a tow truck. Understanding the warning signs of a bad fuel injector is important, so read on!

What Are The Symptoms Of A Bad Fuel Injector? 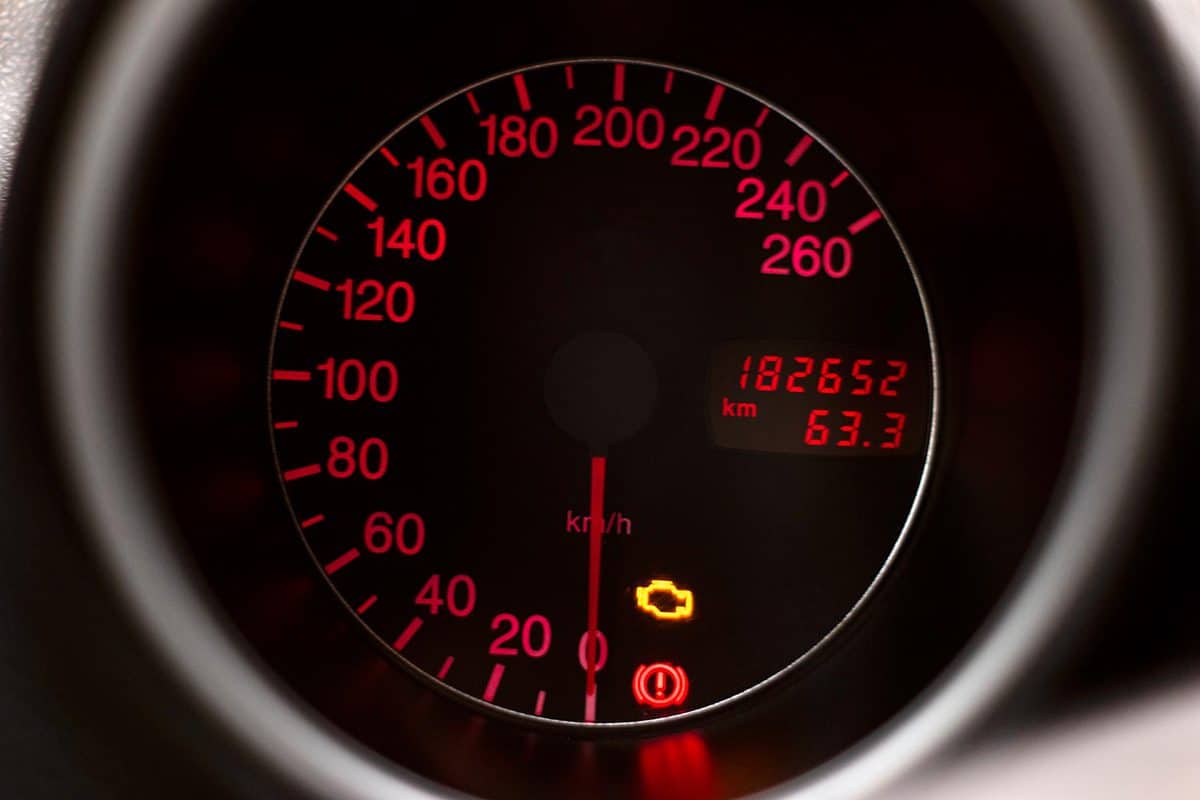 Several symptoms may indicate that a fuel injector is failing. These include:

If it is flashing, that is bad news, and you should not drive the car as this could cause catastrophic engine damage.

If one or more cylinders are not firing correctly, it will cause the engine to misfire. This can be felt as a shaking sensation when idling or driving. The engine may also sound rough when idling.

If the engine is idling rough, it signifies that something is wrong. The engine should run smoothly when idle. If it is not, it is likely due to a problem with the fuel injectors.

If you smell fuel when the engine is running, it could be due to a leaking injector. Fuel injectors are under high pressure, and if they are not functioning correctly, they can leak fuel.

If you notice that your fuel economy has decreased, it could be due to a failing fuel injector. The engine will have to work harder to run and, as a result, will use more fuel.

If the engine is surging or stalling, it is a sign that the injectors are not supplying the correct amount of fuel to the engine. This can be dangerous as it can cause the engine to stall in traffic.

How Do You Fix A Fuel Injector?

If you have a failing fuel injector, the best action is to have it replaced. The best way to go about this is by having them replaced by a qualified mechanic.

They will first diagnose the problem to ensure that the fuel injector is failing. Then, however, they will suggest replacing all of the fuel injectors to avoid any future issues in most cases.

Usually, if one fuel injector has failed, the others aren't far behind, so it is best to replace them all at once.

The cost to have a fuel injector replaced will depend on the make and model of your vehicle. However, it is typically a relatively expensive repair.

That said, you can expect to pay in the high hundreds to mid-thousands for the replacement.

Can You Clean Fuel Injectors Yourself?

You can clean your fuel injectors yourself, but it is best to leave this job to a professional. They will have the knowledge and experience to do it properly.

It can be extensive work to clean all of the injectors, and you may not have the necessary tools to reach all of them. Additionally, attempting to clean the fuel injectors yourself could damage them beyond repair.

How Can I Prevent Fuel Injector Issues?

The best way to prevent fuel injector issues is to have them regularly serviced. This will ensure that they are always in good working condition and will not fail prematurely.

It is also vital to avoid running the engine lean. This can be caused by several factors, such as a dirty air filter or a faulty oxygen sensor. You should address these issues as soon as possible to avoid damage to the fuel injectors.

Lastly, try using a fuel injector cleaner for your fuel tank. The fuel additives can help with fuel mileage and performance. 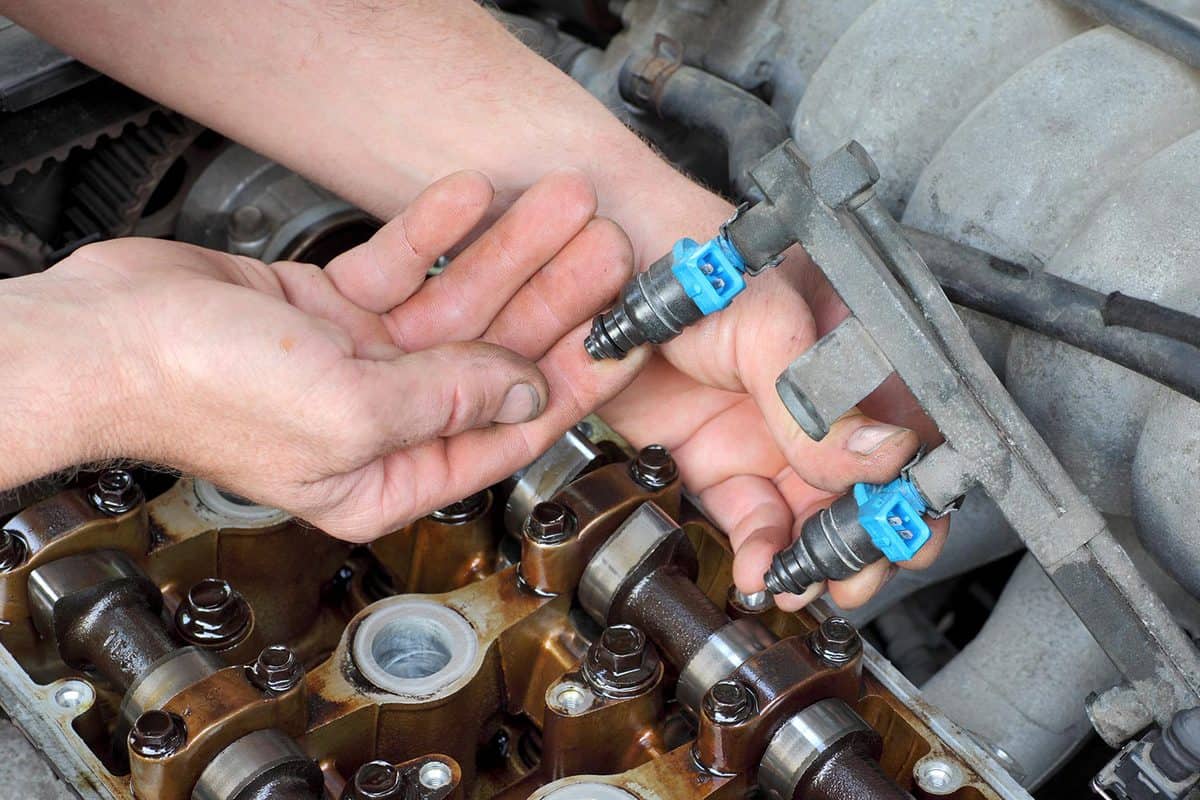 What Causes Fuel Injectors To Fail?

There are several reasons why a fuel injector may fail. The most common reason is deposits build-up on the injectors. This can be caused by using lower-quality fuel or oil.

In addition, rust can find its way into the fuel injectors and cause them to fail. This is more common in vehicles driven in saltwater areas, as the salt can corrode the injectors.

Typically, the debris or rust plugs the armature and pintle inside the injector, causing it to fail. If left unchecked, this will cause misfires, power loss, and engine damage.

How Much Does It Cost To Clean A Fuel Injector?

The cost to clean fuel injectors will depend on the make and model of your vehicle. However, it will cost between $50 and $100 to have them professionally cleaned in most cases.

You should have the fuel injectors cleaned every three years to prevent build-up and ensure that they are always in good working condition.

If you bought your vehicle used, then ask the previous owner when the last time you cleaned the fuel injectors. If it has been more than three years, it is probably time to have them serviced.

You can also clean the fuel injectors yourself with elbow grease and the right tools. However, it is best to leave this job to a professional as they will have the knowledge and experience to do it properly.

Additionally, they will also have the necessary tools to reach all injectors. Attempting to clean the fuel injectors yourself could damage them beyond repair.

How Often Should You Replace A Fuel Injector?

Depending on how they are cared for, fuel injectors can last up to 100,000 miles. However, if they are not regularly serviced, they will only last around 50,000 miles.

Some fuel injectors are rated to last the vehicle's lifetime, but that isn't always the case. Several factors come into play, such as the fuel quality, how often the car is driven, and the driving conditions.

For example, if you live in conditions where there is road salt or dirt roads, then the fuel injectors will not last as long as if you live in a clean, dry area. 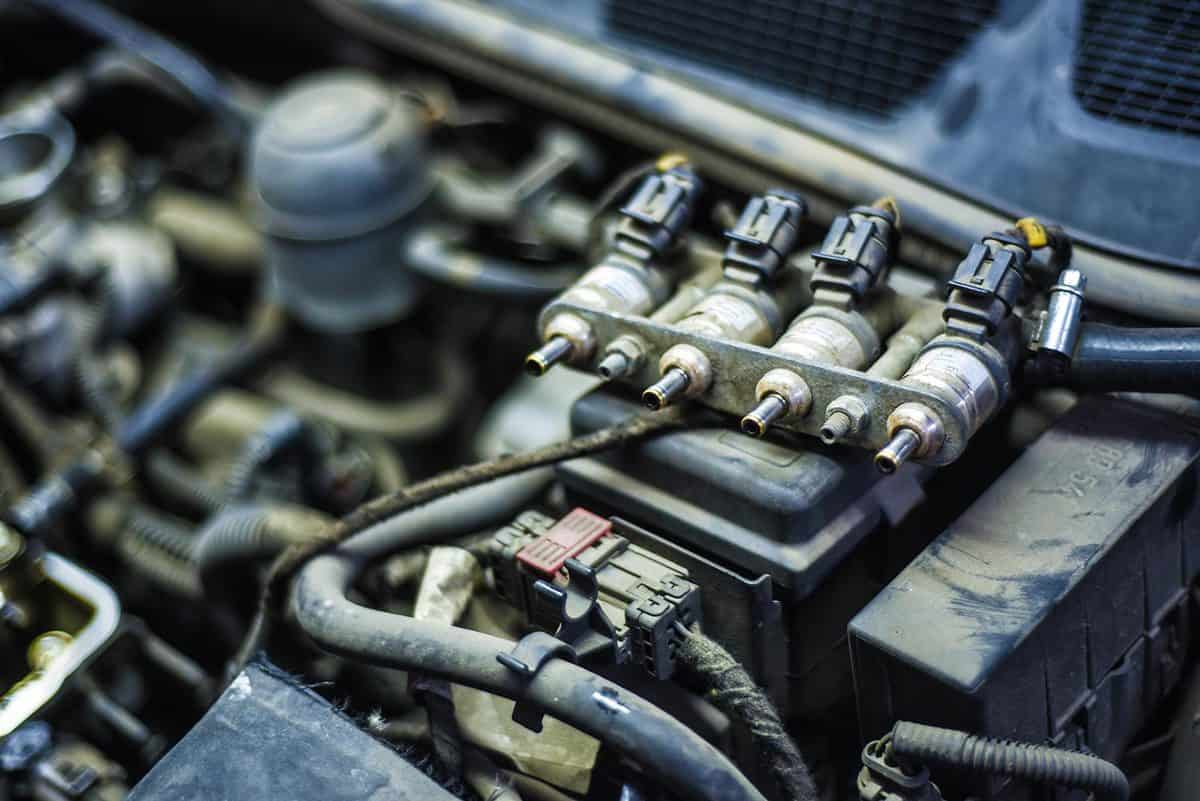 The number of fuel injectors in a vehicle is not always an indicator of performance. For example, some high-performance cars only have four or six cylinders but multiple injectors per cylinder.

Fuel injectors are an essential part of any vehicle. Without them, the engine would not be able to run.

Therefore, it is crucial to keep them clean and in good working condition. The best way to do this is to have them serviced every three years or so.

If you notice any issues with your vehicle's performance, such as a loss in power or misfires, it is best to check the fuel injectors. If you wait too long to service them, it can cause irreparable damage.

Do Fuel Injectors Have Polarity? [Negative And Positive]