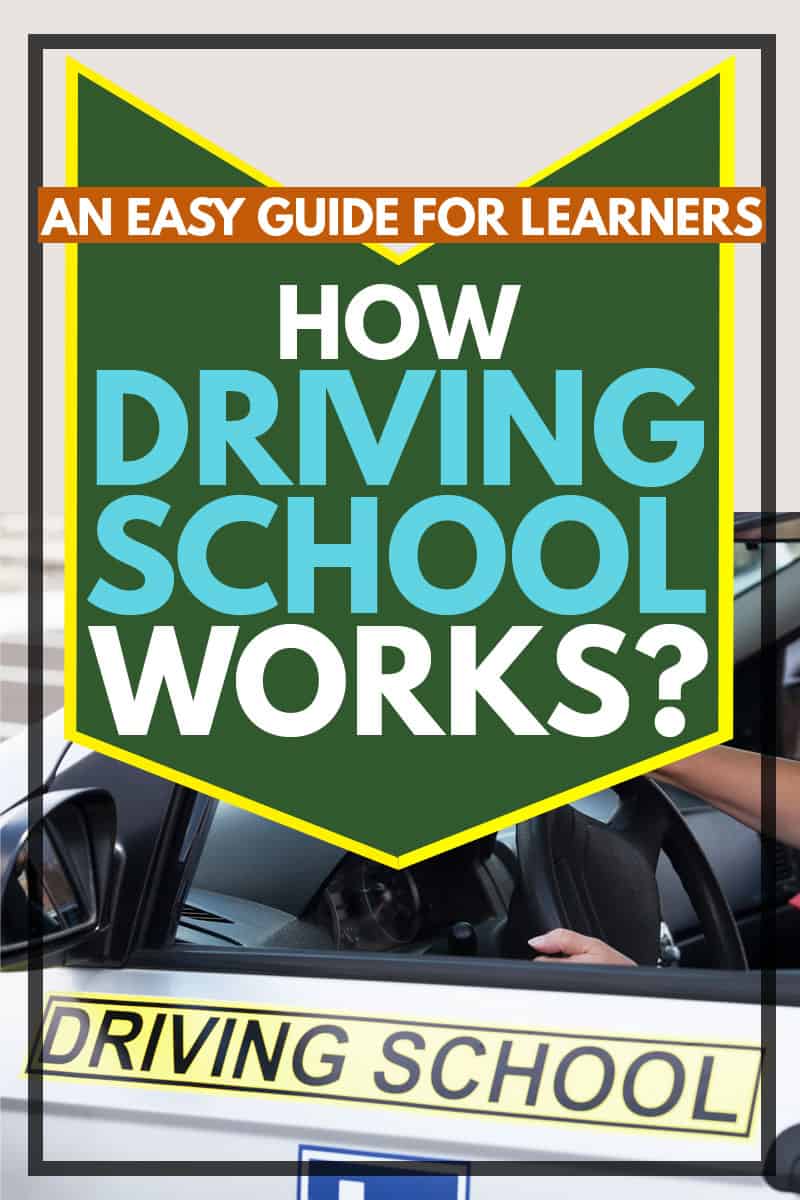 You may have learned some driving basics in school or from your parents, but you feel you need more first-hand experience before you try for your driver’s license. You’ve heard of driving school, but is this the right option for you? How exactly does driving school work anyway?

Driving school has both instructional and driving practice components. The instructional component augments or replaces what a teen learns should their school provide driver’s ed. The driving component gives the teen real experience learning basics like turning, stopping, and more, allowing them to practice in a safe environment.

In this guide, we will walk you through everything you need to know about driving school. This includes what the school teaches, reasons to consider driving school, the cost, and even what type of car you’ll drive. Keep reading, as you won’t want to miss it.

How Does Driving School Work?

It used to be that when a teen wanted to learn how to drive, they would get instructional lessons through their school. While they wouldn’t learn everything, they’d glean a lot of driving basics. Through further study, the teen would be ready to pass the written component of their driver’s test. Some schools even had driving simulations or had staff drive with the students.

Many years ago, driver’s ed got cut as schools across the country have had to trim down their budgets. Thus, learning to drive has become more of an individual responsibility for each teen who wants to pursue it.

As with everything these days, it’s possible to find driving schools online. Like we said in the intro, these schools have two main components: instructional and driving. The instructional part of the program may be divided into parts. Each of these parts may be a chapter on topics such as how to share the road or how to prevent accidents.

From the comfort of their home or wherever they want to access lessons from, teens can learn the basics about driving, including what’s on their dashboard and what it means, how to use their turn signal, proper hand placement on the steering wheel, and more.

These online lessons aren’t just bucketloads of information dumped on a teen all at once. Instead, they can play games, watch videos, and learn through memes. Yes, that’s right, memes.

Within about 30 hours of lessons (non-consecutive, of course), the teen should be armed with all the knowledge they need to pass the written component of their driver’s test. This is offered by the DMV and is a comprehensive exam that seeks to test the limit of a teen’s knowledge of all things driving.

Of course, learning is just one part of being a good driver. The teen also has to get behind the wheel at some point. After passing the online driving school course, the teen gets a certificate. They can then go to their DMV for their learner’s permit.

The teen’s parents may have to pay for another driving school with instructors who can practice driving with the teen. Depending on which state the teen calls home, the requirements for this part of the driving school are different. Some states insist the teen drives X amount of hours before they can try for their driver’s license, but not all.

Why Should You Go to Driving School?

As we said in the last section, school funding of driver’s education programs is pretty much nil these days. If a school still offers driver’s ed, it’s a rarity. Those teens who don’t have school-based driver’s education will still have to learn, and a driving school is a great way to go about it.

Through a driving school, the teen will pick up all the driving basics they would have at their high school had their school still taught driver’s ed. That it’s packaged in an interactive, even interesting way may increase the appeal of a driver’s school versus classroom-taught lessons. Students may also retain more of what they learn.

The individualized approach of driver’s ed makes it easy for struggling teens as well. Not everyone learns the driving basics or behind-the-wheel-stuff as quickly as others. When all students were in the same class learning the same thing, that puts added pressure on some teens who weren’t getting it. Now, since not every teen in the school will choose the same driving school, they can learn with less of that peer pressure.

Also, if you’re an adult who’s driven for years but got slapped with a ticket, it’s worth considering enrolling in a driving school. It’s possible to rebuild your record by committing to learning to be a safer driver. The same is true if you want to shave some money off certain car insurance plans.

Do You Have to Go to Driving School?

Driving school is by no means mandatory. It’s not something a teen must pass to graduate high school or get into college. However, for most teens, being able to drive themselves around is a rite of passage for someone their age. They want to drive and can’t wait to do it.

Regardless of age, you cannot drive without a driver’s license or at least a permit. The only way to get a permit or a license is to pass the written and road tests, both of which driver’s ed can help with. Driving without a license can lead to fines, misdemeanors, and even a felony charge if done often enough.

It’s much better not to risk it. Go through the right channels and get a license through the DMV before operating a motor vehicle.

How Many Driving Lessons Are You Supposed to Take?

Like we said before, learning about driving is just one part of becoming a good driver. Practicing is another. With the written part of the DMV test passed and under their belt, the teen now gets ready for the much more daunting road test.

During their road test, the teen must sit in a car with a DMV instructor and showcase their ability to drive through a predetermined course. The course includes such elements as turns, yield signs, and stop signs for the teen to successfully navigate.

To put themselves in the best position to pass, a teen is going to spend a lot of time behind the wheel practicing. But how many driving lessons is the perfect number? There isn’t one. It’s recommended that the teen practice driving for at least 47 hours before scheduling their road test. Whether those 47 hours are divided into 47 lessons, 20, or 10 will vary.

Obviously, a teen should not spend too long behind the wheel, as they’re likely to feel fatigued and pressured by what’s to come. That could increase their likelihood of making a mistake or even causing an accident. You could be practicing with a teen in a closed course, but you still don’t want them banging up the car.

How Much Does Driving School Cost?

You may have decided that your teen needs driving school, but how much does this cost, anyway? It can vary based on state and the driving school itself. For the instructional component, either in a classroom or online, you may be charged anywhere from $30 to $180 for lessons.

As your teen graduates to the driving portion of the program, the costs are ballparked at $50 to $150 for each driving session. Yes, that can get very expensive fast, which is why so many parents opt for teaching their teens how to drive personally.

Luckily, many driving schools have packages that include both the instructional and driving components for one flat fee. This may be as low as $200 and as high as $800. Yes, this is still costly, but it’s better to let a teen learn to drive with a professional. Then they’ll be ready to be the best driver they can be.

Do You Get Behind the Wheel Right Away?

If a teen has never so much as sat in the driver’s seat of a car before, then the idea of driving right away could really jangle their nerves. Fortunately, driver’s schools begin with the instructional part of the experience first. After all, it’s not legal for a teen to drive until they have at least their learner’s permit, and they can only get that after passing the written exam.

Once the teen has their learner’s permit, then yes, they will begin driving. This doesn’t mean that during the first lesson the instructor will insist on highway driving. Instead, the instructor takes everything in baby steps.

For example, the teen might do nothing more than drive in circles around an empty parking lot for the first lesson. If they do any kind of street driving, it will be very short distances. Instructors know how stressed out a teen feels during their first times behind the wheel. They won’t add pressure by demanding the teen go several towns over.

With time, the teen will graduate to driving on more populated roads, even multi-lane streets. They could even do highway driving if they’re progressing with the driving lessons well enough. They have to learn how to handle driving on these roads at some point, after all, as well as contending with traffic. It’s much better to do this with an instructor in the passenger’s seat.

What Kind of Car Will You Be Driving in Driving School?

Since teens don’t have their own cars, they won’t be expected to provide one during the driving part of their driver’s ed. They also won’t use their parent’s cars. Instead, the instructor will provide their own vehicle.

From the Hyundai i20 to the Nissan Micra, the Renault Clio, and the Ford Fiesta, an instructor’s vehicle should be safe, compact, and economical. It also shouldn’t cost a lot to service given that many students will use the vehicle over its lifespan.

Driving school includes an instructional and driving component. By learning about driving basics, the teen can pass the DMV written test and obtain their learning permit. With that, they’re free to practice driving until they feel ready for their DMV road test.

Once they pass this second test, the teen can finally obtain their driver’s license and be free to explore the roads. All this starts with a good driving school!