Sometimes you may find yourself in a situation where you're low on oil but don't have any on hand. You're probably wondering how long you can drive without adding new oil. Although that is far from ideal as it poses a risk to your car and eventually your finances.

Driving with low or no oil can lead to engine damage. Because the engine has so many rapidly moving parts, it needs oil to keep it all lubricated and avoid friction. So when that low oil light comes on in your car, get some oil as soon as possible.

The oil is basically the blood of your car. Continue reading to understand what's at risk if you drive with low or no oil. 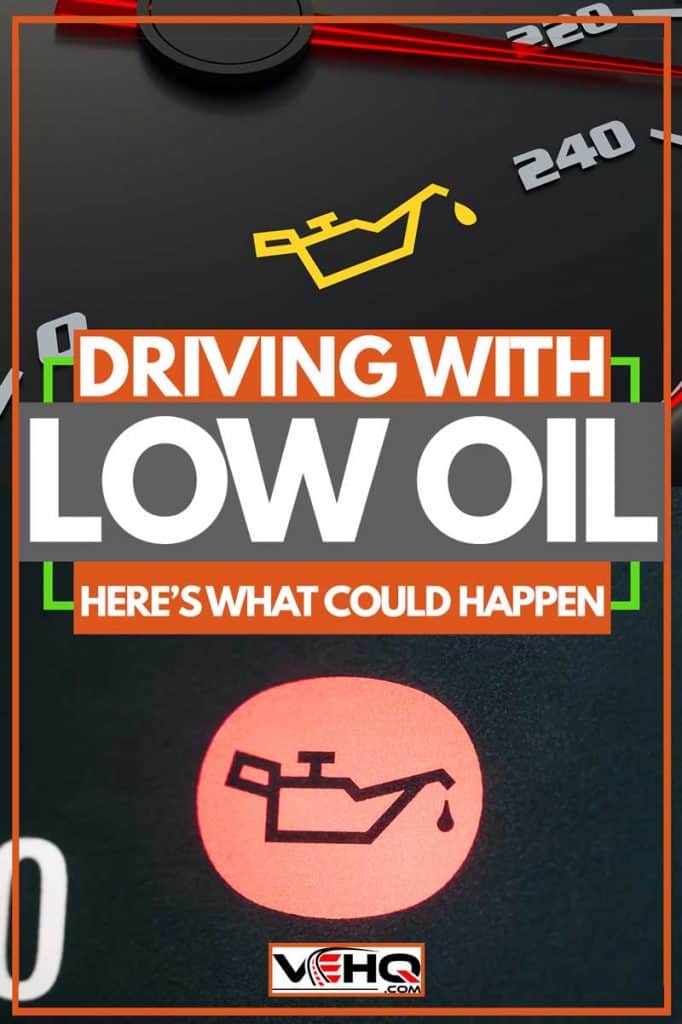 How Long Can an Engine Run Without Oil Before Damage?

We implore you to not even attempt driving a car without any engine oil. As mentioned earlier, the oil is a car's blood; its job is to lubricate all the moving parts ad keep it from overheating.

We stress not running an engine without oil because it will only run from 15 to 20 minutes until the damage becomes extremely costly. Even in less time, damage still occurs. Because there's no lubrication, the rapidly moving metal parts are hitting against each other. Tiny bits of metal scrape off from within the engine. As a result, the engine heats up so much that the antifreeze mechanism won't be enough to cool it down.

Why Is My Car Losing Oil So Fast?

It's very important to understand why your car loses oil so rapidly. The next time you fill up your car with oil, continuously look around to find a cause.

The most common reason behind rapid oil loss is due to a leak. You'll know that there's a leak when you look underneath the vehicle and notice a dark brown or black puddle (aka the motor oil). You will need to look into the issue as soon as possible since oil leaks pose a fire hazard.

Another possible reason is because of an internal engine issue. If the oil is exposed to high heat or the oil seal/gasket is wearing out,  the oil will leak to other parts of the engine. You'll know that this is the case when you notice a burning smell. This is also the case when bluish smoke comes from the tailpipe when accelerating.

Ever thought about electric cars changing oil? Check it out!

Can a Car Lose Oil Without a Leak? 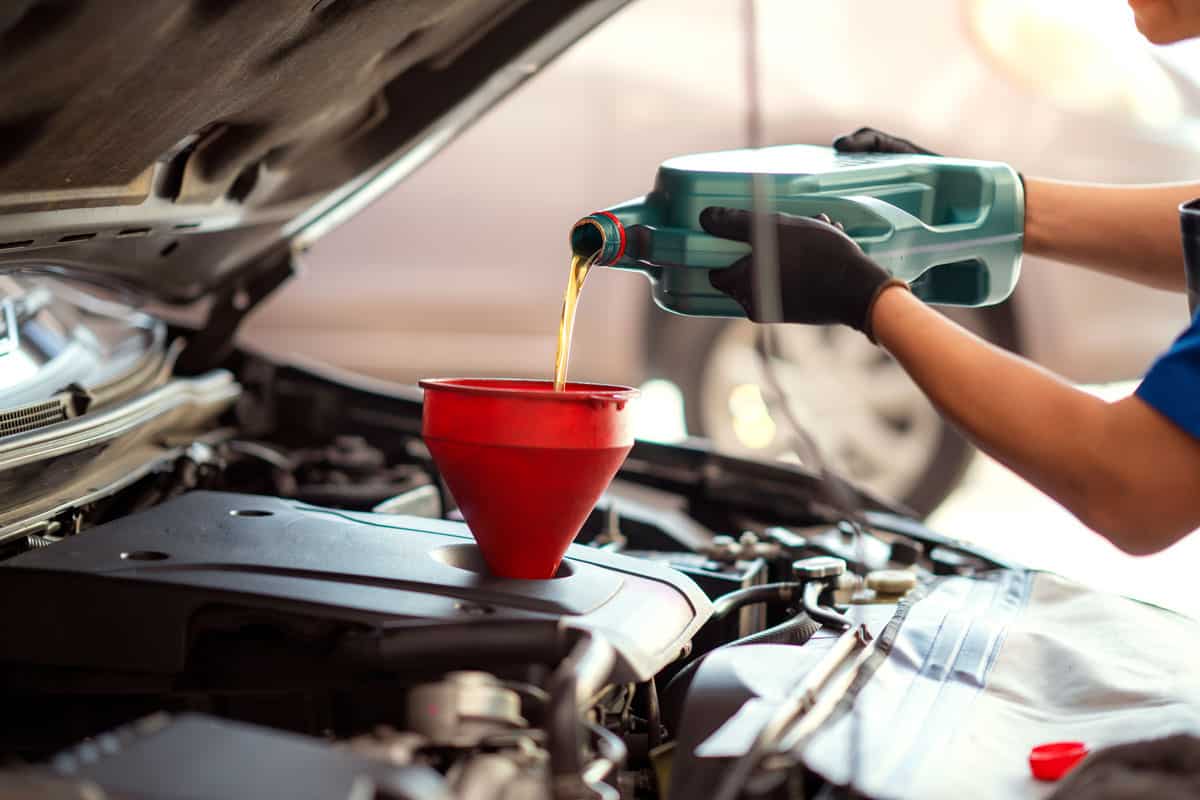 There is a possibility of your car losing oil even without a visible leak. Cars with newer engines generally shouldn't have anything to worry about. Older car engines, however, might not be so lucky. If you're putting in more than a quart of oil in between changes, odds are there's something under the hood you may need to get repaired.

Here are some scenarios where you could lose oil without leaks, what causes it, and what you should do.

How Much Oil Should Be On A Dipstick? 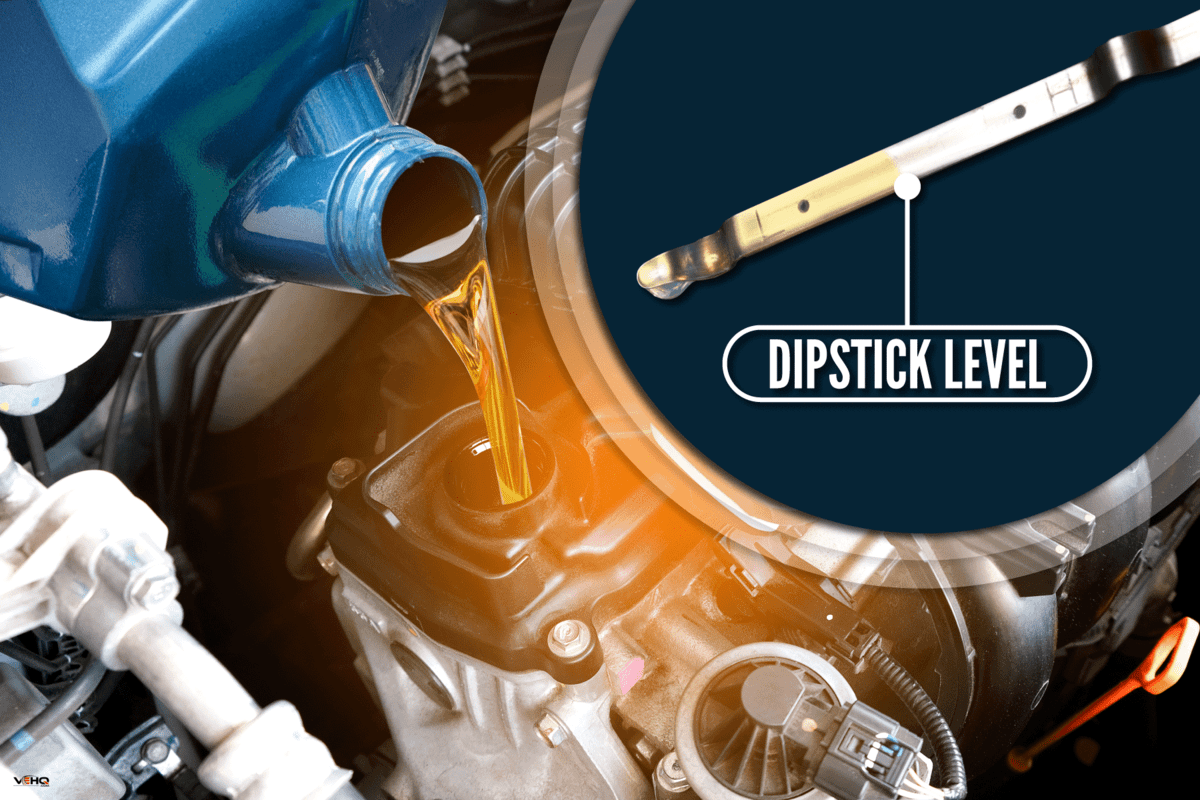 Below, we'll be explaining how to check the amount of oil in your car with the dipstick.

Before checking, gather some disposable gloves, a paper or hand towel, and new oil (if you're adding some in).

What Is An Oil Life Indicator?

An oil life indicator saves you the hassle of figuring out whether you need an oil change or not. It factors in the mileage and the actual quality of the oil itself.

There are two types of indicators depending on the manufacturer: algorithm-based and direct measuring. Algorithm indicators use a complex formula to indicate whether it's fine, needs replacement soon, or immediately needs oil. Direct measuring indicators check for oil conductivity, thickness, and if there's soot or water in the oil.

What Happens When Oil Life is at 0%?

There are no immediate negative impacts of a 0% oil life. When you get notified that it's 0%, it just means you need to get it changed as soon as possible. Until you can go get an oil change appointment, keep driving to an absolute minimum.

Yes, you can drive your car with 5% oil life, but not for long periods. A 5% oil life means the oil has extremely little quality left. Again, keep driving at a bare minimum until you get an oil change.

Will a Car Start If It Has No Oil? 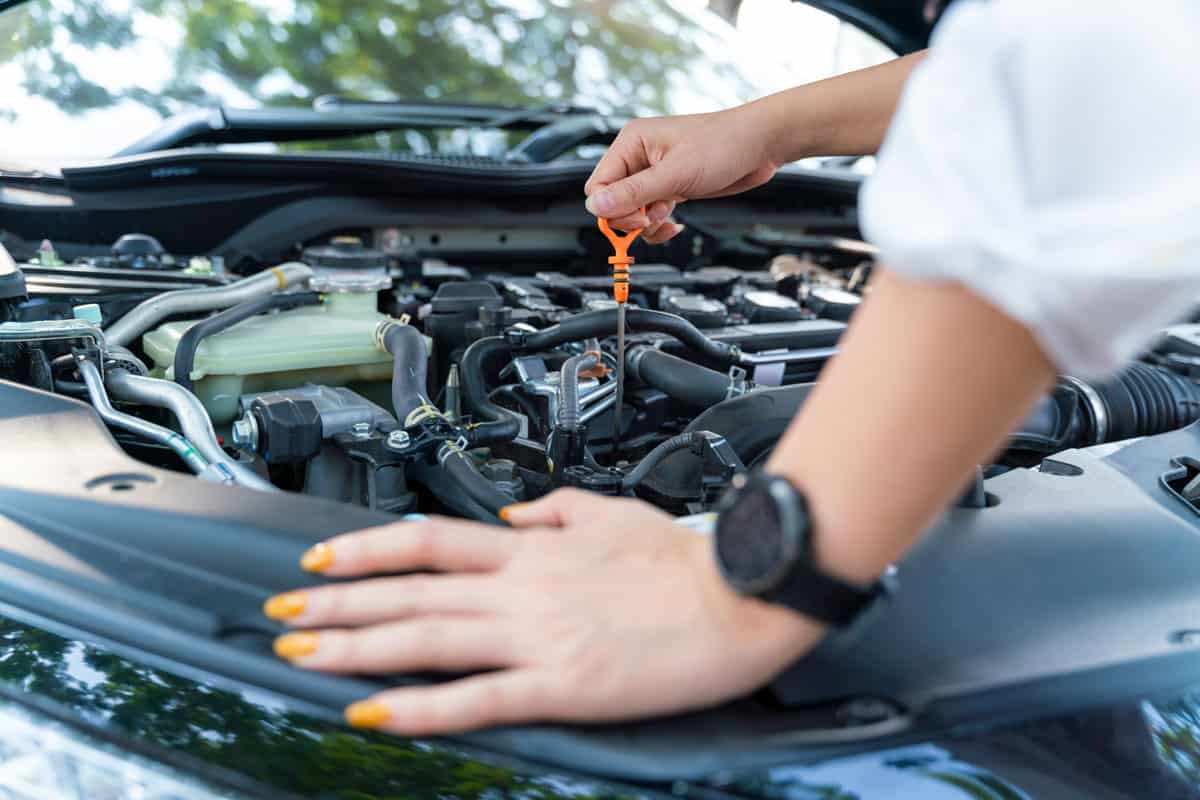 Because engine oil is a lubricant, a lack of it won't have any impact on the engine's ability to start. While you definitely can start your car, the engine won't stay on long.

After a few minutes pass, the engine will heat up due to the lack of lubrication and will seize. At that point, starting up the car any time after that will likely be unsuccessful. The engine will have faced some damage from the lack of oil. That damage will become very costly since the damage is internal and would need disassembling.

Not only does low oil risk engine damage, but it also hinders its optimal performance. The horsepower, fuel economy and other capabilities reach its maximum potential with the proper amount of oil. The less oil in the engine, the less effective it performs.

Another reminder of the importance of engine oil; the engine has to work harder when there's less than recommended oil because there's less lubrication for the engine to run smoothly.

The engine oil and the transmission don't have a relation to each other. Therefore, the amount of oil remaining won't have a direct impact.

That being said, it can have an indirect effect. Since the oil keeps the parts inside cool as they flow, low oil means there's not much to keep the engine cool. If your engine runs hot due to low oil, most transmissions will use its cooling system to help. But that may lead to improper transmission cooling later on, as the cooling system is being used more heavily than it's intended to.

Can I Just Add Oil To My Car? 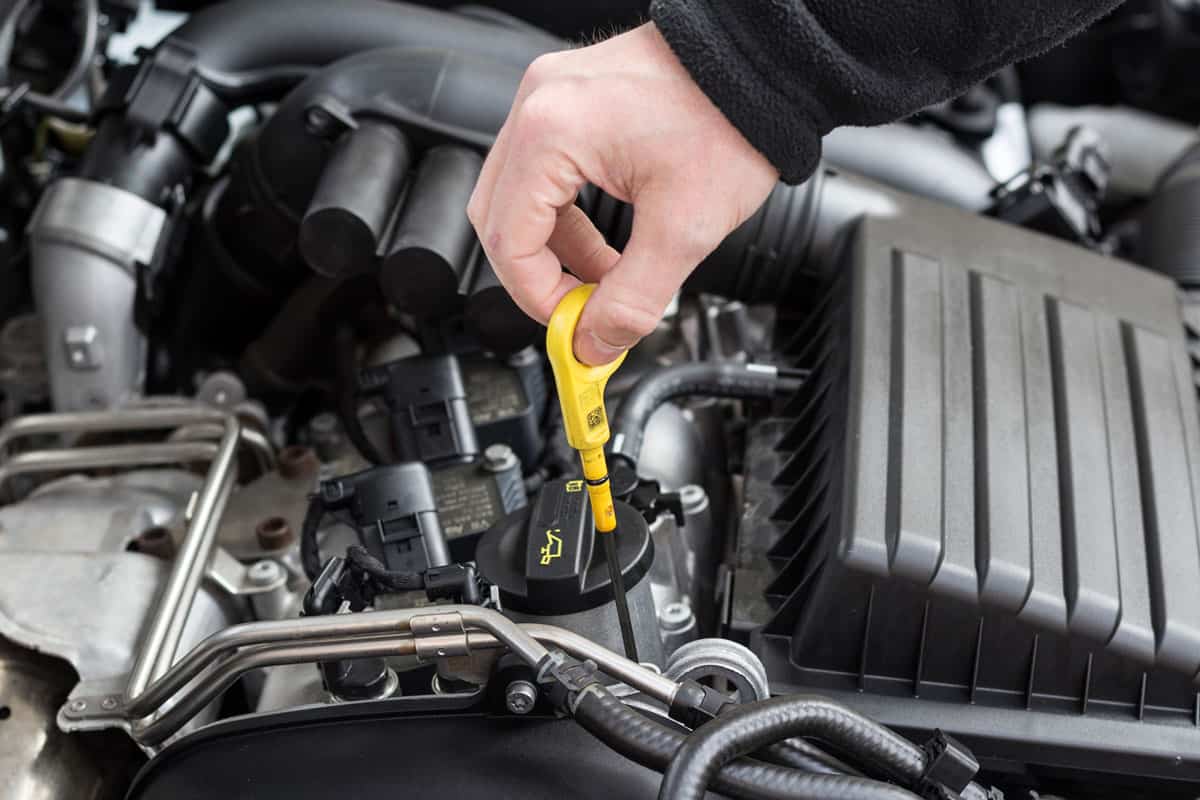 If you simply need to top off your engine oil, yes it's fine to simply add oil. However, don't consider it as a substitute for an oil change as the old oil is still present.

Before adding oil to your car, make sure that it's turned off and it sits for five to ten minutes. It is a huge safety hazard to add oil to a vehicle while it's still running; multiple belts and fans are running and spinning when it's on.

How Much Oil Should I Put In My Car When Low?

After your car has been off for a few minutes, check the amount of oil remaining in the engine using the instructions mentioned earlier. Keep adding oil until you see the oil sit in between the two markers on the dipstick. Preferably, try to fill it to the top marker so you don't have to refill it again too soon.

Is It Bad To Mix Old And New Oil?

Mixing new and used oil won't do you any harm. It also won't cause a risk of needing an oil change sooner. We highly recommend that you use the oil that your owner's manual says to put in the engine.

There won't be much harm done in mixing different oils either, but the engine may not perform at its best with a different oil. If you have to buy and use an oil cheaper than the one your car takes, do so but keep that caution in mind when doing so.

What's the Difference Between Normal and Synthetic Oil?

The conventional motor oil is the cheaper of the two. It serves the basic job for your engine: providing lubrication, preventing corrosion, and keeping it cool.

Synthetic oil does the same thing, but with a specially blended formula. These oils get the job done in more harsh situations, such as when your car carries heavy loads or drives in intense conditions. Most newer cars today require synthetic oil in their engines. Synthetic oil is the more expensive oil, but it provides superior performance compared to regular oil. If your car is newer, has high mileage, or runs hot, purchase this kind of oil.

Does the Engine Have to be Cool to Add Oil?

Can You Put Too Much Oil In A Car?

Overfilling the oil in your car seems like a good idea to avoid filling it up often, but that's actually very damaging. Too much oil leaves some of it to become foamy and/or overheated. The foaminess could potentially stop the flow of oil in the engine.

If there's too much oil in the car, drain the oil. To do this, place a bucket underneath the oil plug, slightly unscrew it, and let enough oil trickle out.

What Happens if you Don't Change the Oil? 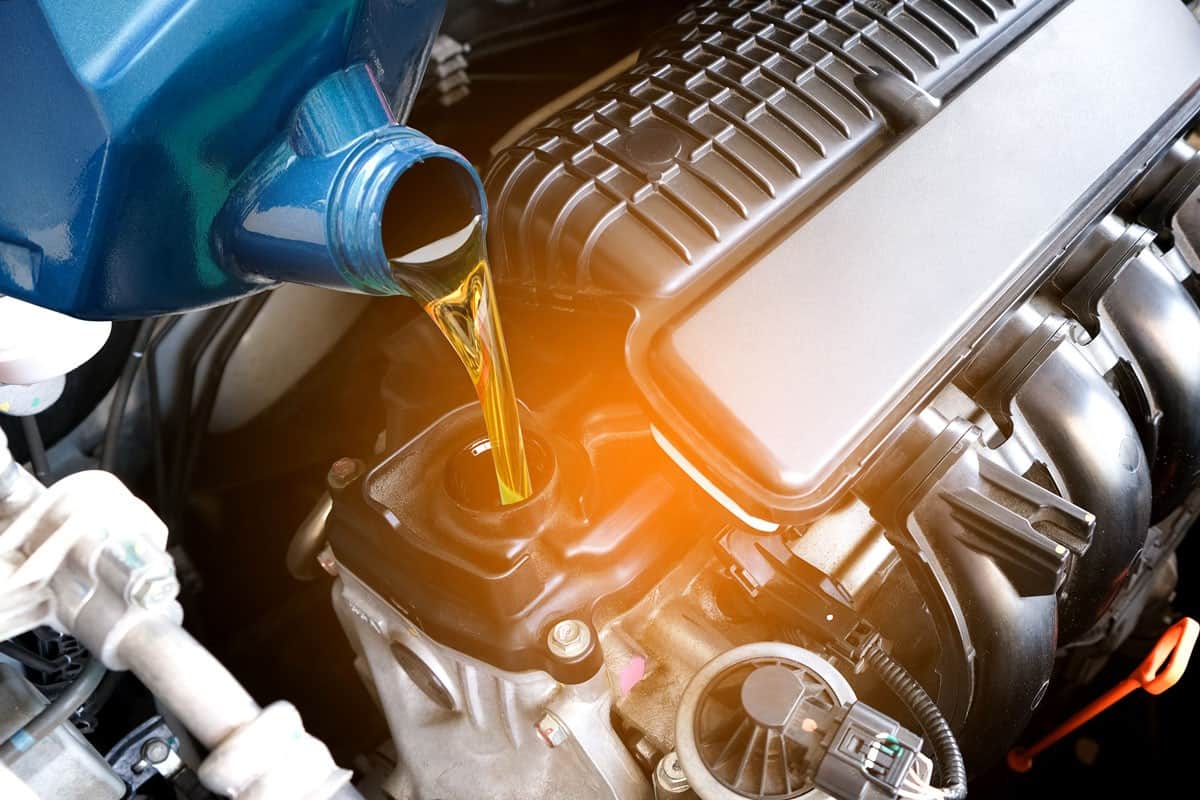 Continuously pushing off an oil change will have costly consequences. Assuming you bought your car new, not servicing your car could void your warranty. The longer time passes, the likelier the oil will turn to sludge; at that point, your engine has to work excessively harder to run, costing you more gas. Additionally, that sludge can't cool down the engine, risking overheating problems.

If you went 10,000 miles without an oil change, there's a high chance something is wrong under the hood. The sludge that would have built up over that time may also contain particle buildup that can cause corrosion. Additionally, there's the risk that whatever particles didn't buildup in the oil ended up in other major parts of the engine.

Is It Bad To Drive Without An Oil Cap?

One of the most common things drivers forget to put back on is the oil cap. Doing this can possibly be damaging. Without the cap, there's exposure for more debris to get inside the oil. Oil could also spill out while driving without the cap. These can prove costly with engine cleanings or purchasing oil more frequently.

Wondering about other leakages that might happen to your car ? Check below -

Evaporative Emission System (EVAP) leak detected? What to do?

Is your car leaking gas?

Thank you for saying it is best to not ever drive your car without oil. My car's oil change light came on yesterday. I will find a great oil change center locally.

Oil is one of the most vital fluids your car needs, if not the most important. It is your car's lifeblood and helps keep your car running in prime condition. Running on low oil and using low quality oil might cause damage to your engine since there would be more friction going on as it runs. I learned from Dig My Ride that fully synthetic oil blends is the way to go since it contains less impurities compared to traditional oil. It might cost a little more but it definitely gives more benefits in the long run.