You hear a squealing noise coming from under the hood of your car. You check the belt, and it seems to be fine. What else could be going on? We reached out to the experts, and here's what they said:

Squealing sounds can be caused by a number of factors. If it's not the belt, then it's most likely a worn pulley or loose alternator. In most cases, you will need to replace the pulley or the alternator in order to stop the noise.

Engine squealing is one of the most annoying sounds you will hear from a vehicle. The noise can be caused by a number of different things. Read on to learn how to identify the noise, what might be causing it, and how you can fix the issue. 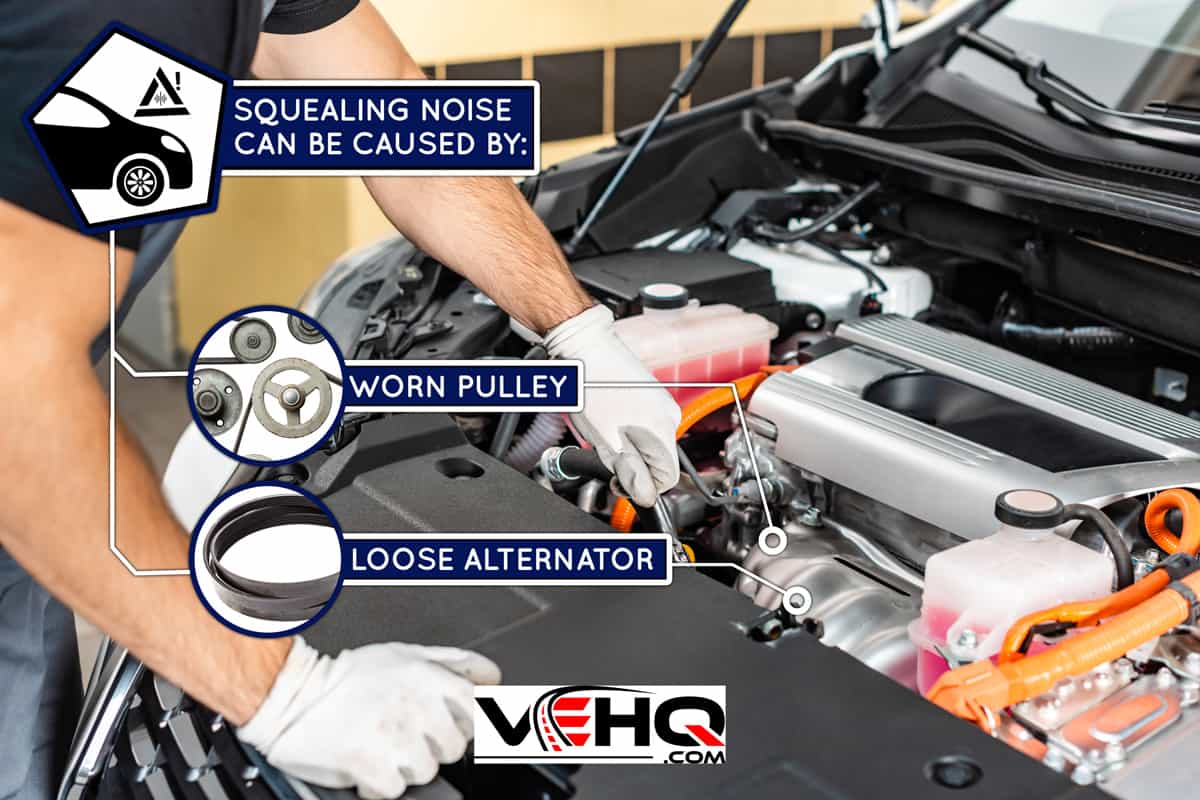 What Does A Squealing Noise Under The Hood Mean?

More often than not, a loose or worn serpentine belt can create a high-pitched squeal. It is the sound of the belt breaking. A serpentine belt should be replaced if it has become too loose or frayed.

A serpentine belt drives the engine's pulleys and connects them. It is responsible for powering your car's major systems, such as the alternator, power steering pump, tensioner, water pump, crankshaft pulley, and idler pulleys.

If after replacing the serpentine belt the noise still persists, your vehicle may be experiencing a problem with any of its engine accessories. 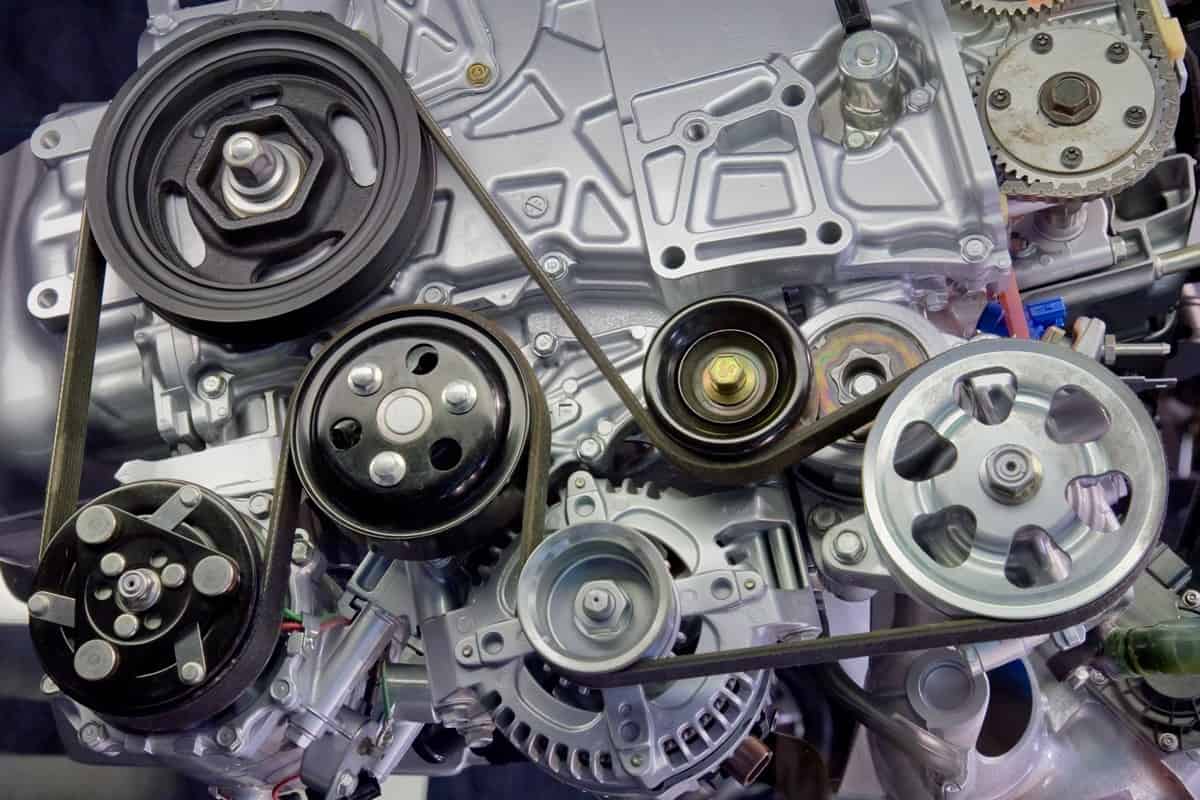 Engine Accessories That Make A Squealing Noise When Worn Or Damaged

An engine accessory is anything that is attached to the engine of a car. It can be something like an alternator, power steering pump, tensioner, water pump, crankshaft pulley, idler pulleys, and so on.

We'll learn about each of these engine accessories in detail in this article, along with their purpose and how they are connected to the engine.

An alternator converts the energy generated by the internal combustion engine of your vehicle into electricity.

The power of this converted electricity is sufficient to operate the electrical systems of your vehicle such as the air conditioning, lights, radio, power steering, and various other features.

Additionally, the alternator converts the mechanical energy stored in the rotating flywheel of an internal combustion engine into electrical energy for charging the battery in your vehicle.

Alternator bearings are one of the essential moving parts in an alternator. They allow the rotor to turn inside the stator and are the main reason why your alternator makes a loud squealing noise if they are worn out.

The hydraulic fluid is generated by a pump and then sent to the cylinders that are used to turn the wheels.

The power steering pump is responsible for pumping the fluid used to assist in turning the vehicle wheels. It's designed to maintain the proper pressure, which is usually between 1,100-1,300 psi.

Additionally, you can check your car's manual for the recommended system operating pressure for your specific unit.

A worn or damaged power steering pump may not provide sufficient pressure to operate your vehicle's power steering system. If the system is unable to produce the proper pressure, the pump will fail to turn the vehicle wheels, resulting in a squealing noise. 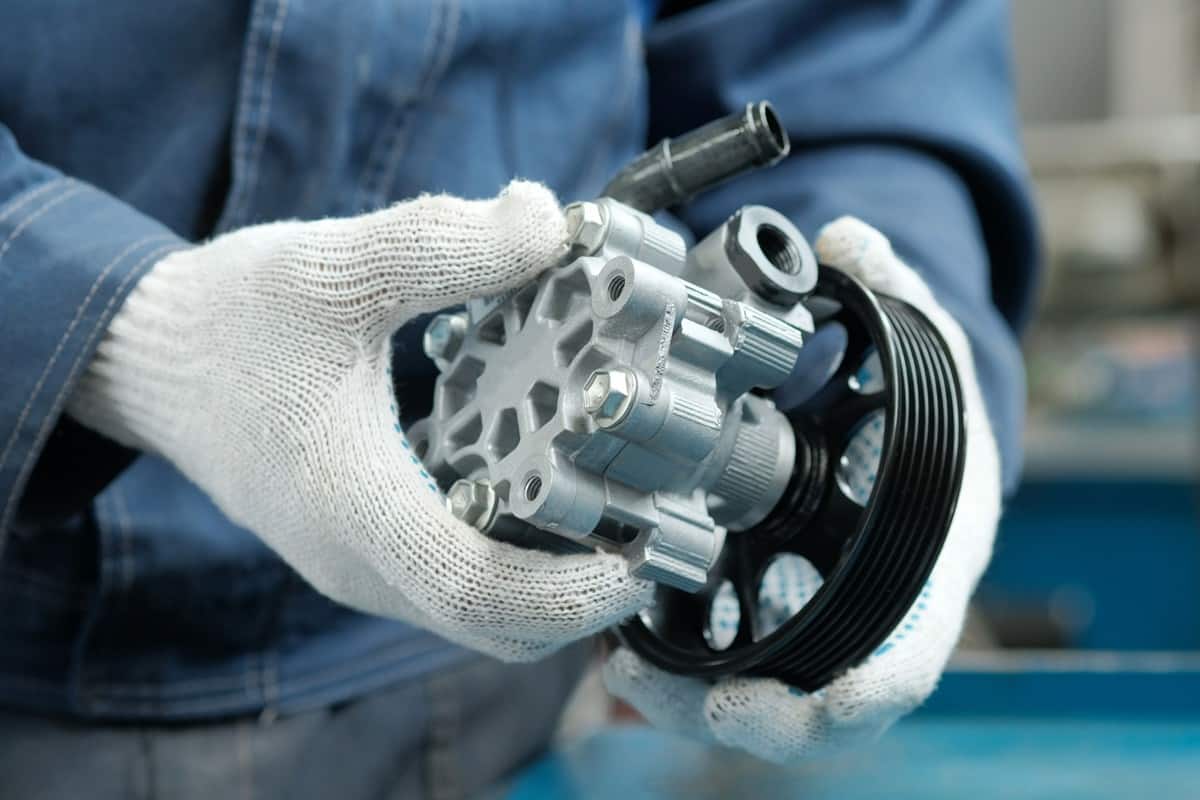 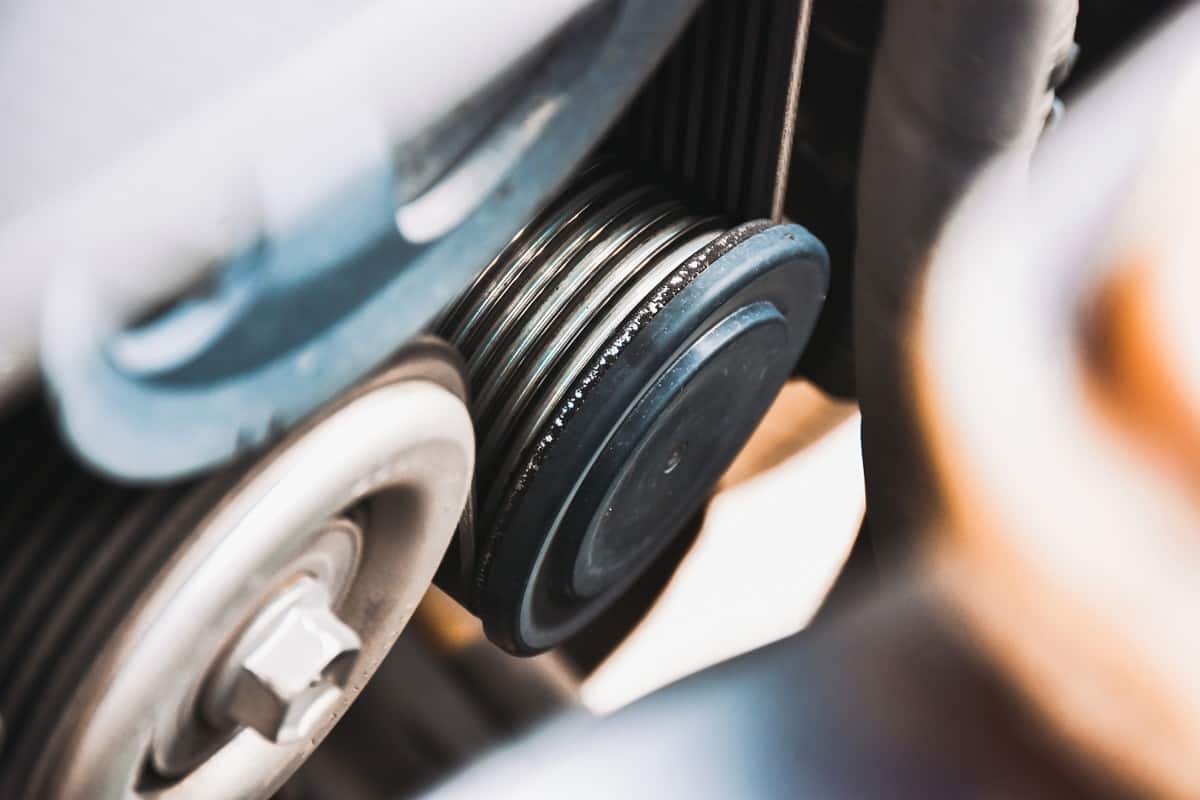 A tensioner is a part of your car’s engine that keeps the belt tight at all times. This part keeps your engine running smoothly and prevents the belt from slipping. Without tensioners, the engine belt may stretch and break down prematurely.

This can cause the engine to stall, and the car to lose power or become uncontrollable.

Although most modern engines are equipped with an automatic tensioner, you can also find older cars with tensioners that need manual adjustment as part of their regular check-ups.

What’s the difference between a tensioner and a pulley?

A tensioner is a metal piece that clamps onto the belt and prevents it from slipping. A pulley is a large metal wheel that wraps around the belt and rotates as it pulls the belt across it.

How can I tell if my tensioner is broken?

As a mechanical part, tensioners can fail. They have moving parts that wear out. The bearings of the tensioner may get loose over time. This causes the tensioner to lose its grip on the belt, which can cause your engine to stall and eventually stop.

You may hear a rattle or feel the belt moving across the pulley. If you see a belt or pulley that is loose, your tensioner is likely broken.

Tensioners are cheap and easy to install and replace. Make sure to have a reliable and experienced technician service your vehicle so that he can identify and fix any potential tensioner problems. 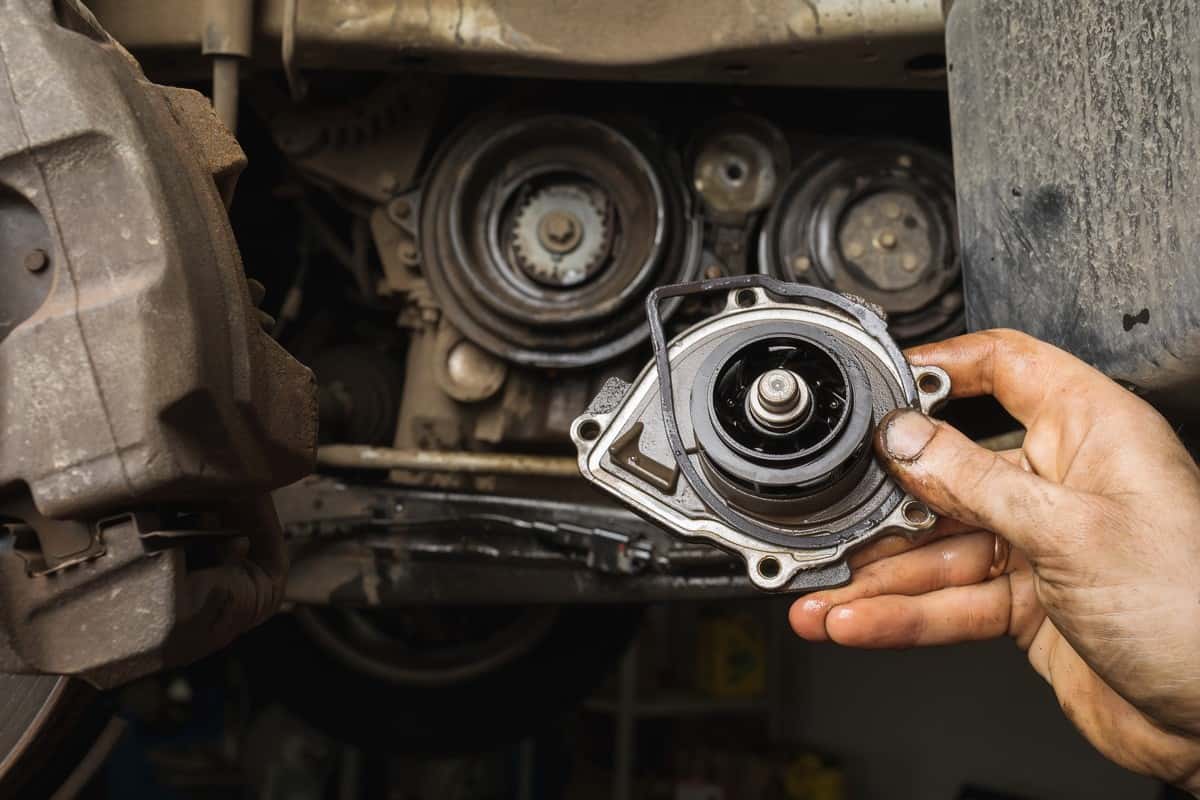 The water pump pulls coolant from the radiator and sends it to the engine block where heat is dissipated. It helps maintain the ideal operating temperatures of your car's engine so it won't overheat.

It is driven by the engine through a pulley system and is typically mounted under the hood on the front of the engine.

If your car's water pump is making a high-pitched, squealing noise when you accelerate, it means that it's about to fail.

Here are the steps to take if you suspect that you have a faulty water pump.

Watch the video below on how to diagnose a squealing noise from under the hood:

There are different pulleys designed for different functions within a car’s engine, but the crankshaft pulley is one of the most important ones.

It is responsible for sending out power from the crankshaft to the rest of the car's components that are not directly involved in the transmission and acceleration of the car, such as air conditioning and headlights.

A faulty crankshaft pulley will result in an increased squealing noise in the engine and decreased engine performance. The vehicle's ignition system may also become inoperative.

How do I know when to change the crankshaft pulley? 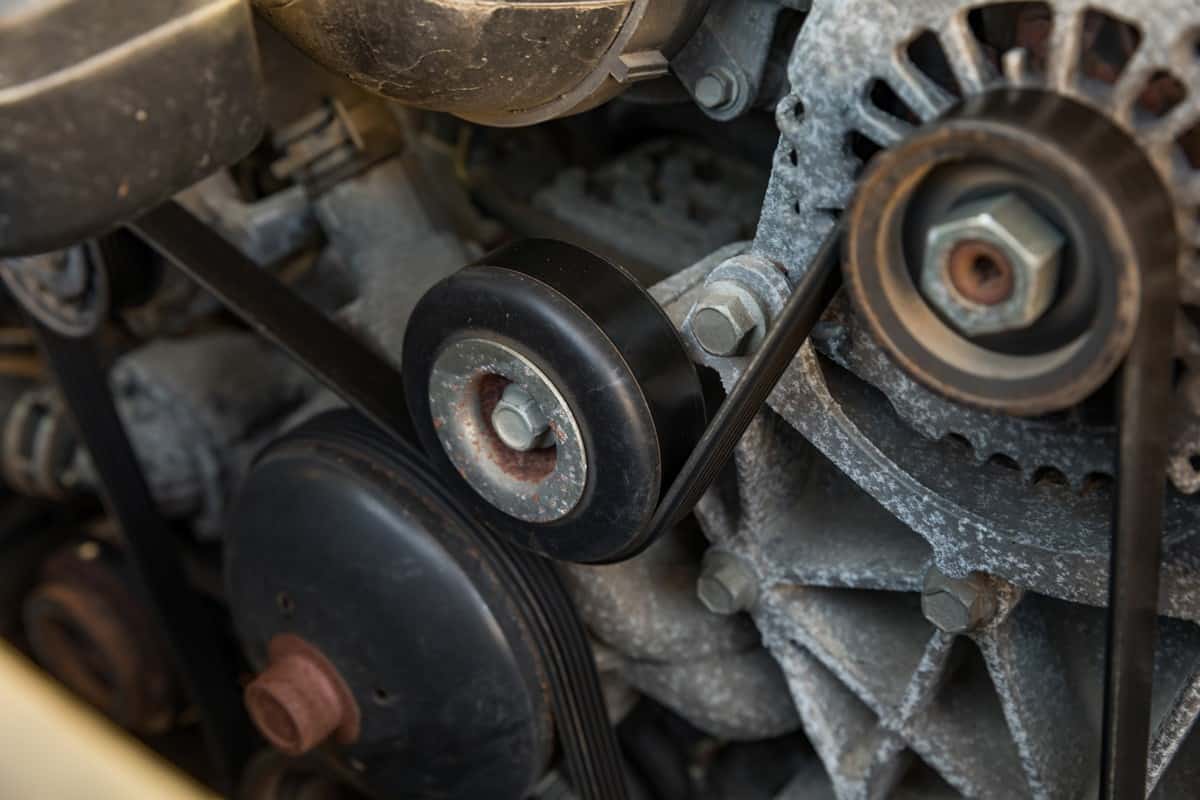 An idler pulley is a type of pulley used to change the direction or orientation of power that is transferred from one shaft to another. It is commonly found in mechanisms that utilize shafts to transfer rotational motion.

The main benefit of using an idler pulley is to provide flexibility in your pulley system. For example, if you want to change the speed ratio between the drive and driven pulleys without having to replace any belts or pulleys, this is possible.

In addition, the idler pulley is used to provide a different amount of torque to the shaft at different speeds.

If you look at a pulley system, you'll notice that most pulley systems are geared down to some degree. That's because they want more torque at low speeds and less torque at high speeds.

A broken idler pulley will continue to rotate and move the belt, but the belt will not rotate with it. This is because the belt tension is loosened.

The result is that the pulleys may slip over each other, causing damage to the bearings and pulleys, and possibly jamming the belt in the machine. You will also hear a squealing noise from under the hood.

A mechanic's stethoscope can be helpful when you're trying to diagnose engine squealing. This way, you can share your diagnosis with a trusted mechanic and discuss possible options.

Check out this automotive stethoscope on Amazon

Engine squealing that's not caused by the belt is often the result of a damaged pulley or loose alternator. The squealing may seem like an easy fix, but sometimes the problem can be much more complex. However, this should not prevent you from being able to diagnose the issue.

Car Gas Tank Making Noise; What Could Be Wrong?

Hissing Noise From Car Brakes—What Could Be Wrong?