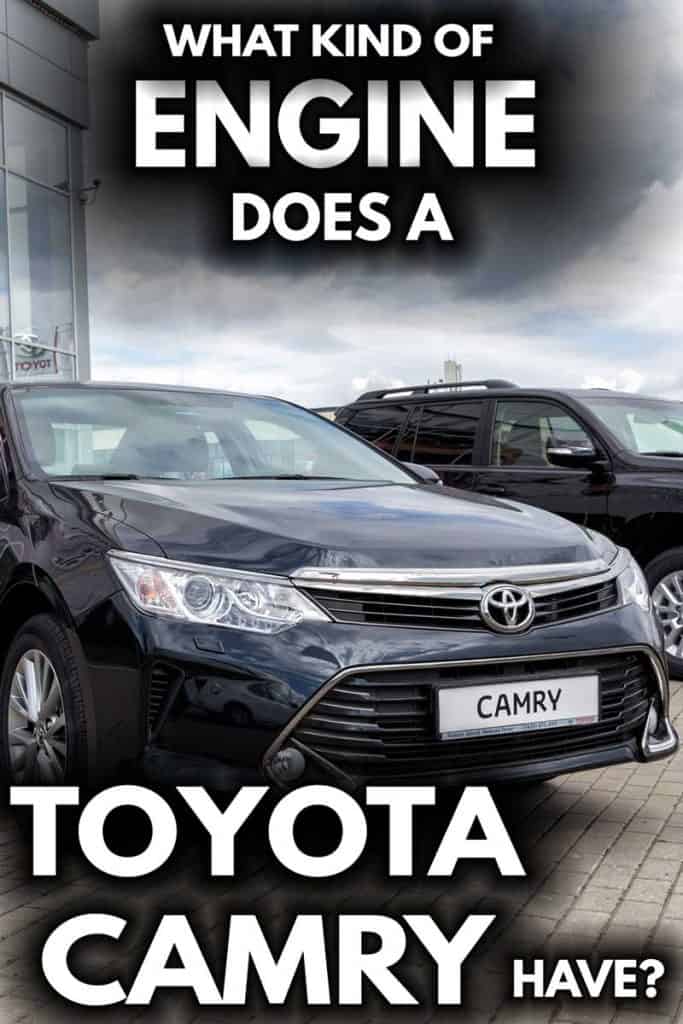 Are you are seeking to buy a Camry and want to know which engine they come with? Or perhaps, you are an automobile enthusiast and want to ascertain the differences and similarities in the performance or reliability of Camry engines. Well, you have made the right stop. Through our research, we have come up with the answers to your query.

The Camry series has been one of the most popular automobiles by Toyota since its first release in the 1980's. Spanning twelve generations, there have been several different Camry engines. The 2019 Camry TRD comes with three kinds of engine namely; the 2.5L four-cylinder (203HP) engine, the 3.5L V6 (301HP) engine, and the 2.5L four-cylinder (176HP) with Toyota Hybrid System II engine. The 2018 Camry also comes with the first two of the aforementioned engines and the additional 2.5L four-cylinder (208HP) with THSII engine. The other earlier Camrys, ranging from the 2015 version to the first generation, comes with different kinds of engines.

We understand if the above information is confusing. This is why you should read further to get a total breakdown of the answer.

Considering the long history of the Camry, we have broken down each generation so you can see what engines are available in what models.

Coming as a new model at the time, this Camry has an all-wheel-drive system with a manual-transmission while new engines were only made available as options. Its first model was the 2.5L V6 engine that can produce over 160HP; the other engine options are 1.8L and the 2.0L four-cylinder engines, producing 90HP and 128HP respectively.

When this Camry was introduced in 2003, it was set to mark the beginning of the second generation of automobiles with a different design than the known model of the Camry. With some of its components borrowed from the Lexus, the Solara has a 2.4L engine (157HP) while the other has a 3.3L 6-cylinder with a 5-speed automatic transmission as installed on the sedan, charging up over 225HP.

First introduced in 2007 into the Japanese market, it was available in multiple engine versions. One is a 2.4L VVTi 5MT, a four-cylinder engine that assures 158HP. The other is a 3.5L V6 6-speed AT engine with a horsepower of over 268HP.

Debuted in 2009 at the North American International Auto Show, the Camry Hybrid shared much quality with the Toyota Camry Japan. It was fitted with a dynamic 2.4L four-cylinder Hybrid CVT engine that assured 147HP at 6000 RPM.

Debuted in 2011, it was introduced as the seventh-generation Camry; bold, advanced with improved driving dynamics and an even quieter engine. Praised as “the best Camry ever made” with a leading class in fuel economy and multimedia add-ons, the Camry engine performs through one of the two available engines. One is a 2.5L four-cylinder engine with 178HP. The other is a mighty 3.5L 6-speed Automatic transmission engine that powers up to 268HP.

Released in 2014, this Camry edition used the hybrid system to operate in one of the engines. This Toyota Camry is powered by a 2.5L four-cylinder gasoline engine with a 6-speed automatic transmission that can output over 178HP at a fuel-economic rate. Also, in the gasoline engine category, is the 3.5L V6 engine that powers up to 268HP. The hybrid engine 2.5L ECVT could deliver over 200HP.

Featuring Toyota’s latest Human Machine Interface (HMI), the 2018 Camry edition engine was fused with new transmission and design. It runs on one of three available engines (two gasoline engines and one hybrid). A 2.5L Dynamic four-cylinder 8AT (8-speed Automatic Transmission) engine that can deliver over 203HP, a  3.5L V6 engine with 301HP and a 2.5L four-cylinder eCVT engine featuring a hybrid system (THS II) - it delivers an output of 208HP.

The latest Camry has many amazing engines feature. It performs this through three available engines (one of which is a hybrid system). One is a fuel-efficient 2.5L four-cylinder (I4) engine delivering over 203HP. Another engine on the Camry TRD is a punchy 3.5L V6 engine delivering over 301HP. Lastly is a 2.5L four-cylinder (I4) engine boasting a Toyota’s Hybrid System II (THS II) which delivers groovy efficiency as well as a great power with an output of 176HP.

Toyota Camry has coursed through remarkable turn-around over the years with their engines coming in one of either the four-cylinder or the six-cylinder, or with a hybrid drive train with some level of efficiency and some fun drive.

Is There A 6 Cylinder Toyota Camry?

Knowing that the four-cylinder is two pistons less than the six-cylinder driving the power of your Camry engine, the easy answer for reliability would be the most powerful. However, this is not the case. The reliability of either of the engines is largely determined by the demands and maintenance of the vehicle. That is, a Camry with a four-cylinder engine is quite reliable given its excellent fuel economy but is not suitable for heavy loads or extra passengers. While a 6-cylinder engine will be most reliable for a long-distance traveler, or hauling of somewhat heavy loads such as towing boats, campers, etc. yet it is not fuel-friendly and can be costly in maintenance.

What is the Difference Between a V6 or 4 Cylinder Toyota Camry?

The most noticeable difference between the V6 and the 4-cylinder engine is the power output. That is, a V6 engine can present additional power up when needed, given the condition of your need, usage, and environment. Another is the arrangement of the cylinders, a V6 engine’s cylinders are lined up in a V-shape, while the 4-cylinder engine is lined up on a straight line.

The V6 engine is a little on the luxury end, this is because it costs somewhat more getting a Camry with one than getting same with a 4-cylinder engine. Again, V6 is less in the area of fuel economy, Toyota Camry with four-cylinder engines have very impressive fuel economy and could be integrated with the Toyota Hybrid System (THS). This, however, does not mean one is better than the other as the line between them is blurrier now that engines are configured to be better and efficiently more powerful. Knowing the difference would allow you to choose which best fit your taste.

How Do I Maintain My Toyota Camry Engine

Regardless of the kind of engine you use, it will not be reliable if they are not well maintained. The best ways to maintain your Camry engine are;

Some of the products that can help your Camry engine last long are;

This air filter suitable for all Camrys within the year 2007 - 2017 will help your engine stay clean from dirt that could affect its efficiency.

This product will filter out harmful substances in your motor oil from entering your engine.

Always stay prepared by having this pack of engine plug on you.

An Engine Type for Every Driver

Regardless of what you are looking for in a sedan, you can be certain that there is a Camry that will meet all of your needs engine-wise. And with such a stellar reputation for reliability, you can be assured that whatever your choice, it will last you for years with proper care and maintenance!

Impressive I love that any well