You've just had a new radio installed on your F150, but when you try to start the truck, it won't. You think the problem might be related to the installation process, but you're not sure where to begin. We gathered all the information needed to help you out.

If your F150 doesn't turn over after the new radio is installed, it’s likely that your battery is low. You can try uninstalling the new radio and see if the truck starts up with no issues. You can also try other batteries if you have some spare and see if this solves the problem.

If you're having issues with your F150 starting, we'll give you the information you need to know to get it going. Read on to learn how to check your F150 battery with a multimeter the right way and when you should replace it. 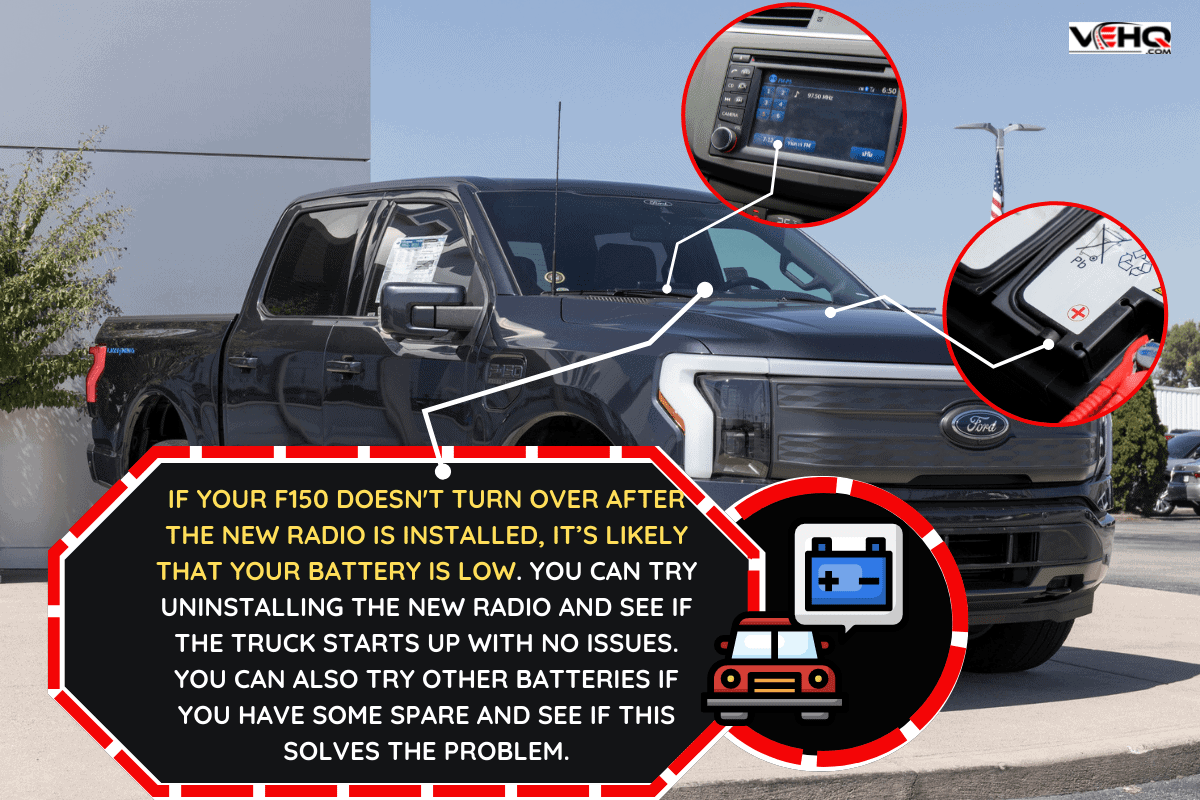 The Importance Of Checking Battery Before Installing New F150 Radio

If you are planning to install a new radio in your F150, you should check the battery before doing it. The reason is that the battery is one of the most important components of your F150, and its failure can cause your truck not to turn over. 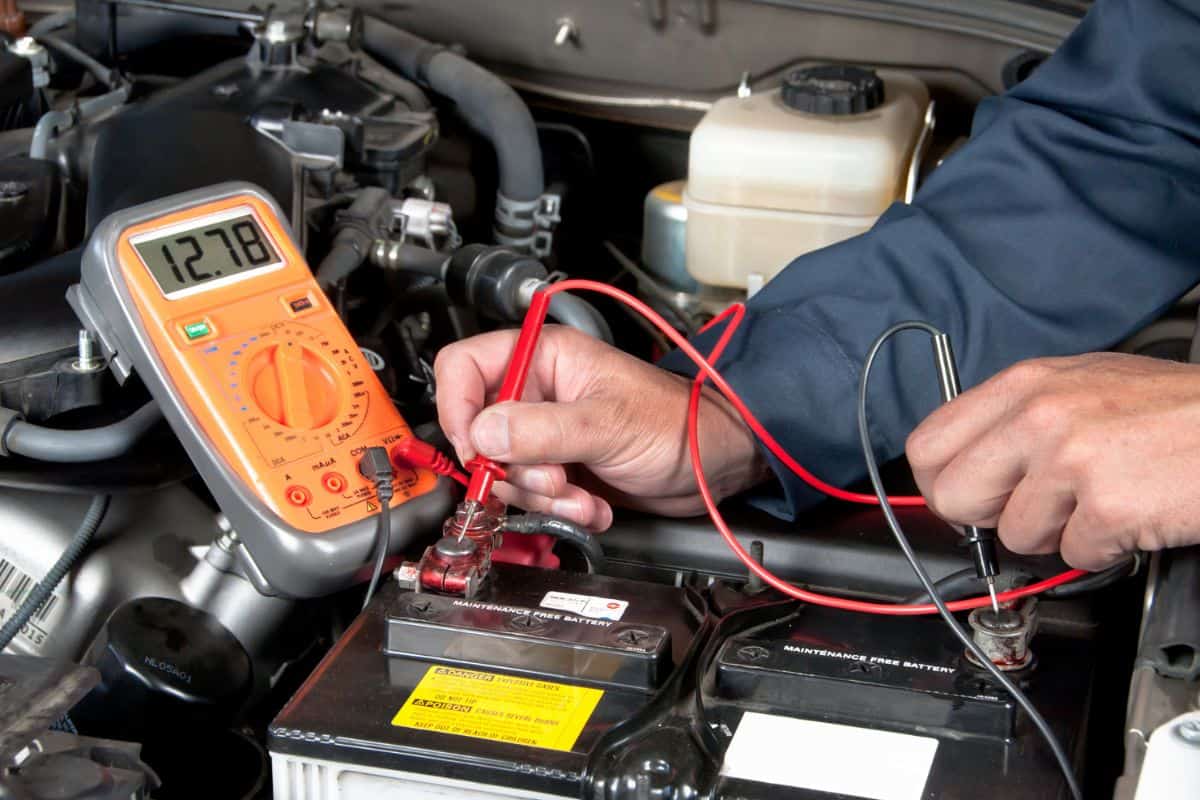 Your F150 battery converts chemical energy into electrical energy. The energy produced by the battery is used to turn your starter motor to crank your engine, turn your lights, and run your radio and other accessories.

Once the F150 is started, the battery begins delivering the stored power to the starter motor, which starts the engine. The process of recharging the battery is done using the alternator. Once the alternator is working, it will recharge the battery.

However, the battery may lose its ability to hold a charge if the battery has been discharged to a low level for an extended period of time or due to old age.

As time passes, the battery will begin to lose its charge. The longer you drive without changing your F150 battery, the more it will lose its power.

How To Tell If Your F150 Battery Is Low? [Telltale Signs]

Most people know that their car or truck battery can go dead over time, but not everyone is aware of the telltale signs that something is wrong.

An F150 battery can last anywhere from 3 to 5 years if it's properly cared for. When an F150 battery starts to lose its charge, you'll start noticing warning signs. Here are some of them:

1. Clicking Noise When Turning Ignition On

Your battery is the one that sends an electrical current through the spark plugs to the starter solenoid in order to initiate combustion.

When the battery is weak, it'll no longer send a sufficient amount of current to the starter solenoid. This results in a weak or intermittent ignition which causes the clicking sound when turning the key.

Crank delay is the delay between the time the electrical current supplied by the battery reaches the starter solenoid and the time the engine starts turning over. It’s very common on the first try at starting the engine.

If you are experiencing slow cranking, you should check the voltage of the battery and look at how well it is holding up. Crank delays can cause low compression. It's important not to take low compression lightly as it is a serious problem if not diagnosed and treated early. 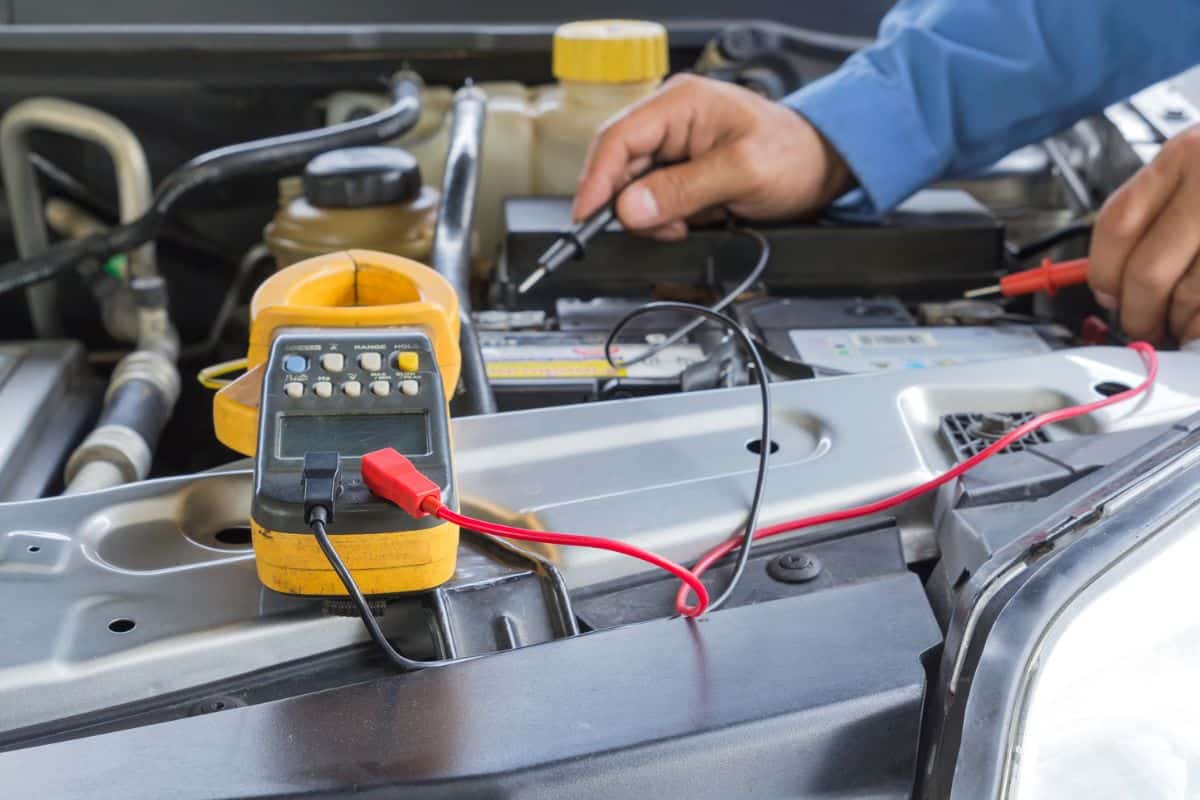 3. The Need To Put Some Gas To Start

According to Matt Pericles, a Quora member with 25 years of experience in sports car racing, you're not supposed to press the gas pedal when starting a fuel-injected car or truck.

The F150 has its own ECU that controls the air-to-fuel mixture to get your truck up and running all by itself. The ECU is powered by your F150 battery, so if you can only make your truck turn over by pressing the gas pedal then you may have a failing battery.

For some additional reading. on the topic, we've thoroughly covered the relationship between the ECU and a car battery.

When an F150 battery fails, it can result in disruption in the F150's combustion process as well. A bad battery can cause an unstable electrical discharge that creates a series of sparks within the combustion chamber.

These intermittent sparks ignite the gas mixture that leads to the release of a fluctuating amount of energy, causing successive small explosions called backfires. 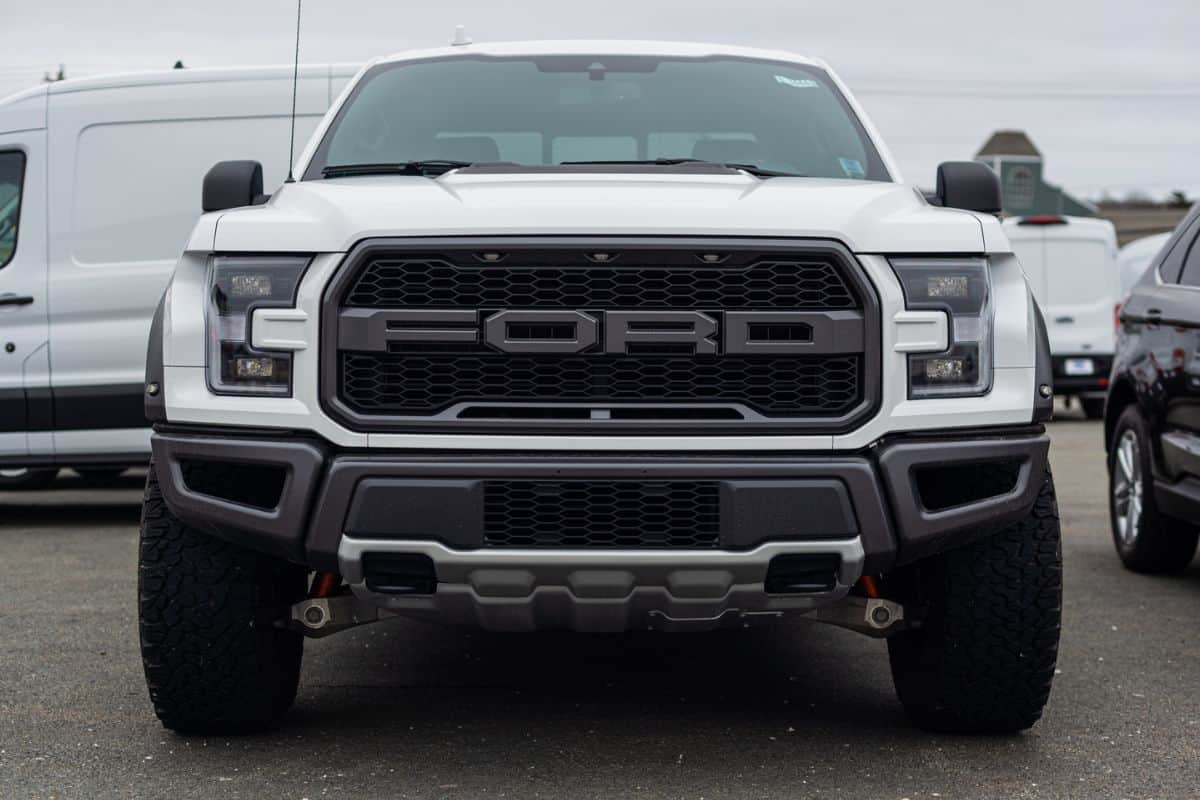 When your F150 headlights start to dim, you may wonder if the problem lies in the bulbs themselves, the electrical connections, or the battery itself.

It is possible that the problem is with the battery, especially if the issue happened only after installing the new stereo. In this case, the battery itself may need replacing, or it could be due to a weak connection between the negative and positive terminals.

How To Check F150 Battery

Multimeters have long been a staple for electronic junkies who enjoy doing things one step at a time. They’re also extremely useful for checking various voltages, measuring resistance, measuring continuity, and measuring amperage.

Checking truck batteries is no exception. Although the basic idea is pretty simple, a multimeter is actually one of the most useful tools you can have. Here’s how to check your F150 battery.

1. Look For A Multimeter

First, find a multimeter. This can be as simple as taking a look around your local electronics store or buying one online. Most multimeters will work well enough for truck batteries, but you may want to go for one with a wider range of testing options.

Stabilizing small voltages in trucks can help you avoid false readings on the digital display. Incorrect readings could lead to a false assumption about a potential problem, and you don't want that.

To help ensure that your diagnostic tools provide accurate readings, follow these steps:

Let The Engine Rest For A While

Allowing the engine to rest for a few minutes before taking a reading ensures a more accurate number on the digital display. 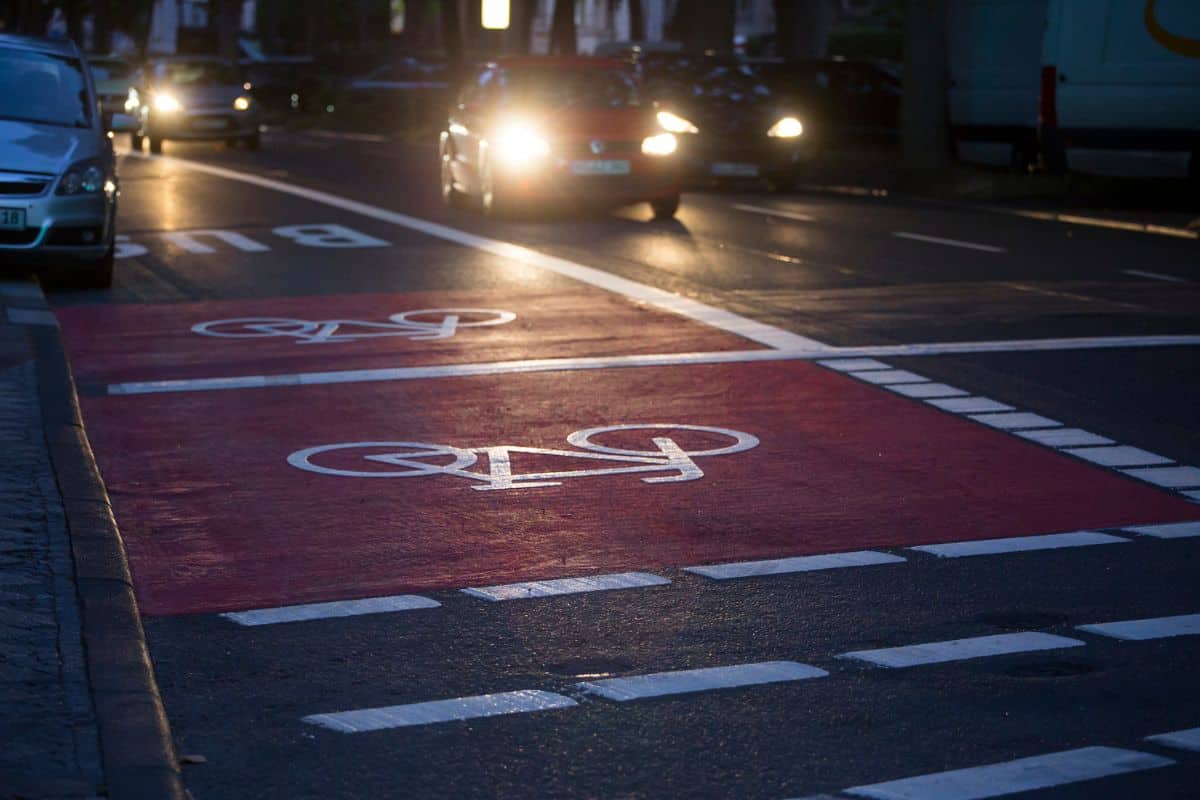 Some people think they're losing electricity from their vehicle when they turn their truck lights on and off. They may be right but only in the sense that they're losing a tiny amount of charge.

The moment you shut off the lights, the bulb goes into a state of negative charge and is no longer charged. The current then stops flowing, and the bulb runs out of electricity.

If you turn the headlights off after turning them on for about half a minute, the battery has enough time to discharge the bulbs, which causes a small amount of voltage to be unloaded.

3. Set The Multimeter To Its Ideal Scope Of Measurement

Since the multimeter is designed to measure the voltage, it has a specific range that it will operate within. Therefore, it is vital to know what scope of measurement the multimeter has before making any measurements.

If you measure outside the specified range, you will likely get inaccurate results. However, there is a simple trick to getting around this problem. You just need to ensure that you place the multimeter in the ideal range. For your F150, the ideal range is 20V.

Once you have your multimeter's selector adjusted to 20V, you can now connect it to your F150 battery. You can take the measurement straight away as long as the engine is off and has been rested for a few minutes.

The video below shows how to replace your F150 battery:

After checking the battery voltage, the multimeter probes stay where they are when checking the alternator's health.

It doesn't matter if you rev the engine up or have all electrical accessories turned on. A good working alternator will give you a result that falls between 13.2 and 14.8 volts.

Whether it is a car or a truck, almost all vehicles have a few common problems. Most of the time, it is because the battery is dead.

If the battery is fully charged, it is a simple matter to jump-start a vehicle. For the rest, check the alternator and starter and make sure they are in good shape.

Is There A Way To Reset Ford Sound System - How? 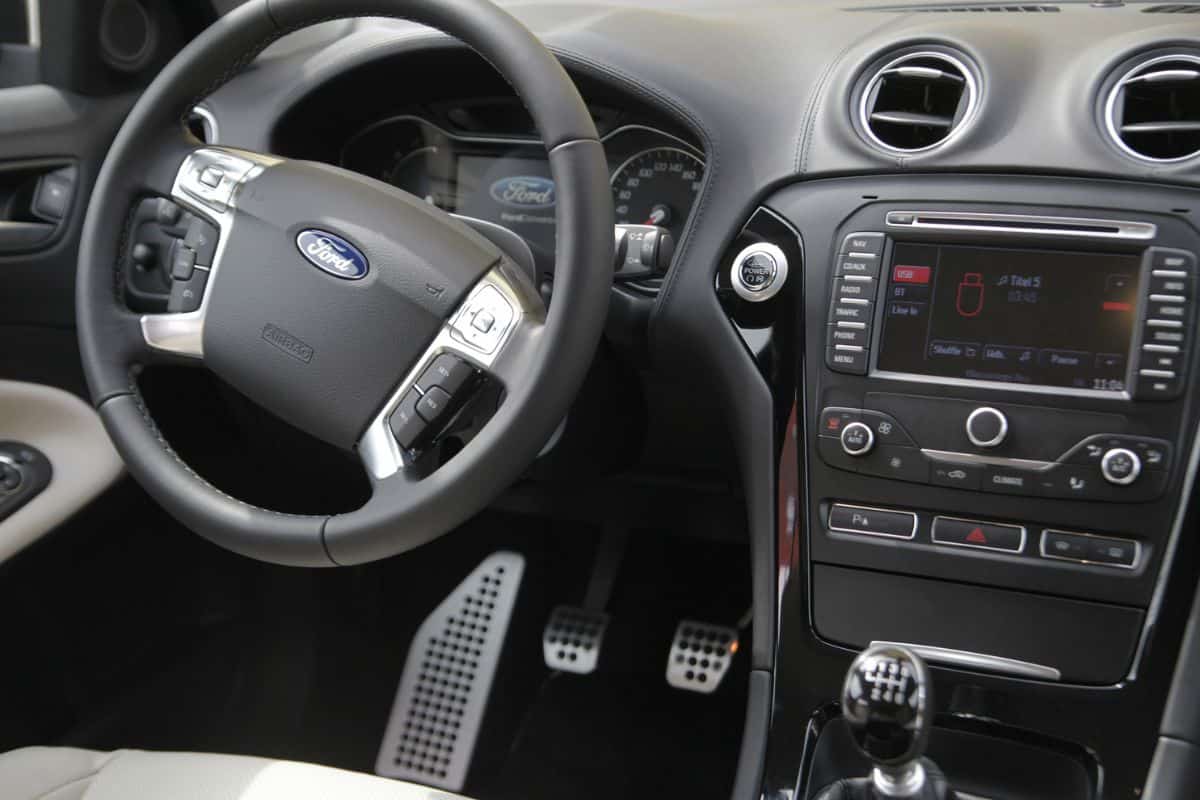 While you can't find a dedicated reset button that you can conveniently press to reset a Ford sound system, there's one way to get around this.

Just look for the "Seek Up" and "Power" buttons and press and hold them at the same time. Wait for the screen to go black and wait for three minutes to complete the process.

This may seem a little weird to some of you, but the reason why your F150 failed to start after the new radio was installed is simply because your battery was low.

The battery is a major component of your vehicle. You can test it with a simple tool called a multimeter. Additionally, the problem may be solved by changing the battery or the alternator.

Ford F150 Making A Clicking Noise; What To Do?

F150 Wont Start After Fueling; What To Do?