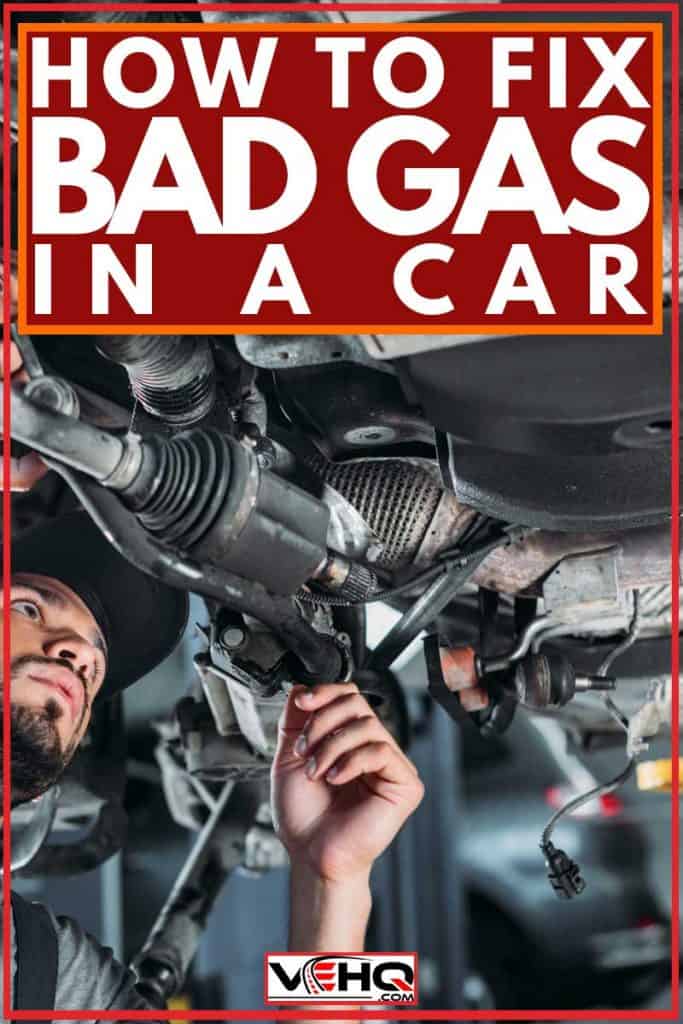 You rely on your vehicle to get you everywhere you want to go, but you need gas to get you there. While you probably have a trusted gas station or two, you visit regularly, and sometimes, when you’re off the beaten path, you may stop somewhere else. You fill up, but your car begins misbehaving. Is this because of bad gas? What should you do?

Fixing bad gas in a car is a job for a professional mechanic. If you suspect - or perhaps know - that your car has the wrong kind of gas in the tank, or maybe just old gas, you need to get a professional to fix your problem. Here are the steps that he or she are likely to follow -

In this article, we’ll explain bad gas in-depth, including what it is and what its symptoms are. We’ll also talk about whether it’s safe to drive if your tank is filled with bad gas. And again, we can't stress this enough - this post is for educational purposes, in case you're wondering what your mechanic would do. Reading this does not replace professional advice. Your own vehicle may have a different setup or you may otherwise need to follow a different kind of system.

What Is Bad Gas? How Do You Get It?

Before we get too much deeper into our discussion on bad gas, you have to know what it is. There are some pretty telltale symptoms that we’ll describe in the next section, but for now, we’ll say that bad gas is another way of referring to contaminated gas.

What can contaminate your gas to the point where it’s considered bad? One of the biggest culprits is water. This 2019 article from Boston 25 News paints a picture of what can happen when water gets into the gas tank. The article describes 14 cars in the Boston area that ceased functioning because they were contaminated with bad gas.

In that case, an underground storage tank’s plastic cover had ice on it that cracked in the middle of winter. The ice fell on the cars and melted, getting into the gas tanks of more than a dozen vehicles. That goes to show what a little water can do to your car.

You can also cause bad gas in your car if you fill up with the wrong fuel source for your vehicle.

It happens less often, but there’s also a criminal side to bad gas. Some less-than-stellar gas stations will claim to give you premium gas, but what they’re doing is filling your tank with a combination of low-octane and regular fuel.

In some instances, the regular, trustworthy gas station you go to makes a mistake. That was the situation back in 2012 when a Chicago BP gas station had to recall quite a large quantity of gas, 2.2 million gallons, says the Chicago Tribune. These mistakes are uncommon, but they do happen.

What Are the Symptoms of Bad Gas?

You often can’t tell that your car has been filled with bad gas until you take it for a spin. Then, you’ll start noticing a slew of problems indicative of gas contamination.

The first of these is your vehicle does not want to start up easily. It also begins releasing emissions at a higher rate than usual. Your fuel economy can drastically drop since your car is filled with gas it shouldn’t have. You may see your check engine light go on as well.

The performance of your car also greatly suffers. It could stall, making it dangerous to drive. You might hear a sound that some describe as a pinging. The vehicle may idle, which again puts you at risk on the road.

How Long Can Gas Sit in a Car Before It Goes Bad?

Earlier in this article, we talked about several ways that gas can go bad. There’s yet another cause that we haven’t discussed: filling your tank and leaving the gas in there.

Most of the time, if you’re filling up your gas tank, you plan to drive shortly after that. If that doesn’t happen, you can’t expect the gas that’s currently sitting in your tank to remain functional forever. In about 30 days or a month, the gas will go bad.

Why does this happen? Air gets into the fuel tank and begins degrading the quality of the gas. The next time you go to turn your car on, it gives you a lot of pushback. The best thing to do is to follow the steps in the intro to get rid of this bad gas.

If you know you won’t be driving your car again for an extended period, then please use a fuel stabilizer for your gas. This creates a gasoline bond that will keep it from evaporating or turning bad, even if it sits for a while. STAB-BIL’s fuel stabilizer is a highly-rated Amazon product that we’d recommend.

Can Bad Gas Ruin an Engine?

Let’s say you somehow didn’t recognize that your fuel tank was filled with bad gas. You just kept going on your way day in and day out. Is there a chance this behavior could affect your engine, even wrecking it?

Oh yes. The extent of the damage depends on a.) how bad the gas is and b.) how long you kept it in your vehicle. You’ll need to take your car to the mechanic to get it fixed either way. If you catch the issue soon enough, there’s a good chance your vehicle can be saved.

If you’re lucky, comprehensive car insurance could cover the cost of repairing your engine due to bad gas, says Auto Insurance Center. That said, this does vary from one policy to another, so check in with your car insurance company if you have any questions about your coverage.

Can I Mix Old Gas with New Gas?

From now on, you want to be very careful with your fuel sources so you can do your best to avoid bad gas. That said, you bought some gas a year or so back that has never been in your fuel tank before. Instead, it’s sitting in a jug in your garage. You’re wondering if it’s safe to combine that with the newer fuel in your gas tank.

It depends on how long the gas was sitting and its condition, but for the most part, we’d say no, don’t do it. You can’t completely confirm that you have bad gas in the jug.

That said, if the container used to store the gas was airtight, then it’s probably not bad gas. Still, you should use a gas stabilizer on fuel that will sit for a while to be on the safe side.

Can I Dump Gas on the Ground?

It’s better to be safe than sorry, and you don’t want to be sorry. What can do you do with the old gas? Can you open up the jug and dump its contents on the ground?

You technically could, but you really shouldn’t. Although old gas isn’t as combustible as newer gas, it’s still flammable. Should anyone provide a heat source near the gas, anywhere the gas was dumped could go up in flames. What's more, it's toxic for many organisms, so it isn't eco-friendly in any sense of the word.

Instead, find a hazardous waste disposal center in your neighborhood, as that’s a safe, smart place to dump your old gas. Fire stations and some automotive shops might accept the gas as well.

You’ll have to get a container that’s certified through the government for holding gas before you drop yours off. Examples include plastic jugs or jerry cans that are no more than five gallons. These containers are available at your local gas station as well as automotive centers.

Next, you have to take the gas from its current container and get it into the new one. A funnel will make this easier, but what’s most important is to take it extremely slow. You don’t want to spill any gas if you can avoid it. Even if you can’t, try not to spill too much. If you do leave any spills, you have to clean them up right away.

Cat litter can help with concrete gas spills, as it soaks up excess fuel. Leave the litter for several hours and then remove it. If there’s still any leftover gas, you’ll want to use an oven cleaner, specifically one that’s biodegradable. Give the product a half-hour to work its way into the stain, then clean the residue away with water. Any leftover solvents or oils in the gas don’t stand a chance against the oven cleaner.

What Does Sea Foam in the Gas Tank Do?

Some car owners opt to use Sea Foam for their vehicles. Sea Foam is a company that specializes in products like fuel additives for a healthier engine. According to their website, by adding Sea Foam to the fuel tank, it does the following:

Bad or contaminated gas can affect how well your car runs. In more serious situations, your engine could be ruined by leaving this gas in the vehicle for too long. While there are many sources of bad gas, it pays to know the symptoms and how to get this gas out of your vehicle ASAP. Best of luck!