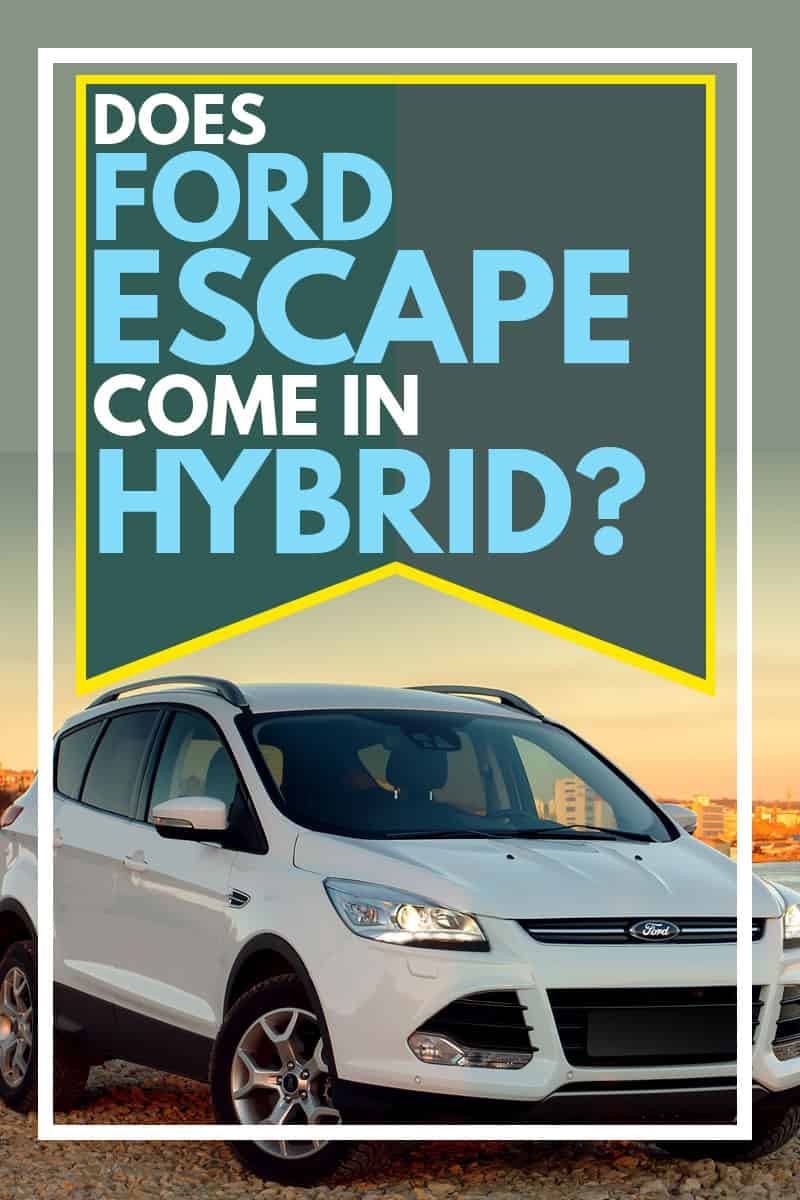 Ford just completely redesigned their Escape crossover, but do they offer it in a hybrid powertrain? If you are familiar with the Escape nameplate, you probably know that Ford used to build a hybrid version several years ago, but they stopped offering this efficient powertrain on their third-generation Escapes built from 2013 to 2019. This sent hybrid SUV shoppers to the few other choices on the market since then, such as the Rav4 and Nissan Rogue.

Eco shoppers can rejoice, because Ford once again offers a hybrid Escape model for 2020. Ford promises that later models will even include, for the first time, a plug-in hybrid Escape. Prices for the Escape Hybrid start at $28,255.

This is exciting news indeed for anyone looking for a fuel-efficient crossover. Ford appears to be serious this time, with a very competitive platform for their Escape. Let's dig in and find out a little more about this model.

The Escape Hybrid is unique in the Escape lineup because it is the only model to not use a turbocharged engine. Instead, it pairs a 2.5-liter 4-cylinder gas engine to two electric motors in order to provide 200 horsepower in the most efficient way possible.

Also helping out in the fuel economy department is the fact that the new Escape uses lightweight materials to save roughly 200 pounds over the previous model.  That means that this hybrid powertrain has less weight to deal with and allows the car to return stellar EPA gas mileage figures.

Of course, the main thing most hybrid shoppers are interested in is the fuel economy. Luckily, it appears that the EPA has just released fuel economy figures for the 2020 Escape Hybrid. And, while the standard 3-cylinder, front-wheel-drive (FWD) model is impressive enough at 27 city/33 highway, the hybrid is on a whole new level.

Ford did not make a hybrid version of the 2019 Escape. In fact, before the new 2020 models, we had not seen a hybrid version of this small crossover since the 2012 model year. In between those years, Ford built the third-generation Escape. It appears that Ford once again sees a high demand for efficient crossovers. Perhaps they were just early to the game with their original Escape Hybrid models.

What Ford Cars are Hybrids?

Ford currently offers three hybrid models in its 2020 lineup. Having recently discontinued many of its sedans and hatchback models, Ford is now heavily focused on crossovers. And that is reflected in their hybrid lineup, which includes one traditional car: the Fusion. That is also the only vehicle to offer a plug-in option, but a plug-in Escape is expected to be on the market soon.

Of course, the Escape is now offered as a hybrid, as this article discusses.

Ford has built the Fusion with a hybrid powertrain since 2008. A plug-in variant called the Ford Fusion Energi has been in production since 2013 and offers between 20 and 22 miles of electric-only range. Hybrid models are rated at 42 mpg combined (34 city/41 highway).

The new Explorer also features a hybrid powertrain option. With rear-wheel-drive, it achieves an EPA rating of 28 combined (27 city/29 highway).

Because they are so new, we really do not have any reliability information on the newest generation of Hybrid Escapes. What we can do, however, is look back to previous Ford Hybrid Escapes.

According to this article from greencarreports.com, Ford Hybrids used for taxi duty in New York and California had racked up an impressive record of reliability by 2011. According to Ford, out of 42 million battery pack cells, only 5 experienced a reliability flaw in over 80 million miles of testing.

Another article from the same site shows that some of these Escape Hybrid taxis have traveled over 300,000 miles before being retired. And, as we all know, taxi use is a hard life for cars, so regular consumers are likely to experience even better results as long as they are careful with their maintenance plans.

Can You Drive a Ford Escape Hybrid Without the Battery?

If we are referring to the large hybrid battery pack, the answer is no, you cannot drive a hybrid Escape without the battery. That means if you remove the battery from the car entirely, it will not drive - that battery is a vital component of the car's drivetrain and it must be installed and functioning in order for the car to drive.

If that battery drains, however, there are still ways for the car to work. If the 12-volt car battery is still functioning it will be able to start the engine and begin charging the hybrid battery. If that hybrid battery pack is unable to charge - completely dead, then the car still won't drive, but if it is able to be charged enough to work again, then the Escape will still be able to drive, at least for a short trip - to the mechanic to get the battery replaced, presumably.

How Much is a Ford Escape Hybrid Battery?

Once again, we don't know exactly how much it will cost to replace the current generation of Ford Escape Hybrid batteries. But we can get an idea by looking at prices for the second-generation models.

When it comes to buying replacement battery packs, you have two options - new or remanufactured. Of course, remanufactured batteries come at a significant discount.

Currently, you can purchase a new battery pack for a second-generation Escape for either $2,895 (remanufactured) or $3,895 (new). Costs for the 2020 and newer Ford Escape battery packs could very well end up cheaper than this as battery technology advances and becomes more commonplace.

Now that we have gone in-depth with the new Ford Hybrid Escape, are you interested? Or have the other hybrid crossover models on the market captured your interest? It appears that the Escape just barely edges out the Rav4 hybrid when it comes to fuel economy, but some shoppers might be swayed to stick with Toyota because of its stellar reputation for reliability. Either way, more eco-friendly cars on the road is always a good thing!

After getting all the information needed, Check out these related topics-