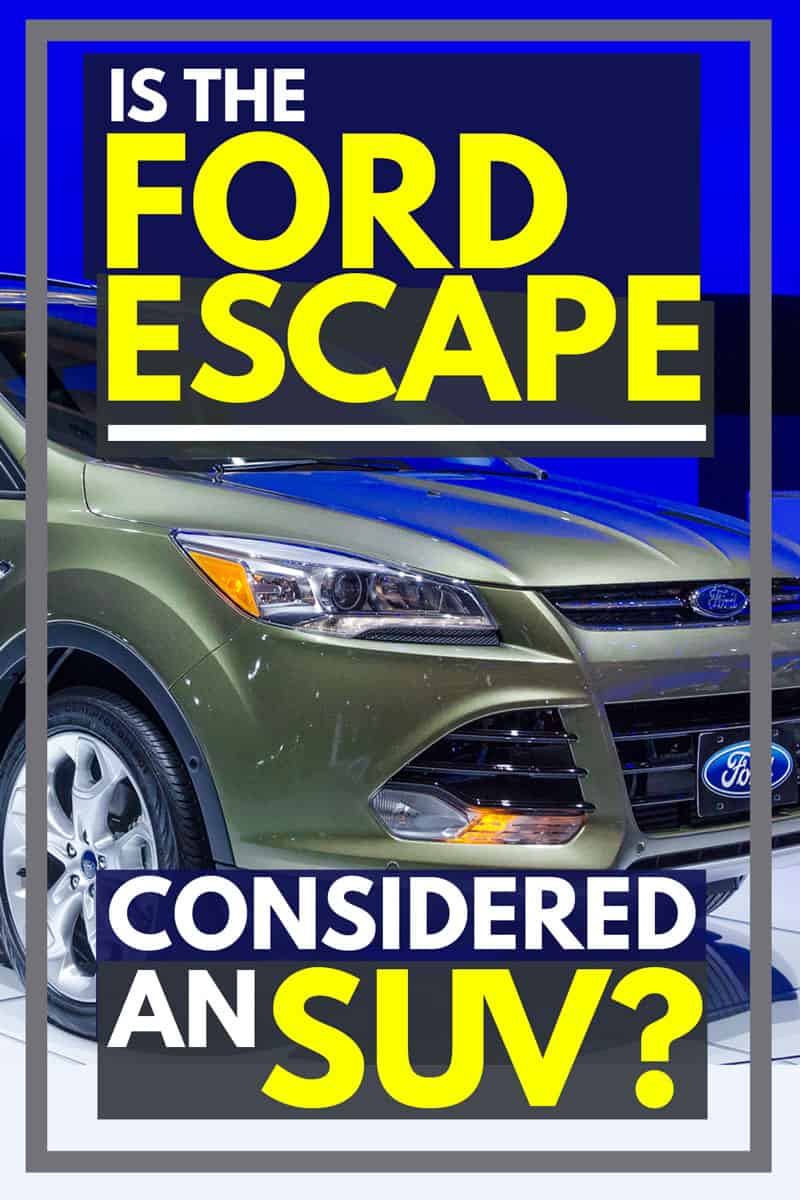 The first Ford Escape arrived in 2001. Now in its third generation, the Escape continues to evolve. Vehicles like the Escape are wildly popular car choices for consumers. In fact, they are putting sedans on the sideline. But if you are wondering what class of vehicle the Escape falls into, this trendy car causes a bit of confusion. Is the Ford Escape considered an SUV (Sports Utility Vehicle)?

From a manufacturing perspective or perhaps a car expert’s view, a crossover is not an SUV. Rather, it’s a type of SUV. Read on as we dig in and help you understand the world of SUVs a bit better.

SUVs Are Defined By Size and Type

All the crossovers have more of a car-like feel in how they handle and perform. These vehicles aren’t designed as off-roading cars like the truck-based SUVs. They are meant to stick to city and highway driving. This type of SUVs offers more space and comfort compared to sedans but is comparable to the space and comfort of traditional SUVs. The crossover is also more fuel-efficient than the truck-based SUV.

Ford has categories or classes for its vehicle line up. There are six models in its SUV/Crossover fleet. We cover these cars in more detail later in the post. Ford is not alone in marketing crossovers as SUVs. There are more than 20 vehicles that compete directly with the car class of the Escape. And depending on what you read or who you talk to you, the terms “crossover”, “small SUV”, “compact crossover SUV”, “compact SUV” or simply “SUV” will be used interchangeably.

What's The Difference Between Ford Escape And Ford Edge?

Ford’s Escape and Edge are similar in that they are compact crossover SUVs that seat five passengers. However, they are marketed toward different customers based on styling, features and price points.

The Edge is geared toward customers looking for a feature-filled, plusher and sportier style of car. The Edge is sleek with better performance and handling than the Escape. All those perks come at a price though. The Edge customer needs a bigger budget, as the Edge starts at $31,000 and pushes a top-end price of $50,000.

The Escape is slightly smaller overall in size but that doesn’t have much of an impact on interior space. And, the Escape is filled with features and technology. But the finishes aren’t nearly as nice as those in the Edge. The 2020 Escape starts under $25,000 and trims levels max out around $28,000.

Choosing between an Escape and the Edge comes down to budget as well as personal preference for features and styling. If performance and luxuriousness are at the top of your list, the Edge is for you. If budget and price are the most important factors to you, consider the Escape.

What SUV Is Comparable To Ford Escape?

The Escape is one of Ford’s best-selling cars. But it faces stiff competition in the marketplace where there are at least 20 crossover SUVs to choose from. Compact crossover SUVs like the Honda CR-V, Toyota RAV4, Nissan Rogue and Chevrolet Equinox are popular choices. In fact, they all outsell the Escape. Some other models that compete in the space include the Hyundai Tucson, Kia Sportage, and Mazda CX-5.

The Escape is a comparable car to the Honda CR-V, Toyota RAV4, Nissan Rogue and Chevrolet Equinox. All car models can seat up to five passengers, have much of the same interior and exterior features and starting price points that are similar. Ford simply just doesn’t have the same market share. Perhaps the newly designed 2020 Escape will get Ford some attention from consumers in the crossover SUV space.

What Other SUV's Does Ford Have?

Ford has something for everyone in the SUV and crossover category. The six vehicles in their line up come at different sizes and prices. Each model has its own distinct features as well.

In the category of SUVs and Crossovers, Ford has these six vehicles:

If you are in the market for an SUV and not quite sure to start, Ford has you covered with options to suit almost any classification of an SUV by size or budget.

Which Is Better Chevy Equinox Or Ford Escape?

The Chevy Equinox and Ford Escape are both considered crossover SUVs. At a high level, they are quite the same type of car. Deciding which is better depends on what features or what criteria are more important to the driver.

We break down some key factors of the 2020 models below to help shed light on which might be better:

Cargo Capacity Behind the Second Row

Cargo Capacity With the Second Row Folded Down

Many factors go into the decision of buying a car. If you are looking at the Equinox and the Escape, the factors above lean toward the Ford Escape as a better option if the lowest price isn’t your main buying concern.

The Ford Escape falls into the SUV category of a compact crossover, but most crossover manufacturers simply call this type of vehicle an SUV.