Ford is well-known for reliable trucks. Modern updates to that trademark standard have only helped the manufacturer pull away from the rest of the crowd. That said, what are the differences between Ford's two latest releases, the Ford F-150 King Ranch and Ford F-150 Platinum? We've looked closely at the specifications for each to get you the answer.

The Ford F-150 King Ranch and Platinum trim levels overlap in roadway power, interior design, and price. The Platinum trim only exceeds the King Ranch in technology and safety features. More than anything else, the appearance of the two trucks has brought on conversations about country practicality versus city-style, though both trucks offer drivers a luxury operating experience.

In reality, determining which truck suits you best is an entirely personal decision. Even so, we can break down the differences between the two models. We've researched the pros and cons of each truck to help you determine whether you want a truck that embodies downhome spirit or inner-city chic.

Ford F-150 King Ranch Versus Platinum: What Are The Differences?

When it comes to finding the best truck on the market, you have to consider each model's quirks. The Ford F-150 King Ranch and Platinum models may be built from the same cloth, but there are ways that the models strive to outdo one another.

Let's break down the trucks' features by category and explore how they compare and contrast. 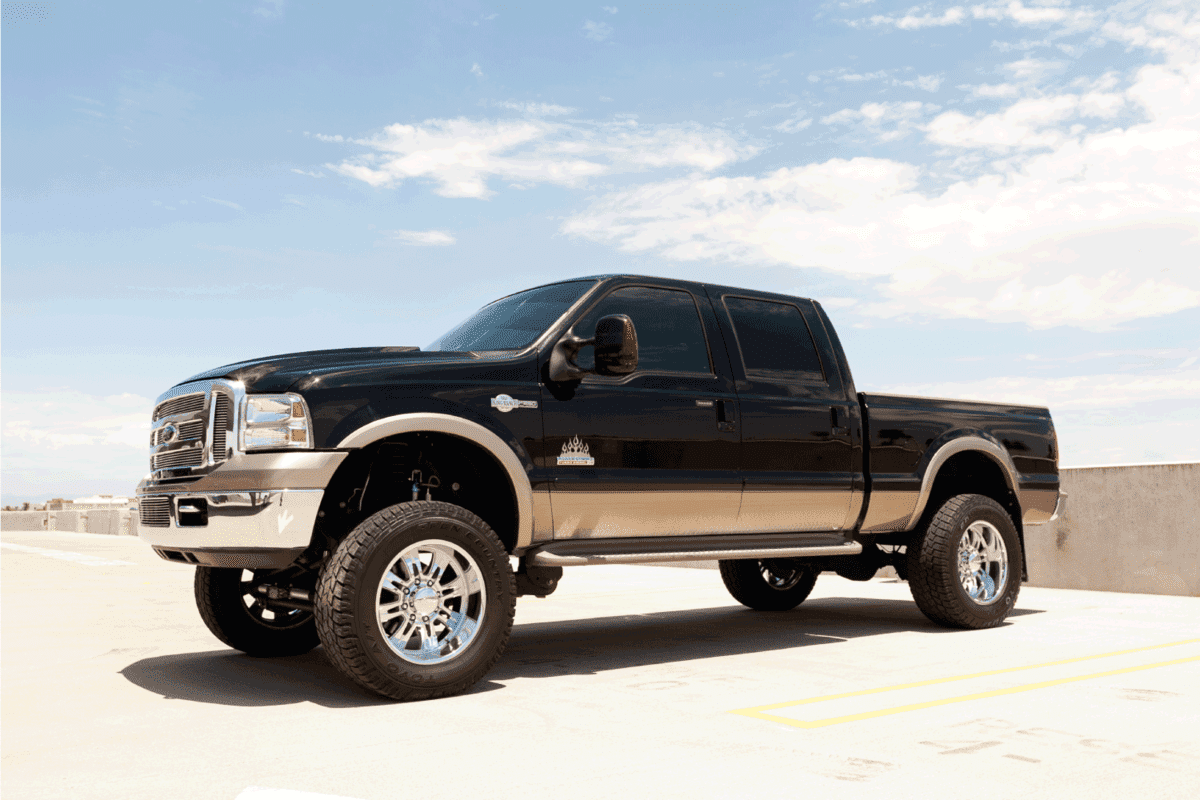 Ford remains consistent in outfitting its trucks with some of the best engines in the business. Both the Ford F-150 King Ranch and Platinum run on a V8 engine. This engine is a distinct upgrade from the one used in previous models.

The five-liter engine offers both trucks 400 horsepower alongside a 9,300-pound pulling capacity. Both trucks also benefit from 410 pound-feet of torque.

Even the gas mileage on these two trucks rings somewhat similar. While trucks are never going to be easy on your roadway budget, you can expect to get 16 miles per gallon on inner-city roads when driving either truck. Once you take to the highway, each truck's mileage rises to 22 miles per gallon.

The leather detailing of both the King Ranch and Platinum Ford F-150 is one of each truck's best selling points. No matter which truck you park in your garage, you'll benefit from plush leather seats and an interior that shines with sensible but indulgent modern touches.

Both trucks come with heated seating throughout the cab as well as a heated steering wheel. Ford even equipped both trucks with a ventilated driver's seat, ensuring that you can stay warm but also comfortable while behind the wheel.

The King Ranch and the Platinum Ford F-150 are neck-in-neck when it comes to interior detailing - and both rides are going to spoil you rotten while you're on the road.

Technology and the Dashboard

Outside of their leather detailing, the King Ranch and Platinum Ford F-150 also come equipped with varying arrays of technological tools. Worried about navigating from place to place? Both models boast a voice-activated GPS built into the dashboard. Want to stream your roadway playlist? You can run your tunes through a Bang & Olufsen audio system.

Don't worry about freezing in the cab during the coldest days of the year, either. Each of the Ford models come equipped with a remote start option, allowing you to heat up your truck long before you get behind the wheel.

The only difference between these two trucks, in terms of technology, is their Wi-Fi capacity. The Ford F-150 Platinum comes along with a Wi-Fi hotspot, while the King Ranch does not. If you need to entertain the kids on a long drive or want to entertain at the next tailgate, this hotspot puts the Platinum model just an inch ahead of its King Ranch competitor.

While both the King Ranch and the Platinum Ford F-150s come equipped with state-of-the-art safety features, one of these rigs has more toys than the other. When you drive the King Ranch, you'll enjoy a rear-view camera to make backing up easier. All of the passengers in your cab will be safe, too, courtesy of the truck's side and front airbags.

Drivers who bring home the Platinum model also benefit from rear cross-traffic alerts and blind-spot tracking technologies. These tools help drivers better manage the size of their trucks, more adeptly moving through traffic while protecting all of their passengers. The Platinum model also comes equipped with second-row safety belts that can inflate in case of an accident.

When it comes to protecting you and your loved ones, the King Ranch and Platinum Ford F-150s both have the tools to get the job done. The Platinum model happens to outstrip its competitor with the inclusion of several extra safety aids.

The King Ranch and Platinum models may have a similar inner framework, but their overall appearances differ somewhat substantially. Many reviews mark the two trucks as Ford's delineation between its country and inner-city audiences.

As the name suggests, the Platinum model is the truck to take a step away from Ford's traditional rural outlook. The truck embraces a chrome coat along with similar accents, referencing night driving in the city more than it does backroad mudding.

The size of the wheels - capping at 20 inches - better suits well-paved city roads, too. Combine these distinct choices along with the truck's polished leather interior, and you have a vehicle that can haul substantial weight without sacrificing its sense of modern style.

Comparatively, the King Ranch speaks more to Ford's roots. The manufacturer swaps the Platinum's chrome accents for wooden ones and uses a two-bar grille instead of the Platinum's three-bar accent. The move away from metallic colors and back towards the Ford red further positions the King Ranch as the perfect truck for country roads.

That said, don't let the appearance of either truck fool you. Both models are designed to introduce their drivers to a new world of luxury. The difference in look allows Ford to appeal to all of its potential drivers. This means that you can benefit from the manufacturer's latest and greatest upgrades, no matter what your sense of style may be. 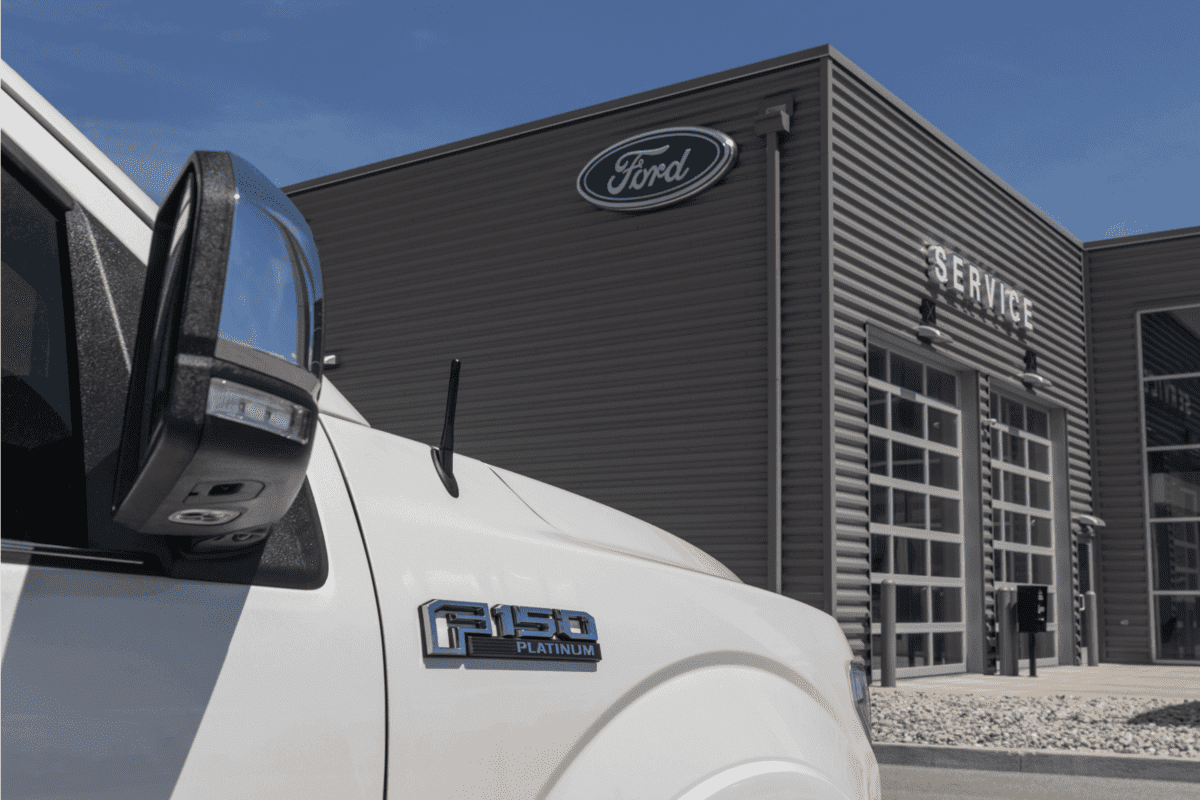 Identifying a top-of-the-line Ford F-150 is no easy feat. Rather, you can break down Ford's F-150 releases by their best years, wide-reaching features, gas mileage, and more.

The 2021 releases tend to be top of the line in terms of their integrated technology. The King Ranch and Platinum, along with their in-house peers, are also well-loved for their customization opportunities.

Ford encourages interested buyers to mix and match engines, interiors, and other details when purchasing either model. As such, buyers have more opportunities than ever to make either the King Ranch or the Platinum model uniquely their own.

As a general practice, Ford manufacturers do not include real leather in their vehicles. The leather seats and detailing in both the King Ranch and Platinum models is either leather-appointed or faux leather.

That said, if you want real leather in your King Ranch, you can request as much. Ford allows interested buyers to make special orders and can customize your seats according to your leather-working preferences.

Ford's engines are well-known for their reliability and their considerable towing strength. When it comes to the best of the best, though, you can look to the 3.5L EcoBoost V6. This engine was recently released alongside other 2021 Ford F-150 models.

Ford notes that the engine offers trucks 14,000 pounds in towing capacity alongside 400 horsepower and 500 pound-feet of torque. The engine also boasts a slightly better roadway mileage than that of the engine in the standard King Ranch or Platinum. Trucks equipped with the 3.5L EcoBoost V6 tend to get 18 miles to the gallon in the city and 24 miles to the gallon on the highway.

While both the King Ranch and Platinum models come with V8, 5L engines, you can equip them with Ford's latest and greatest. Ford allows interested buyers to customize their purchases for an additional cost, meaning that you can increase your truck's towing capacity as you see fit.

The used F-150 market is a competitive place. Determining which of the Fords in your area suit you best is as much a matter of availability as it as of personal taste.

That said, there are some years that you'll want to keep an eye out for while searching for your new ride. If you're not interested in the 2021 market, you can watch for F-150s from:

While the features on each of these models will differ, each truck was known at its release for its reliability on the road. With a bit of TLC, you can clean up a used Ford and transform it into a long-lasting primary vehicle, no matter what its age may be. 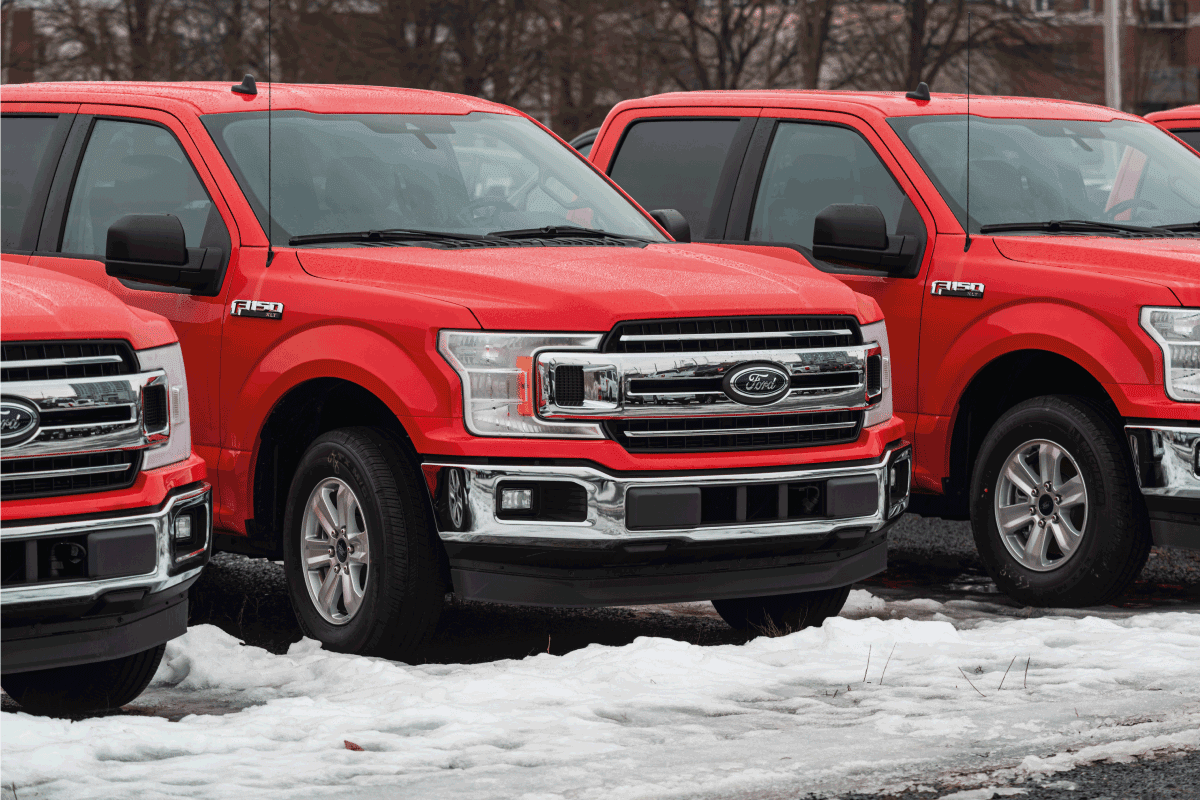 Park a One-of-a-Kind Truck in Your Garage

Ford's reputation for excellence is one that the manufacturer has fought for over the past several decades. With the latest Ford models now hitting the road, it's more important than ever to distinguish between the features the manufacturer makes available.

Both the King Ranch and Platinum Ford F-150 models offer you a look into the future of luxury trucks. The overlap in the vehicles' towing capacity, roadway mileage, and interior detailing makes them relatively comparable. The Platinum model only starts to pull away from its competition when you take technological innovation and certain safety features into account.

That said, Ford released both the King Ranch and the Platinum models with a diversity of tastes in mind. Whether you're in the market for good ole country driving or inner-city style, you'll find what you're looking for - and then some!