If you need to move snow or other debris, the question is can you use your Ford F150 to plow? The simple answer is yes, and we’ve researched this topic in depth and have some essential tips and other factors for you to consider. 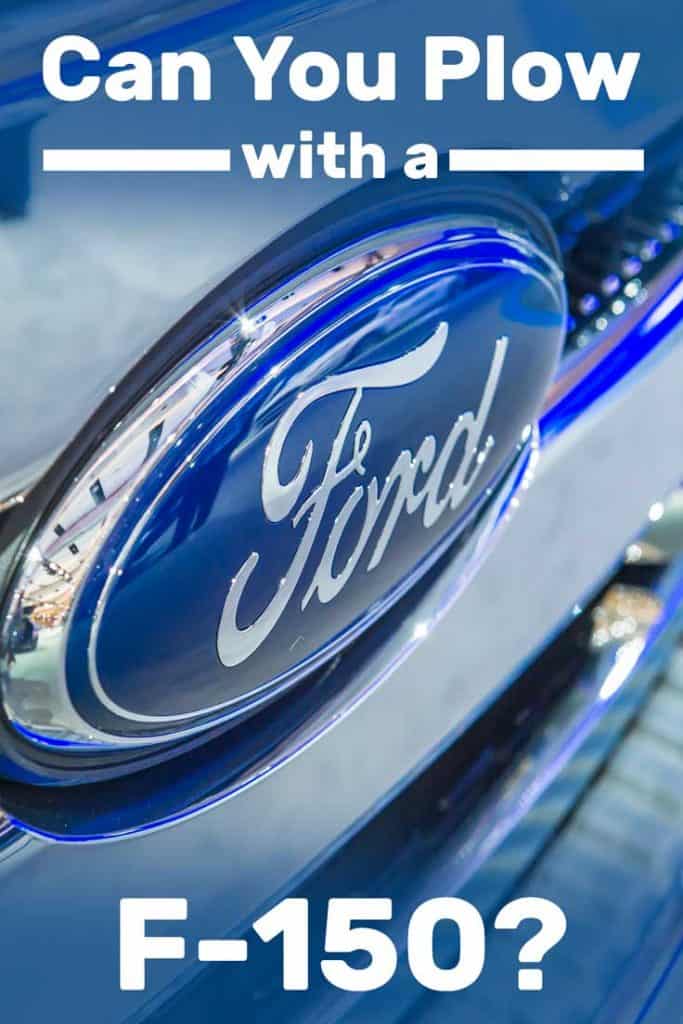 You can plow with a Ford F150 but only if it has the right trim and additional packages. This is what your F150 needs to have if you want to use it to plow -

Even so, an F150 is probably not the best choice for major plowing jobs. A ½ ton may be a beast of burden for many tasks, but for it to be used it to plow, it’s safer to go with a ¾ ton truck due to the front and rear load capacity as well as the load-bearing abilities. The lighter ½ ton truck may be cheaper, but due to the workload you may have, it could incur much higher regular repair costs.

There are many factors to consider, we know, but we will elaborate on everything in greater detail in this post to help you make an informed decision.

The Design Strengths of the Ford F150

Recently, Ford recognized that their light and heavy-duty F150’s was used for many different types of jobs and put to the task. From testing and consumer usage data, the engineers with Ford Motor Corp. realized that the F150 was being used as a utility truck, one for various types of work, and every kind of work needing different specifications.

Armed with that data, Ford went about renovating the F150 to be more versatile, stronger, and durable. The redesign and reengineering concepts were to build the F150 to be adaptable for any task, without being too bulky as to be limited to only heavy-duty work. 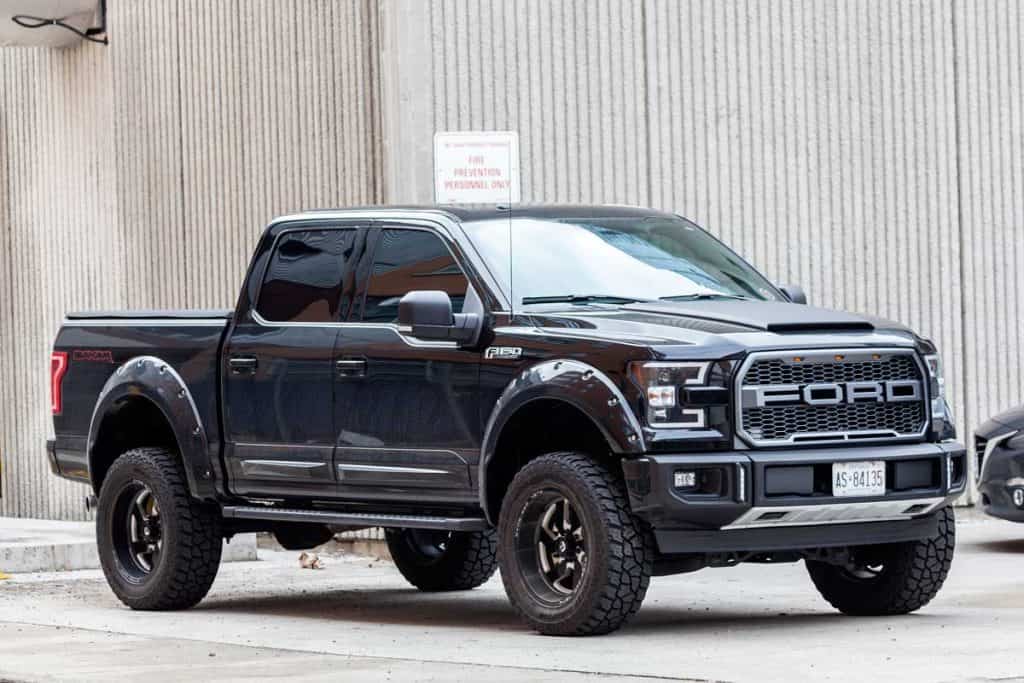 Engineered to be 700 pounds lighter yet with more high-steel strength than its predecessors the new F150 design allows for higher capacity, workload, and handling, all traits that are ideal for plowing.

The design changes offer Ford owners more flexibility in their truck, and the vehicle is more versatile as a result. The more massive design enables the f150 to add a plow-package without concern about affecting the carrying capacity of the truck’s front end. With a more substantial body and better chassis support, as well as suspension upgrades, the truck design allows for plow-packages that are optimized to work with the newly upgraded Ford F150.

Additionally, because of the unneeded chassis or suspension upgrades, these design changes make it easy to adapt your truck when adding a plow-package without additional chassis upgrades or suspension modifications.

While different plows have different needs and abilities, keep in mind that with the F150, a lighter plow is an excellent recommendation. The heavier the plow, the more potential long-term damage to the front of the truck, so consider that when looking for the right plow-package for your vehicle. The stronger light-weight F150 makes adapting and rigging the truck more natural, while also allowing the truck the versatility to be an everyday vehicle.

Engine Size Needed to Plow with the F150

This larger engine is because of the air intake needs of the Turbo Charged V6 found with the 3.5L. Due to a larger grill intake that becomes restricted by the rigging of the front plow, compromising performance in the smaller engine block.

One more feature change in the F150 that makes it compatible for retrofitting with a plow is the enhanced electrical components.

Ford made the change in most of its F150’s from hydraulic steering to electrical steering, which allows for better fuel economy but can be taxing on the engine’s alternator to provide enough energy for the electrical systems.

The workaround is that with a simple push of a button, the new electrical system design shuts off non-essential functions and redirects the electricity to essential operations such as powering a plow.

Cabin Size of The F150 and Plow Needs

Paired with a lighter plow the newly designed heavier F150 can handle the workload of pushing a plow with minimal front-end damage or stress.

While most plows can run in the range from $800 to a few thousand dollars for plow and prep-options, Ford offers a pre-plow prep package for only $50. Their plow options built for the 5.0L V8 engine F150 are compatible with any cab design from Regular, SuperCab, and SuperCrew, and it is recommended to go to an approved plow distributor for plow installation.

Some other things to consider especially with 2018 and newer models of the F150 is that the newer ones are designed with plow packages in mind.

Be careful that any plow package you choose does not exceed the front axle available payload rating, and have minimum 10-20 millimeters of clearance to OEM components such as cooling system, steering column, and more. Finally, the weight of permanently attached aftermarket items such as a plow must not be more than the Total Accessory Reserve Capacity (T.A.R.C.).

When shopping for the newer models of the F150, if you’re going to use it to plow, you need to look at the Lariat body, and trucks equipped for plow-packages will have a Snowplow button on the dash.

If you choose to add a plow to your F150, you’ll need to make adjustments to the front tire wheel alignment to prevent premature tire and uneven tire wear, as well as potentially need to realign front headlights. Following all these guidelines will help keep your Ford F150 in compliance with warranty details as well.

If you need to plow a small area, there are some recommendations Ford offers when shopping. Some are standard equipment issued, and others are recommendations to look for in your pre-sale package and upgrades.

Suggestions such as all-wheel drive are a no-brainer in harsh climates as is the option to aftermarket fit your truck for a plow. The key is ultimately your safety and to keep the truck in good working order after your job. If followed correctly, these guidelines will not only help you but save you money in the long-run.

Remember, these are all recommendations and not requirements, but keep in mind that following all safety guidelines and factory recommendations will increase your warranty coverage, in case it’s ever needed.

As mentioned above, it's best to make sure your F150 has all of the following -

Use Your F150 to Plow Safely

There are many plows on the market to choose from but be sure to look for ones built with the Ford F150 plow package in mind. Also, keep in mind that you’re F150 is a light-duty truck, so shop for a plow made for half-ton and light-duty trucks.

Typically, the design is a V-plow shape and is constructed to be responsive if it comes into contact with a heavy object. It should also offer an enclosed hydraulic system to protect against corrosion and freeze-up in extreme weather and a mounted light system, preferably one with LED lights.

From long to short driveways, small alleyways and parking areas, and more, the workhorse Ford truck is more than capable for your lighter plowing needs. Ensure safe roadways, clear light brush, and debris quickly, and safely using your F150 to plow.

For your more massive plowing needs, our recommendation is that while the F150 can handle some of the tasks, there is a higher risk of potential damage to the frame and front-end of the truck, so it's not one highly recommended.

You may also find the following posts interesting -

Which Full-Size Pickup Truck Is The Safest? (2019 Edition)