Ford F150s are popular trucks with a good reputation, so it's easy to decide to purchase one. However, they come in five different trims, which means that you still have some more decision making to do. If you are looking for a more basic model and you're not sure which year you want to purchase, you might be wondering what the differences are between the XL and the XLT. We have done the research to bring this answer to you.

Regardless of year, the biggest difference between the XL and the XLT is the type of driver they appeal to. Someone looking for a simple but capable truck for work might prefer the XL. On the other hand, someone who wants the same reliable truck but is also looking for style and convenience will find that the XLT is a better match.

Differences do vary by year, though, so here are the most prominent differences for the five newest models:

While this information may help you narrow down the year and model you are looking for, it would be helpful to learn more details about each model by year. This way, you can be fully informed before making a final decision. We will discuss the main differences between the XL and the XLT for each model year. 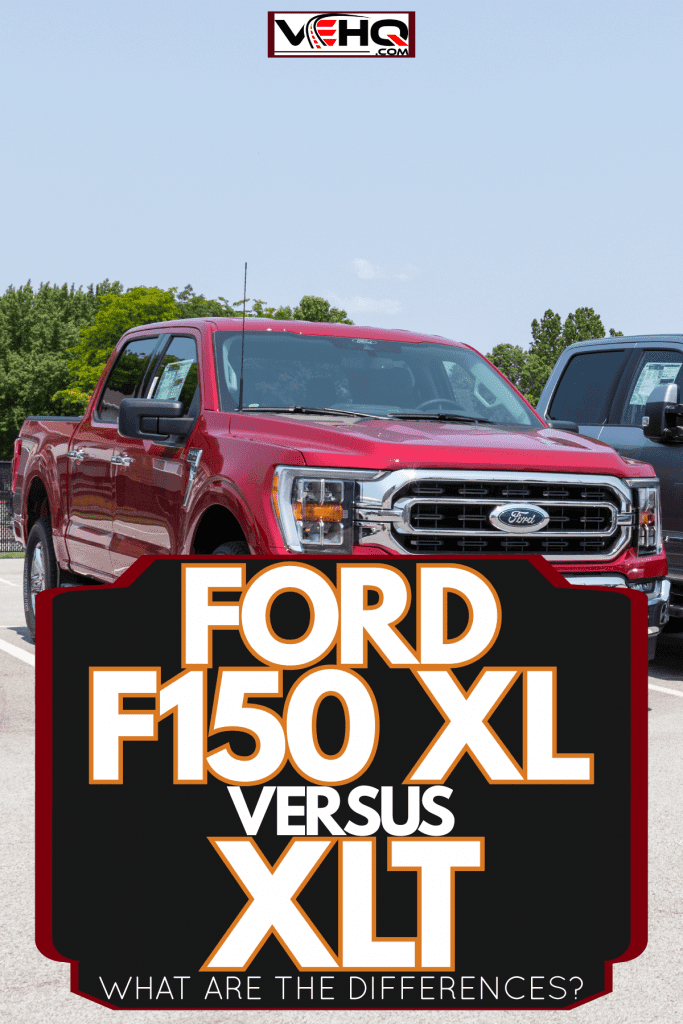 The XLT also offers some optional features that are not available on the XL, such as an LED lighting option for the truck bed and power-adjust pedals.

Ford dealer Lafayette Ford reports that the 2018 XL and XLT models are very similar in performance and features. The F150 XL offers a basic mode of transportation without any bells and whistles, perfect for drivers using this truck.

The XLT is a little more stylish with chrome details instead of the XL's black. The XLT also allows its driver to have more entertainment on the road with Sync capability and a CD player.

The XLT rounds out its slightly more convenient model with power mirrors and locks as opposed to the manual versions on the XL.

In 2019, the XLT continued to offer a more stylish vehicle. This model comes with aluminum wheels, chrome bumpers and grille, and color-coordinated floor carpeting as opposed to the silver steel wheels and black bumpers, grille, and floor.

The XLT also continues to offer standard power interior and tailgate locks while these features are still standard on the XL.

Interestingly, the XLT continues to make advancements with Ford-exclusive features adding MyKey and FordPass to the already offered Sync. The XL does not offer any of these features.

Again, you will have to weigh the importance of these extra features when deciding between the XL and the XLT, as they are the main reason for the $6,00o price difference.

Lafayette Ford tells us that the gap between the XL and the XLT just continues to grow. While the XL remains a faithful and steady basic work vehicle, the XLT continues to evolve.

The XLT has made some significant changes this year as far as features are concerned. The XLT now offers a diesel engine option as well as six different wheel options. Entertainment continues to be a focus as well, with Apple CarPlay and Android Auto available, along with an 8-inch touchscreen display. The 2020 XLT starts at $36,000.

Now just because the XL doesn't offer as many up-to-date features as the XLT, that doesn't mean it hasn't also gotten an upgrade. The XL now offers four different wheel choices compared to the XLT's six.

Like the XLT, it has a manual air conditioning system and a 2.3-inch productivity screen. The XL is now offering cruise control and MyKey as optional features and has a key-lock tailgate. Because the XL maintains its no-frills status, it starts at a more affordable $30,000.

The XL is staying true to its reputation of being basic yet reliable. However, even the XL has had some upgrades since previous years. The XL offers a hybrid engine and transmission option this year and has added some important safety features such as a rearview camera, hill assist, and post-collision braking.

As expected, the XLT continues to stay one step ahead of the XL. While the XL now offers an optional lane-keeping system, Ford co-pilot, and reverse sensing system, the XLT has all of these features standard.

Both the XL and the XLT come with a standard 4x4 drivetrain. However, you can opt to purchase an upgrade to the FX4 package. With an estimated cost of $1,000, this additional package increases your truck's ability to handle light off-roading and driving through difficult terrain.

Does The FX4 Sit Higher?

The FX4 does not officially sit higher than the 4x4, although some consumers and vehicle enthusiasts say that it does. The FX4 package includes larger tires and tougher suspension and shocks, making the truck appear to be higher than the 4x4.

The FX4 handles better on difficult terrain due to the improved suspension, shocks, and ability to withstand damage. For everyday driving and long distances, the 4x4 is a better truck. The ride is smoother, and all of the extra features in the FX4 package aren't necessary for everyday driving.

The biggest decision you are going to make when purchasing your truck is what trim option you want. However, you will also need to decide what engine option to choose and what model year best matches what you are looking for in your truck.

The 3.5L EcoBoost V6 engine is routinely identified as the best overall F-150 engine. However, the engine that is best for you depends on what you need your truck to be able to do. An engine with superior towing capability may not be the most fuel-efficient for someone who drives long distances, for example.

What Year F-150 Is The Most Reliable?

The Ford F150 is a dependable truck for towing, hauling, or simply driving. While the XL and XLT have significant differences in many important areas, you can be sure that you are getting the best that Ford has to offer regardless of the trim you choose. The trim that is right for you boils down to whether you are someone who enjoys a simple trunk with few bells and whistles or someone who enjoys a little extra comfort and convenience.

Regardless of the trim you purchase, your truck will not feel like yours until you make it your own. Take a look at these articles below to find inspiration to customize your truck's appearance:

14 Gorgeous Ford F150 Seat Covers That Can Transform Your Truck

11+ Ford F150 Floor Mats That Can Protect Your Truck