Since its introduction in January 2014, the GMC Canyon has established itself as a popular mid-size pickup truck. However, many prospective buyers have wondered if the truck has a standard or optional sunroof. We've looked closely at Canyon models to answer this question for you.

Despite some interest from potential buyers and current owners, General Motors has not released any GMC Canyon models with sunroofs as a standard or optional feature. There is also some debate over whether sunroofs are a worthwhile car accessory or if aftermarket sunroofs are trustworthy.

We know that’s a lot to take in, so we’ll discuss everything in more detail in this post! We’ll lay out the pros and cons of a sunroof, whether or not it adds value to a vehicle, what differentiates it from a moonroof, and if you should consider sunroofs installed by third parties. Let’s get started! 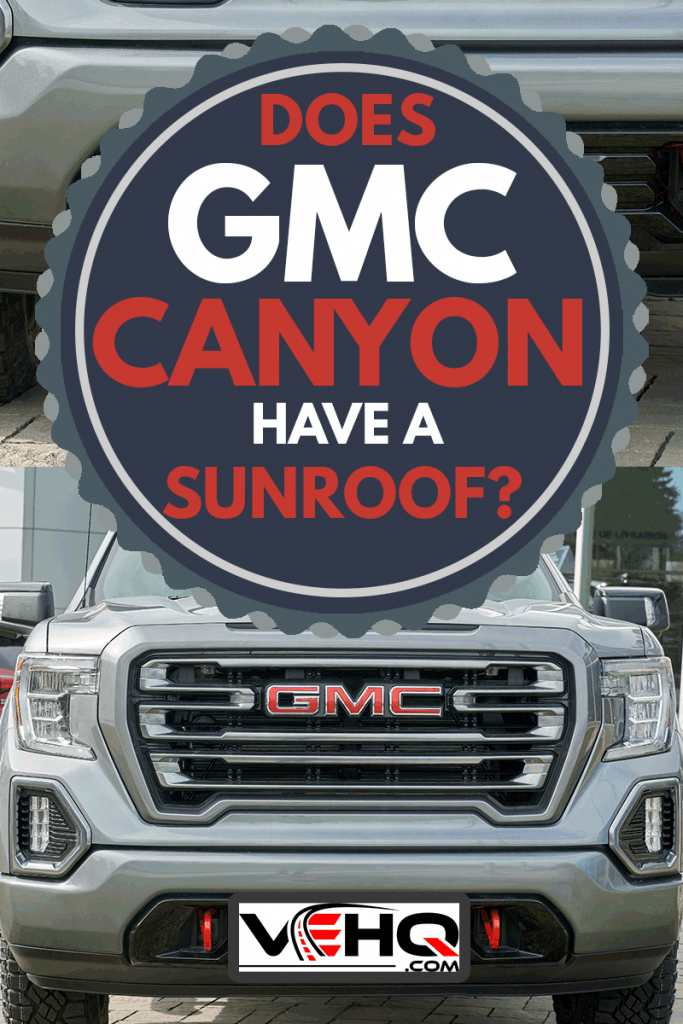 What are the benefits of a sunroof?

Sunroofs provide many benefits, explaining why some truck owners have been asking to see them included on the GMC Canyon. Many drivers just like the way sunroofs look since they’re an accessory often included in luxury vehicles or premium trim levels of ordinary cars. But they have practical uses too.

Sunroofs let more natural light into the cab and can help the interior feel more open. A sunroof lets you see more of the night sky without having to leave your car. You can park, slide your seat back and gaze at the stars.

They also provide more ventilation since you can open them while driving to enjoy some nice airflow without the noise that always follows when you open your side windows. Additionally, you can leave it slightly open while you leave your car parked on a warm day, allowing hot air to escape. That way, the inside won’t be unpleasantly hot when you return.

What are the drawbacks of a sunroof?

Obviously, most sunroofs are made of glass, which can break, potentially inconvenient, and expensive to replace. Opening a sunroof, particularly at high speeds, harms the car’s aerodynamics as it increases drag. The sliding roof section can reduce headroom for those in the back seats if it retracts inside the interior compartment instead of into or above the roof, making rides for taller passengers less comfortable.

Sunroof assemblies can also weigh your car down to the point that it decreases the vehicle’s mileage. Normal assemblies weigh roughly 50-80 lbs (23-36 kg), while panoramic sunroofs are usually 120-200 lbs (55-90 kg). To make matters worse, the assembly’s weight is located at the car’s top, which means the vehicle’s center of gravity moves there as well. A high center of gravity impairs your car’s handling.

As with almost every car accessory, maintenance will eventually become an issue. The assembly, electrical components, rubber, and glass will need touch-ups. As your car ages, the sunroof is more prone to leakage, and rust can appear around the glass’s edge.

Finally, there’s always the chance that you’ll never use the sunroof. You might also use it only a couple of times, and then never think about it again. Either scenario makes owning one pointless. If you’re thinking about buying a car with a sunroof, carefully weigh the pros and cons before deciding if they’re what you want.

What is the difference between a sunroof and a moonroof?

Many people think that “sunroof” and “moonroof” are two names for the same accessory, but that’s inaccurate. There are actually several key differences between them.

A sunroof is usually an opaque metal panel with a color matching that of your car’s body. You can tilt it open, remove or retract it, allowing sunlight and fresh air to enter your car. Sunroofs have fallen in popularity over the years, and when most drivers nowadays say their car has one, they’re usually referring to a moonroof.

Moonroofs are a type of sunroof, but they’re made of non-removable tinted glass. They can slide or tilt open to let light and air inside. Some moonroofs have an electric or manual retractable shade in the headliner, which matches the vehicle’s interior and cools the passenger compartment.

Despite these differences, you’ll still hear the terms used interchangeably. Exercise caution when you’re buying a new vehicle, and make sure that the sunroof or moonroof it offers is what you’re looking for.

Does a sunroof add value to your car?

A sunroof definitely adds value to your car, but it’s debatable how much. Some experts say that sunroofs greatly increase a car’s resale value, whereas others believe the improvement is less significant.

If your car is a luxury model or a high-trim variant of a non-luxury model, then you’ll absolutely want to install a sunroof if you’re thinking of selling the vehicle. Sunroofs are often expected to come in luxury vehicles, so the absence of one could hurt your car’s value. Generally, a sunroof can increase most vehicles' resale value, even lower-trim variants, as it’s an expectation for many buyers.

Keep in mind that some buyers won’t want a sunroof, especially if they’re wary of any of the accessory’s disadvantages that we’ve discussed previously. Additionally, the sunroof should be in good condition since one that’s rusted, leaky, defective, or poorly installed will drive potential buyers away and hurt the car’s value.

Are aftermarket sunroofs a good idea?

Given that a sunroof grants a car additional resale value, you might wonder if it’s okay to have one installed on your present vehicle. Sunroofs added to a vehicle after it’s manufactured, called aftermarket sunroofs, have a controversial reputation.

If you can find a trusted brand, it’s possible to install a high-quality aftermarket sunroof. Ensure that the sunroof has silicone seals and strong polycarbon handles and hinges, as these parts ensure that it doesn’t leak. Also, look for a frame made of aircraft-grade extruded aluminum that’s been powder-coated several times and baked at a high temperature. If an aftermarket sunroof comes with a lifetime warranty, that’s also a good sign.

However, aftermarket sunroofs have notable drawbacks to be aware of as well. Unlike factory sunroofs, also known as OEM (Original Equipment Manufacturer) sunroofs, which are made specifically for the vehicle they’re installed and are flush with its surface, aftermarket installs need to cut a hole into the car’s roof. The hole’s edges are covered with a trim ring that sticks out above the surface. There are safety issues with aftermarket sunroofs since removing a large piece of your car’s roof to add a feature it wasn’t built to accommodate can compromise its integrity.

Installing aftermarket sunroofs is such a complicated, delicate process that even a brand like Webasto, which is generally well-regarded in this field, has occasionally faced criticism. You can get a good aftermarket installation if you hire professionals to do the job, but many car enthusiasts will tell you just to buy a vehicle with an OEM sunroof and avoid all the risks.

The GMC Canyon doesn’t have or offer the option to add a sunroof, but given the feature’s list of drawbacks, that might be for the best. However, if you already own a GMC Canyon and want to install a sunroof in it for your pleasure or increase your truck’s value, just make sure you follow the advice we’ve given about aftermarket jobs.

If you want to learn more about the GMC Canyon, check out our post on its dimensions by model and trim level. If you’re curious about whether the Chevy Colorado, another GM-manufactured pickup truck, has a sunroof, feel free to read our article on the topic. Thanks for reading!