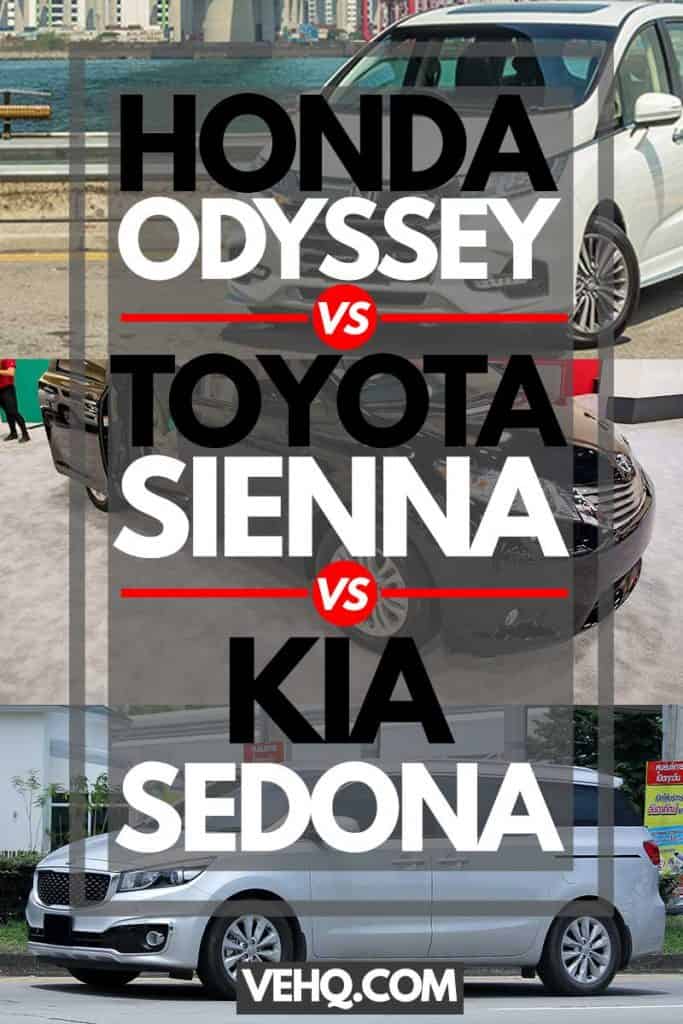 When it comes to minivans, there are precious few options out there, so to help you narrow the field down even more, this article will compare three of the top players: the Honda Odyssey, the Toyota Sienna, and the Kia Sedona.

Generally speaking, the Kia Sedona is the cheapest option of the three, but also the one with lower specs and performance. The Key Differences between the Honda Odyssey, Kia Sedona, and Toyota Sienna are -

Now that we have a general idea of the major differences between these three minivan models, we can dive into all of the specs. In the next sections, we will cover the interior and exterior dimensions, performance, fuel economy, and detailed pricing for all trim levels.

We will evaluate them all on their objective qualities such as interior and exterior measurements, performance, and fuel economy. We sourced our data from the best possible sources - in fact, all specifications were taken from the Honda, Kia, and Toyota websites unless otherwise stated. Highlighting some of the key differences between these minivans should help you make your purchasing decision.

Toyota claims the shortest overall length with its 200.6-inch Sienna (200.3 for the sporty SE trims). Honda, meanwhile, stretches the longest, and Kia lands somewhere in the middle.

While the Kia and Toyota share a 78.1-inch width, the Odyssey takes up .4 more inches across the parking space. Not a huge difference, but still something to consider if you have a narrow garage or frequent tight parking spaces.

Here, all entrants are very similarly-sized, with around 68.5 inches of height. Of course, roof rails will add another 1 to 2 inches to this total. Without roof rails, the Honda Odyssey measures in as the shortest van, while the Sienna is the tallest when equipped with roof rails.

Depending on the trim level and options, the weight of each of these models can vary greatly. Generally, however, we see that the Odyssey weighs 100 to 200 lbs less than its rivals, which carry very similar curb weight ratings. As you will see later, this weight becomes significant in some of the performance tests.

A long wheelbase generally leads to better highway ride comfort while making tight handling somewhat more difficult. Of course, much more goes into those equations than just the wheelbase measurement. Here, we see that the Sedona uses the longest wheelbase, while Honda gives the Odyssey the shortest - an interesting decision for the longest overall vehicle on our list.

While the Toyota and Kia sit somewhere between 6 and 7 inches off the road, anyone needing to clear obstacles very often should avoid the Honda Odyssey, which features a supercar-like 4.5-inches of ground clearance. Perhaps this gives the Odyssey its best-in-class fuel economy, but it could be a hindrance if you regularly drive over bumps, dips, or up steep inclines.

Minivans excel at hauling, thanks to their cavernous interior space. However, all are not created equal in this area, either. In fact, both the Honda and Toyota offer more interior space than the Kia. The Odyssey boasts more room behind the first and second rows, while the Sienna is king when it comes to space behind the third row.

While the Sedona features the most second-row legroom, the Honda Odyssey is the legroom king with the most overall legroom throughout every row. And for anyone who plans on using the third row, the Honda has nearly 2 inches more room than the Sienna and over 3 inches more than the Sedona.

Whether you care about the headroom probably comes down to your height. Tall people are sensitive to low headroom figures because nothing makes you want a new vehicle like scraping your head on the roof liner every time you drive. While all vans give plenty of space in the first and second rows, the third becomes somewhat cramped, especially on the dual moonroof-equipped Sienna.

All three of these vans come with plenty of power from their V6 engines. The Sienna, however, develops the most - 296 horsepower. All that power, however, doesn't come on until 600 rpm higher in the rev range than the others' power peaks. In reality, all of these engines make plenty of power and all figures are within 20 horsepower.

Torque - the ability of the engine to provide twist - is another important factor when it comes to driving. Again, the Toyota prevails, although by just 1 lb-ft, so the two Japanese vans are practically equal. The Sedona, however, suffers on with less torque that doesn't peak until 500 rpm higher than the others.

Zero to 60 times are always fun to look at, even if most minivan shoppers probably don't consider them an important aspect of the vehicle. Even though the Sienna makes the most power and torque, the Odyssey is quicker to 60 by 2-tenths, most likely thanks to its transmission and lighter curb weight. The Sedona is fairly far behind at nearly 8 seconds.

When it comes to braking, there is really no difference between these models with all coming within 2 feet of each other. The Sienna, however, wins the contest with its 123-foot stop from 60 miles per hour.

If you make a lot of tight U-turns, you might want to avoid the Honda. Both other models take about 2 fewer feet to complete the circle; a fairly significant margin.

While the highway mileage of these models varies significantly, with the  Odyssey achieving the highest rating at 28 mpg, the combined ratings are all within 2 mpg of each other. The Odyssey and front-wheel-drive (FWD) Sienna both win the segment with a 22 mpg combined rating. The all-wheel-drive Sienna, meanwhile, achieves the worst score with a 20 mpg combined.

Repairpal uses consumer reports of issues to give vehicles a reliability rating. And you might be surprised to see the results.

The site gives an overall reliability score of 4 out of 5 stars to the Kia Sedona, making it the clear winner. The Honda Odyssey and Toyota Sienna, meanwhile, each earn a score of 3.5. While they trail the Sedona, keep in mind that all of these scores rank these vans above the average vehicle score of 3.2 stars.

Believe it or not, minivans can tow an impressive amount. All are rated to pull 3,500 lbs. That's enough to tow a small travel trailer. For help finding a great small trailer, check out our article discussing some of the smallest on the market.

Most minivan shoppers are quite cost-conscious, and when it comes to upfront pricing the Kia is the clear winner. In fact, it undercuts the Honda by over $3,000. On the top end, the Odyssey Elite trim surpasses all others, with a starting price of over $47,000.

Now that you have access to all of this great objective information about these three minivans, you can decide which one will work the best for you and your family. It can't be denied that all are competent family and cargo haulers, but there are still some differences that can sway shoppers. Sedona's main advantage lies in its lower starting price. The aging Toyota still offers plenty of performance and great fuel economy, while the thoroughly modern Odyssey has the most space, best acceleration, and best fuel economy.