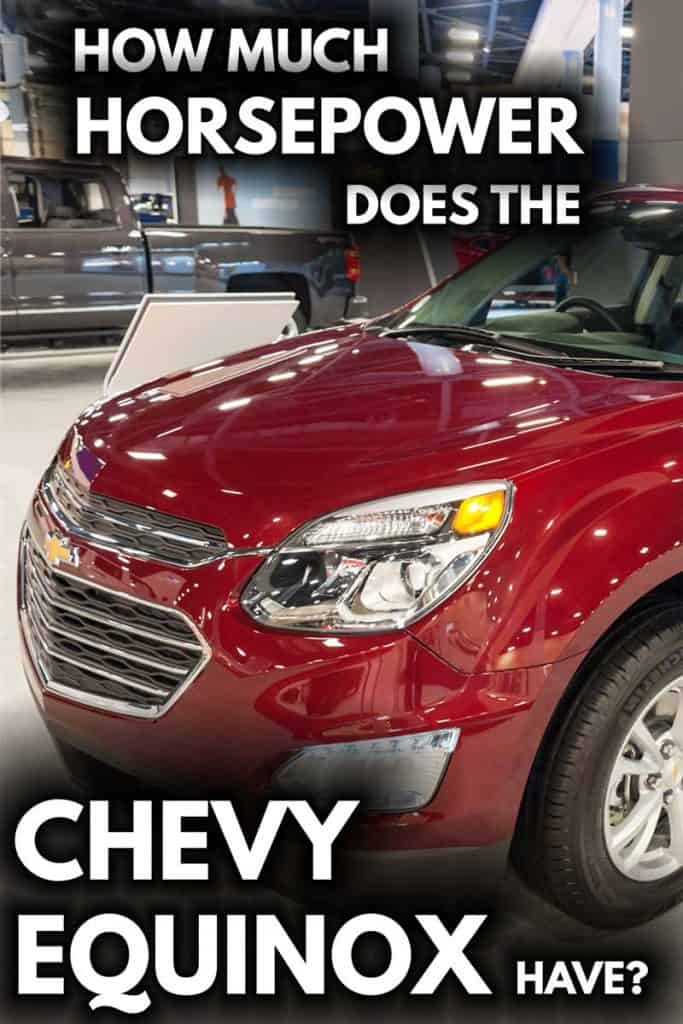 The first Chevy Equinox debuted in 2005, so it's relatively young compared to other sport utility vehicles and crossovers. The 2020 Equinox received a 4.4 expert rating from Kelley Blue Book, so it is reasonably well received. However, drivers want to know many details about an SUV before buying, and one of the biggest questions is: How much horsepower does the Equinox have?

The good news is that it's pretty easy to find the answer. The most basic version of the 2020 Chevy Equinox has 170 horsepower. The U.S. News and World Report attribute this to the vehicle's 1.5-liter four-cylinder engine.

Of course, a single number does not the whole story. There are different factors to consider here, such as:

The Chevy Equinox's horsepower and motor need to be broken down. So we can truly understand how it affects overall performance.

Is the Chevy Equinox Underpowered?

It's fair to say that the most basic version of the Chevy Equinox is underpowered. To put it, 170 horsepower with a 1.5-liter four-cylinder engine isn't all that impressive in terms of current specifications.

Because this is an SUV and not a compact car, the vehicle is somewhat cumbersome. As a result, the horsepower is severely lacking, and the engine can struggle to accelerate to top speeds.

Any driver who's looking for an SUV that can haul moderately sized loads and drive well on the highway might need something more potent than the 2020 Chevy Equinox.

What's even more disappointing is that Chevy did not make a diesel version of the 2020 Equinox. This indicates that there isn't a version of the SUV that has higher torque to compensate for the low horsepower.

Also, 170 horsepower is very low for a modern SUV. The Chevy Equinox lags far behind many of its competitors in terms of pure power. Here's a quick look at some other SUVs and their horsepower to illustrate how behind the Chevy Equinox is:

Even in terms of the Chevrolet family, the Equinox is still one of the weaker models:

The Chevy Trax has 138 horsepower, making it one of the few SUVs out there with a lower strength than the Chevy Equinox.

It's fair to say that the baseline model of the Chevy Equinox is pretty underpowered, both in its own right and when compared to other SUVs.

What Engine Options Does the Chevy Equinox Have?

Drivers will be happy to hear that the baseline model isn't the only available version of the Chevy Equinox. Despite the lack of a diesel option, there are still optional engine upgrades for the Chevy Equinox, so drivers might be able to find something that works for them.

As discussed earlier, the baseline model comes with a 1.5-liter four-cylinder engine. Chevy estimates that this engine gets 31 miles per gallon on the highway. However, again, this is an underpowered engine overall.

There is only one other option for the Chevy Equinox, but it does seem to deliver in terms of performance overall.

Instead of the baseline engine, drivers could choose to go with a Chevy Equinox that has a 2.0-liter turbo engine. Despite the small increase in liters, there is a massive jump in overall performance and power.

The turbo engine has 252 horsepower. This is a significant leap in power over the basic 1.5-liter version. While this doesn't reach the heights of more high-end SUVs and crossovers, it at least brings the Chevy Equinox in line with many of its contemporaries like the Ford Edge.

Beyond the vast improvement in horsepower, the 2.0-liter turbo engine has another benefit: a higher towing capacity than the baseline model. The larger engine gives the Chevy Equinox a maximum towing capacity of 3,500 lbs.

It should be noted that 3,500 lbs isn't all that high of towing capacity, even for a crossover. The Dodge Durango can tow weights above 6,200 pounds. While that makes it one of the top performers in this category, there is a slew of other midsize SUVs that can still tow up to 5,000 lbs.

Can You Increase the Horsepower Of the Chevy Equinox?

Given all the information, the baseline version of the Chevy Equinox has the underwhelming horsepower. The more powerful version has fairly average power for an SUV. Drivers may want to find ways to increase the strength of their vehicles.

For anyone who wants to do this, the Chevy Equinox can be outfitted with performance mods to make it a more powerful vehicle overall.

The easiest way to do this is to use a performance chip. Most Chevy vehicles are compatible with leading chips, so drivers and owners should have an easy time finding a chip to meet their needs. Most chips can help a Chevy Equinox gain at least 35 horsepower, and some may provide an even bigger kick.

There are drawbacks to using a performance chip, however. A microchip will cause the engine to work harder, which means using more gas and lowering the overall miles per gallon while increasing emissions.

Beyond performance chips, Chevy Equinox can be modified to have its engines improved. However, because this is a crossover SUV with a limited performance capacity, few people tend to do extensive work. In this case, it may be easier to go with a more powerful vehicle than trying to modify a Chevy Equinox so it can have the better horsepower.

Does the Chevy Equinox Have Enough Horsepower For Me?

Whether the Chevy Equinox is powerful enough depends on the driver and what they want out of the car. Owners who need something that can accelerate quickly and tow large loads would be better served with another SUV. They should consider finding one that has a more powerful engine with stronger torque.

People who want a reliable crossover SUV could do well to consider the Chevy Equinox. They have to determine whether they will ever need increased performance, or if having a weaker SUV would be fine for them. For instance, anyone who avoids highways and mostly drives in the city could probably be happy with the Chevy Equinox despite its low horsepower.

Horsepower is worth keeping in mind when considering any vehicle, regardless of its intended purpose. Understanding that the Chevy Equinox is an underpowered SUV can help drivers make the right decision. That way, they will not end up in a weak vehicle when they need something that has a more robust performance overall.