If you are shopping for a large passenger or cargo van like the Chevy Express, size is probably an important factor in your decision-making. But, finding the size specifications for vehicles during online research can be difficult. So, we researched all specs of the Chevrolet Express and have the answer for you here.

The length of the Chevrolet Express Van depends on the trim and wheelbase option. The measurements are the same within each wheelbase size regardless of engine spec. Here are the options for the 2021 Chevy Express:

Those are the basic lengths and curb weights for all available options on the 2021 Express van from Chevrolet. Please continue reading to find out more about the available trims of the Chevy Express and their measurements. We will also discuss some of the storage and carrying capabilities of this popular cargo and passenger van. 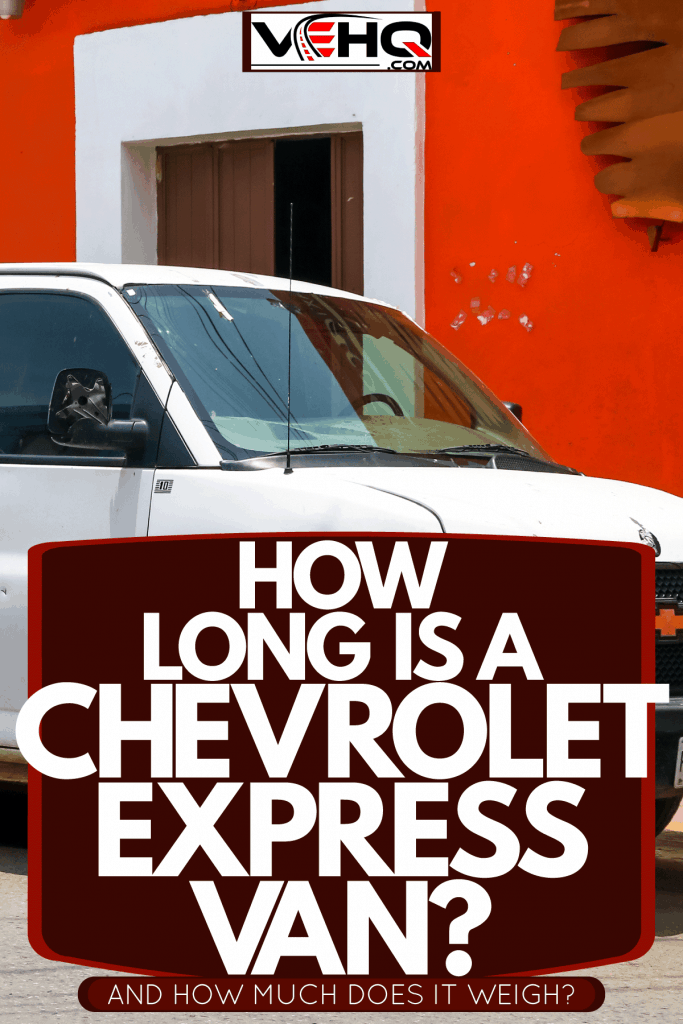 Specifications of the Chevy Express Van

The Express Van from Chevrolet comes in two broad van types, cargo or passenger. From there, the models are either the 2500 or 3500 trim, depending on power capability. The third factor that sets these vans apart is the option to have an extended wheelbase.

Of all of those factors, the type (cargo or passenger) and the wheelbase are the two factors that most influence the van's length. Then, on the other hand, the type and the trim affect the weight. For example, the two lightest van trims for the Chevy Express are the 2500 and 3500 regular wheelbase cargo vans. Neither of those trims has the extra weight brought on by passenger seating or an extended wheelbase.

Overall Length on the Chevy Express

The Chevy Express Passenger version with the regular wheelbase is 223.95 inches long in total. The extended wheelbase also adds 20 inches to the Express, making the overall length 243.95 inches long.

How Long is a Chevy Express 15 Passenger Van?

How Much Does the Chevy Express Weigh?

The Chevy Express weighs between 5261 and 6331 pounds, depending on the version. The cargo version weighs less overall due to the empty interior. The passenger versions are heavier overall because of the additional weight that comes with having 12-15 seats in the back of the van. Additionally, the engine spec, either 2500 or 3500, also adds a little weight to both the cargo and passenger versions.

How Much Weight Can You Put in a Chevy Express 2500?

The Chevy Express is meant to carry a lot of interior weight in either the form of passengers or cargo. So how much weight can the Chevy Express 2500 carry in its interior? The cargo version of the Express provides up to 3280 pounds of payload weight. The passenger version can carry slightly less, but only due to the extra weight brought on by having 12 to 15 seats in the van. That version has a payload capacity of 2550 pounds total.

How Big is the Inside of a Chevy Express Van?

The interior dimensions of the Chevy Express van allow for transporting a lot of cargo of all shapes and sizes. From floor to ceiling, the Express measures 47.9 inches. The floor of the van's cargo area measures 127.8 inches from the back door all the way up to the back of the seats. Finally, the width of the cargo area measures 62.9 inches across for the entire length of the van except between the rear wheel wells. The distance between those wheel wells measures 52.7 inches across.

Altogether, the Chevy Express cargo van has 239.7 cubic feet of cargo volume. The space is the same in the passenger van; it's just that the space on that version is occupied with seating.

Can You Stand Up in a Chevy Express?

The cargo or trunk area in the back of the Chevy express measures 47.9 inches, or nearly four feet, from floor to ceiling. This isn't really enough space to stand up comfortably, and certainly not enough space to stand up straight. But that being said, the four feet ceiling clearance is just tall enough to be able to crouch into the vehicle and load, unload, or organize. In the passenger version, the four-foot clearance is enough for passengers to make it to their seats easily.

The Chevy Express cargo and passenger vans have an average length of 224 inches for the regular wheelbase and 244 for the extended wheelbase. The cargo version of the express van weighs 5374 pounds on average, while the passenger version averages 6108 pounds. Overall, the Chevy Express is a spacious van with plenty of space and power to carry a huge amount of cargo or up to 15 passengers. The options are pretty much endless with what you can do with the space inside the Express.

Is Driving a Van Hard? [What you need to know before you hit the road]

Does a King Size Bed Fit in a Cargo Van or Minivan?