The Sierra is GMC's nameplate for its line of large pick-up trucks. These trucks are among the most popular and best-selling models in the U.S. because of their power, reliability, and luxurious features. If you're considering a Sierra for your new truck, you might be wondering how long it is. We've compiled our research on this topic for your reading pleasure.

The GMC Sierra's overall length depends on the model, the type of passenger cabin, and the choice of pick-up bed. The shortest Sierra 1500 is almost 211 inches long, while the longest Sierra 3500 is over 266 inches long.

Are you curious about the dimensions of the different models and trims of GMC's Sierra pick-up truck line? If yes, then you're in the right place. Do read on, and we will help you understand more about the sizes of these big and powerful trucks. 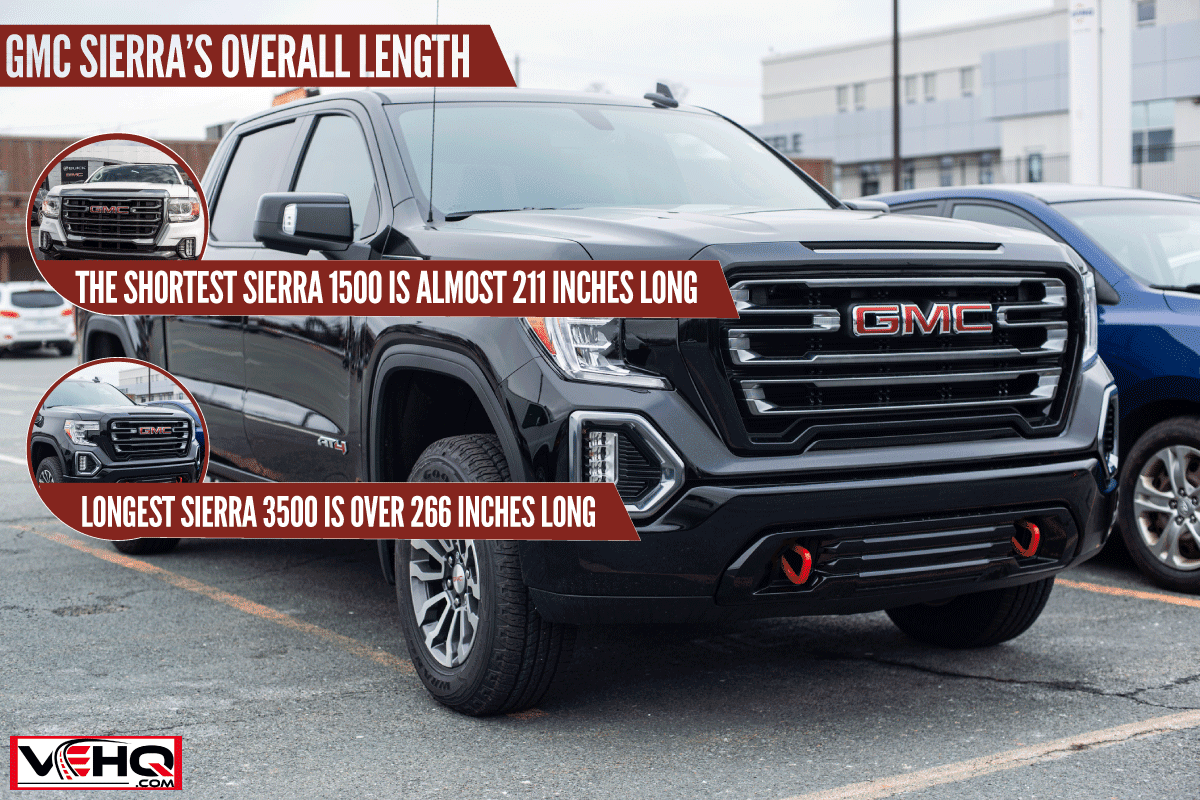 How Long Is A GMC Sierra

Nevertheless, after decades of categorizing specific truck models in such a way, the ton-based classification still persists today. 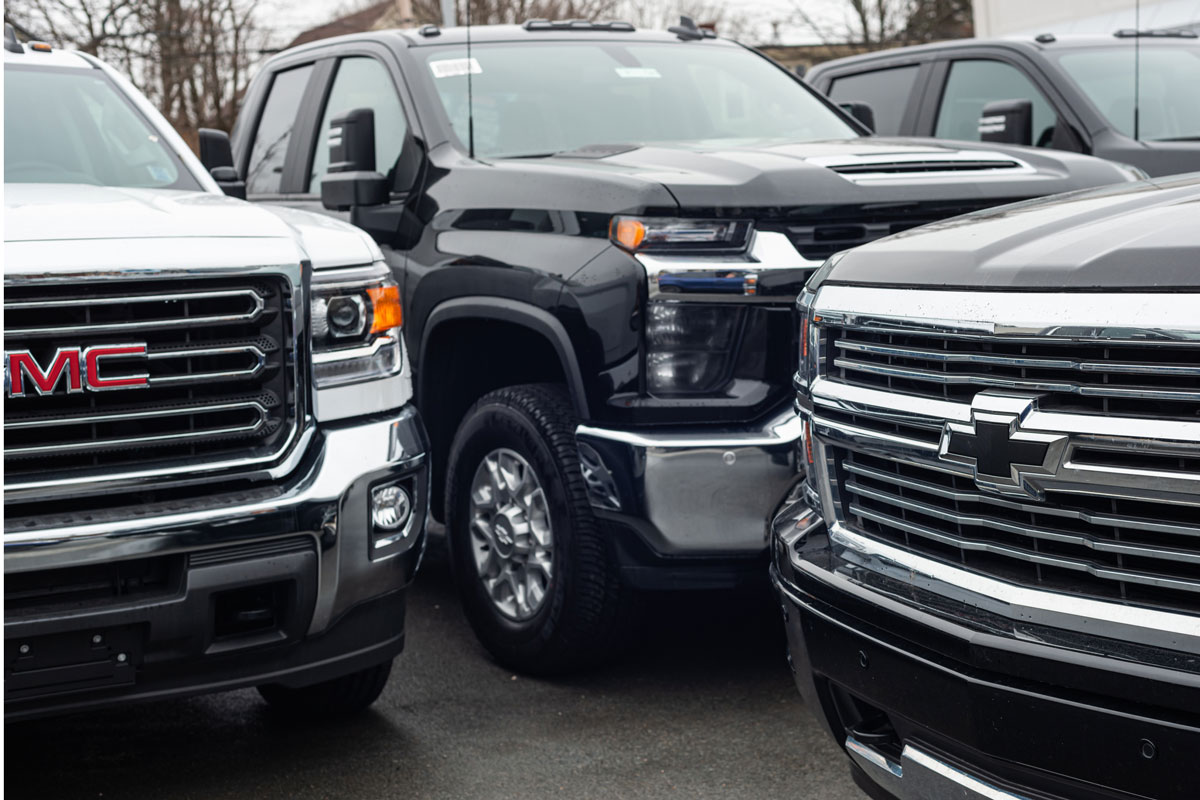 Throughout this article, we will be using standardized vehicle dimension measurements for the GMC Sierra. These measurements will help us compare the Sierra against its competitors, and they will also help us estimate the parking or garage space that we need to allocate for the vehicle.

Overall length is the distance between a vehicle's farthest point in front and back.

The smallest of these large vehicles is the Sierra 1500, which is GMC's full-size or half-ton truck. Its overall length varies depending on the number and type of passenger cabins and the length of the truck bed or "box."

The Sierra 2500 is GMC's 3/4-ton pick-up truck. If the 1500 doesn't have enough grunt and carrying capacity for your cargo or trailering requirements, the 2500 is your next viable choice.

The Sierra 3500 is GMC's 1-ton pick-up truck. The 3500's largest trim comes with dual rear tires that can withstand the extra punishment from heavy loads.

How Wide Is A GMC Sierra? 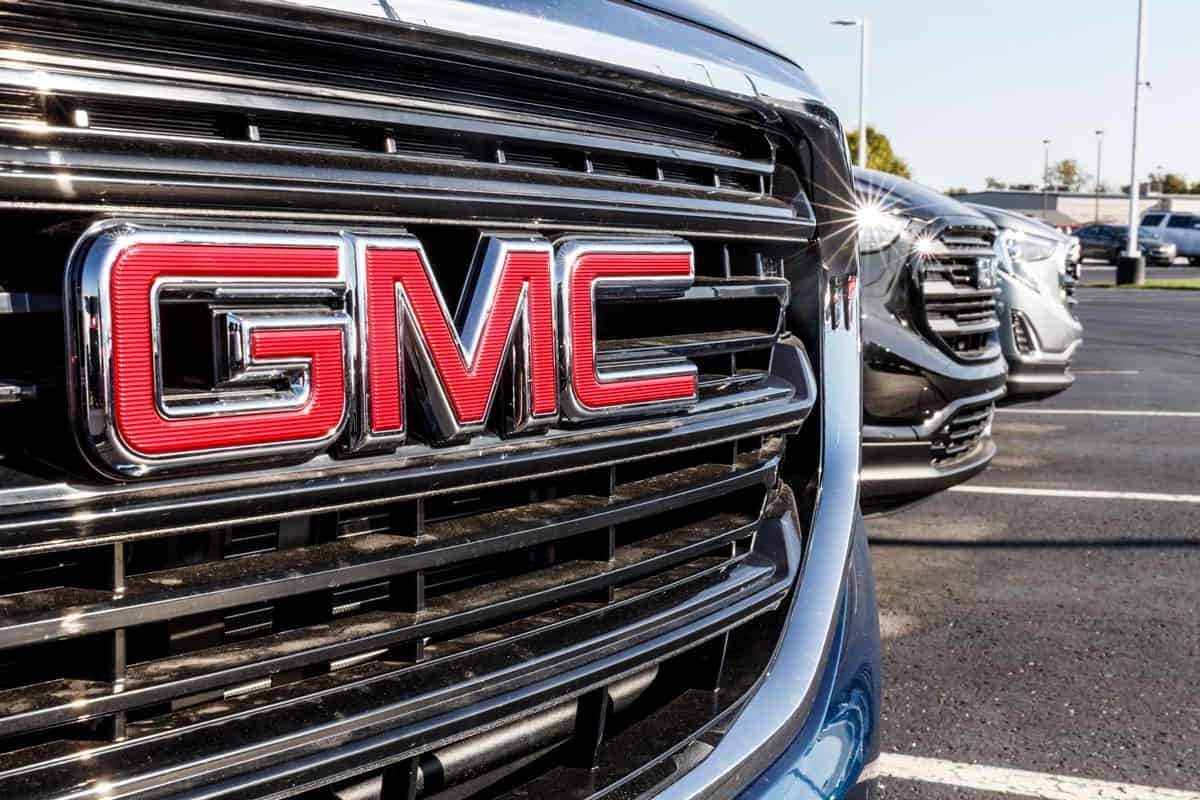 Overall width refers to the measurement of the vehicle's widest point, often excluding its side mirrors or flexible mud flaps if installed.

How High Is A GMC Sierra?

A vehicle's overall height is measured from a flat and non-sloping ground up to its highest point. This measurement usually excludes any antennae, roof rails, or any other accessories installed on the vehicle's roof.

Moreover, overall height measurement is taken only if the vehicle has no cargo and/or passengers. Finally, manufacturers also measure overall height when the vehicle's tires are properly inflated to the recommended pressure.

The U.S. Department of Transportation has two separate classification systems. These systems use (a) vehicle type and the number of axles as well as (b) gross vehicle weight rating (GVWR) of the vehicle.

What Is The Difference Between A Silverado And A Sierra?

At first glance, GMC's Sierra and Chevrolet's Silverado pick-up trucks look very much alike. Why is this so? The answer is quite simple. Both GMC and Chevrolet are owned by a single parent company - General Motors.

GMC and Chevrolet started out as independent American automotive brands. Back in 1918, General Motors merged with Chevrolet. Then, just a quarter of a century later, General Motors also acquired GMC.

Today, aside from these two brands, General Motors also owns Buick and Cadillac.

The current generation of Sierra and Silverado trucks have already digressed from each other's exterior and interior looks. Whereas the Silverado positions itself as a more mass-market workhorse, GMC designed the Sierra as a more luxurious option for truck customers.

Although each truck catered to different target markets, both the Sierra and the Silverado still maintain the same frame and drivetrains.

Finally, both the Silverado and the Sierra belong to what diesel truck aficionados refer to as "Duramax trucks."

What Is A Duramax Truck?

A Duramax truck refers to any of General Motors' pick-up platform truck models that use a Duramax engine. Based on this diesel truck enthusiasts' definition, some of these Duramax nameplates are as follows:

In the Transformers live-action movies, the GMC Topkick was also used as the vehicle basis for the Autobot character, Ironhide. 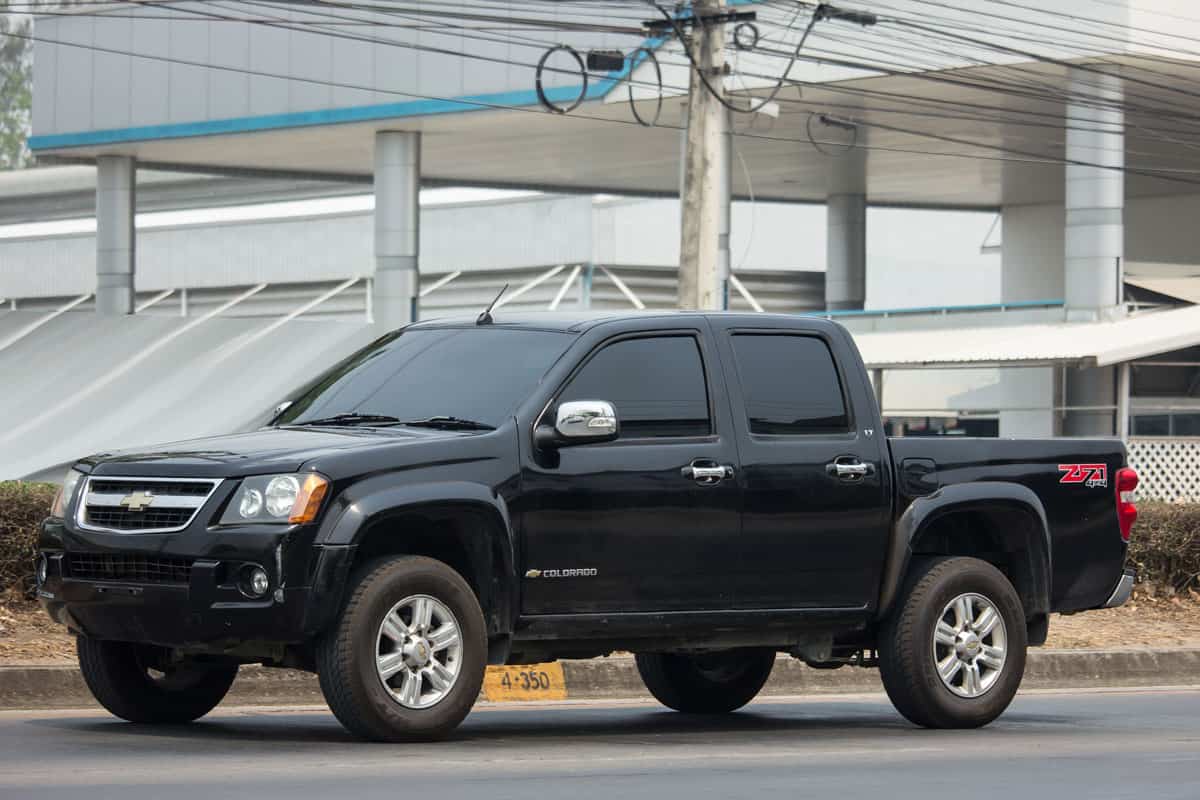 Below is an image of the 2022 Chevrolet Silverado

Back in 1998, General Motors and Isuzu came together and created the DMAX, Ltd. company. Their first mission was to create the first high-pressure common-rail direct injection (CRDI) diesel engine for the U.S. automotive market. The two automotive groups succeeded.

The DMAX company released its first 6.6-liter V8 diesel engine in 2001, and the company baptized it the Duramax LB7. This 300-horsepower, 520 lb-ft engine pioneered several diesel engine technologies and also led the diesel truck engine sales of that time.

Because of this new diesel technology, the Duramax engine helped raise GM's market share in the U.S. tremendously. From a mere 5% in 1999, GM increased its pie share to a whopping 30% by the end of 2002.   Below is an image of the first Duramax engine, the LB7.

After more than 20 years, DMAX Ltd. has already produced twelve different Duramax engines.  These powerful oil-burners had a lineup consisting of four, six, and eight-cylinder powerplants that used inline I or V configurations.

Today, over two million Duramax engines have rolled out of the factory and powered General Motor vehicles.

How Much Is A GMC Sierra? 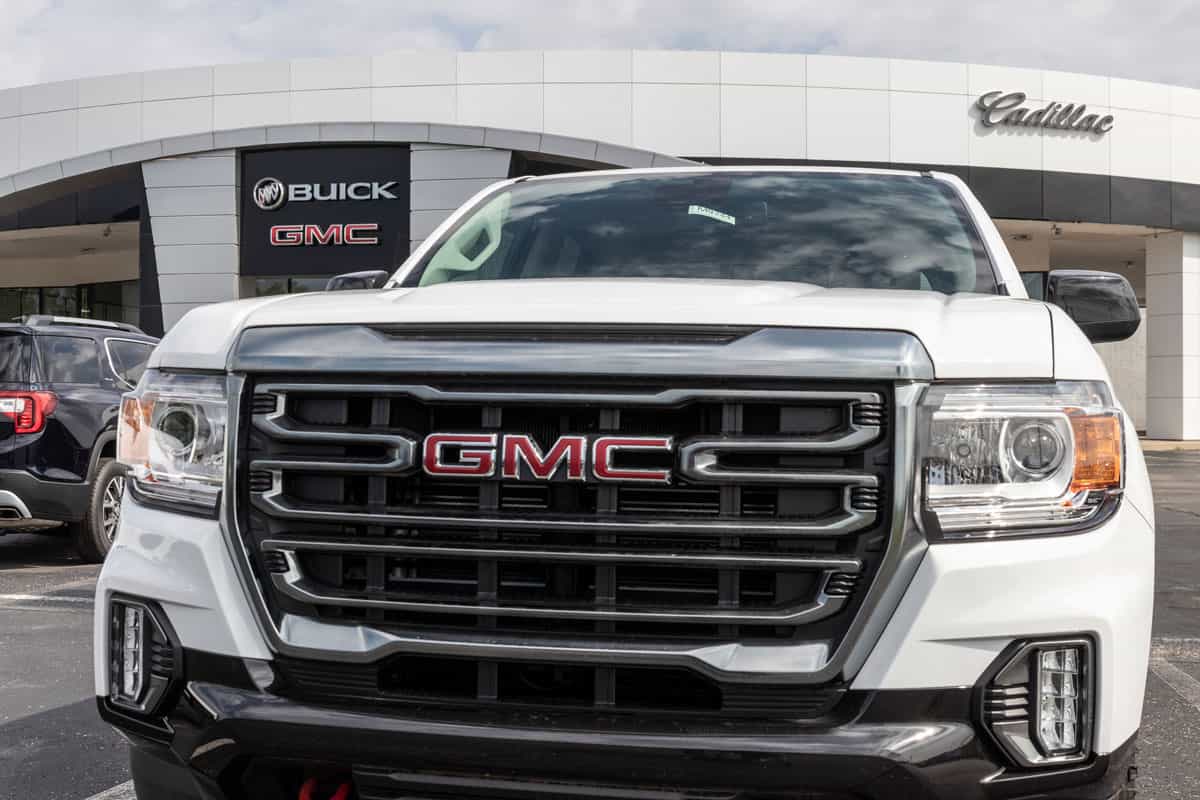 There are as many price points as there are trims for every Sierra 1500, 2500, and 3500 models. However, to give you a better idea of the price range, we will list a few of these price points.

Below are the starting prices of the most affordable trim, a mid-level trim, and a range-topping trim for every model. 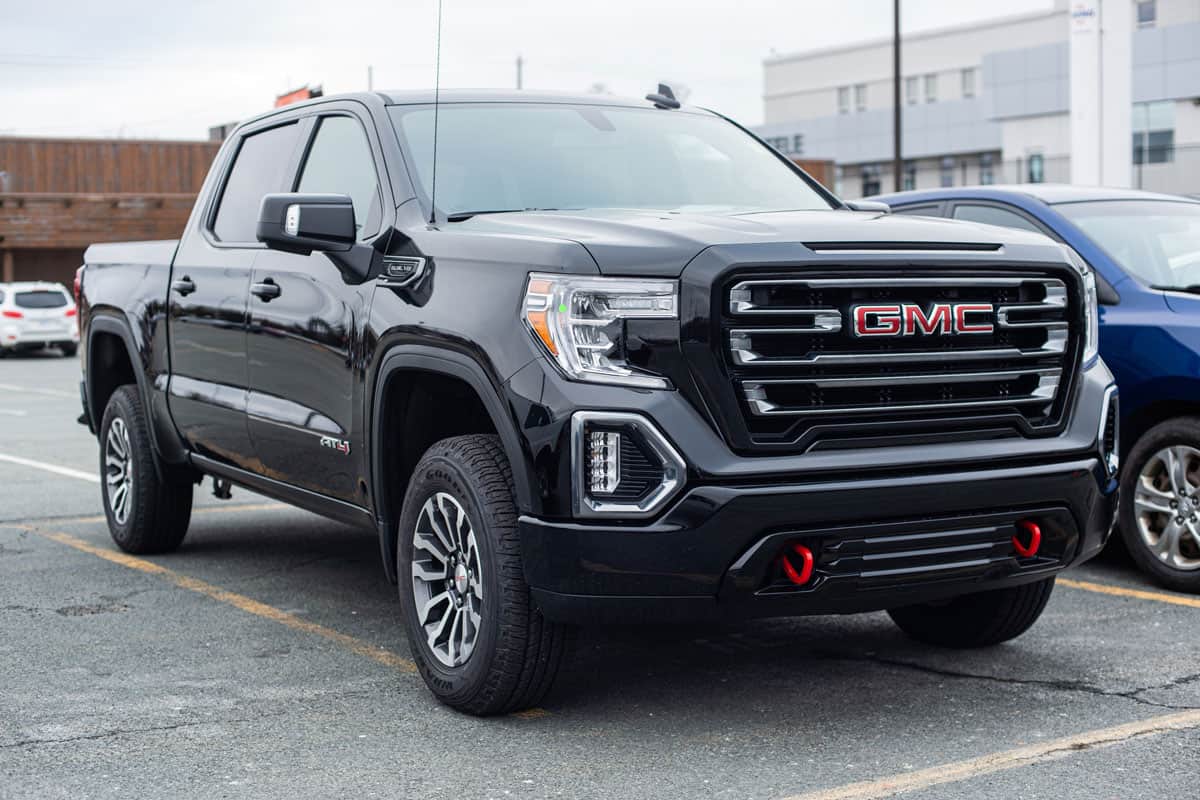 The GMC Sierra's overall length ranges from 211 inches for the half-ton Sierra 1500, up to 266 inches for the bigger 2500 and 3500 models. Aside from the models themselves, the different pick-up cabin and bed types also account for many length variations.

Thank you very much for reading. We hope we were able to help you understand and appreciate more about the GMC Sierra's dimensions and some of its features.

For more interesting reads about pick-up trucks and other automotive topics, you may also want to check out these other interesting topics.

What Is A Duramax?

How Many Gallons Does A Diesel Truck Hold?

How To Keep Transmission Cool When Towing