Since 1997, the Nissan Frontier has been a consistent presence in the midsize pickup truck scene. However, it has garnered a somewhat mixed reputation over the years, and many possible buyers wonder how long they can expect the vehicle to last.

You can generally expect a Nissan Frontier to last up to 100,000 miles, although it’s possible to get 200,000 miles or more out of the vehicle with regular maintenance. However, some Frontier model years are known to have more frequent and severe issues than others, with models from 2005 to 2010 being the worst offenders.

We know that was a lot of information, so we’ll break it all down for you in this post. We’ll discuss the Frontier’s pros and cons, the factors that influence its longevity, the truck’s reputation regarding transmission issues, and what plans Nissan has for the vehicle’s future. Let’s get started! 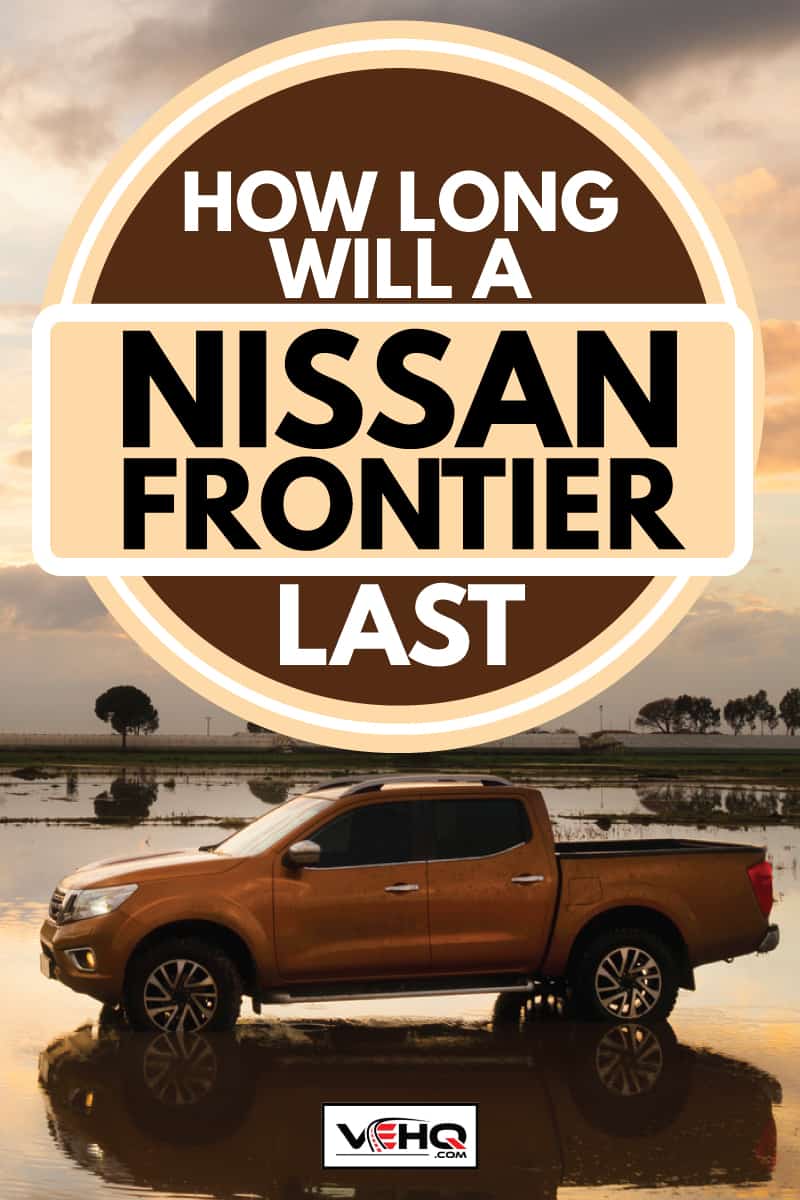 Newer Nissan Frontier models rate highly in terms of reliability thanks to their lower than average annual maintenance costs. Average annual repair costs are usually lower than $500, and the issues that occur are more often moderate than serious. As we mentioned earlier, Frontier models from 2005 to 2010 are known to have severe problems (we’ll discuss them more shortly), but newer iterations are safer bets.

The 2020 Frontier’s weaknesses have less to do with its reliability than with its overall capability. For instance, the vehicle’s gas mileage and towing/hauling capacities are somewhat low compared to those of its competitors. The interior has been criticized both for its antiquated appearance and for lacking perks found in other trucks. Specifically, many reviewers have bemoaned the shortage of infotainment and driver assistance features, as well as little room for rear-seat passengers.

Additionally, the Frontier has a mixed safety record. You’ll find that safety features like Forward Collision Warning (FCW) and Automatic Emergency Braking (AEB) commonly seen in competitor trucks are missing in the Frontier. You can’t even pay extra to get them.

Now that we’ve discussed many of the Frontier’s problems, we should mention the truck is about to undergo a major redesign, which might address some of its most frequent criticisms. We’ll talk more about the Frontier’s redesign shortly.

Does Nissan Frontier have transmission issues?

As we stated previously, there was a period of time when the Nissan Frontier suffered from serious design flaws. In particular, the 2005 model became infamous for its transmission problems. Models from 2006-2010 also received frequent customer complaints regarding the vehicles’ transmissions.

Luckily, Nissan noticed customers’ complaints, and this issue became less frequent, starting with the 2008 model. However, it did still happen sometimes. After 2010 the Frontier’s transmission problems were largely solved, and models released since then haven’t had significant numbers of complaints in this area.

If you’re thinking of buying a Frontier made from 2005-2010, check to see if its potential transmission issues have already been addressed. Better yet, buy a newer model.

Getting 100,000 miles out of a Frontier is usually a safe bet. Of course, how long your truck lasts will depend on how well you maintain it and whether you mostly use it for easy drives with little cargo, hauling huge loads, or anything between those extremes.

Regardless of the strain your Frontier endures, the key to longevity is maintenance. If you stay on top of maintenance, it’s possible that the Frontier will last 200,000 miles or more. A few lucky Frontier owners have reported that their vehicles are still going strong after 250,000 or even 300,000 miles, but it’s best to treat these cases as outliers.

You should always consult your owner’s manual to learn about recommended service intervals. You can also consider general Frontier maintenance guidelines.

We should mention that the 2020 Frontier model saw the truck get a new engine for the first time in years. This engine upgrade marks something of a transition phase for the vehicle ahead of its big redesign coming with the 2021 model. Since the 2020 model only debuted this past spring, it remains to be seen how long drivers can expect the new engine to last.

Is Nissan discontinuing the Frontier?

Nissan isn’t discontinuing the Frontier, but the truck is getting a major redesign starting with its 2021 model. The last time the Frontier got a reworking of this scale was in 2005, and each annual iteration of the truck released since then has made only minor changes to that 15-year-old design. That is, until now. As you can imagine, this news made some serious waves when it was announced earlier this year.

Much remains unknown about the redesigned truck’s specifications. Still, from released images, we know that the new model will have a more box-like frame, less bulky fenders, a new front end that resembles other Nissan vehicles, and a larger 8 or 9-inch infotainment touchscreen on the inside, among other modifications.

Earlier, we mentioned that the 2020 model debuted the new engine featured in the redesigned Frontier. This engine, a 310-horsepower, 3.8-liter V6, comes with a 9-speed automatic transmission. The revamped powertrain marks a sizable improvement from the previous design’s 2.5-liter four-cylinder engine and manual transmission. This upgrade allows for better fuel efficiency, power, and acceleration. As a bonus, the engine runs quietly.

More information will be released on the Frontier’s new design as we approach the 2021 model’s release next year (likely in the spring), so stay tuned for updates. If you’d like to read about the Nissan Frontier’s competition, check out our posts on the Toyota Tacoma and the Ford Ranger.

The Nissan Frontier has had its ups and downs over the years, but it remains a trusted model in the midsize pickup truck market. Now you know about the Frontier’s strengths and weaknesses, how long you can expect one to last, and which model years to avoid. Thankfully, the Frontier’s new redesign suggests an exciting future for the vehicle. Thanks for reading!

A problem I am working to resolve now is a shaking. I already replaced upper and lower A arm joints and the rod end bushings. A stabilizer bar bracket is missing on the driver side front and rear. I'm replacing all of those when the brackets come in.

This truck has been with me since my daughter was born.It saw my mom pass away and been with me thru many experiences of joy and adversity. It's carried countless loads of rock, soil, firewood, compost and horse manure. A True workhorse. I even hit a fallen tree one night and we both walked/rolled away. The radio quit that night. My air doesn't work and it really is nearing the end of it's days.

I told everyone I was going to drive it till the wheels fell off. Nissan makes a damn tough truck.

I would definitely buy another one.

I have had 5 Nissan pickups. The last 3 were frontiers. I put on 0ver 600,000 miles on the 5 and put less than $300.00 in total repairs for all 5 except for the normal oil changes, tires ect. My most recent Frontier (2010) looks like new and rides like new. The power steering is a little tight and the ride is a little rough but it's a truck and I'm more than satisfied. I'm sold on Nissan trucks and will probably buy nothing but Nissan's.