Your vehicle is one of the most important purchases you will make. As one of the most popular and reliable trucks on the market, it isn't surprising that many people consider purchasing a Nissan Titan. We've gone ahead and researched how long the Nissan Titan actually lasts, so you can decide if this truck is a worthwhile investment.

Reaching ten years of use or 200,000-miles is no problem for the Nissan Titan, provided good care. Most owners report getting high mileage on their Titans. Just like any vehicle, the Titan lasts much longer with regular and proper maintenance. It's recommended that you have the engine completely rebuilt after 250,000-miles. 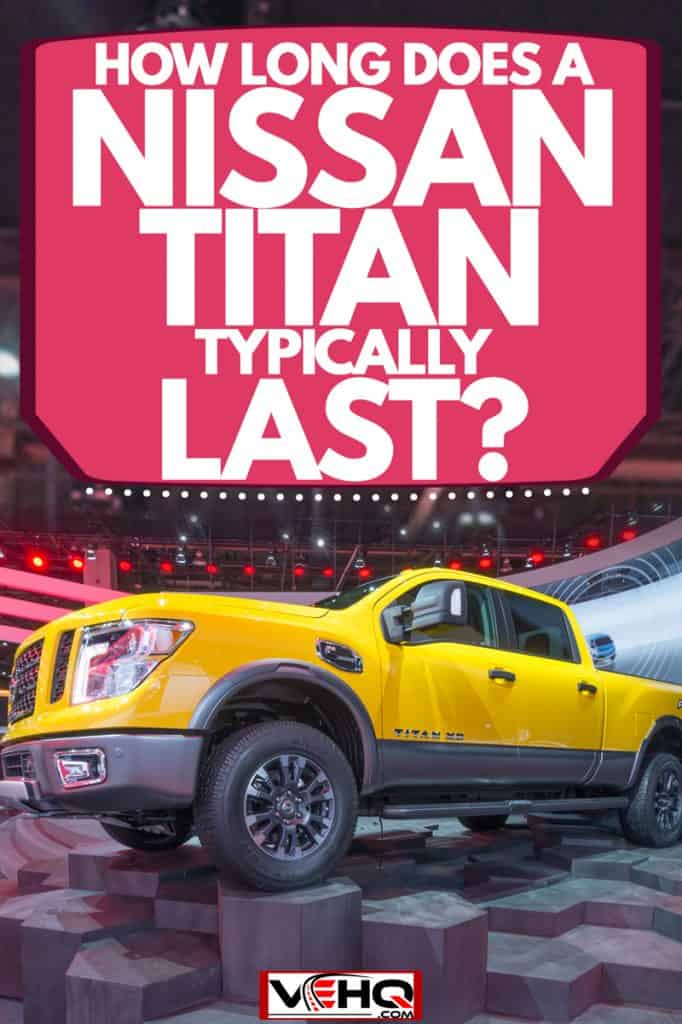 Do Nissan Titans hold their value?

Similar to other full-sized trucks, the Nissan Titan doesn't hold its value well. On average, over five years, it loses nearly half of its value at 45.9%. Among full-size trucks, this isn't the worst, but that doesn't mean it is great.

Prior to 2014, the Titan held its value pretty well. After that year, however, it took a significant dip. The demand for full-sized trucks plummeted, leaving dealers with a higher supply than needed. Combining low demand with newer models outperforming older models led to a significant loss of value of used, full-size trucks.

While this may not be good news if you plan to buy a new vehicle and eventually resell it, it is good news for used truck buyers. Overall you can find great deals for used and older Nissan Titans. Be aware of common issues for older Titans and what kind of maintenance that vehicle has had, or you may be wasting your time and money.

The Nissan Titan is classified as a full-size pickup, but that isn't the only kind out there. If you're interested in what other truck classifications there are, give our article "7 Types Of Pickup Trucks You Should Know" a look.

The 5.6L V8 is a solid engine. As with any engine, it requires proper maintenance, but you can expect it to last 250,000-miles if you take care of it. Even with a good reputation, there are some things specific to this engine to watch out for.

The 5.6L V8 is prone to overheating, especially in earlier models. This can lead to blown or twisted head gaskets.  It would be best if you also kept an eye on the timing chains and fuel pumps, as they can easily fail in less than 60,000-miles. Remember that installing good parts, regular maintenance, and using the right oil can minimize these issues.

Problematic years to be aware for Titan's engine include 2004 through 2006 models. While updates after these model years helped alleviate these problems, they still were among the most reported issues. When buying used, try to keep this in mind and ask for maintenance reports for the vehicle.

For more information on V8 engines, check out our article "What Does A V8 Engine Mean For Pickup/SUV Owners?" If you have questions about engine sizes in general while researching truck models, read through our article "Truck Engine Sizes (And What They Mean For Pickup Owners)."

What are common problems with Nissan Titan?

The Nissan Titan has had its fair share of issues over the years. In some cases, failures in the truck occurred when owners were driving. This led to some crashes and close calls. Thankfully, no fatalities were reported from any of these issues. Curiously though, Nissan has issued very few recalls on any of their truck models.

The Titan suffers from a few different issues in its powertrain. Leaking rear parts, failures in differentials, and clunking noises while reversing were all common. In a few cases, the rear axle of the vehicle broke at high speeds, causing crashes. The worst year for these issues was the 2004 model. Since then, most of these issues have been addressed, but it is important to remember these issues as a buyer-beware statement.

The worst issue with this 2004 model was the rear differential failing. It was most common on models with the 5.6L V8 engine, where the rear wheels would end up locking completely. The average cost to fix the differential failure was over $2,000 and left many owners feeling upset.

Car Complaints has dubbed this the number one problem with the Nissan Titan, which is why it deserves its own section here. While most common in models from 2004 to 2006, rear axle issues persist in Nissan Titans today. There are a few different problems that come up here.

While we have already discussed this problem with the Titan, it also fits in here. Most commonly associated with the 2004 model, rear differential failure caused rear tires to lock up and came with a hefty repair price. On average, this problem occurred around 95,000-miles.

The seals on the rear axles of some older models were prone to loosen around 81,000-miles. If it was caught early, they could be simply repaired; however, if they were allowed to further damage themselves the entire axle would need to be replaced. The most common model for this problem was the 2006 model.

Water can eventually cause corrosion in the connector between the engine and transmission. If this becomes an issue, the engine may crank but not actually start. This damage can also lead to the transmission failing to shift properly. This problem is reported to occur around 115,000-miles. The cost to diagnose a startup issue on a Nissan Titan is generally between $80 and $110.

Another common issue with Titans is overheating the engine. While known as an issue for the 5.6L V8 engine, this problem was not only related to that engine. Overheating engines leads to blown and twisted head gaskets or major engine damage.

If the engine gets hot enough, the pistons can weld themselves into the cylinder they're contained inside. If this happens then your engine is essentially destroyed. Make sure you run proper coolant and drive safely to avoid overheating problems.

A failing fuel pump will cause leaks in the engine. Titan owners have reported damage to the catalytic converter due to a weak or failing fuel pump in multiple model years. This issue has occurred on average, around 100,000-miles. Unlike some other issues on the list, you can catch this issue before any major damage occurs and replace the fuel pump before it completely fails.

Thankfully, most of the Nissan Titan issues have been addressed in newer models and are much less common. It's still important to know the vehicle's history, especially if you're purchasing a used truck.

Nissan offers one of the best warranties available. On Titans, they offer a limited five year or 100,000-miles bumper to bumper warranty. Other dealers offer the same warranty but only up to three years or 36,000-miles.

If you're looking at used vehicles or older models, this warranty isn't important. However, purchasing a new model will help you avoid some common issues with the truck and offer dealer protection on your investment.

You should expect a Nissan Titan to last at least 250,000-miles. While full-size pickups don't hold their value well over time, given the proper care, they are some of the longer-lasting vehicles available. Add in the vehicle's fantastic reliability, and you can see why the Nissan Titan is one of the most popular trucks on the market.

I don't know why someone wrote this not true issuse of Nissan Titan. I am contractor driving Nissan Titan 2005 from brand new, currently miles on the clock is 191.000 miles.Full loaded and pulling 3000 pounds trail every single day, no problems during 17 years.

I have a 2006 Titan, bought it used with about 75K on it. I have not had any of these problems listed above. I have pulled much heavier loads than I should have. it now has 170K on it. was thinking of up grading but now I don't think so. I figure if it has not had any of those problems this article talks about by now, I must be in the clear ... Thanks I think Ill just keep it

@Cesar, I just bought a 2004 Nissan Titan that had 145,000 miles on it in Virginia and moved to Maryland ( 3 1/2 hours away) 5 days after I bought it. Not a single issue or problem on the way and it was loaded with my belongings. Best decision I've ever made! Love my truck!!

I completely agree, I bought a Nissan Titan 2005 with 114k miles on it, and I am almost always hauling or towing with it. Now has 185k miles on it. Never has had a single issue. My most recent trip was from California to New York and back. Came back from a New York with a heavy duty trailer and small tractor on it. 5k+ miles in 6 days and not a single complaint or issue. No overheating or mechanical failure. Plus excellent handling and plenty of power.