A vehicle is one of the biggest purchases you will make, so it is no surprise most people's priority is making sure they find a car that will last them a long time. The Chevy Colorado is one of the most popular trucks on the market, and we are going to tell you all you need to know about its reliability and lifespan. We have researched this topic extensively and compiled all the information you will need to learn how many miles a Chevy Colorado will last.

If properly maintained, you can expect a Chevy Colorado to last anywhere from 250,000 to 300,000 or more miles with most original parts. While this is an estimation, you should expect to get 200,000 miles at the very least. Most owners report getting significant mileage out of their Chevy Colorado. 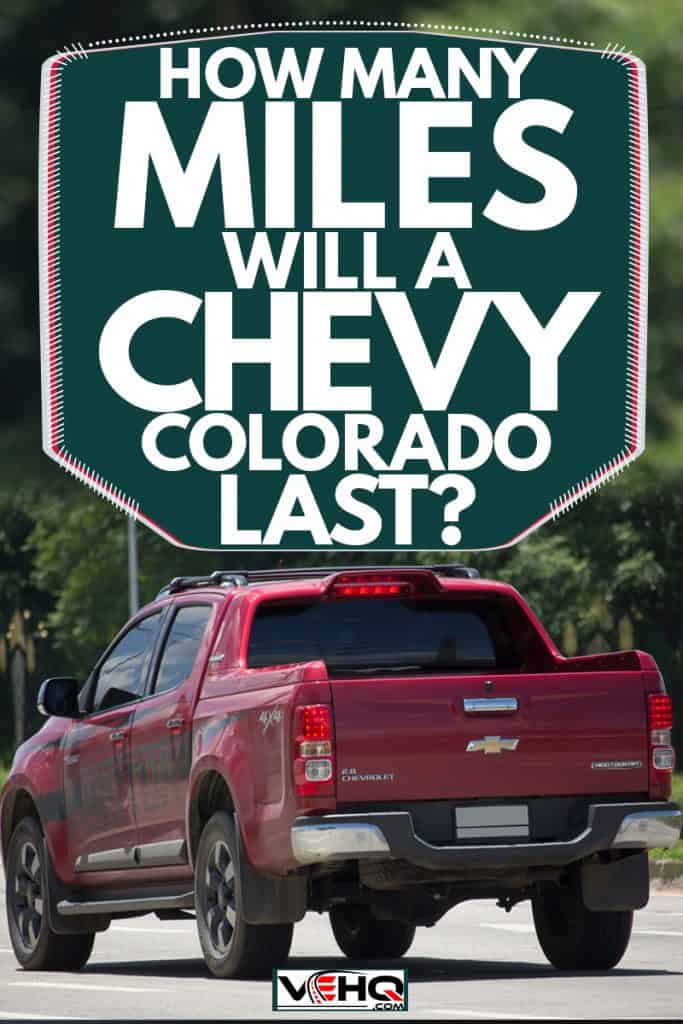 Is The Chevy Colorado Reliable?

Yes, Chevy's Colorado truck scores relatively high in most reliability reports across the internet. Let's take a look at what consumer reports have to say about this vehicle.

RepairPal gives the Colorado a 4 out of 5 stars reliability rating. More specifically, the frequency in which repairs are required is fairly low. You can expect repairs to be few and far between, especially in the early years of the truck. The average repair cost per year for a Chevy Colorado is $599, which is lower than the average for all vehicles, which is right at $652. This means the cost of ownership for a Chevy Colorado is more likely to be less costly than other vehicles.

Cars.com gives the Chevy Colorado 4.5 out of 5 stars for reliability in their consumer reviews, provided by owners using this truck daily. These ratings are trustworthy as consumer reports are often unbiased, having nothing to gain or lose from giving their honest opinions. The 2020 Chevy Colorado is much more reliable than its previous models, which means Chevy decided to perfect this truck's reliability and consumers are noticing.

The J.D. Power Company gives the Chevy Colorado an 81 out of 100 in reliability, which they call "great." According to their website, it ranks 4 out of 5 on their top five mid-size trucks list. This makes Chevy's Colorado one of the top-performing vehicles in terms of reliability. J.D. Power Company measures reliability based on everything from defects straight from the factory to malfunctions in the engine or infotainment system. J.D. Power leaves no stone unturned to provide an in-depth rating.

Does Chevy Colorado Hold Its Value?

Absolutely. Certain vehicles, such as sedans, lose quite a bit of their value as the years go by. Trucks, on the other hand, are known for retaining an incredible amount of value. The Chevy Colorado is no exception. In fact, MotorBiscuit says the Chevy Colorado has a surprising resale value. Its overall depreciation rate, according to MotorBiscuit, is 28.8% after three years, which is in the top three among all trucks for holding their value.

Chevy Colorado's reliability is also a contributing factor to its value retention. In other words, because the 2020 Chevy Colorado is reliable, it also holds its value quite well.

Fremont Motor places the Chevy Colorado at #8 on the list, "Top 10 Vehicles That Hold Value The Most." According to their sources, most cars depreciate anywhere from 15% to 20% each year. Given the Colorado's average deprecation of 28.8% after three years, that is well under the average at just 9.6% per year.

What Is The Best Engine For Chevy Colorado (And How Many Miles Will It Last)?

Chevy offers three different engine configurations for you to choose from. They offer a 2.5L cylinder engine, a 3.6L V6 engine, and a 2.8L Duramax Turbo-Diesel 4-cylinder engine. Each of these engines is meant to perform certain tasks better than others. For example, a 2.5L engine will get better fuel economy than the 3.6L V6. However, the V6 will allow for faster performance. This means choosing the best engine will depend on your wants and needs.

However, McCluskey Chevrolet argues that the Duramax Diesel is the best, all-around engine in Colorado for many reasons. For one, diesel engines are known to last a lot longer than gas engines. Propulsion Controls Engineering's website says Duramax is one of the most reliable diesel engines on the market. They also say you can expect the engines to last anywhere from 400,000 to 500,000 miles!

You can also expect to get more miles per tank with a diesel engine compared to a gas tank. The only considerations are that the Duramax engine costs more than traditional gas engines and will spend more on fuel as diesel costs more than gas.

How Do I Ensure My Truck Lasts As Long As Possible?

Ultimately, a Chevy Colorado will last as long as you decide. If you maintain your vehicle regularly, you can expect to get a full life out of it. If you disregard oil changes, tune-ups, and other necessities, your Colorado may last a much shorter time.

To make sure your truck lasts as long as it is designed to last, you need to do a few things. First, you must make sure you regularly change the oil and filters and rotate the tires. You can do this yourself if you have previous experience, but we always recommend taking it to a professional. On top of that, a professional will diagnose any problems you may encounter and fix the problem before it gets any worse.

Next, you should have your vehicle regularly inspected at least twice a year. This will ensure you attend to any developing issues early yet continue to maintain other fluids and parts that need consistent care.

By following these steps, you can prolong the life of your Chevy Colorado and extend the number of miles it will go in its lifetime.

All in all, the Chevy Colorado is a phenomenal mid-sized truck and should last an average of 250,000 miles or more if properly maintained. Because Chevy Colorado is reliable, it also holds its value well, which makes it a great truck to purchase. The Colorado ranks among the best trucks in the world and deserves all the praise it receives. Chevy Colorado is an extremely dependable truck.