Whether you want a passenger van to carry a large crew for a job or need one to shuttle friends around on a night out, knowing the seating capacity is vital. There are many makes to choose from, and selecting the one that suits your needs the best requires a bit of research. Knowing how many it will seat is a big consideration should you take interest in the Nissan NV. We researched this van from numerous professional sites so that you will have a definitive answer.

The Nissan NV Passenger Van will hold up to 12 adults. The number will vary depending on how you configure the seating. The most common configurations are for:

If you are considering the Nissan NV Cargo Van, it will only seat a maximum of 2 riders, as it only has seating for the driver and one front passenger.

Now that we know the different seating configurations for the Nissan NV, we'll take a closer look at each one. You might also be wondering if the NV's seats fold down, or how the seats can be removed safely. For the answers to these questions and more, read ahead in this post to see what we've discovered. 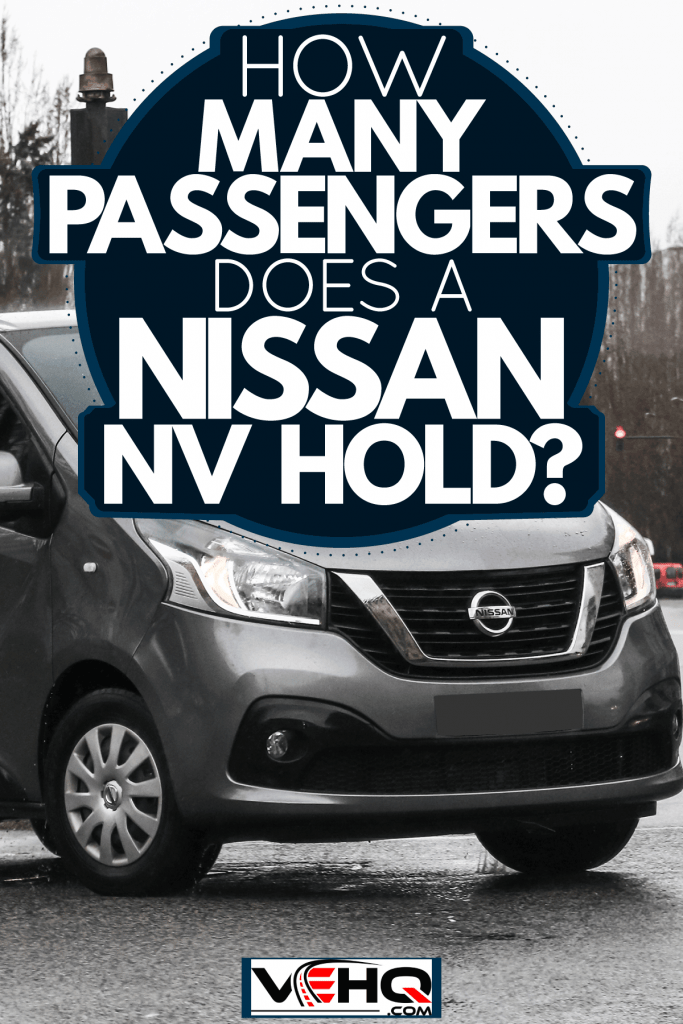 Seating configurations for the Nissan NV

This base configuration is how the Nissan NV is set up when you take possession of your new van. With all of the seats in place, the NV will hold a driver and front passenger, three passengers in the second and third rows, and up to four passengers in the fourth row.

There is still plenty of room for cargo behind the fourth row of seats with the seats configured in this fashion. This cargo hold is accessible via the rear doors.

If you need to carry a lot of cargo, you can remove the seats entirely. This will allow for only the driver and front passenger to be aboard. This configuration will open the rest of the NV to its maximum cargo hold of 218.9 cubic feet.

If you don't need all of the seats, you might consider removing the passenger-side seats from the second and third rows. This extra space will whittle your passenger load down from 12 to 10, but it makes it so much easier to enter and exit the NV via the sliding rear passenger door.

Room for 8 passengers and more cargo

Should you have the need for a lot of riders and a lot of gear, the seats of the NV can be configured to suit this need. Remove the fourth row of seats to open up the rear cargo hold. This cuts your passenger load down from 12 to 8.

Whether you need to haul a surfboard, kayak, or another long item, you can still do so with the NV without losing too much seating. Removing a single passenger side seat from rows two and three and two passenger seats from row four will allow you to accommodate hauling items that are up to 10 feet in length. And you'll still have room for 8 passengers.

For a bird's eye view of all of these configurations, you can view them here on the Nissan NV official site.

What kind of seats does the Nissan NV have?

The Nissan NV comes with gray cloth seats. For resistance to normal wear and tear, these seats are reinforced with side bolster wear patches. As a bonus, the seats are also coated with a water-repellent material.

Does Nissan have a 15 passenger van?

Currently, Nissan does not manufacture a van that will accommodate 15 passengers. While you might be able to squeeze more people into the NV than the 12 it was designed for, it is not recommended that you do so. Hauling more than 12 riders poses some serious safety concerns, as there will not be safety belts for every passenger if you exceed 12.

For additional safety information for the Nissan NV, please refer to your owner's manual.

Do the Nissan NV seats fold down?

The seats in the Nissan NV do not fold down. However, they can recline, which adds to the base level of comfort for your passengers on long trips.

How do you remove seats from a Nissan NV?

At some point, the need to remove some or all of the seating from the Nissan NV will arise. You can do this in a few simple steps. For ease of removal and safety reasons, it's best to remove the seating with at least one other person present.

For a thorough video tutorial on safely removing the seats from a Nissan NV, watch below:

Which passenger row seats are removable in 2021 Nevada?

What's the number of passengers in competing models?

Are you looking for a passenger van that might hold more than 12 riders? Let's look at other popular models to see if any will accommodate your needs.

This model passenger van from Ford will carry 12 individuals on board. However, you have the option of getting an extended body style. Doing so will add an additional row of seating, making it a 15 passenger van.

The Chevy Express passenger vans also come in two options. One will accommodate up to 12 riders, while a longer frame style will allow for up to 15 people.

Dodge's cargo van can be built out to suit a variety of needs. While it doesn't have the rear seating that most passenger vans have, it does have a cargo hold that is automatically larger without removing any seating. Depending on your passenger load needs, this van can be configured to hold up to nine. The base model only has seating for five.

Mercedes Benz's Sprinter will hold a maximum of 15 passengers. With all-leather upholstery and reclining seats, this is definitely the most luxurious of the passenger vans we've highlighted in this post.

The Nissan NV is a great choice for a passenger van if you're looking for one that has a wide range of seating configurations and available cargo space. Those options, combined with the reasonable price point and the longevity of the mechanical components, continue to make the NV a popular choice among consumers who use passenger vans.

Do Nissan NV Seats Recline Or Fold Down?