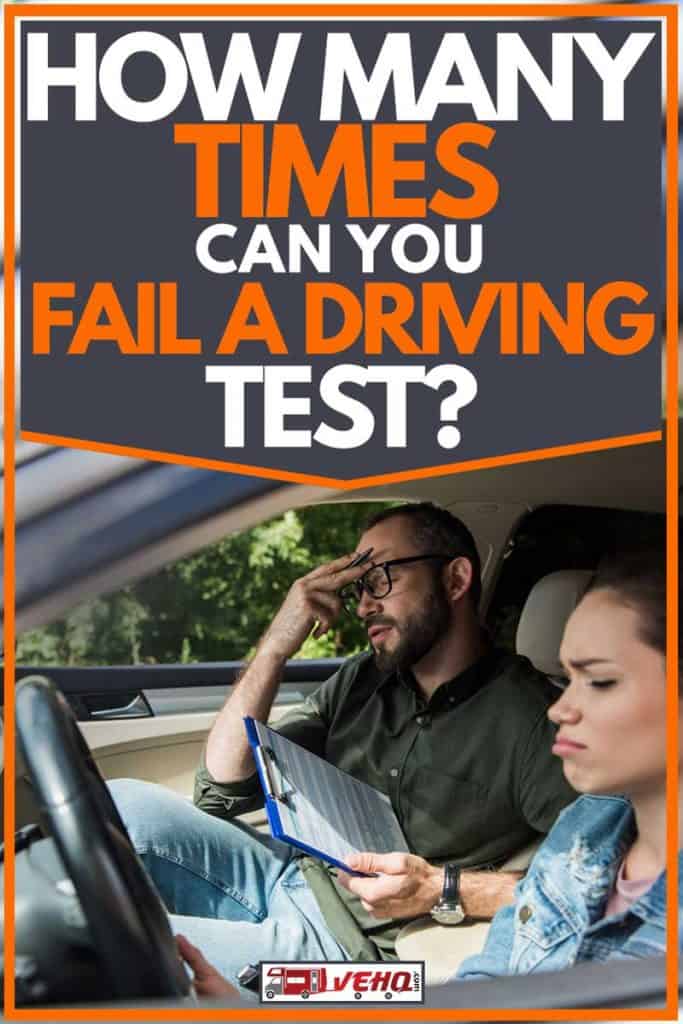 Passing the driving portion of a driver’s license test is a daunting challenge. Of course, we’d all like to pass on our first try, but sometimes things don’t go as planned. If you don’t pass your first driving test, however, don’t fret. Most states will allow you to take a few retests before you have to re-apply for a learner’s permit.

Although the laws vary across the USA, most states allow you to take your driving test at least three times before you must re-apply for a permit. Here are the max retest limits in the nation’s most populous states:

For more details on these testing limits, be sure to look through all the info presented below. After explaining the laws in these five states, we’ll go over a few interesting FAQs related to the driving skills test.

How Many Times Can You Fail A Driving Test? – Info From Five Big States

In this first section, we’re going to focus on the laws for re-taking driving tests in America’s five most populous states. If you need more specific information on the testing procedures where you live, we recommend visiting your state’s official DMV webpage. You could also check out the DMV USA website for useful info on every state’s DMV branch.

Californians can take their driving test a total of three times before they are required to fill out a new driver’s license application. California also charges a $7 fee for each of these retests.

Please note: drivers under the age of 18 who fail the CA driving test will have to wait at least two weeks before they schedule a retest. This two-week interval doesn’t include the initial testing day.

For more detailed info on passing California’s driving test, you could read through this driver’s handbook put together by the state’s DMV. California’s DMV also has a helpful FAQ page all new drivers in the Golden State should check out.

Learn what happens if your license expires!

Just like California, Texas allows applicants three tries on the state’s driving test before applicants must resubmit their driver’s license application. All three of these tests are included in your initial application fee. One caveat to keep in mind, however, is that the two retests must occur within a 90-day window following your first test.

Unlike California, Texans have the option of rescheduling their next test whenever they’d like. Just be sure you fully understand why your examiner failed you before rushing into a retest.

For more tips on acing the Texas driving test, feel free to check out this brochure published by the Texas Driver License Division. To schedule a driving test in the Lone Star State, please visit this website put together by the Texas Department of Public Safety.

Residents of Pennsylvania also have three attempts to ace the Keystone State’s driving test before they are required to renew their learner’s permit. There’s no additional fee attached to any of these retests.

Anyone who’s younger than 18 when they take their driving test will have to wait at least seven days before retesting. Those who are over 18, however, can take their retest as soon as one day after their initial exam.

For more detailed information on Pennsylvania’s driver’s license test, click on this link to this PennDMV FAQ webpage. You could also find Pennsylvania’s online driver’s test scheduling login on this site.

According to New York State’s website, you are granted two complimentary driving tests as part of your application fees. Those who fail both of these tests will need to pay the state $10 for every two additional road tests.

The only time the Empire State will restrict your right to a driving test is after your learner’s permit expires. Once this happens, you must resubmit your application for a learner’s permit to the state.

For more info on New York’s driving test procedures or to schedule an appointment, be sure to visit this New York DMV webpage.

People who live in the Sunshine State can take driving tests five times before they will be asked to re-apply for a learner’s permit. Per the Florida Highway Safety And Motor Vehicles (FLHSMV), one driving skills retest now costs $20.

Florida has many different classifications for their licenses, but the standard non-commercial driver’s license is listed as “Class E.” For those who are interested, here’s a full list of Florida’s license classifications on FLHSMV’s website.

You can find out more about Florida’s driving test on this link put together by the FLHSMV.

Is It Normal To Fail A Driving Test?

People who’ve just failed their driving test shouldn’t be too hard on themselves. Although you might feel all alone at the moment, the reality is many other people are in the same exact boat…or "car."

How Many Errors Can You Have In Your Driving Test? 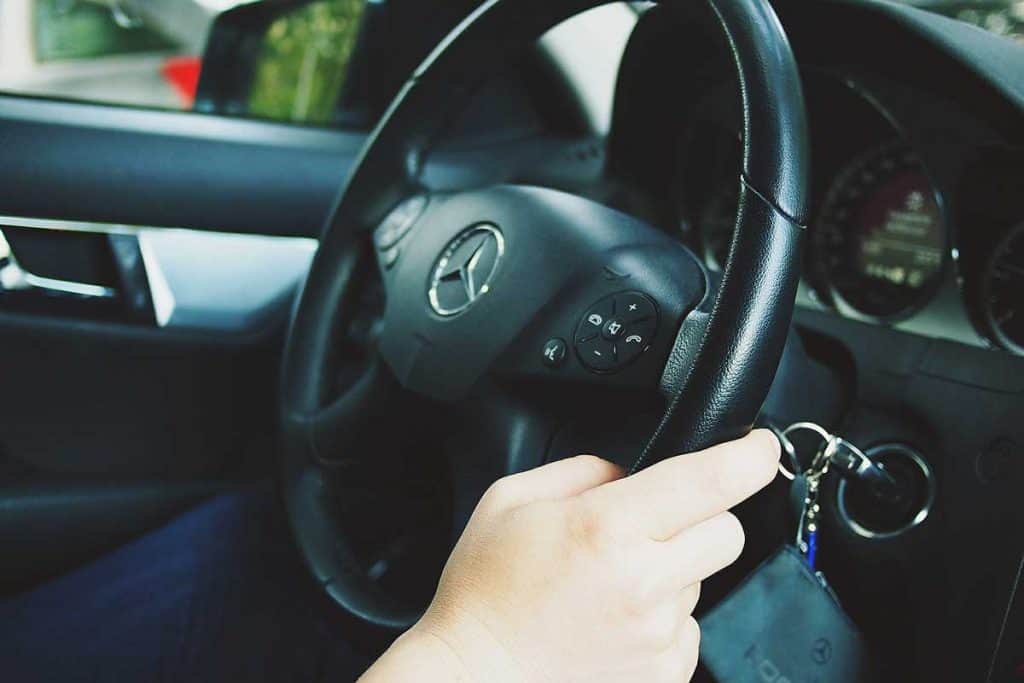 Every state has a different number of errors that are allowed in a driving test, so it’s difficult to say how many would be allowed in your region.

The important thing all drivers need to keep in mind, however, is that not all errors are created equally. The types of mistakes you make are often far more consequential than how many errors you make.

It’s a good idea to figure out what constitutes a critical error and an immediate fail with a driving instructor in your state. You could also look on your state’s DMV page to get further details on the distinctions between these errors.

Be informed about how much does it cost to go to driving school.

What Mistakes Will Cause You To Fail The Test?

Here are a few common immediate fail errors that will instantly disqualify you from obtaining your driver’s license.

Can You Fail A Driving Test For Going Too Slow?

Driving too slow is often considered a critical error, so it could be a determining factor in whether you pass or fail your exam.

Believe it or not, driving too slow could create a higher chance of traffic collisions than driving too fast in certain scenarios. Determining the ideal speed in your area requires a fair degree of situational awareness.

Posted speed limits can help give you a general idea of how fast to go, but they shouldn’t be followed too strictly. For instance, it’s appropriate to slow down in school zones or in inclement weather. It’s not a good idea, however, to drive below the speed limit on highways.

If you still have questions about when it’s appropriate to slow down, don’t hesitate to ask a qualified driving instructor before your exam.

Do Driving Examiners Fail You On Purpose?

Yes, many driving evaluators are strict, but that’s a part of their job. Whoever is testing your driving abilities should only be concerned with how safely you conduct yourself on the roads.

If you didn’t pass your driving exam, then your examiner will tell you all of the specific reasons s/he gave you an unsatisfactory score. Be sure to take advantage of this opportunity and ask how to improve your skills for a future test.

There’s Always Another Chance For Your Driver’s License

Please don’t get too discouraged if you’re struggling to pass your driving test. As you could see above, most states offer at least three retrials before you have to re-submit your learner’s permit application. There are also many fantastic resources on and offline to help you obtain that coveted driver’s license.

In addition to working with a driving instructor, you should look through your state’s DMV website for the most up-to-date information on driving safety standards. With plenty of persistence, practice, and patience, you will obtain your own driver’s license in no time.

Can You Turn The Key Off While Driving?

How to Drive on Ice (Tips That Could Save Your Life)

What is a Clean Driving Record (And How to Get Yours)