Are you planning to transport a 350 engine, and you’re wondering how much it would weigh? You’ve come to the right place, for we have researched this question, and we have the answer for you.

The weight of a 350 engine depends on the manufacturer because different manufacturers have their own versions of the 350 engine. Check the most common 350 engines below and their corresponding weights:

Learn more about the different 350 engines in the succeeding sections. We even included sections on how to get more out of your favorite 350 engine. Read on! 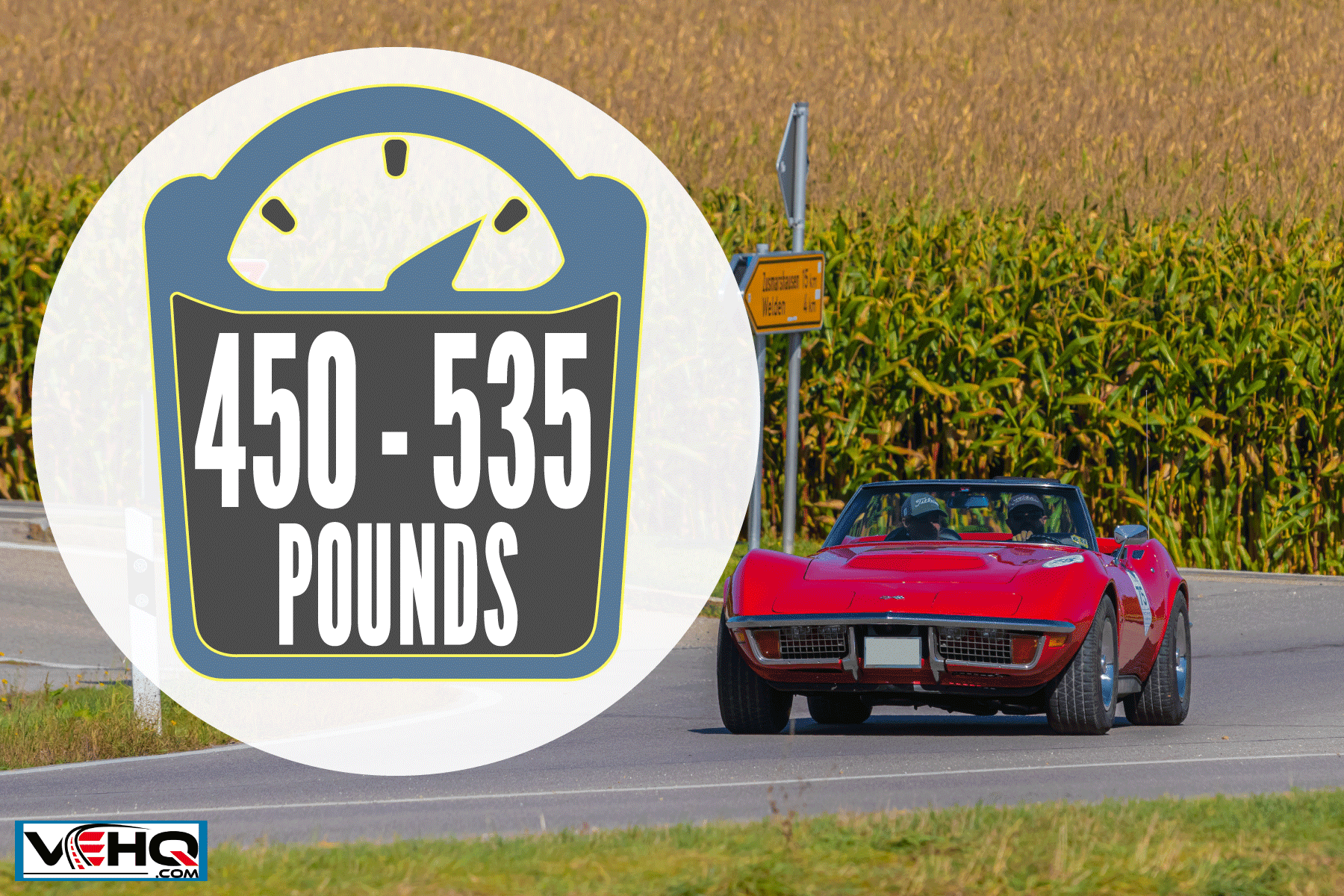 An Introduction To The 350 Engine

350 engines got their name from having a total capacity of 350 cubic inches. This total capacity can be filled with air and fuel for combustion. Most 350 engines are commonly V8 engines that can be small block or large block V8 variants. 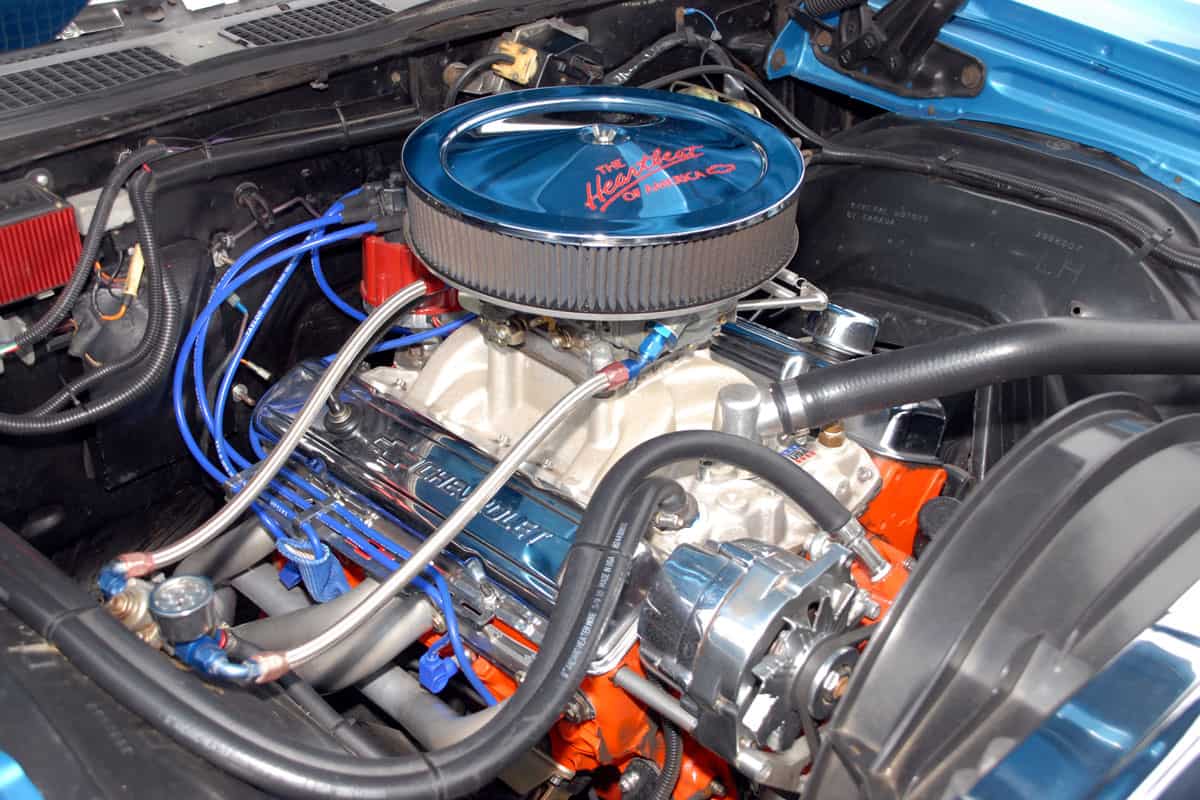 Since a 350 engine can either be a small block or a large block engine, there is no standard weight for 350 engine builds. The total weight depends on the manufacturer that designed the engine and largely on the type of metal that was used to make the engine block.

Small block V8s were first developed by Chevrolet in 1944 as 256 cubic inches, or 4.3-liter, engines. By 1967, small-block V8s had evolved into powerful 350 cubic inch engines for vehicles like the Chevrolet Camaro.

The Chevy 350 engine went on to power almost everything from the Corvette to the Caprice and many Buick and Cadillac models. Oldsmobile cars and vans offered the 350 V8 as an optional upgrade to the models that do not have it as a standard engine.

The Chevy 350 engine became available in fuel-injected versions beginning in 1985. Cars with this engine continued to use a four-barrel carburetor.

Besides its reputation for durability, quiet operation, and performance, the 350 has a variety of useful applications, including providing power for boats. It quickly became one of the 20th century’s best engines.

The huge amount of available aftermarket parts that enthusiasts can choose from makes it arguably the most popular of all the 350 engines of its era.

Specs Of The Chevy 350 Engine 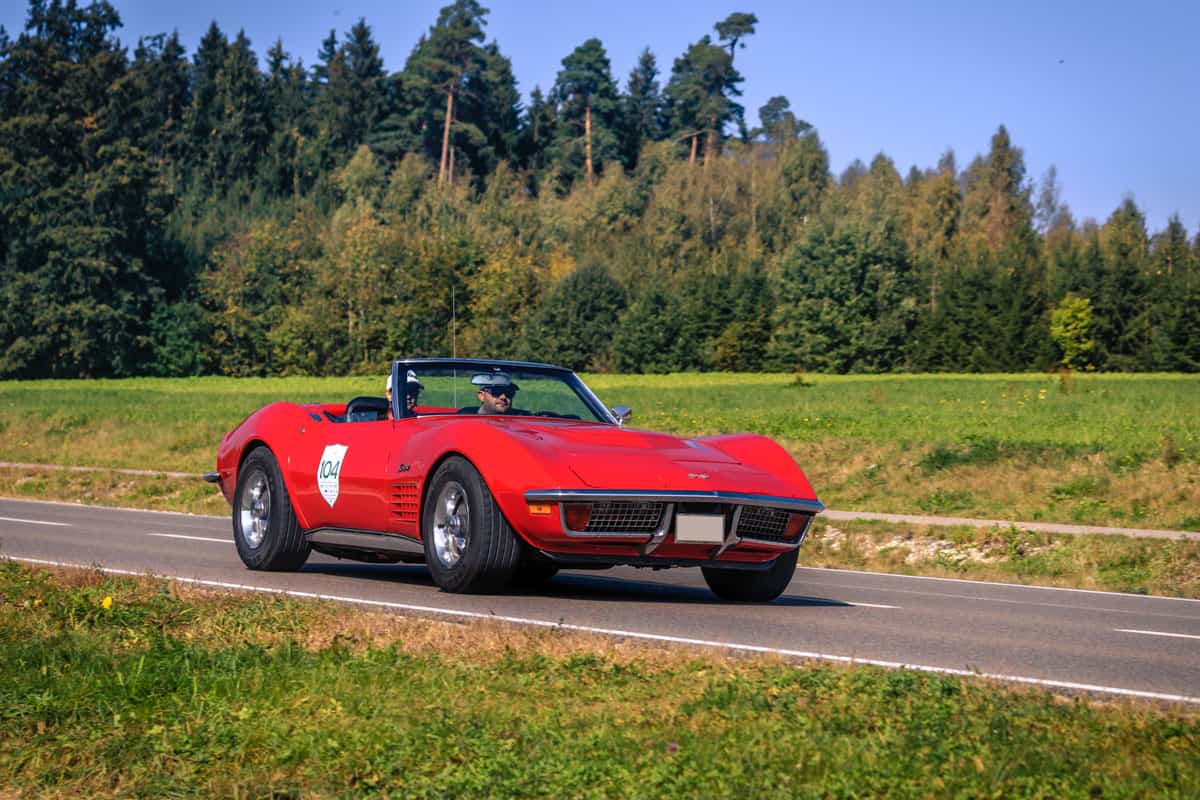 The Chevy 350 engine has a 4.0-inch bore and a 3.48-inch stroke. Its horsepower output depends on the year model and the make of the car that uses it. It can generate 145 to 370 horsepower. It has been rated to produce 380 pound-feet of torque, making it a great engine for towing.

Unfortunately, it has low fuel economy, and it was eventually discontinued in favor of engines that are more fuel-efficient beginning in 2004.

There are 14 models of the Chevy 350 engine. Among these, the LT-1 is the most well-known. It was used exclusively on Corvette and Camaro models between 1970 and 1972. It is considered the best of the Chevy small block V8 engines.

It initially had 260 horsepower in 1968. However, the introduction of stricter emission standards and rising demands for fuel economy drained the Buick 350 engine of its power. Its power dropped down to 150 horsepower by 1975. Despite this change, the Buick 350 was still used on some Jeep Wrangler models and Wagoneers.

It had two valves in each cylinder and a naturally aspirated two-barrel carburetor. It had an unusual bore of 3.8 inches and a stroke of 3.85 inches. This is unusual because bores are normally bigger than the stroke.

Automatic transmission is the standard partner of the Buick 350, although you can have a manual transmission with your Buick 350 if you prefer.

GM is known for putting its 350 engines in a wide range of models that they manufacture. The Rocket 350 V8, on the other hand, powered Oldsmobile models almost exclusively. The Rocket 350 V8 is a dependable 350 engine, although it suffered from a weak oil distribution system and a problematic valve train.

Oldsmobile focused on developing a powerful small-block V8. They were able to develop a small-block 330 V8 in 1964. Four years later, the Rocket 350 V8 was born.

What are the best upgrades to a Chevy 350?

The aftermarket industry that the Chevy 350 created was due to the sheer number of Chevy 350 engines that were manufactured and how easy it was to work on the engine.

Keep in mind that many of the upgrades to the Chevy 350 have the potential to break local laws regarding emissions or noise. Check your local regulations before making any modifications to your Chevy 350.

Installing larger headers on a stock Chevy 350 engine can increase the torque by 53 foot-pounds and add 16 horsepower. The headers are the weakness of the stock design of the original Chevy 350. Thus, modifying it should be the first thing that you’d do.

Either one of these two will push more air into the combustion chamber. If done properly, you can expect an increase of six to eight percent to the horsepower output per pound of boost on your Chevy 350.

A Chevy 350 with cast iron pistons can handle up to seven pounds per square inch. This can result in an almost 50% increase in the total horsepower output of your 350.

The LSx 1000HP Chevy Twin Turbo Turbocharger Kit for V8 engines is available on Amazon. Check it out through this link. 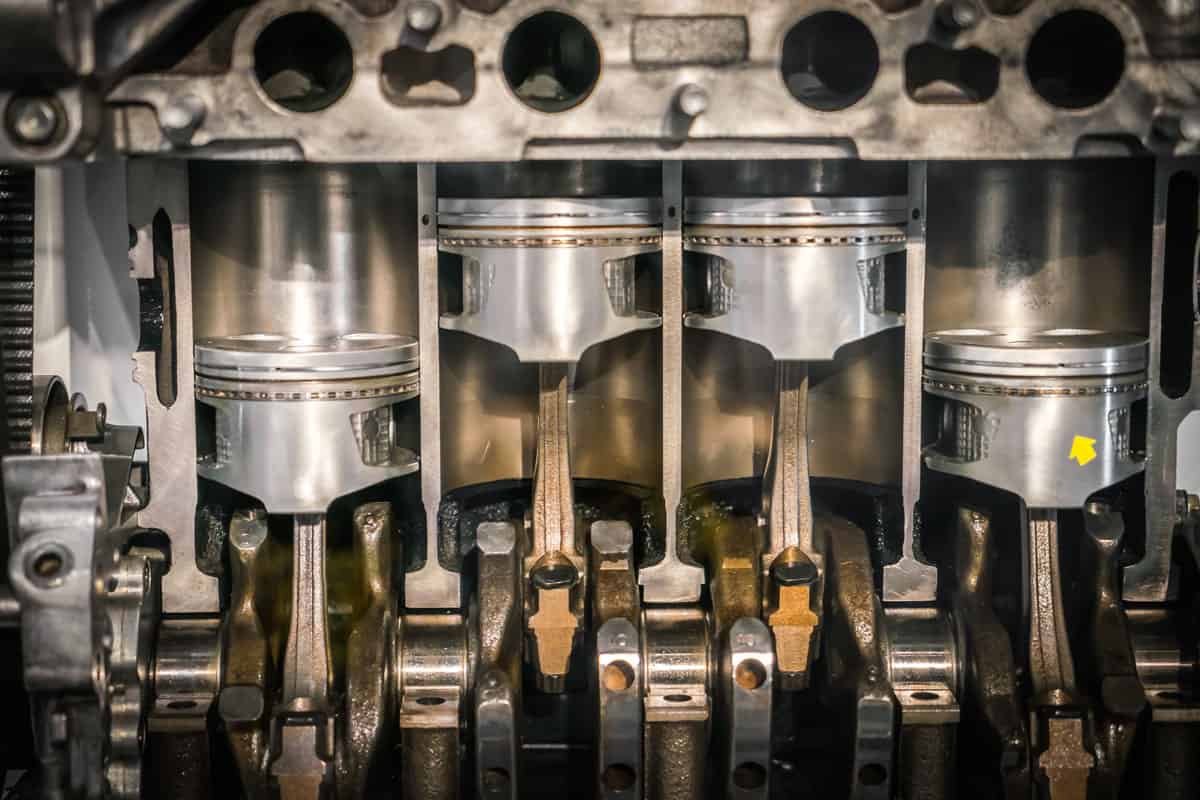 These pistons are preferred by car enthusiasts because they are more durable than stock pistons, and they can easily be customized to many different configurations.

Most cold air intake kits include a heat shield to prevent the warm air coming from the surface of your Chevy 350 engine from mixing with the cold air going into the air intake.

The SUPERFASTRACING 4-inch cold air intake system and heat shield replacement are available on Amazon. Check it out through this link.

Modified cylinder head configurations can increase the horsepower output and the performance of your Chevy 350. The bigger valves help improve fuel and airflow inside the engine, including specially designed intake and exhaust ports.

Alternatively, you can have a machine shop rebuild your existing heads. You can also have them polish the ports too. Rebuilding the cylinder heads and polishing the ports will not give you a lot of additional horsepower, but it is a lot cheaper. 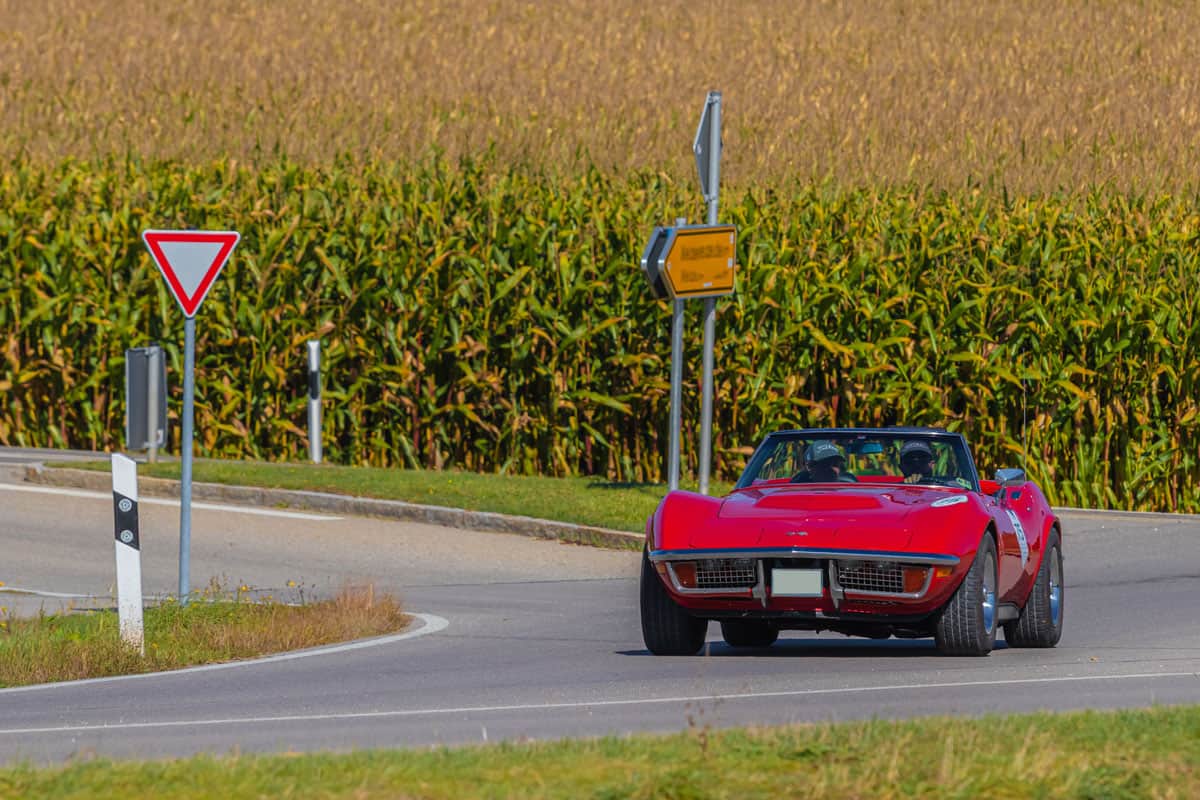 Many popular automobile manufacturers made their own version of the 350 engines during the height of the popularity of muscle cars. The weights of 350 engines varied a lot based on the design and the materials used in manufacturing the engine.