The Nissan NV is well-equipped with power and towing capabilities to help you get your job done. But sometimes, a heavy cargo van isn't the most effective. With so many trims and combinations of options like engine and roof type, knowing the weight of the NV is difficult. So, we researched all of these combinations to provide you with an answer here in this post.

A few factors like roof height, engine type, and trim affect the total weight of the Nissan NV. Here are the average weights of the various styles of Nissan NV:

Those are the averages of the total weights of the Nissan NV trims and combinations. But, there is more you need to know about the weight and functionality of each of these cargo vans. In the remainder of this post, we will discuss what goes into the weight of a cargo van, how much the NV can carry, how tall it is, and how it compares to its competition. 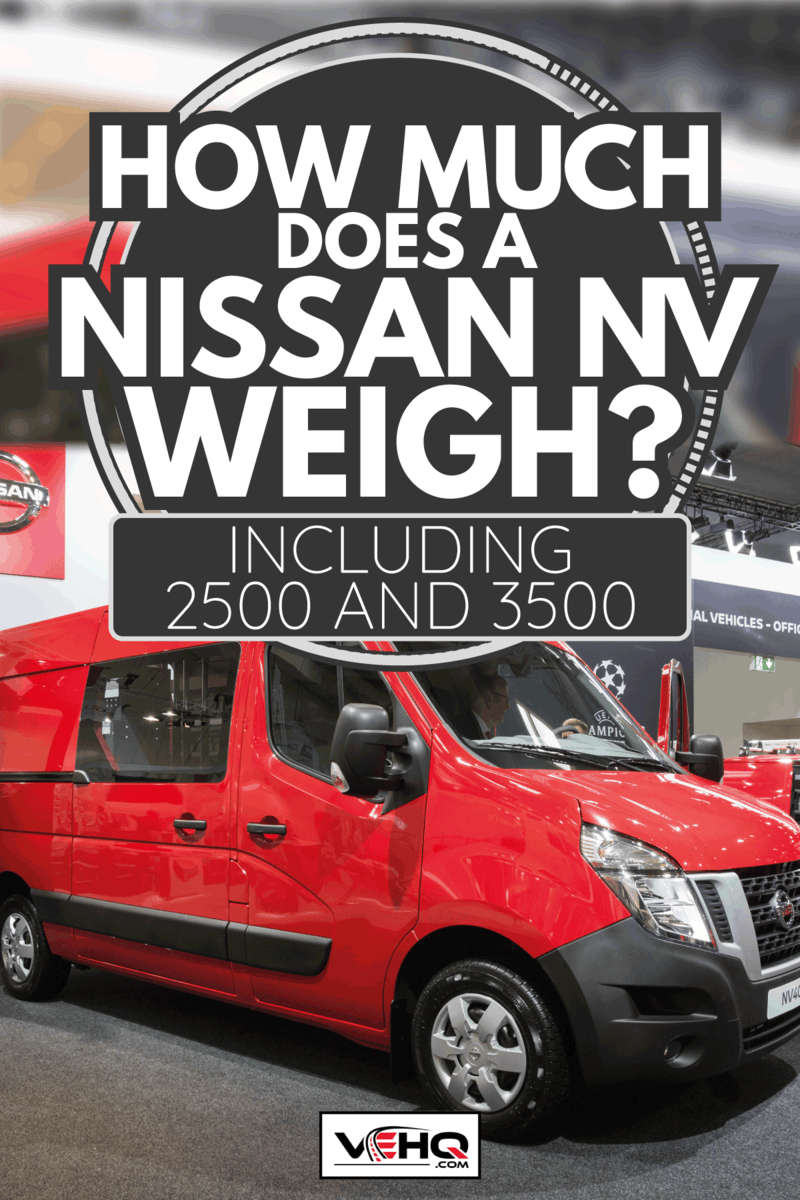 So, what affects the weight of the various trims of the Nissan NV? First, the roof type matters when it comes to weight. According to the Nissan website, two different types of rooves are available for the Nissan NV: standard and high. The higher roof option requires more materials for its construction, causing the overall weight of the cargo van to increase.

Next, the engine size is another factor in the weight calculation. The larger V8 engines weigh more than the V6 engines, which is reflected in the distributions of weights across the NV models.

Finally, the trim type or payload grade (1500, 2500, or 3500) will also affect the weight of the NV. The 1500 is lighter than the 2500, which is lighter than the largest of the three, the 3500. This is due to heavier grade equipment and materials used to increase payload capacity.

Weights of Every Trim of Nissan NV

Here is the complete breakdown of each Nissan NV's weight by trim, engine, and roof combination. All of this information comes from the NV specification page from Nissan's website.

How to Weigh your Nissan NV?

There are ways to calculate the weight of your car using a formula that revolves around the amount of pressure in each tire. Another way would be to drive your car to either a recycling center or a truck weight station. The attendants there may be willing to help you weigh your car.

But if you measure often, you might want to invest in a corner weight system that you can keep at home or in your work garage. These can be a little pricey, but they're a nice investment if you plan to get some use out of them.

Nissan NV vs. the Competitors - Which is Heavier

One of the best ways to get an idea of if the weight of the Nissan NV is a positive or a negative is to compare it to its competition. So, in this section, we will pit the NV against the Chevy Express, the Ford Transit, and the Mercedes-Benz Sprinter.

First, one of the premier competitors in the cargo van market is Chevy's Express van. According to the specifications page on Chevy's website, the Chevy Express has a curb weight of between 5,261 lbs. and 5,487 lbs. This is less than the weights we see with the Nissan NV, and the difference comes from the lack of a high roof.

Lastly, the Mercedes-Benz Sprinter might be the most well-known type of large van on the market. The Sprinter has many options, similar to the NV, including a high roof and an extended wheelbase. According to the Sprinter specs page, the cargo version weighs between 4,696 lbs. and 6,206 lbs.

How Tall is the Nissan NV?

Another factor that could potentially limit the usability of a cargo van like the Nissan NV is height. If the Nissan NV is too tall, it might not fit in certain garages or tight spaces on worksites. There are two height sizes of the Nissan NV, standard roof and high roof.

First, the standard roof models measure 83.9 inches (or 6.99 feet) high regardless of engine type or other features. On the other hand, the high roof models are much taller at 106 inches (or 8.83 feet) high.

The two types are very different in appearance and functionality. For example, the high roof model has plenty of room for the average person to stand up while the standard roof model does not.

How Much Weight Can a Nissan NV Carry?

A measurement called payload determines the amount of weight a vehicle, like a cargo van, can carry. Payload capacity counts everything that the van can carry on its frame in addition to the components already connected to the vehicle. The measurement includes people and physical cargo on the inside or outside (top) of the van.

Like the height, the payload capacity depends on the selection of options that build the NV. For example, the vans with the high roof and V8 engine options have the highest payload capacity of them all. Here is the full list of payload capacities for the Nissan NV according to the NV's specifications page:

The Nissan NV is not particularly heavier or any lighter than the other cargo vans on the market. Even if it's a little heavier than models like the Chevy Express, the extra weight allows the NV to have increased payload and towing capacities. If you're thinking about buying a Nissan NV but don't want something too heavy, take a closer look at the V6 models with standard roof size.