The malleability, durability, and availability of metal make it the top choice for car frames. But as we know, the number one enemy of car frames made out of metal is rust. For this article, we have researched and asked the experts how much frame rust is too much, and this is what we found out.

The rust on your frame is already too much if it has already reached the point where there are already holes because of the rust or some parts of the frames are already missing. This means that rust has penetrated your frame deeply.

Interested to learn more about rust on your frame? Continue reading as we discuss other related questions such as causes of rust, painting over rusted parts, prevention against rust, and more. Go ahead and continue reading! 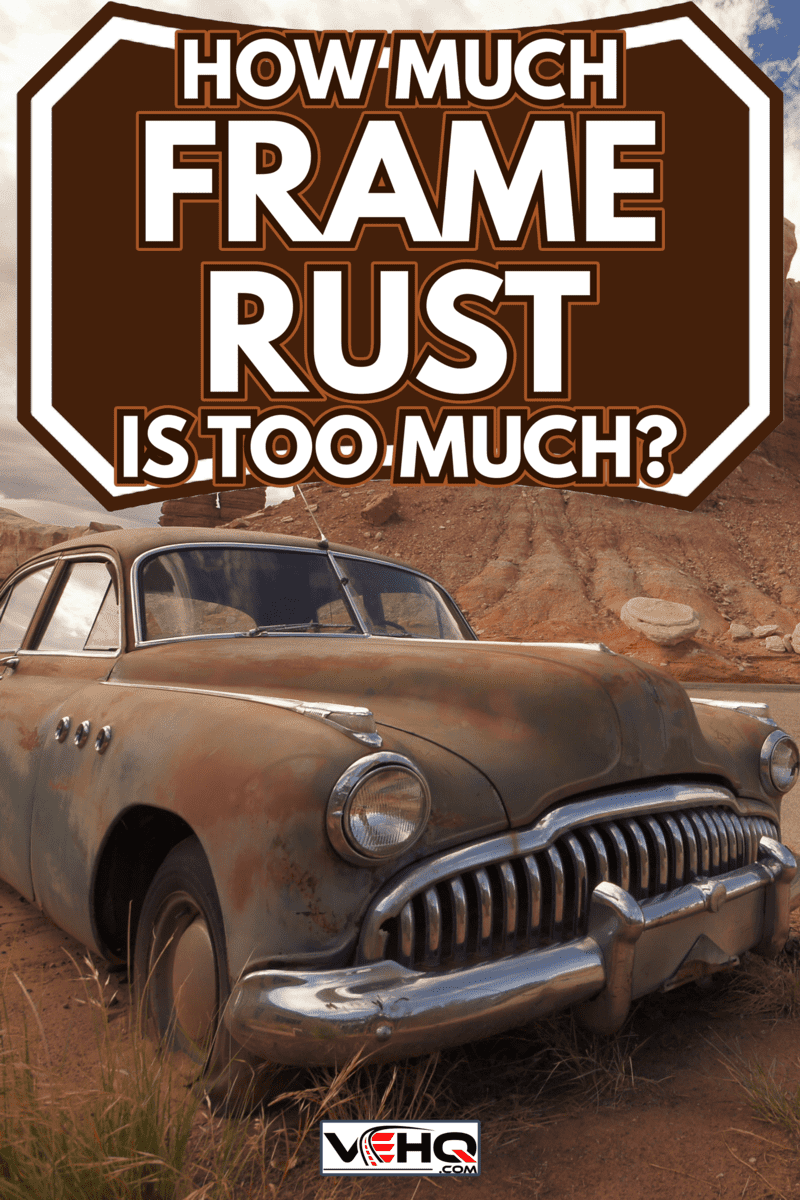 When should I worry about frame rust? [How to tell if rust is too much]

Rusting is normal, especially in cars that use frames and bodies that are made out of metal and not alloy. However, rust on your frames can have serious implications if left untreated.

When a metal rusts, it slowly thins down. Parts of its layers slowly turn brownish-red and becomes dust-like particles that make them brittle and weak. This process is called corrosion. Corrosion causes metal to lose its properties and revert it into something weaker and frail.

With rust, your main concern would be the integrity of your frame. A rusted frame would become more fragile and susceptible to damage; it would be as if your metal frame has turned into a glass frame.

In severe cases, holes through the frame can be spotted leading to the outside elements easily penetrating the interior of your vehicle.

Your frame also protects components of your vehicles, especially the under chassis as it is the one that usually experiences corrosion first. Untreated corroding frames can cause your vehicle to literally fall apart.

The overall aesthetic of your car will also suffer. A badly rusting frame may indicate that the vehicle is not well-maintained and could be a reflection of irresponsible ownership for others.

Rusty frames can also become a health hazard as they develop porous and sharp surfaces that can wound you, which can then later escalate to tetanus if the wound is significant.

If you can chip away parts of your frame, then you should start worrying about it as it can spread to other parts of your car's body.

The usual places where you can see the rust are on your fenders and under your car. This is because they are the ones that are constantly getting wet and have the most contact with the elements on the road. 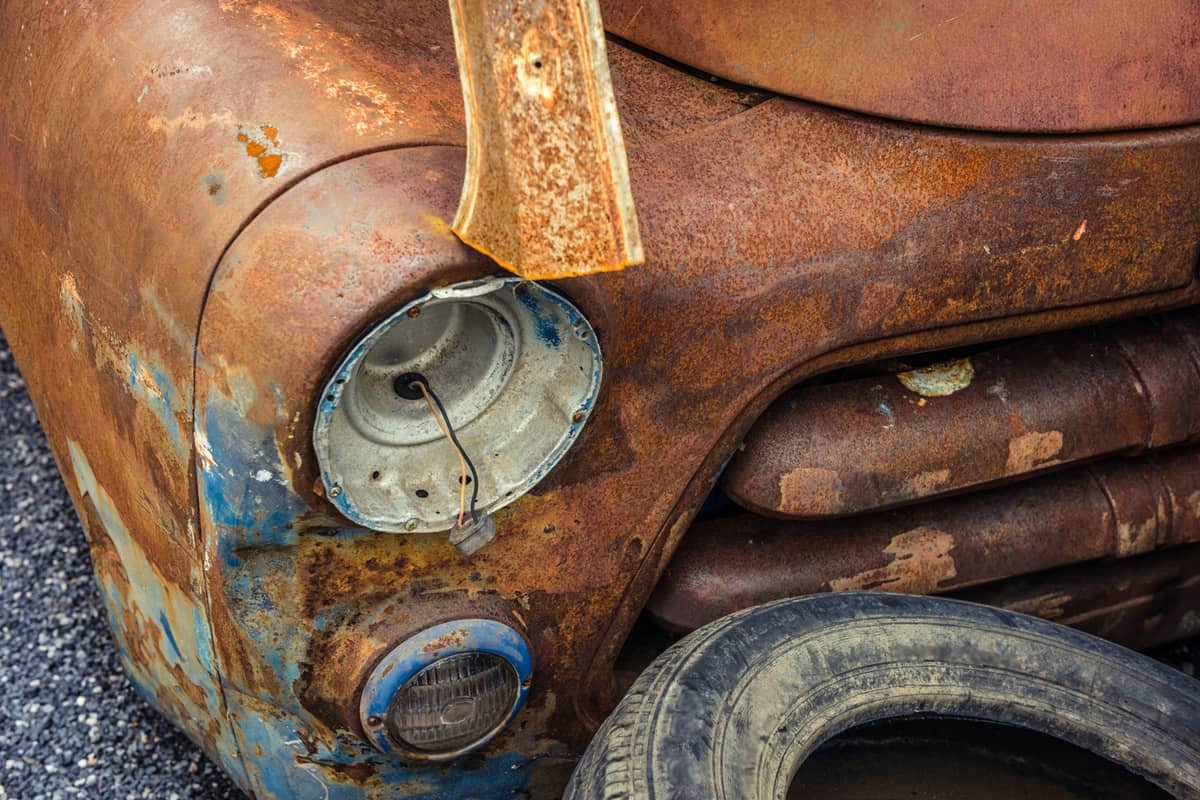 There are many contributory factors as to why vehicle frames rust.

One possibility is the age of the vehicle. As the vehicle ages, the paint protecting the frame and other layers fades because of the constant weathering of time. Over the years the effects of oxidation take place and cause rust in the frame.

Another one is the materials used for the frame. An example of this is the rust recall of Toyota on their trucks and SUVs in 2016. Rusting is common in older vehicles as the materials and technology used way back then are inferior compared to the ones used by car manufacturers today.

Your location also plays a role in why your frame can be more susceptible to damage due to rust.

People that live near the ocean can expect their vehicles to be more prone to rusting. This is because saltwater corrodes metal five times faster. The constant wind coming from the sea directly brings elements that can rust metal as if you have dipped it in seawater.

Another factor that can cause rusting is the location where you are parking.

If you are only parking your vehicle in an open space, then it is likely to rust faster compared to those who park their cars under a roof or a garage. This is due to the constant exposure to the outside elements, especially if you don't use your vehicle for quite some time.

Untreated cracks and dents, especially near your fenders, can also cause rusting. This is especially true if there is already a break in the surface of the paint and coatings. These cracks can easily be penetrated by moisture and water, and can easily cause rusting on your metal frame.

Can a rusty frame be saved? 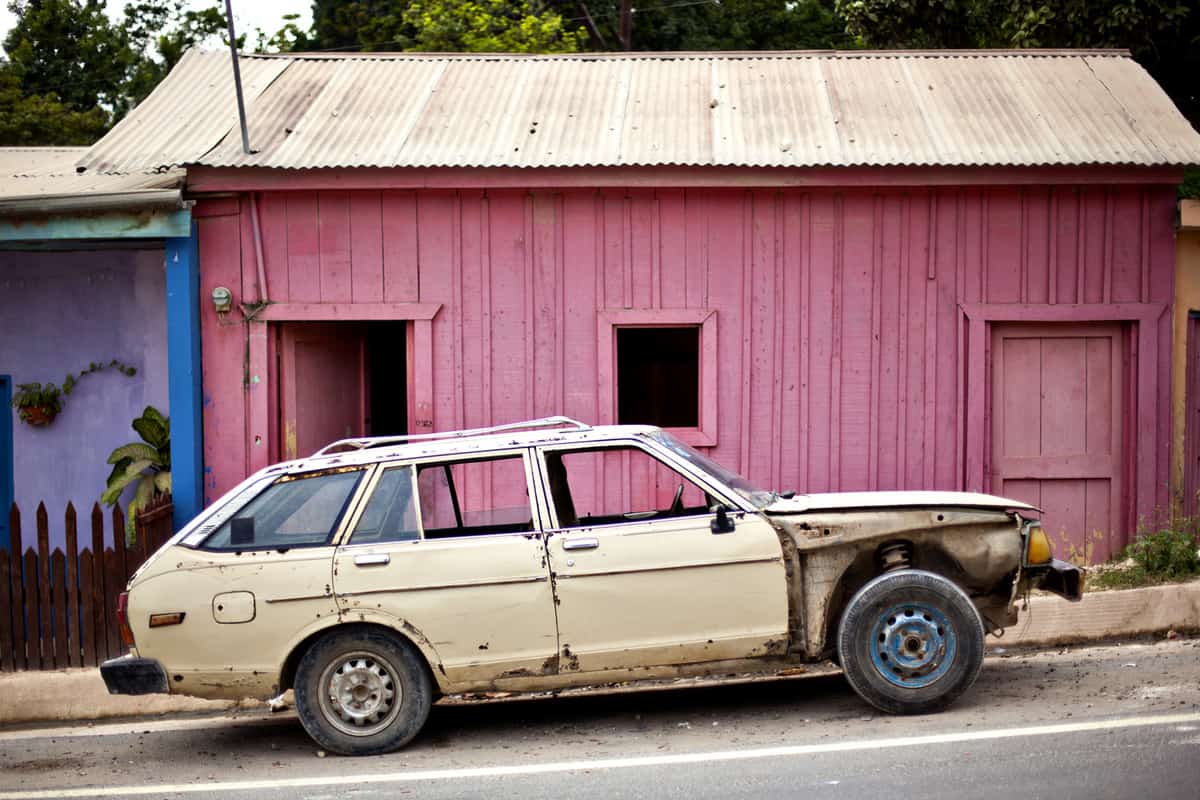 This heavily depends on the amount of rust that the frame has. Some restoration jobs can work wonders in saving what seems to be an unsavable frame.

These are done in special projects and rehabilitation where some completely rotten out parts are replaced by patching the whole. Epoxy, fiberglass, and another piece of similar metal are used to carry out this job.

Although it is possible, it can be quite expensive when your car has already reached a certain point. It is best to address the rust issues on your car frame while it is still early on.

The average cost of having your frame repaired from rust ranges from about $50-$100, of course, this still depends on how big the rust is, your location, and other repairs that you would like to be done to your frame.

Will painting over rust stop it?

Absolutely. Painting over rust can stop it, as long as the specific part has not been eaten deeply by the rust. Paint acts as a shield from moisture and prevents the spread of rust in your frame.

Although you would have to sand the rust out first on the specific portions that rust has already developed. This also allows you to know how deep the rust has already penetrated the frame. It will also tell you if the frame already needs to be patched. 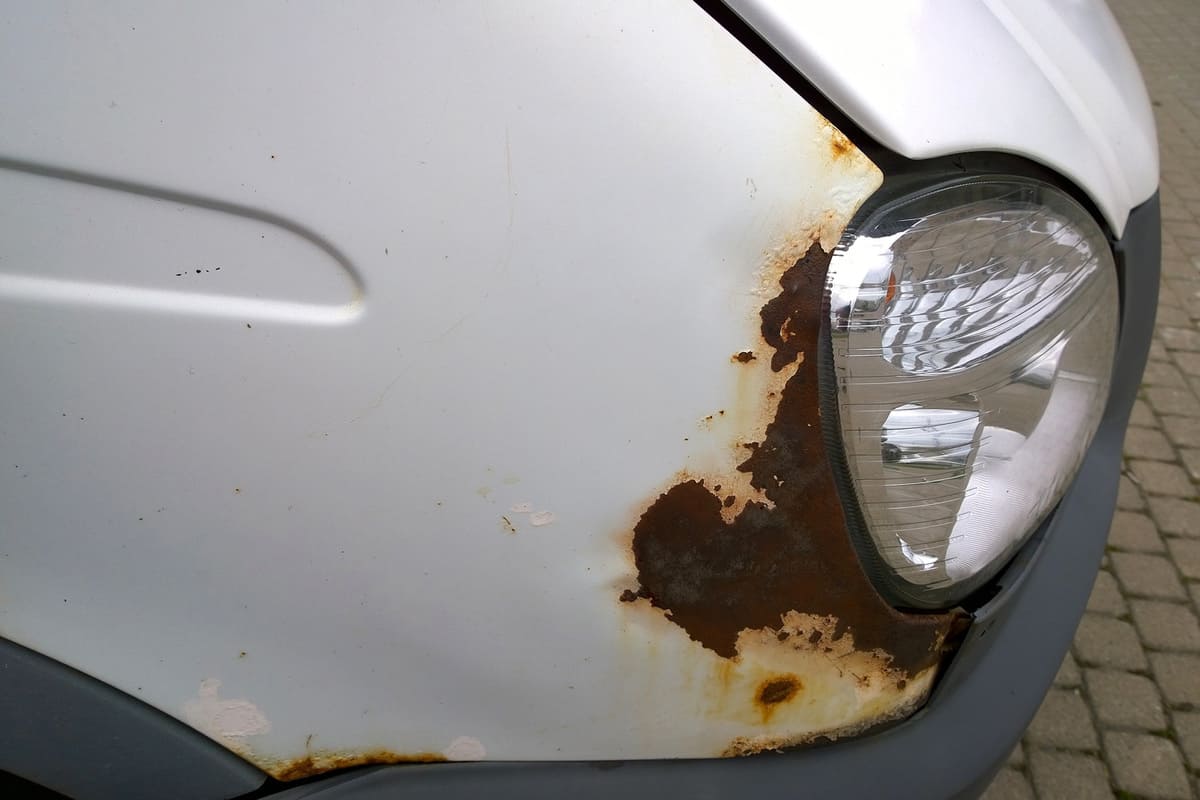 How long will a rusted frame last?

It really hinges on how bad the rusting is already. A badly rusted frame with multiple holes on it will not last that long, especially if you are in a place where it is constantly raining or snowing. The protection that it has against the elements is almost zero.

But if the rust is still on the surface and has not penetrated through the body. Restoring it and patching can help make it seem brand new and last you for many more years to come.

That is why it is imperative to not let the frame reach that point. If you are browsing for a car in the used market, have a mechanic run a thorough inspection of the car, especially if you do see some rusting on the frame already. Here you can have a diagnosis on whether or not the frame is still good or you should avoid it already.

Yes, WD-40 is one great piece of hardware equipment that prevents rust on metal tools and objects. In fact, it claims one to two years of blocking rust and corrosion on tools stored indoors.

For car frames, WD-40 is usually used as a lubricant in moving metal parts. It helps in making sure that when these metal parts get in contact with each other, they run smoothly. It also prevents unnecessary friction that can cause damage and irritating noises.

Click to see this set of WD-40 on Amazon

Rust is not a viral infection that can be spread through contact. As we discussed earlier, it is caused by the oxidation of iron. This is then activated by a variety of scenarios and happenings.

You need not worry if you have hit your car against a rusty pole or rail, the rust from those metals will not transfer to your frame. Contact has nothing to do with the occurrence of rusting, but rather oxidation. 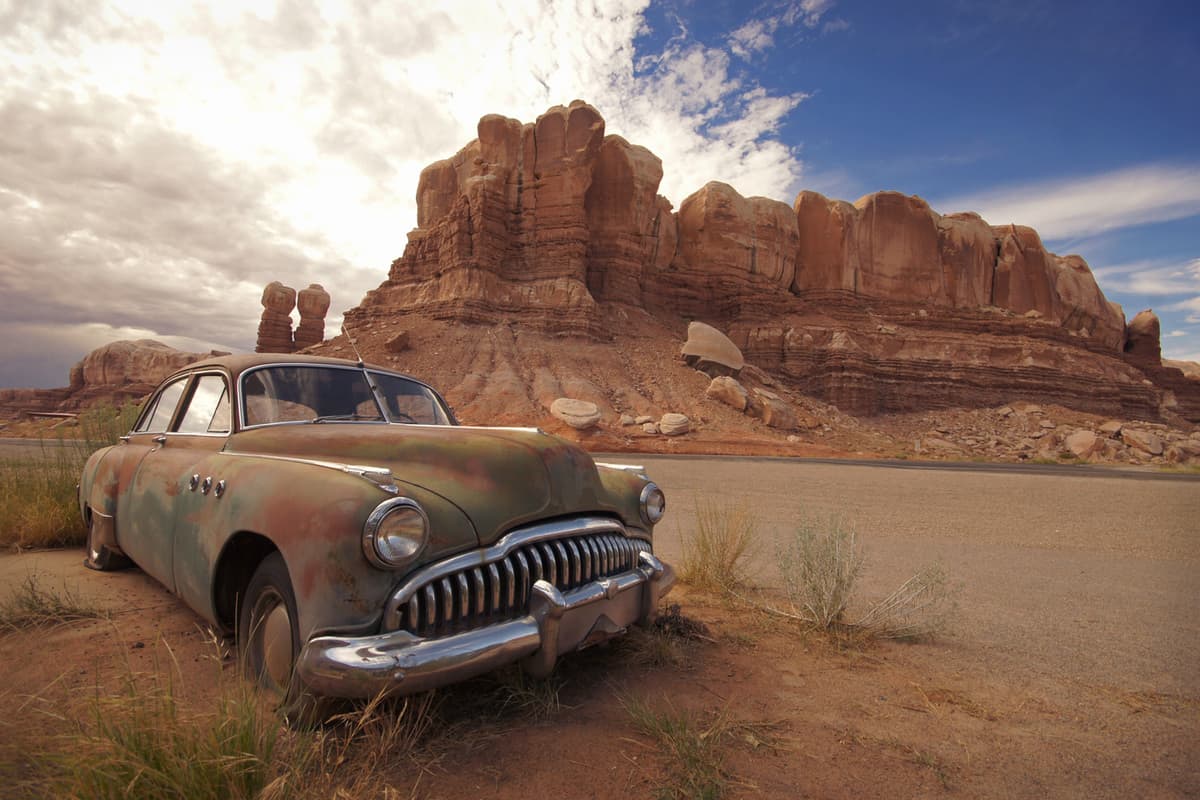 Holes on your frame are a clear indicator that rust has already gotten the best of your frame and you need to handle it. Otherwise, rust will eat up your frame.

Rust is not only aesthetically damaging but also a health risk. You can get wounded from rusty frames which may cause tetanus. This can be deadly if you are not vaccinated against it. Rust is a major problem on car frames and it's best to take action against it as soon as possible.

If you are not sure or don't know how to properly evaluate or solve the problem, then the best course of action is to have a mechanic check the condition of the frame.

Here are some related articles on this topic:

How To Patch A Rust Hole In A Truck Bed

How To Protect The Underside Of A Car From Rust

Why Do Cars Rust? (And How To Fix That)